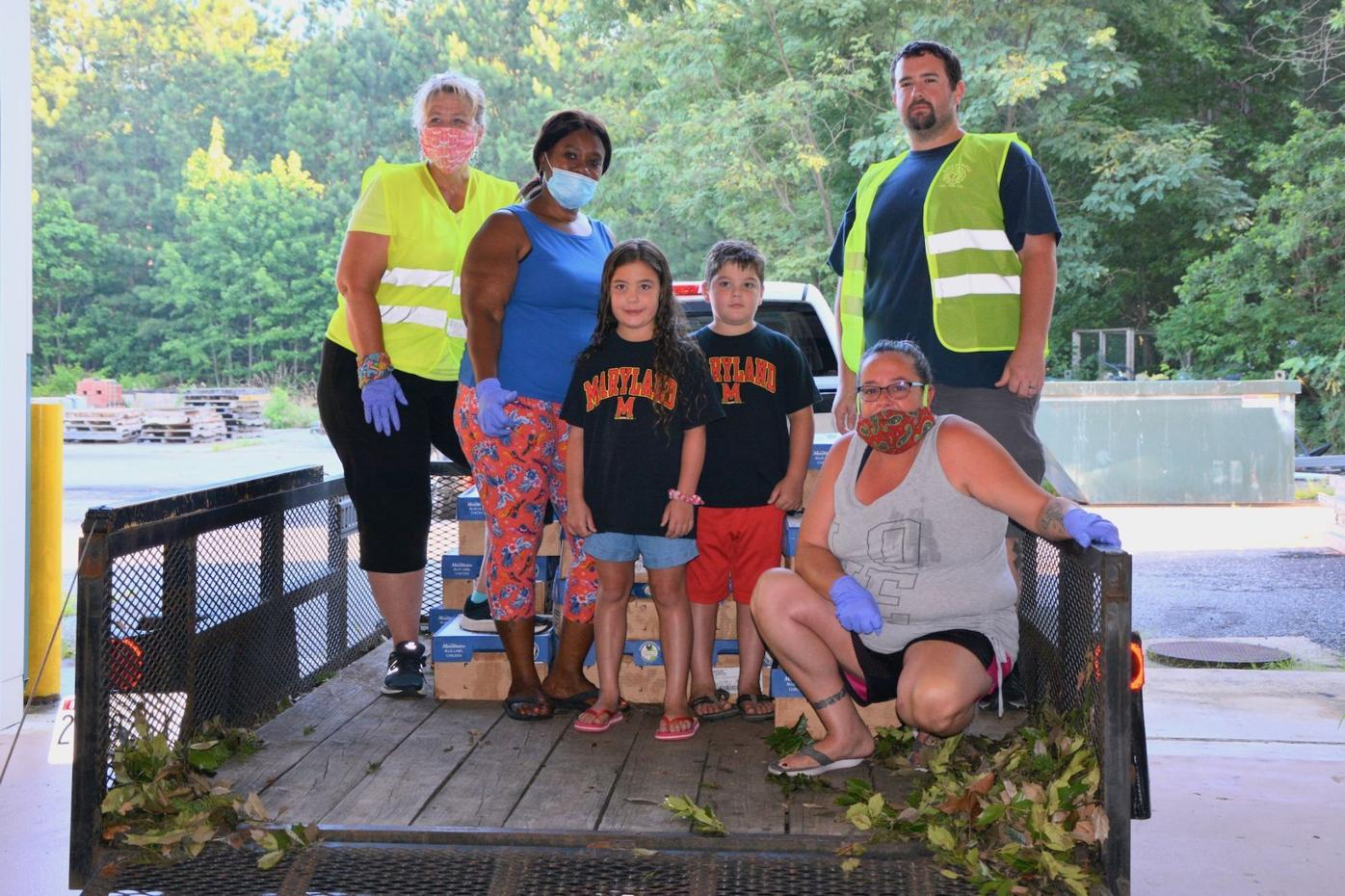 Twins Layla and Liam Perry of Rock Hall each purchased a 40-pound case of chicken quarters to benefit the Social Action Community for Racial Justice’s initiative to feed area seniors who are low-income, homebound or need help meeting their nutritional needs. The chicken was delivered Saturday, July 18 to the Rock Hall Volunteer Fire Company. From left are RHVFC member Becca Bigelow, whose social media posts expanded the fundraiser to benefit the SACRJ; Cece Wilson, a member of the SACRJ’s steering committee; 7-year-old twins Layla and Liam Perry; Matt Dowling, deputy chief of the RHVFC; and Tammy Rose of the SACRJ. 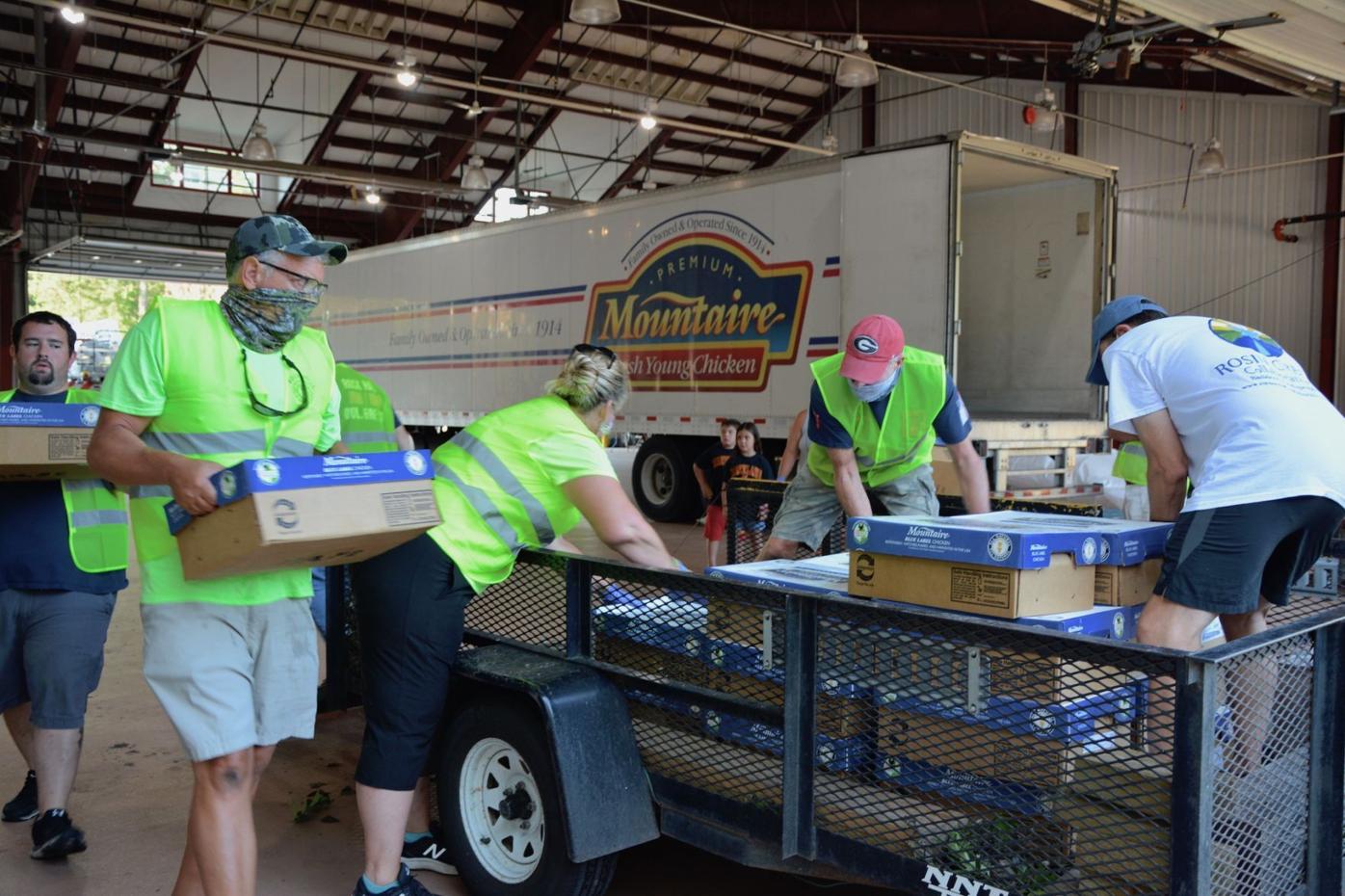 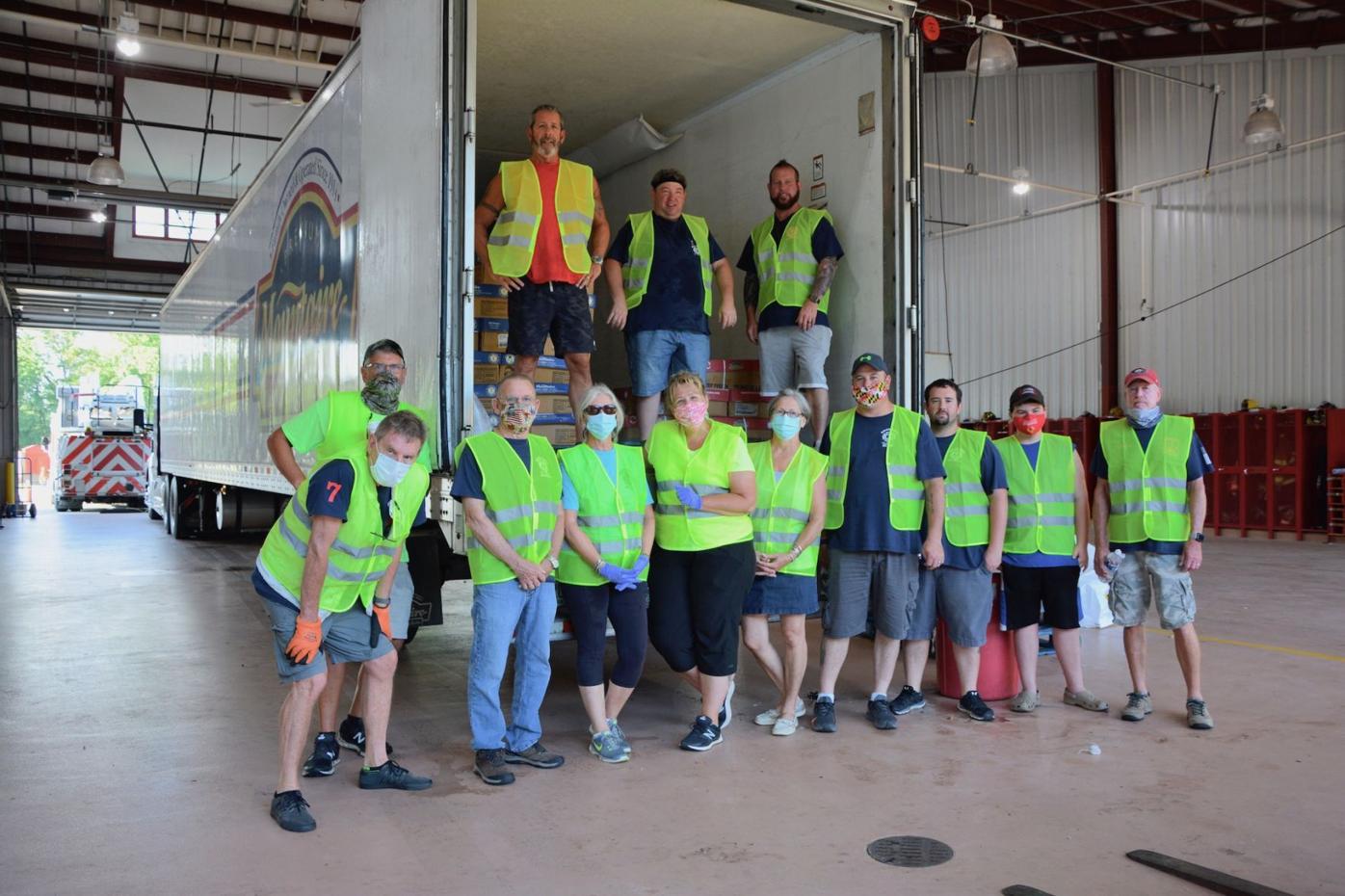 Twins Layla and Liam Perry of Rock Hall each purchased a 40-pound case of chicken quarters to benefit the Social Action Community for Racial Justice’s initiative to feed area seniors who are low-income, homebound or need help meeting their nutritional needs. The chicken was delivered Saturday, July 18 to the Rock Hall Volunteer Fire Company. From left are RHVFC member Becca Bigelow, whose social media posts expanded the fundraiser to benefit the SACRJ; Cece Wilson, a member of the SACRJ’s steering committee; 7-year-old twins Layla and Liam Perry; Matt Dowling, deputy chief of the RHVFC; and Tammy Rose of the SACRJ.

ROCK HALL — There was a lot going on Saturday morning at the firehouse here, where volunteers had arrived as early as 5:30 a.m. to set up for delivery of 11½ tons of chicken sold as a fundraiser.

Four bays had to be cleared of all fire trucks to make room for a tractor-trailer from Delaware-based Mountaire Farms.

R.J. Dowling, president of the Rock Hall Volunteer Fire Company, operated a forklift that moved pallet after pallet of 40-pound cases of chicken breasts and leg quarters that other fire company members loaded into awaiting vehicles.

Despite all this hustle and bustle, it was difficult to overlook Layla and Liam Perry of Rock Hall, accompanied by their mother Jessica.

Wearing flip-flops, shorts and identical University of Maryland T-shirts, the 7-year-old Perry twins were at the firehouse shortly after 7 a.m. to see what a community coming together for a good cause looks like.

Using allowance money they earned helping their father Justin, a waterman, Layla and Liam each had purchased a case of fresh leg quarters as a donation to the Social Action Committee for Racial Justice’s feeding the elderly initiative.

When Jessica Perry suggested that her young son and daughter pool their money and buy one $20 case of chicken, Layla and Liam, who are rising second-graders at Rock Hall Elementary School, opted to each buy a case.

Jessica and Justin Perry each donated a case, too.

All told, 109 cases of leg quarters were donated to the SACRJ’s program that provides food to Kent County seniors who are low-income, housebound or need help meeting their nutritional needs.

She added: “I hope all the families who contributed realize what a huge impact their contributions will make in the lives of our elderly neighbors. I am profoundly grateful for this outpouring of love and support.”

Becca Bigelow, an EMT for 20 years with the Rock Hall fire company and a third grade teacher at RHES, should be credited for coming up with the idea of using the fundraiser as a way to help the SACRJ. She used social media to challenge friends to “sponsor” a case, and said she’d make the first donation.

“All you have to do is write the check to RHVFC. Ordering and delivery will be taken care of for you,” Bigelow wrote on her Facebook page.

Bigelow said 27 of her Facebook “friends” — from Maryland, Delaware and Pennsylvania — shared her post. One of them was Jessica Perry.

Over the final week of the June 18-July 13 sale, after it was decided that orders could be paid for with a credit card, the number of donated cases soared from 30 to more than 100, according to Bigelow.

“This went way beyond my expectations. If I had gotten 10 cases donated, I would have been thrilled,” Bigelow said in a telephone interview Monday morning.

“I never dreamed it would become this,” she said.

Bigelow is a lifelong Kent County resident and has been employed by the public school system here since 1999, the last 12 years as a teacher.

Of the SACRJ’s feeding the elderly initiative, she said, “I think what they’re doing is amazing. And it’s so needed. There are a lot of seniors living on a fixed income, having to choose between paying for food or medicine ... falling through the cracks.”

Bigelow said the worthiness of the cause and the significant savings offered — $20 for a 40-pound case of leg quarters breaks down to 50 cents per pound — were the primary reasons so much chicken was donated.

“The easy part is that it was $20,” she said. “I know some people who hardly had that much to give, but they did because they wanted to help.”

Lining up all those donations was only part of the story.

Volunteers with the Social Action Committee, including steering committee member Philip Dutton, trucked the 2 tons of chicken to the American Legion post in Chestertown, the current base of operations for the SACRJ’s food program.

From there, over the next three and a half hours, another set of SACRJ volunteers led by Cece Wilson, Tammy Rose and Lain Hawkridge painstakingly separated the chicken — two leg quarters in each resealable clear plastic bag — and then repacked the cases.

Then, the 109 cases were loaded onto a pickup truck and trailer provided by Jay Yerkes and transported to Washington College, where Prince Johnson, director of dining services, had arranged for the food to be stored in the college’s freezers.

Lee, in a phone interview Monday, said the donated chicken will stretch the funding earmarked for protein (hamburger, fish, shrimp, pork) by 10 weeks. She said this will allow the feeding the elderly program, which is headed up by Wilson, Rose and Mary Jordan, to purchase other proteins that might be somewhat more expensive.

This is the 20th week of the SACRJ’s feeding the elderly program, which averages about 200 households a week. More than 330 individuals have been served overall, Lee said.