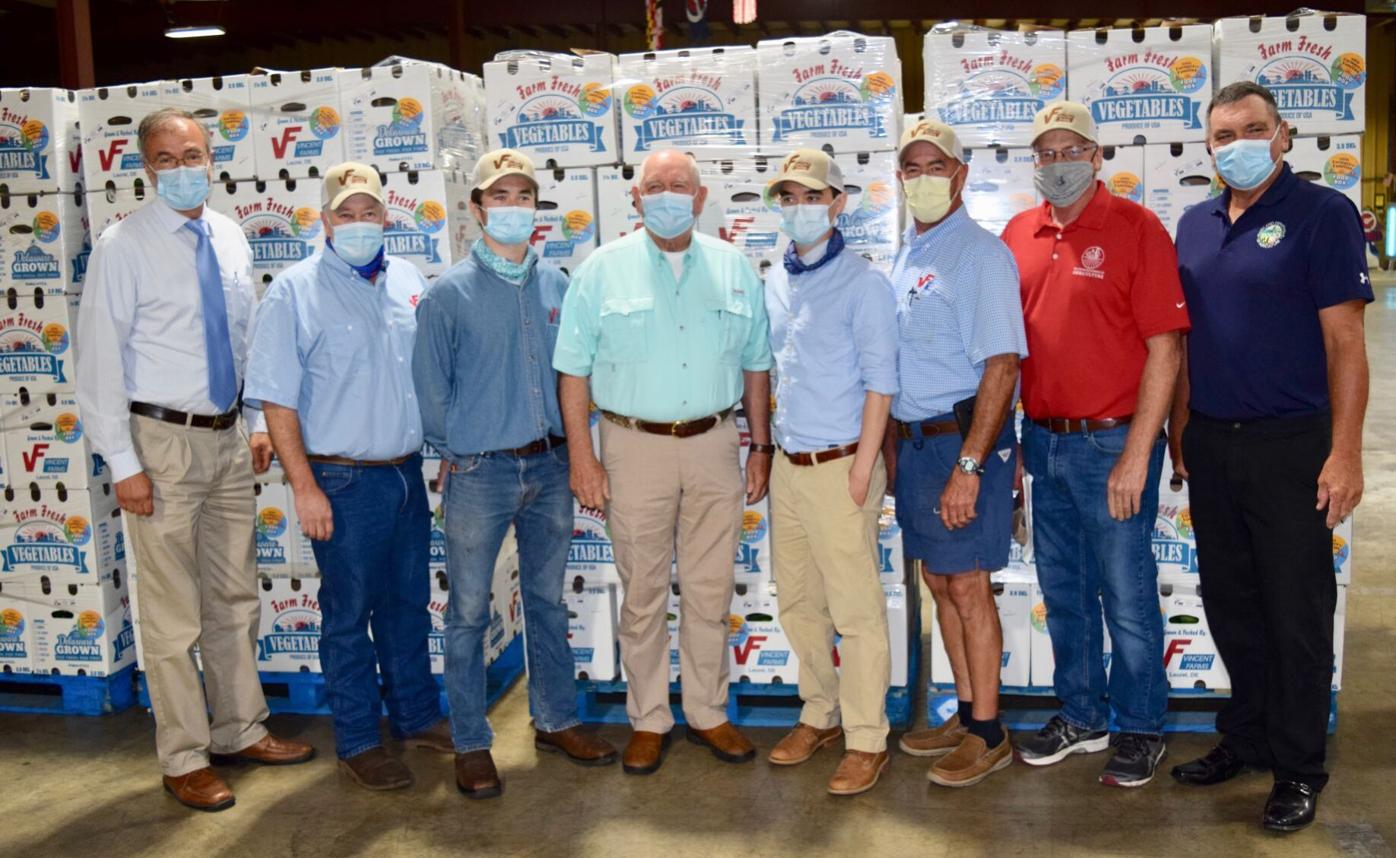 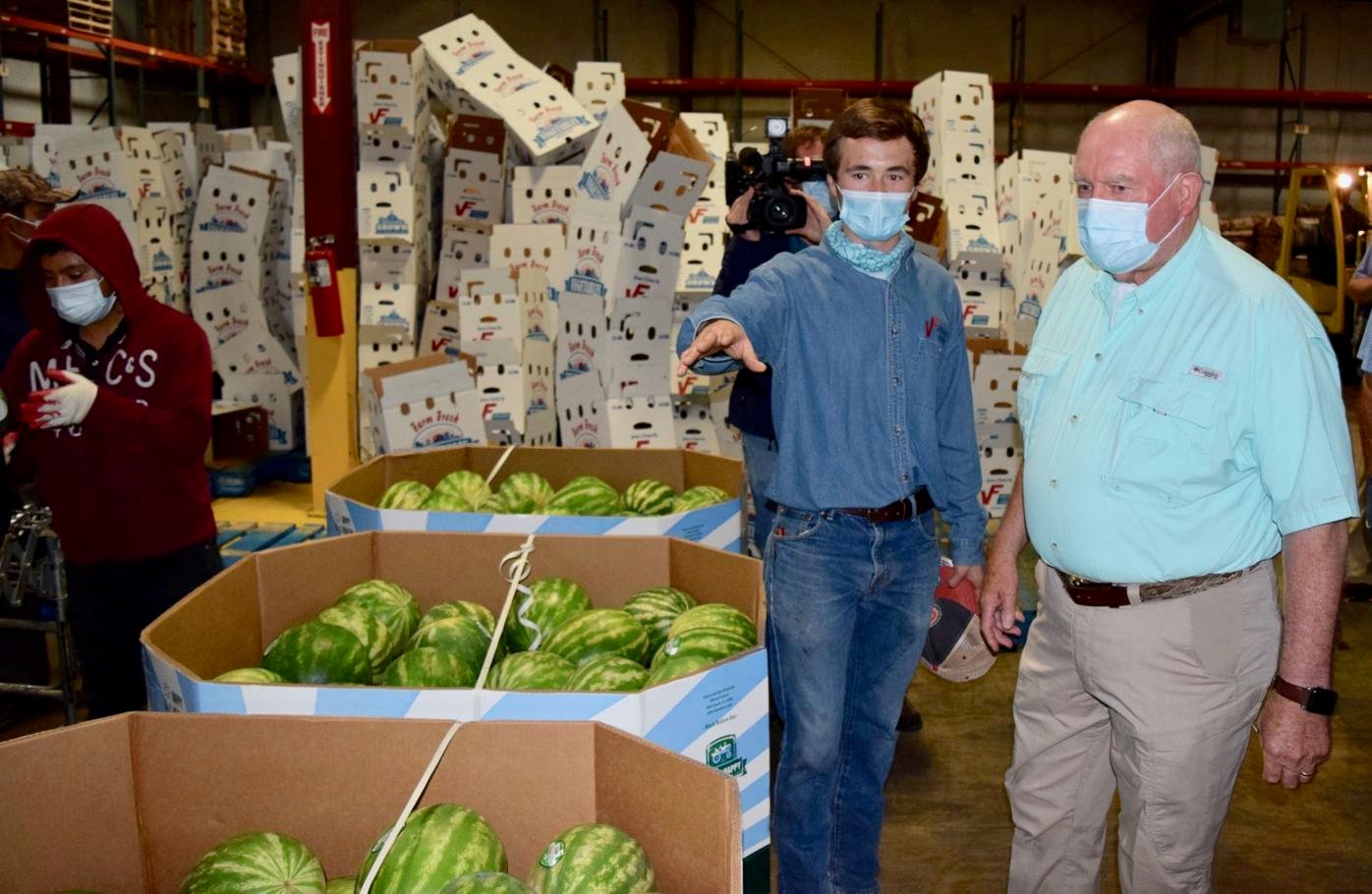 Vincent Farms’ Nathaniel Vincent leads U.S. Secretary of Agriculture Sonny Perdue on a tour of the Choptank Transport facility in use for the U.S. Department of Agriculture Farmers to Families Food Box program.

Vincent Farms’ Nathaniel Vincent leads U.S. Secretary of Agriculture Sonny Perdue on a tour of the Choptank Transport facility in use for the U.S. Department of Agriculture Farmers to Families Food Box program.

The warehouse is being used for the U.S. Department of Agriculture’s Farmers to Families Food Box Program. Produce from Laurel, Del.-based Vincent Farms was going in the boxes. Several representatives from the farm led Perdue on a tour of the facility.

Perdue left with a good impression of the facility and the information Nathaniel Vincent gave him on the farm’s production.

“Very impressive, seeing this Eastern Shore produce going to good uses, the great program from the producers and farmers, as well as the logistics people in the middle, and then certainly the charitable groups distributing,” Perdue said. “This is what America does best, in my opinion. It’s really meeting needs, certainly, from a vital commodity like food to people who need it. I know these farmers here, Vincent Farms and others, are really proud that their produce is being able to go to people who need it in other parts of the country.”

The produce at the Choptank Transport facility is grown at Vincent Farms in Delaware, then transported to Preston, where it’s packed into the boxes.

Perdue previously visited the Teddy Bear Fresh Produce facility in Easton on June 5 in support of the same program. He said since then, the program has progressed significantly.

“(We’ve delivered) 50 million boxes. I think we were probably in the 20 million the last time I was here,” Perdue said. “So you can see how quickly it’s grown and we just celebrated recently our 50 millionth box. And that’s a lot of food for people who (need it). It’s inspiring.”

Initially, the USDA received $1.2 billion in funding for the program, which was intended to cover 40 million boxes. The funding has since increased to $3 billion.

The program came together quickly when producers and growers grew anxious about supply chain disruptions during the COVID-19 pandemic. As videos circulated of farmers plowing under vegetables and having large amounts of excess produce, President Donald Trump told Perdue to come up with a solution fast.

Working with the USDA, the program developed in less than 30 days. Perdue and Harris agreed that a fast timeline is a rarity at the federal level.

“I’m really proud of our USDA career people that came in and designed this program,” Perdue said. “(A) congressman knows a federal procurement program like this usually takes 12 to 18 months. They did this in three weeks because that’s where people were going hungry, they were out of a job, they needed it. And that’s when they needed it. It didn’t do any good 12 months from now.”

“This is a win-win-win. Everybody wins by this program,” Harris said. “What we’re seeing nationally, of course, as some places begin to reclose their restaurants, is the supply chain still needs to be supported. Obviously, here on the Eastern Shore, agriculture’s incredibly important for the communities. The communities win, our famers win, and obviously the recipients of the food win as well. So this is just a great program. I hope we keep this program going right up until we’re out of this crisis.”