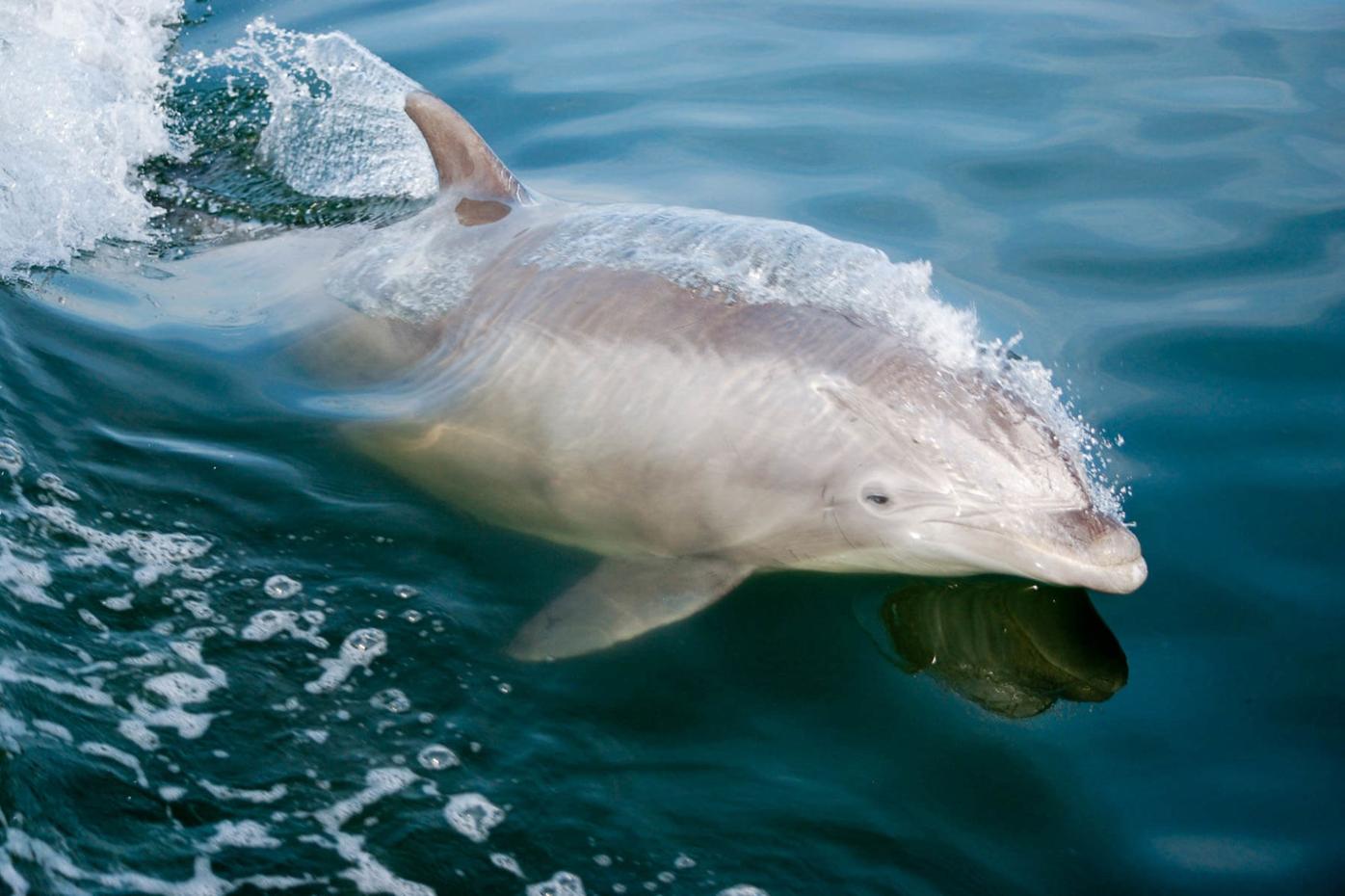 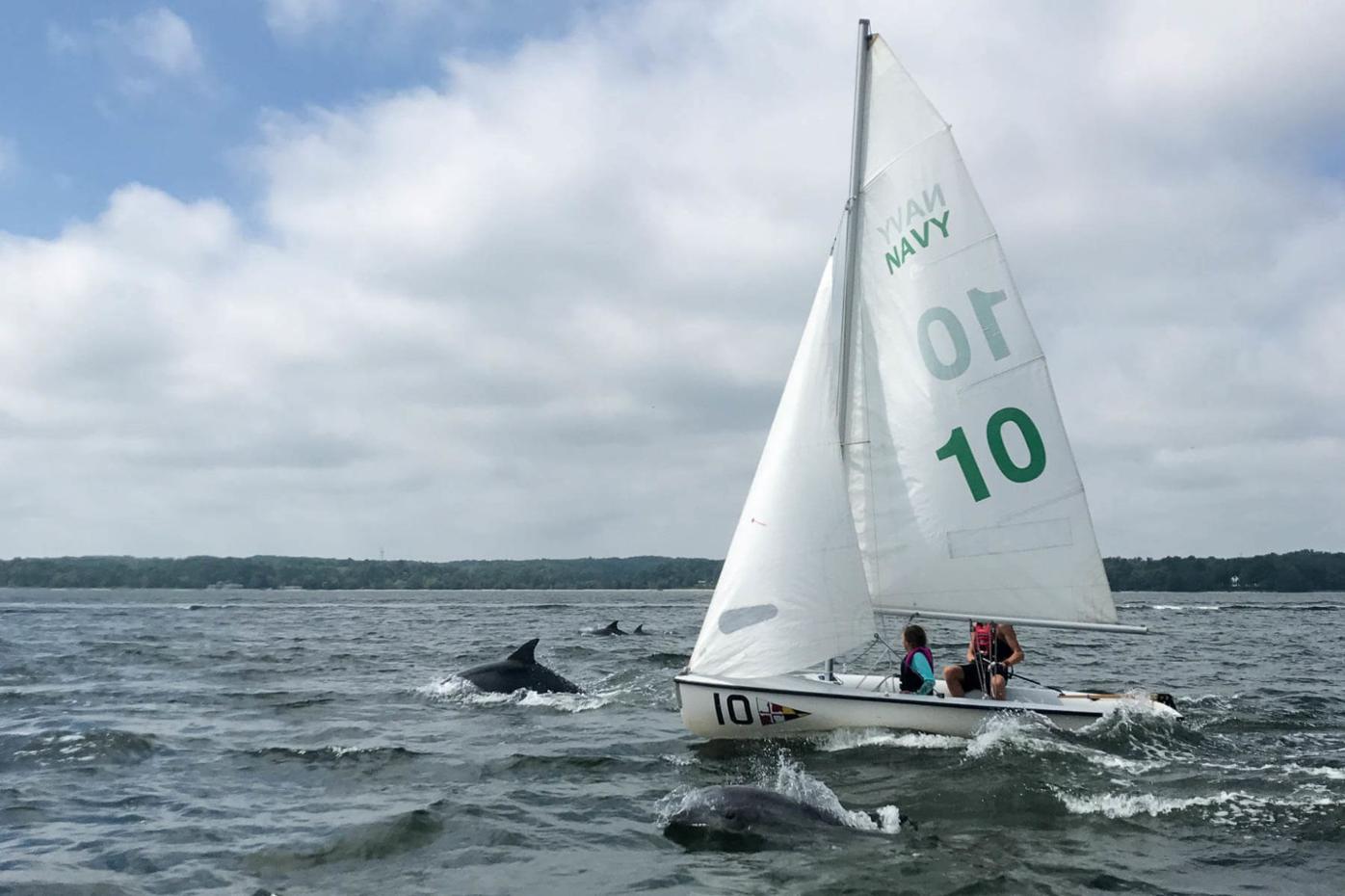 Dolphins will come in near sailboats and powerboats, as seen in this photo by Jeff Varnon, courtesy of the Chesapeake Bay Foundation..

Dolphins will come in near sailboats and powerboats, as seen in this photo by Jeff Varnon, courtesy of the Chesapeake Bay Foundation..

EASTON — A number of bottlenose dolphins have been sighted this summer in the Chesapeake Bay from the Miles River to the Potomac.

“You see 30 or 40 in a pod. When we see dolphin, we know the Bay is healthy. They are chasing bait,” said Capt. Josh Cooper of 13 Mile Fishing Charter in St. Michaels. He said that he sees them in the Miles River and out in Prospect Bay.

“There are dolphins off Virginia to New Jersey in the summer and moving further south to North Carolina in the winter,” said Dr. Helen Bailey, research associate professor at the University of Maryland Center for Environmental Science in Cambridge.

Besides feeding, “the dolphins are having their young and feeding,” Bailey said.

The increasing number of dolphins in the Bay is “a sign of water quality,” said Capt. Rob Newberry, chairman of the Delmarva Fisheries Association, Inc., a trade organization based in Chestertown. “Dolphins are the canary of the Bay — they won’t tolerate bad water.”

Bailey said the presence of dolphins “might be a sign of cleaner water. It could also be an increase in food, with healthier fish stocks leading to more dolphins occurring in the Chesapeake Bay. The fish that dolphins prey on will also benefit from cleaner water. You are what you eat,” she said.

“They won’t compete for human food,” Newberry said. “They know if you have hooked a fish. They push the hooked fish up to the back of the boat. Dolphin are a waterman’s friend. You hear stories of shipwrecks and the dolphins show up to help the humans.”

Boaters who see dolphins can get in touch with Dolphin Watch.

“Citizen scientists can view and report dolphin sightings on our Chesapeake DolphinWatch mobile app (available free on Google Play and the Apple app store). There is information on responsible wildlife viewing guidelines in the app. Citizen scientists can also learn more about the Chesapeake DolphinWatch project and our findings from last year’s sightings at www.umces.edu/dolphinwatch,” Bailey said.

“We are starting to estimate the number of individual dolphins present in the Bay based on their signature whistles (names), but that work is still in progress,” Bailey said. “The best estimate at the moment is from our collaborators at the Potomac-Chesapeake Dolphin project conducting photo-IDs of dorsal fins who have identified about 1,000 dolphins at the mouth of the Potomac River,” Bailey said. That information is available at http://www.pcdolphinproject.org/research.

“There are several contributing factors to consider when looking at the number of sightings in a particular season, including number of visitors near the water to report, favorable ecological conditions that support more prey for dolphins to feed on, and/or a true increase due to the recovery of the dolphin population as a result of wildlife protection laws,” said Jennifer Dittmar, director of animal rescue at the National Aquarium in Baltimore.

Anecdotally, people seem to be seeing more dolphins this summer.

“There were none last year, but this year we see them every trip,” Cooper said. “When we see them, we will take five or ten minutes and try to get them to cruise on the side of the boat.”

“One time we were fishing in two or three feet of water and all of a sudden, 20 dolphin went right through there. It was pretty impressive,” he said.