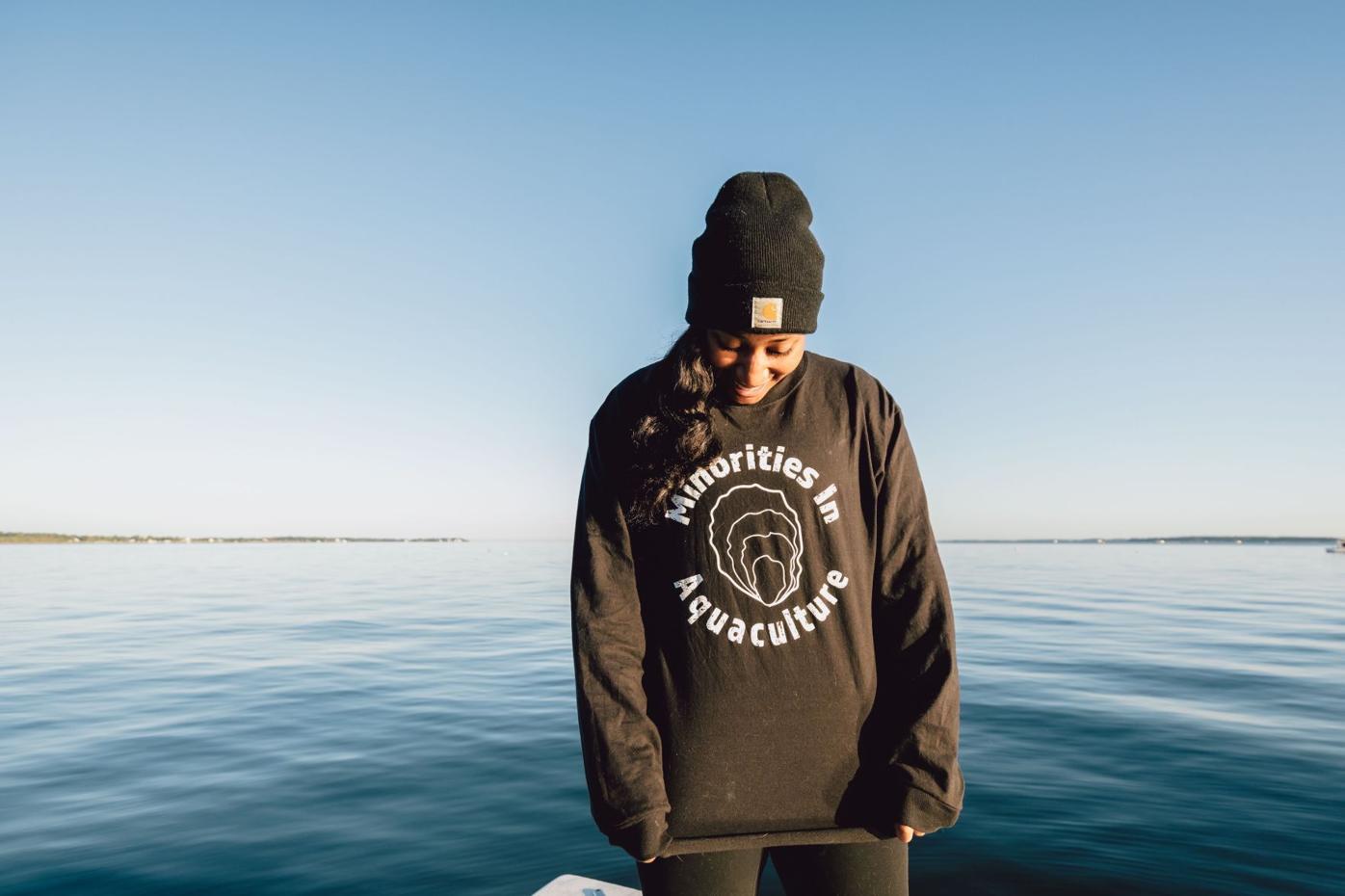 Imani Black is making room for minorities in aquaculture with her program to help provide opportunities to more young women of color. 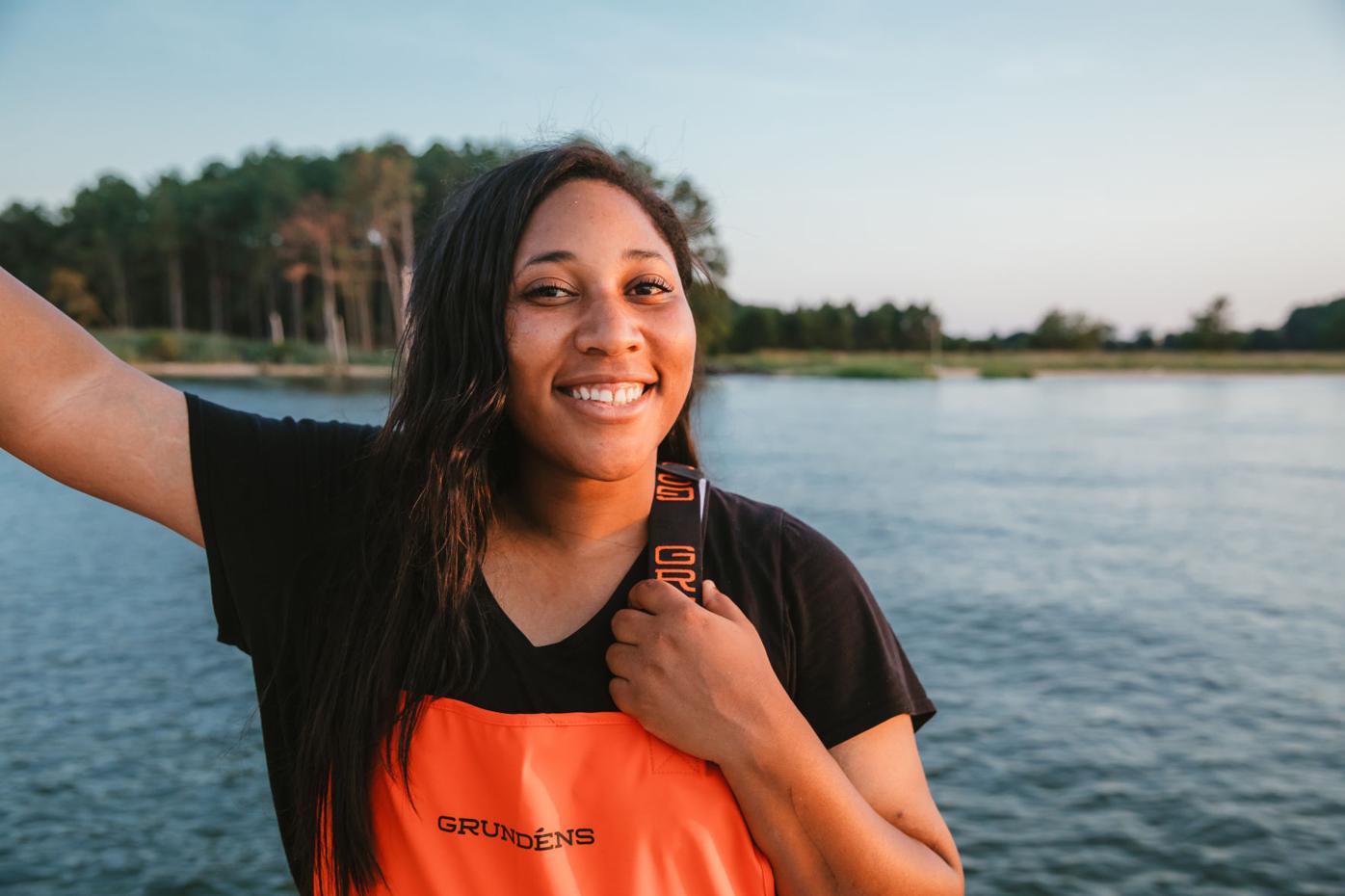 Imani Black enjoys spending her days on the water and sharing her love of the industry.

Imani Black is making room for minorities in aquaculture with her program to help provide opportunities to more young women of color.

Imani Black enjoys spending her days on the water and sharing her love of the industry.

CAMBRIDGE — While African Americans have a long and rich history in the evolution of the Chesapeake Bay’s seafood industry, most of their stories, hardships, and accomplishments were scarcely recorded by white society.

A graduate of Queen Anne's County High School, Black received her four-year degree in Marine Biology from Old Dominion University in Norfolk, VA. Now she is working as a Faculty Research Assistant (FRA) at University of Maryland's Environmental Science Center's Horn Point Laboratory in Cambridge, MD. Since May of 2020, Black has been primarily working on her nonprofit Minorities In Aquaculture (MIA), an organization dedicated to bringing more women specifically African American women into the male dominated field of aquaculture. Now in addition to running the organization, in Fall 2021, she will be starting the Marine Estuarine Environmental Sciences Graduate Program also at Horn Point.

To say Black is immersed in her task would be an understatement. She is incredibly passionate about her field and continually strives to learn as many facets of the aquaculture industry as she can.

When Black first began this journey, she said she didn't know it would look quite like this. Using the skills she has acquired she is using her connections and relationships within the aquaculture industry to cultivate partnerships to aid in her mission to create hands on aquaculture programs, mentorships and internships opportunities for women of color to promote diversity and inclusion as an essential to this industry.

“We believe that by educating minority women about the restorative and sustainability benefits provided by local and global aquaculture, we can create a more diverse, inclusive aquaculture industry,” Black said.

Black’s journey in the field began as an intern at the Chesapeake Bay Foundation’s oyster restoration program. While interning at CBF, she found her passion, realizing she loved oyster restoration. Black knew she wanted to pursue a career that allowed her to work on the water. The spring semester of her senior year at ODU, Black completed Virginia Institute of Marine Science’s Oyster Aquaculture Training Program (OAT) which is a six-month hands-on program about the various stages of shellfish production and Virginia's seafood industry. This program was the true kickstart to her career in shellfish aquaculture. Over her career, Black has worked for oyster hatcheries and farms along the eastern shores of Virginia and Maryland. From 2018 to May of 2020 she was the Assistant Hatchery Manager for the Hoopers Island Oyster Company's (HIOC) hatchery facility and assisted with their nursery and farm as well during peak seasons.

Oyster farming is Black's niche — Her organization Minorities In Aquaculture (MIA)'s mission is to identify, mentor and support other women of color that are interested in the commercial aquaculture industry — so far she may be the only identified active African American female oyster farmer from Maryland to Texas, and she doesn't take that lightly.

Black's interests are vast and multidimensional. In college, she began studying tropical biology specifically working with sea urchins. Recently, in her quest to learn all facets of the aquaculture industry, Black journeyed to Hudson, NY where she interned for Hudson Valley Fish Farms, the largest steelhead fish farm operation on the East Coast in preparation for the proposed salmon farm coming to Caroline County. Black said, "It's not only important to me to be knowledgeable and understand the various facets of commercial aquaculture, but the salmon farm has the ability to present numerous opportunities for minorities. I never want to limited my organization's efforts or reach based on my own experiences and career path. MIA is space for women to step into door of this field and have the opportunity to explore something different whiling have support and resources to cultivate success in aquaculture on their own terms." “There are a lot of possibilities out there – the sky is the limit on the spaces that minorities can impact and contribute to. I want to be knowledgeable of the many opportunities for us in different sectors,” she said.

Black said having grown up in a coastal community and having her family but especially her father who is really into fishing in addition to friends who boated help lead to her marine interest. “In third grade I went to a marine science camp at Horn Point, and knew that's what I wanted to do,” Black said. In college she thought her focus would be tropical biology, but her internship in Virginia solidified her love for the bay. “That group of bosses, leaders — all women — who were really knowledgeable of oysters and bay restoration,” are what affirmed Black's belief this is exactly what she was meant to do and where she could do the most good for the environment.

Her main focus is now continuing to grow her organization by connecting with her local community and younger women of color to expose them to aquaculture, oyster farming specifically — which is so critical to the bay — not only as a sector of revenue, but also to the replenishment of wild oyster population, Black said.

I'm just trying to create an empowering and supportive space so black students can have the opportunity to explore this area and know that aquaculture and working on the Bay is a possible career choice , she said. In marine science, especially in aquaculture there is very limited presence of people of color in most sectors.

Giving kids options is a great thing, Black said, it is a misfortune to allow 17-year-olds to decide their whole life at that age, without knowing fully what their choices are. Black credits having to navigate through the Division 1 lacrosse recruiting process with giving her opportunities she would not have otherwise been offered and is supportive of giving high school and even younger students education of trades and different industries early on, with representation and role models of other people of color in those fields.

Black's nonprofit Minorities in Aquaculture was inspired by other organizations also striving to bring diversity into their respected areas of marine sciences. Organizations like Minorities in Shark Science, Black by Nature, Blacks in Marine Sciences, Outdoor Afro and many more she said, have encouraged her to take affirmative action to close that gap in her field.

“I'm honored to be able to participate [in closing the gap], and I have this sense of responsibility to not only be an educator, but also the biggest advocate and protector of this space,” Black said, “I don't want diversity and inclusion to be just buzzwords anymore. The issue of diversity in environmental/marine spaces has been a topic of discussion for decades and yet, there are still fields and opportunities that lack diversity and minority presence. The environment and our efforts to persevere, conserve and restore it are far too important for all members of our community, regardless of race not to be involved. I want it to be real in practice, not something we keep discussing but something we're actively trying to correct. ”

The field isn't limited to only the scientific aspect, but also needs people who are good at consulting and building hatcheries, or oyster cages, or even marketing — things that are needed to push shellfish growth forward in this era, she said.

Black spoke appreciatively of the faculty of UMCES's Horn Point Laboratory. Her advisor Dr. Matt Gray, President Mike Roman, Alyssa O'prey (Hatchery Manager of the Shellfish Aquaculture Innovation Lab (SAIL)) and other faculty members, have been incredibly supportive of the nonprofit and have made a space for her organization, and have been very open to exploring programs to incorporate Black's ideas into future projects for minority students.

Next on the horizon, Black is pursuing her captain's license. She recently learned from Admiral Vince Leggett and Captain Lamont Wright there are only ten African American active boat captains on the Chesapeake Bay, ranging from 50 to 93 years of age. When she acquires her license that will likely make her the youngest African American captain on the bay in present time.

Minorities In Aquaculture aims to create an empowering and supportive community that encourages and includes women of color.

If you are a woman of color who is currently pursing a career in aquaculture or aspire to, we welcome all that are interested to become a member. Join our network that will not only encourage you but provide great opportunities to learn about aquaculture and help restore our local and global seafood industries by diversify the aquaculture industry.