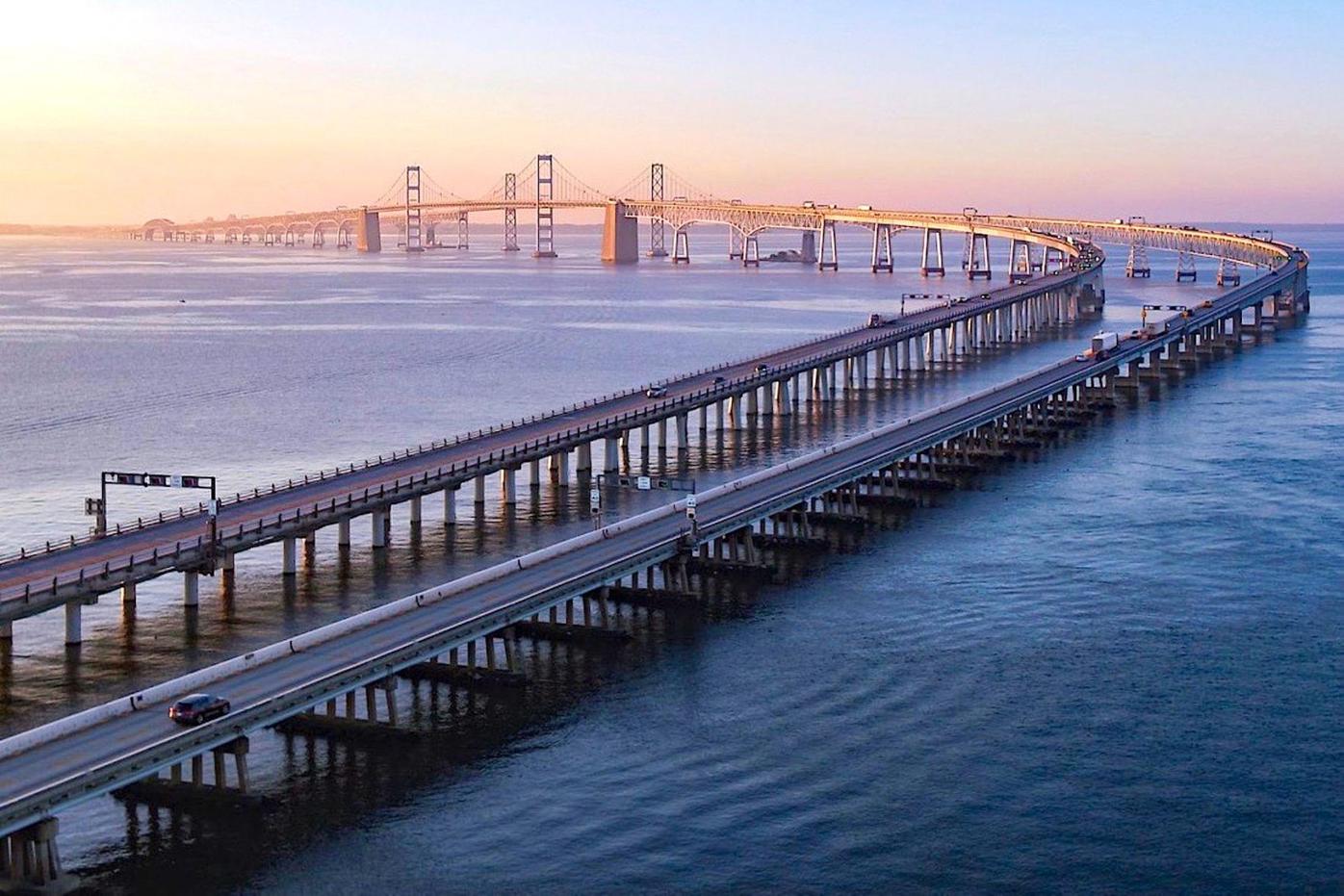 The latest report released as part of the Chesapeake Bay Crossing Study lists the site of the William Preston Lane Jr. Memorial (Bay) Bridge, seen here in a photo courtesy of the Maryland Transportation Authority, as perhaps the best option for a new bridge to help ease growing traffic congestion. 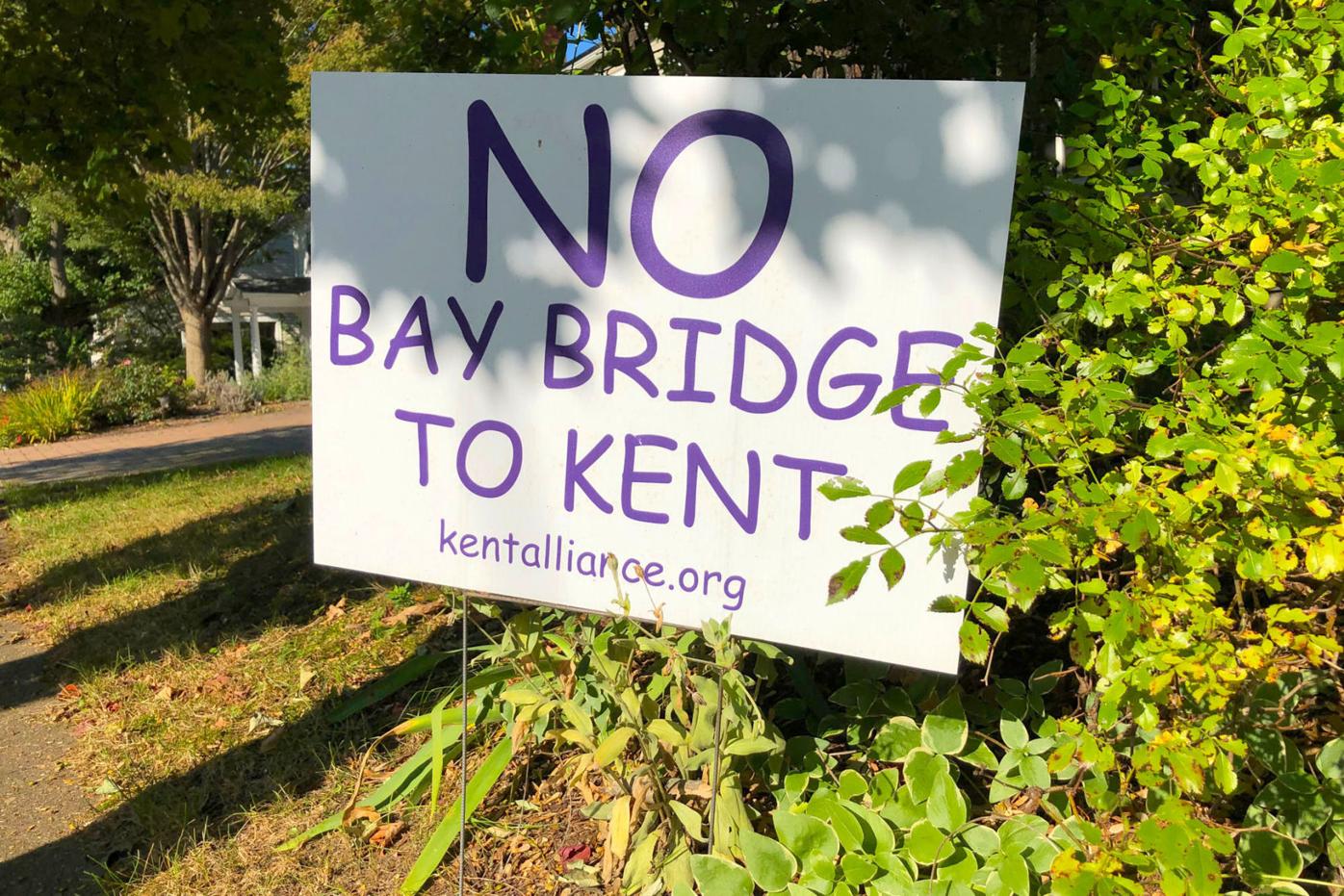 Signs opposing a Chesapeake Bay bridge into Kent County started going up when the state launched a study for a new crossing. Of the three corridors retained for study in the latest alternatives report, one would land just south of Rock Hall.

The latest report released as part of the Chesapeake Bay Crossing Study lists the site of the William Preston Lane Jr. Memorial (Bay) Bridge, seen here in a photo courtesy of the Maryland Transportation Authority, as perhaps the best option for a new bridge to help ease growing traffic congestion.

Signs opposing a Chesapeake Bay bridge into Kent County started going up when the state launched a study for a new crossing. Of the three corridors retained for study in the latest alternatives report, one would land just south of Rock Hall.

CHESTERTOWN — As the state’s lengthy process studying possible locations for a new Chesapeake Bay crossing continues, the latest report out of the effort retains four potential options for further review.

The alternatives report officially narrows 14 reviewed corridors down to the top three options. It also retains for further review the “no-build” option, which is just what its name says, while dismissing other potential traffic solutions like rail, bus and ferry service. Also out are various traffic management options, such as increased tolls at peak travel times.

The report states the existing twin spans of the William Preston Lane Jr. Memorial (Bay) Bridge are carrying increasing traffic volumes, with travel times expected to worsen through 2040 due to planned population and employment growth.

The initial 14 corridors studied covered 100 miles of the Bay north to south. The northernmost, corridor 1, crosses the Bay from Harford County to Cecil County. At the southern end, corridor 14 would go from St. Mary’s County to Somerset County.

Each potential route was evaluated on issues such as length, with special consideration for how much of a span would cross deep water; proximity to the current crossings; likeliness to divert traffic from the existing spans, especially in the event of maintenance work or an emergency; and connection to existing highway infrastructure, notably U.S. routes 50, 301 and 13 on the Shore.

“The traffic screening results show that corridor alternatives closer to the existing Bay Bridge would be more effective at diverting traffic from the existing Bridge to a new crossing,” the report states. “Thus, for most of the corridor alternatives, traffic congestion at the Bay Bridge would continue to worsen through 2040 even with a new crossing.”

With five potential corridors landing in Kent County, which was considered for the site of the first Bay Bridge decades ago, local residents campaigned against a crossing. Signs went up in yards throughout the county stating “No Bay Bridge to Kent.” Many of those signs are still up.

Four of those Kent County crossings have been nixed. The remaining Kent County route, corridor 6, starts in Pasadena in Anne Arundel County and lands just south of Rock Hall. It would then require a new bridge over the Chester River before finally connecting with Centreville.

Also retained is corridor 8, starting near Crofton in Anne Arundel County. It lands in Talbot County, where it would connect with Easton and U.S. Route 50.

The preferred alternative in the report is corridor 7, which would add a new crossing at the site of the current Bay Bridge. Gov. Larry Hogan previously voiced his support for this corridor.

“There is only one option I will ever accept: adding a third span to our existing Bay Bridge. While the federal process requires multiple proposals, the data is indisputable — this option would maximize congestion relief & minimize environmental impact,” Hogan said in a series of tweets last year.

According to the report, federal study requirements call for more than one corridor be retained for further evaluation. So those conducting the study will continue to review corridors 6, 7 and 8, as well as the no-build option “as a baseline for comparison.”

The Kent Conservation and Preservation Alliance has been a lead organization in the opposition to a crossing landing in Kent County. For Janet Christensen-Lewis, chairwoman of the organization’s board, all three retained corridors present significant challenges.

“All of the build options would negatively impact Anne Arundel County and what is clear from the study would also adversely impact Talbot, Kent or Queen Anne’s Counties as well. There is going to be a very steep hill to climb to site the bridge and support building it in the face of all the negative impacts that it will impose on the residents of the these counties,” she said in an email Sept. 15.

A number of factors led those conducting the study to agree with the governor that a new span at the existing crossing is likely the leading option.

“Corridors 6, 7 and 8 achieve the goal of reducing congestion better than all other corridors,” the report states. “While Corridors 6, 7, and 8 are all recommended to be carried forward for further evaluation, the screening results show that Corridor 7 has advantages over Corridors 6 and 8.”

In eliminating 11 of the potential corridors, the alternatives report takes into account more than just traffic capacity. Consideration was given to each area’s natural resources, existing land use, vulnerability to development, population demographics and public feedback, according to the 57-page report.

“Corridor 6 would be disastrous to the northern bay region and Kent County and most importantly, it would serve no purpose for its population. All negative results, no positive gains,” reads a comment posted by a Chestertown resident this past July. “Corridor 7 seems the most likely and least disruptive. Go with it, it has received the most investment over the years.”

The sentiments of that Chestertown resident echo many of those made by other Kent County residents over the last few years of the study.

Take this comment made by a local resident in 2018: “Failing an atomic bomb dropped in Kent County, I am hard-pressed to think of an outcome I could consider more disastrous than the addition of a Bay Bridge span and the ruination it would bring to our beautiful home.”

Throughout the study process, state officials have said they would take public comment into consideration.

In a Sept. 4 letter to the Federal Highway Administration, the Kent Conservation and Preservation Alliance voiced its opposition to the Kent County corridors arguing that the historical and cultural landscape of the area should be protected.

“You are dealing with a landscape of considerable age — about 12,000 to 15,000 years when it comes to indigenous occupation, and well over 350 years from the time of European and African colonization and settlement, which makes this among the oldest such landscapes in eastern North America. The area of Corridor 6 in Kent County is associated with sites of the earliest English settlement, before 1650,” the Kent Conservation and Preservation Alliance stated in the letter.

“We have long felt that alternatives to putting more cars on the road should be found, although most of the suggestions, such as light rail, ferries, or more frequent bus schedules have been shot down by the Maryland Department of Transportation,” said Christensen-Lewis.

Bass cited cashless tolling as one of the progressive approaches favored by the organization, a measure that has been implemented at various locations throughout Maryland including the Bay Bridge.

“We look forward to the implementation of similar forward-thinking solutions which address climate vulnerabilities and minimize impacts upon the communities and landscape of the Eastern Shore,” Bass wrote.

According to the Bay Crossing Study website, the next step in the process comes this fall with the official identification of the preferred corridor alternative, along with the publication of an environmental impact statement. Public hearings are expected to follow over the winter.

For more information on the project, visit baycrossingstudy.com.