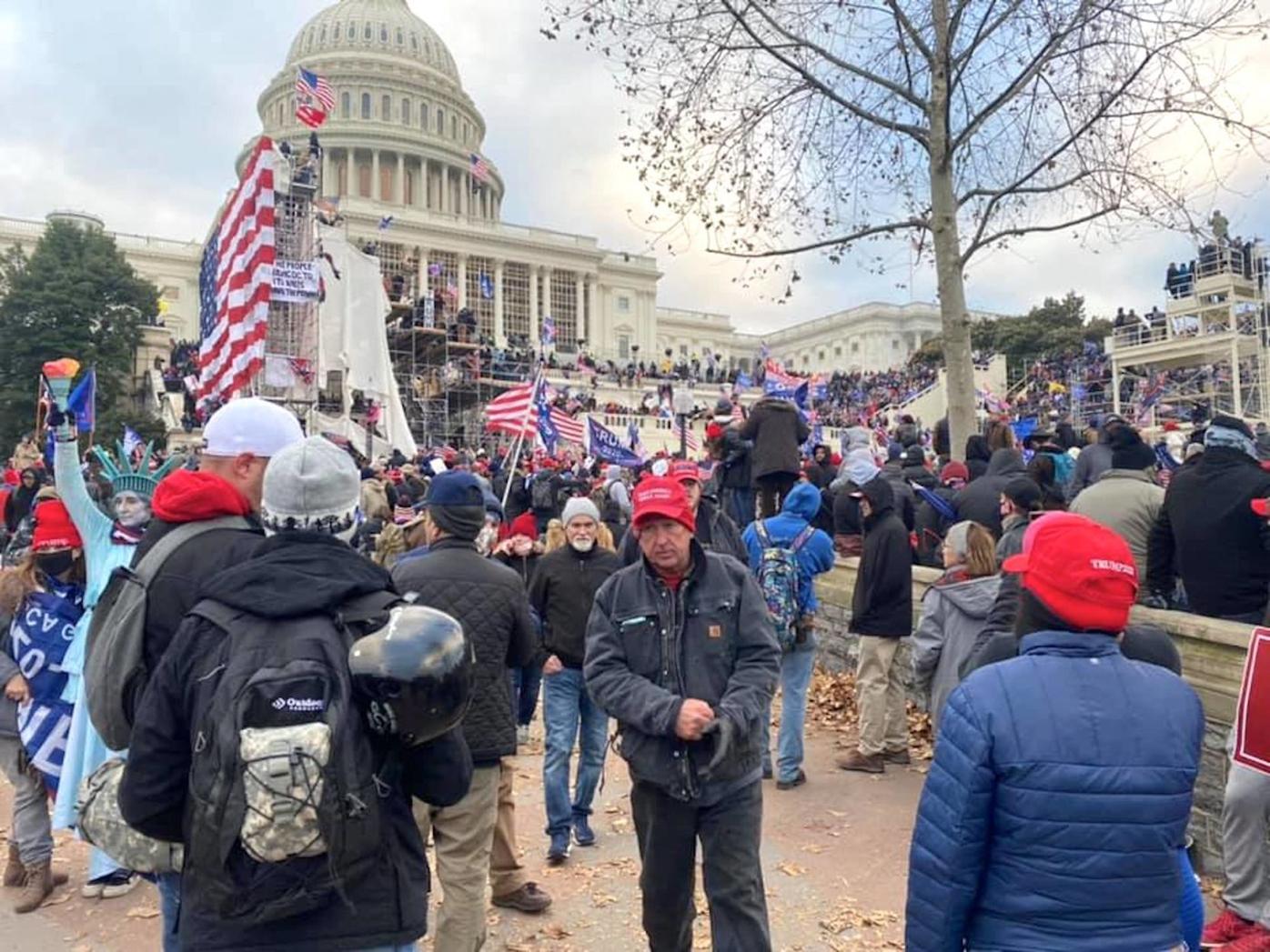 Protestors stand outside the Capitol building on Wednesday, Jan. 6. The protest turned into a riot as members of the crowd broke into the building as Congress was preparing to certify the Electoral College vote. 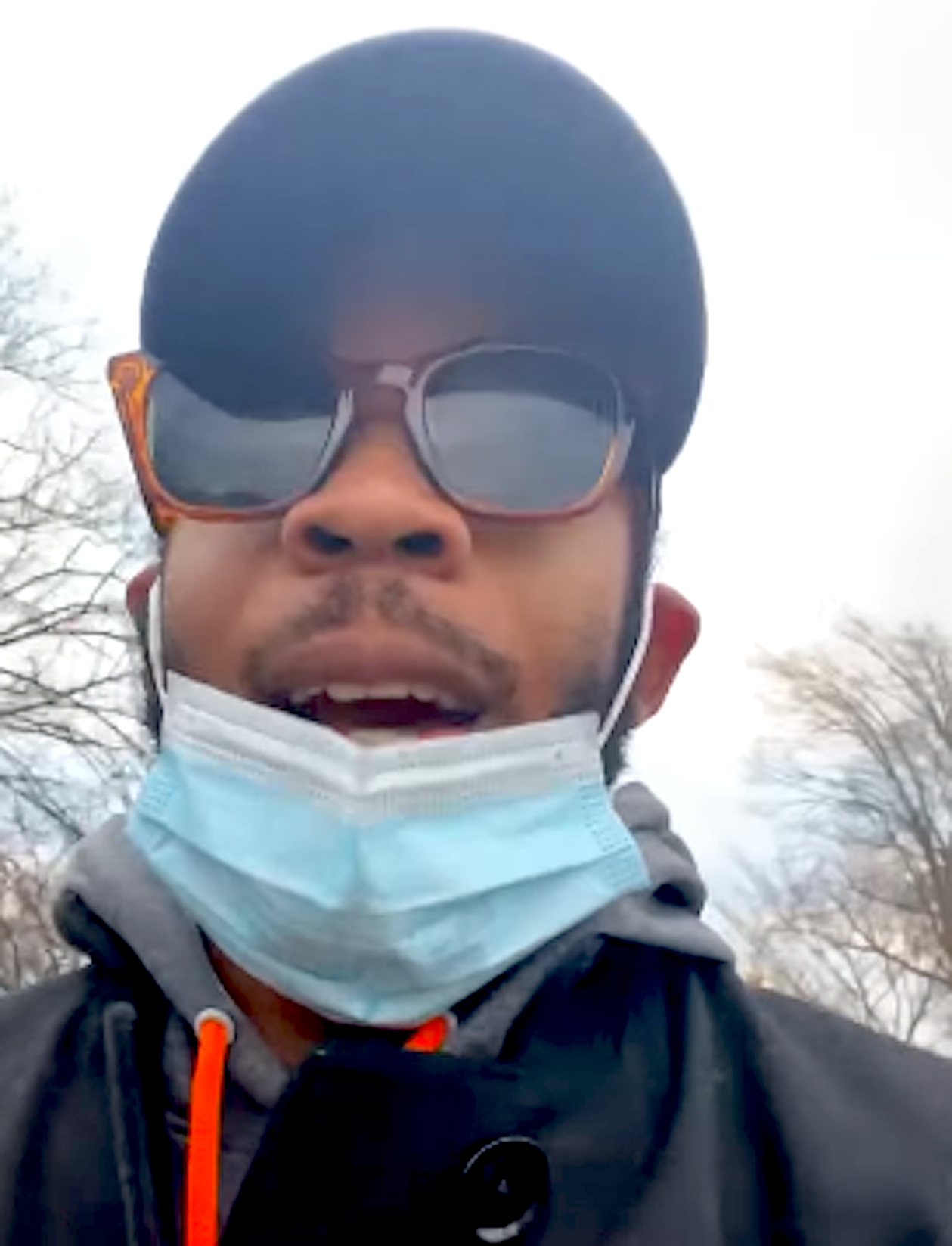 Nivek Johnson, a teacher and Kent County Board of Education member, records himself walking in Washington, D.C. Wednesday, Jan. 6 after having witnessed the riots at the Capitol. 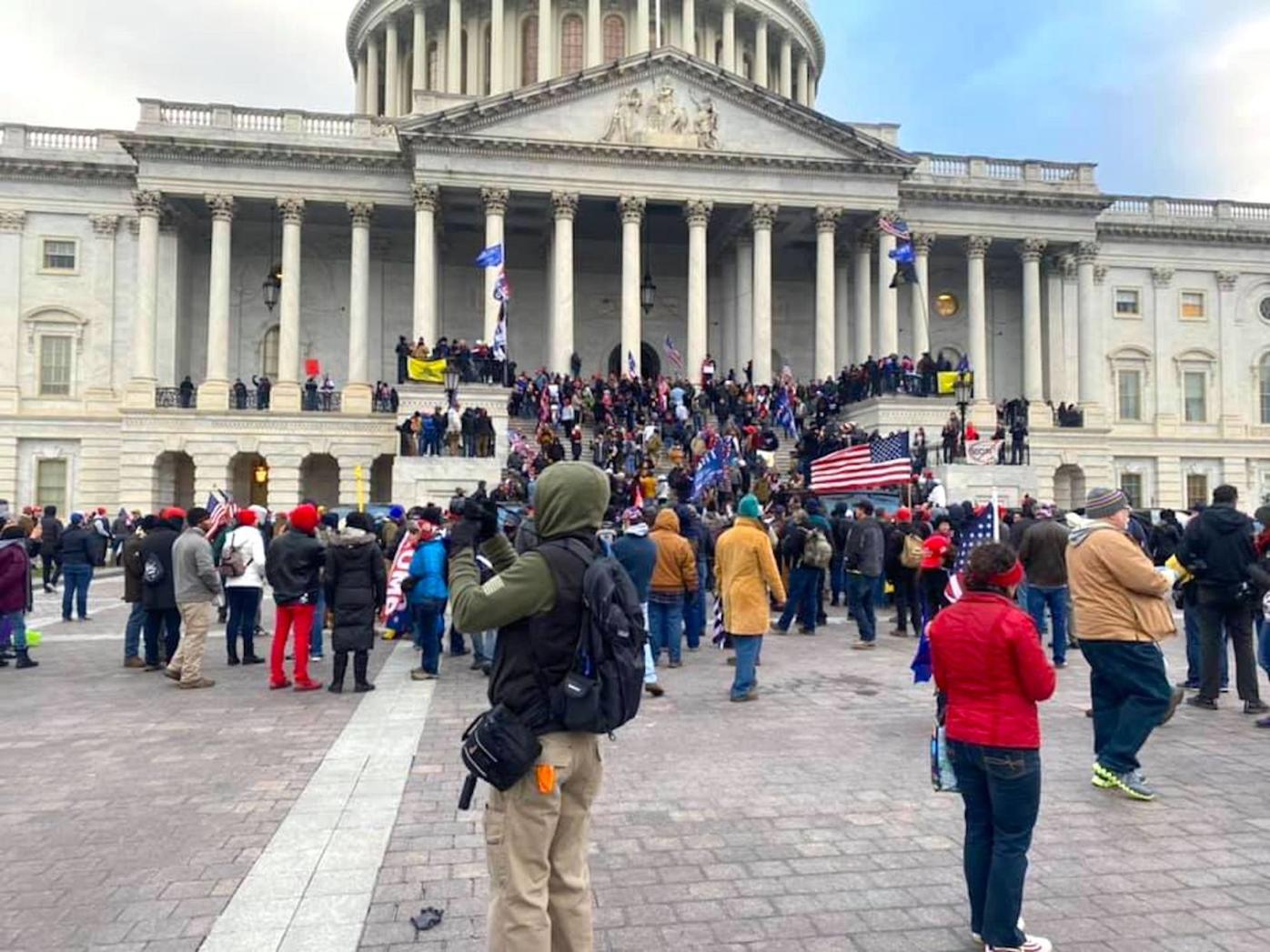 Nivek Johnson was on the scene at the Capitol during last week’s riot as a witness, not a participant. He called the experience eye-opening and said it shows there is a lot of work to do to rebuild our country. 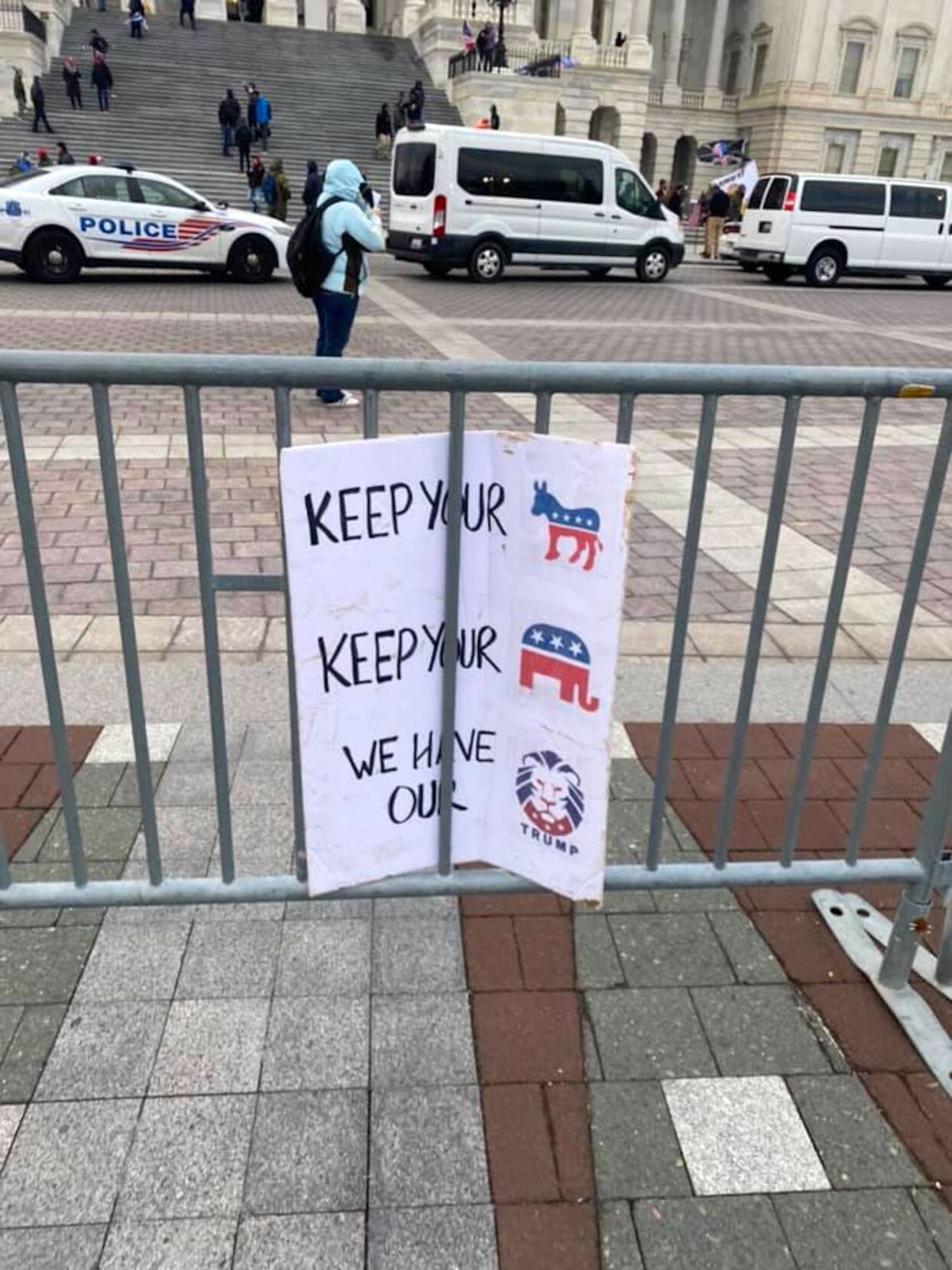 A sign left at the Capitol shows support for President Donald Trump.

Protestors stand outside the Capitol building on Wednesday, Jan. 6. The protest turned into a riot as members of the crowd broke into the building as Congress was preparing to certify the Electoral College vote.

Nivek Johnson, a teacher and Kent County Board of Education member, records himself walking in Washington, D.C. Wednesday, Jan. 6 after having witnessed the riots at the Capitol.

Nivek Johnson was on the scene at the Capitol during last week’s riot as a witness, not a participant. He called the experience eye-opening and said it shows there is a lot of work to do to rebuild our country.

A sign left at the Capitol shows support for President Donald Trump.

CHESTERTOWN — “America is awfully crazy today and not safe.”

That was part of the opening of a short video posted on Facebook by Kent County Board of Education member Nivek Johnson on Wednesday, Jan. 6. Johnson discussed his experience witnessing the riot and insurrection at the Capitol during a school board meeting Jan. 11 and in an interview the following day.

“I was on the grounds of the Capitol during the turbulent situation. This for me was a sad day for our country, especially for our children and adults that were watching how grown citizens act. The behaviors I saw and the conversations I heard, have perplexed me to a point that I still haven’t processed it all,” he said at the meeting.

Meanwhile, former Congressman Wayne Gilchrest has joined an organized call for the impeachment of President Donald Trump over the insurrection at the events of Jan. 6. The Kent County resident has signed on to a letter signed by 29 other former Republican U.S. House of Representatives members calling on Congress to take action.

“As members of the branch that was under attack — not just politically but physically — you must remove the president from office,” the letter states.

In the Jan. 12 interview, Johnson said he was in Washington to meet a friend that day and thought he would see what the expected rally and protest led by Trump looked like as Congress convened to certify the Electoral College vote and Joe Biden’s win. He said in his video that he believes in “being in the trenches everywhere.”

“I saw for firsthand how politics can divide a country and divide a nation,” said Johnson, who teaches computer science and engineering in Montgomery County, in the video. “And it’s sad that we have gotten to this point in America where we cannot just walk away without a fight.”

In the interview, Johnson said when he got to the grounds of the Capitol, rioters had already fought their way into the building and police and the National Guard had arrived on scene. Johnson said he did not go inside the building.

In describing the crowd, he said lots of people were carrying Trump and Gadsen — “Don’t tread on me” — flags. He said some people were dressed in red, white and blue and others dressed like they were in the military. He said it was difficult to distinguish police officers and rioters in some cases.

Johnson said there were people mocking current office holders like House Speaker Nancy Pelosi. He watched as people stood on top of cars, including police vehicles, while others harassed members of the media, getting physical at times.

Some people, he said, brought children with them.

Some of the rhetoric Johnson heard at the Capitol — statements he described as shocking — is still in his head.

“I saw a lot today. It makes me want to cry. I couldn’t fathom some of the stuff that I saw today,” Johnson said in his Facebook video from Washington.

In the interview, Johnson said he was not worried so much about his own safety at the time, though when flash grenades went off and smoke or gas could be seen rising up he became more concerned. He said with that increased response from law enforcement, he was not sure how the situation would evolve.

“When I started seeing the police presence, that’s when I started to think maybe it was time for me to go,” he said.

Johnson said he thinks there is a deep contrast between the Black Lives Matter protests throughout last year — “they were quite peaceful and unified” — and the insurrection at the Capitol, which he described as very chaotic.

Johnson said that anyone who thinks color did not play a factor in that has not been paying attention to the turmoil since George Floyd’s death at the hands of police in Minneapolis, Minn. last year.

Johnson recognizes now the danger he could have faced. He said it was very eye-opening to learn that some involved had planned a violent attack, as reports came out about pipe bombs and explosive devices having been recovered in the area.

As a result of the riot, the House was set to take up impeachment Wednesday, Jan. 13, a process Gilchrest is very familiar with. Gilchrest served in office during Bill Clinton’s impeachment and voted in favor of three of the four articles filed against the president.

“As former Republican Members of Congress, we strongly encourage you to fulfill your constitutional duty to uphold the integrity of the legislative branch and protect American democracy by impeaching President Donald J. Trump,” the letter states.

The former House members wrote about the horror of watching armed protestors storm the Capitol. They called Trump’s apparent encouragement of the protestors even more horrific.

“There is no excuse for nor defense of a President of the United States to actively orchestrate an insurrection on a separate but coequal branch of government. Surely, the Founders would be sickened by the thought of such actions,” they wrote, calling on Congress to remove Trump from office.

The former House members said that while Trump will be leaving office Jan. 20, Congress could still impeach him after his exit as it could ensure he does not hold federal elected or appointed office ever again.

“Congress must send a strong and clear message not just to this president but future presidents that this type of behavior will not be tolerated or accepted. Frankly, the message also needs to be made clear to the American people that there is no place in politics for political violence,” they wrote.

The 30 former members of Congress said they recognize that deciding to remove a president from office is likely the biggest decision current lawmakers will ever face, other than declaring war.

“Unfortunately, it’s now necessary. During our entire careers we upheld the rule of law and the Constitution of the United States. We took our oaths of office and our obligations to the American People very seriously, and we urge you to do the same. It’s time, once and for all, to put country over party,” Gilchrest and his colleagues wrote.

Johnson said he the events of last week reminded that we have a long way to go in this country. He said there is a lot to be learned from what happened at the Capitol and the mission now is to restore and rebuild the country.

“It’s like I tell my students all the time: It’s about finding yourselves informed, studying and researching and dissecting information and making the best choice that will benefit all,” he said.