Speaker of the House Nancy Pelosi, D-Calif., leads the final vote of the impeachment of President Donald Trump, for his role in inciting an angry mob to storm the Congress Jan. 6 at the Capitol in Washington, Wednesday, Jan. 13. 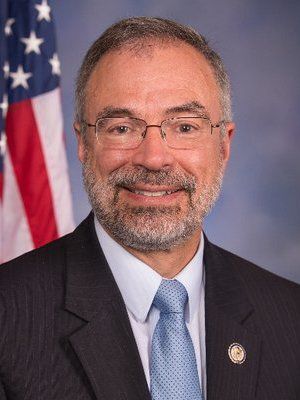 WASHINGTON, D.C. — Congressman Andy Harris was not one of the 10 Republicans who crossed the aisle and voted on Jan. 13 to impeach President Donald Trump. In fact, he did not vote at all.

Harris, R-Md.-1st, posted a statement on Facebook and Twitter saying that he spent his time that day "caring for patients in our district during this pandemic." Harris is an anesthesiologist.

"While I certainly would have voted against impeachment, and the Congressional Record will reflect that, my constituents were better served by my work in the operating room today than by taking part in this pointless exercise," Harris said.

The approved article of impeachment against Trump is for incitement of insurrection following the Jan. 6 storming of the Capitol. With the Jan. 13 vote, Trump has become the only president ever to be impeached twice.

The House voted 232-197 to impeach Trump following the insurrection at the Capitol a week prior. All 197 "nay" votes were cast by Republicans, while 10 GOP members joined 222 Democrats in voting for Trump's impeachment.

Harris was one of four members who did not vote, all of them Republican.

U.S. Sens. Ben Cardin and Chris Van Hollen, both D-Md., issued statements calling for the Senate to act on the House-approved article of impeachment.

“Today’s bipartisan House impeachment vote is a critical reaffirmation of the oath sworn by every individual serving this country — to support and defend our Constitution against all threats, foreign and domestic. The House of Representatives has acted and now the Senate must vote to convict,” Van Hollen said in a statement Jan. 13.

U.S. Rep. Jamie Raskin, D-Md.-8th, has been named the lead impeachment manager by House Speaker Nancy Pelosi, herself a Baltimore native. Raskin will lead the team of eight other impeachment managers in presenting the case against Trump in the Senate.

The article of impeachment cites Trump's false claims of widespread voter fraud at a Jan. 6 rally as Congress prepared to meet in joint session to certify the Electoral College vote and finalize Joe Biden's victory in the 2020 presidential election.

It also cites Trump's statements to the crowd "that, in context, encouraged — and foreseeably resulted in — lawless action at the Capitol, such as: 'if you don't fight like hell you're not going to have a country anymore.'"

"Thus incited by President Trump, members of the crowd he had addressed, in an attempt to, among other objectives, interfere with the Joint Session's solemn constitutional duty to certify the results of the 2020 Presidential election, unlawfully breached and vandalized the Capitol, injured and killed law enforcement personnel, menaced Members of Congress, the Vice President, and Congressional personnel, and engaged in other violent, deadly, destructive, and seditious acts," the resolution states.

Six deaths, including two Capitol Police officers, have been tied to the insurrection.

The impeachment resolution also lists Trump's "prior efforts to subvert and obstruct" the election results — nearly 81.3 million votes for Biden against a little more than 74.2 million for Trump.

It specifically highlights a Jan. 2 phone call Trump made to the Georgia secretary of state. It was during that phone call, which was recorded, that Trump asked for election officials to "find" enough ballots to overturn the results and hand Georgia's Electoral College vote to him.

"He threatened the integrity of the democratic system, interfered with the peaceful transition of power, and imperiled a coequal branch of Government. He thereby betrayed his trust as President, to the manifest injury of the people of the United States," the resolution reads.

Cardin said in a statement issued Jan. 13 that Trump is the only president to be impeached twice "because he is the only sitting American president in our 244-year history who incited a violent insurrection against our own government."

"There have been presidents with whom I have disagreed on nearly every policy matter, but I knew they at least understood the U.S. Constitution, took their constitutional oath seriously, and respected the checks and balances and separation of powers in our government," Cardin said.

Cardin said Trump should have resigned the week before. He called on the president to resign now to allow the country "to heal from the wounds he has inflicted upon our democracy by his flagrant disregard of the Constitution and contempt for the rule of law."

"Of course, Donald Trump has never voluntarily put the country before his own self-interests, which is why we find the country in crisis today," he said.

"President Trump has threatened the safety and security of our democracy. He has shown contempt for our Constitution and violated his duty to protect the American people and our republic. As this Article of Impeachment states, he has ‘engaged in high Crimes and Misdemeanors by inciting violence against the Government of the United States,’" Van Hollen said.

In his statement, Harris called out Pelosi and argued that the "divisive, hastily called, and politically motivated snap impeachment is a waste of time" considering Biden is set to be sworn in Jan. 20.

"In light of his calls for unity and healing, I call on the President-elect to disavow this action. Engaging in a political impeachment that will be moot in one week was another waste of time brought to you by the Democrat majority," said Harris, who was reportedly involved in a scuffle on the House floor with a Democratic colleague when Congress reconvened Jan. 6 after the insurrection to certify the Electoral College vote.

Harris also was one of the Republicans to continue to raise objections during the Jan. 6 proceedings over claims of voter fraud. Harris continues to face calls for his resignation for his actions, from his constituents on the Eastern Shore to the Maryland Democratic Party.

“Representative Harris’ actions have been nothing short of an attack on our democracy, a betrayal of those who he represents, and an attempt to overturn a legitimate election in favor of a wannabe authoritarian. His conduct is a disgrace to the First Congressional District, and to all the people of Maryland," said Yvette Lewis, chairperson of the Maryland Democratic Party, in a statement issued Jan.7

Trump is likely to be out of office before the Senate could complete a trial. A trial could still be held after Biden moves into the White House and Trump's conviction could mean he is never again able to hold federal office, elected or appointed.

Cardin called on the Senate leadership to work together to immediately move forward with action against "the blatant transgressions of our president." He said Trump's little time left in office is irrelevant.

"There must be serious consequences for encouraging the overthrow of our legally elected government,” Cardin said.