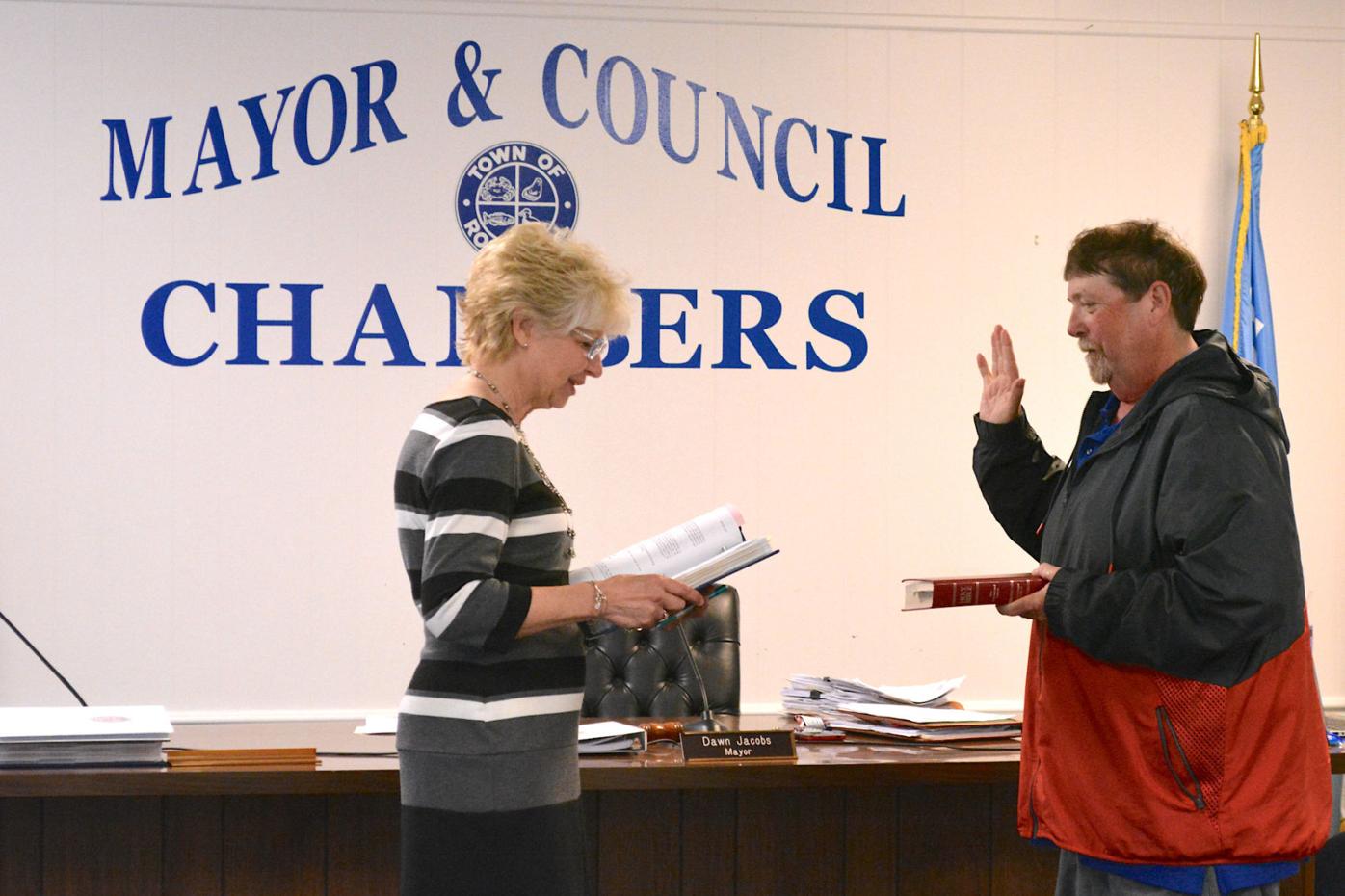 Mayor Dawn Jacobs swears in Tim Edwards as a member of the town council Monday, May 3. Edwards was elected to another four-year term in the election held two days prior. 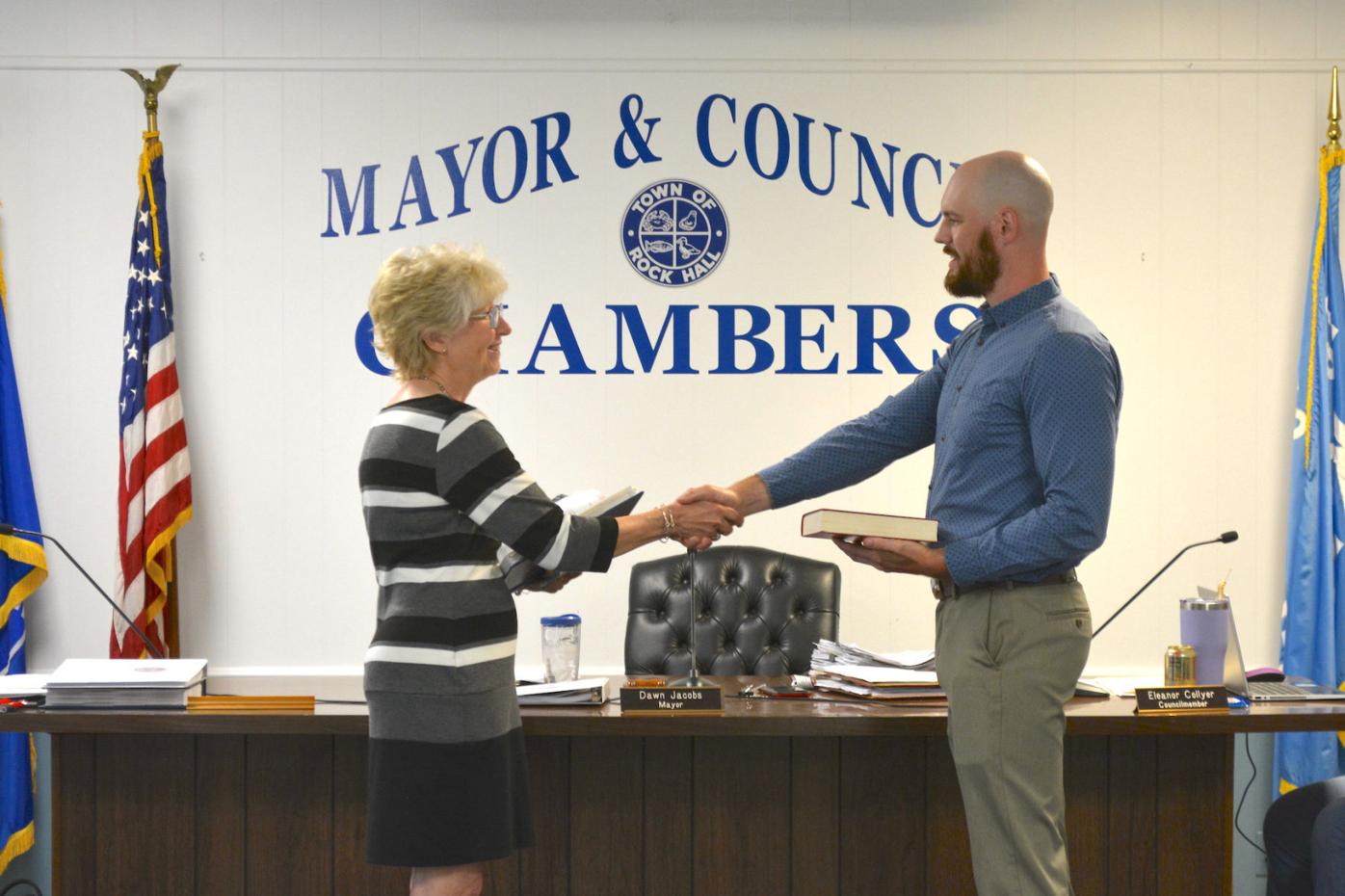 Rock Hall’s newest member of the town council James Cook shakes hands with Mayor Dawn Jacobs after being sworn in to office Monday, May 3. Cook was the top vote-getter in this year’s municipal election.

Mayor Dawn Jacobs swears in Tim Edwards as a member of the town council Monday, May 3. Edwards was elected to another four-year term in the election held two days prior.

Rock Hall’s newest member of the town council James Cook shakes hands with Mayor Dawn Jacobs after being sworn in to office Monday, May 3. Cook was the top vote-getter in this year’s municipal election.

ROCK HALL — Tim Edwards has been returned to the Rock Hall town council for another four years along with newcomer James Cook.

Two council seats were on this year’s municipal election ballot, with Edwards the lone incumbent. Vice Mayor Beth Andrews opted not to seek another term.

The polls were open at the Rock Hall Municipal Building Saturday, May 1.

Cook won the election with 153 votes. Edwards followed with 146.

Brian Jones, who formerly served as a mayor and as a council member, failed in his bid to rejoin the board. He came in third with 93 votes, more than double the 44 votes received by his father, also a former councilman, David Jones Sr.

In between the two Joneses, David Mayne came in fourth with 86 votes. Walter Elburn Jr. was last with 42.

Edwards and Cook were sworn in at the start of the mayor and council meeting held Monday, May 3.

“I am very happy to be back here. I want to finish what I started, with water and sewer and stuff like that. That’s pretty much why I ran,” Edwards said.

Edwards was first elected to the council in 2017. He is a retired town employee.

For Cook, this is his first time seeking and being elected to office.

“I’m really honored that the residents have put their faith in me as one of their voices on the council. I will do my utmost to help out in any way I can,” he said in an interview Tuesday, May 4.

The 29-year-old has lived in Rock Hall for five years and has been a Kent County resident for 15 years. He works for Easton-based engineering firm RAUCH Inc. and teaches drafting and design at Chesapeake College.

Cook said he knocked on a lot of doors during the campaign, speaking with many town residents. He wants to see a whole community effort in tackling Rock Hall’s biggest issues, such as its aging water and sewer system.

He also wants to see more communication between the municipal government and residents and businesses.

“I know that no single person has all the answers, but I firmly believe that if we work together as a community, we can come up with creative solutions to the problems in front of us. To that end, please do not hesitate to reach out to me with any concerns, questions, or suggestions,” Cook posted on Facebook following his election victory.

At the May 3 meeting, Mayor Dawn Jacobs commended the winners and the other candidates, highlighting that six people ran in this year’s election.

Council member Carolyn Jones was named vice mayor at the May 3 organizational meeting. The vote was unanimous.

Carolyn Jones said she thinks this is a good time for the town to regroup and start moving forward on projects — scraping the money together to get them accomplished.

“It’s slow, but surely we’re going there,” she said.

Carolyn Jones was named liaison for streets and sanitation and parks and recreation.

Jacobs split the responsibilities for water and sewer liaison. Edwards was tasked with staying up to date on the water system and Cook was assigned the sewer system.

Town Manager Bob Resele asked that Edwards continue to assist with the sewer system due to his institutional knowledge. Edwards and Jacobs both agreed to that.

Collyer will serve as the liaison for planning and zoning.

Jacobs herself will serve as the liaison for the Museum Board and the Communications Board and on town transportation.

Jacobs asked Collyer to assist her with financial planning with the town manager and clerk/treasurer.

Jacobs encouraged council members to take an online training program in the state’s Open Meetings Act governing how boards like the mayor and council are required to operate. Jacobs said she and Collyer are both certified.

“I would encourage everybody to do that,” Jacobs said. “All of our public bodies — which means all of our standing committees, any group that we have authorized — need to follow the same Open Meetings Act rules.”