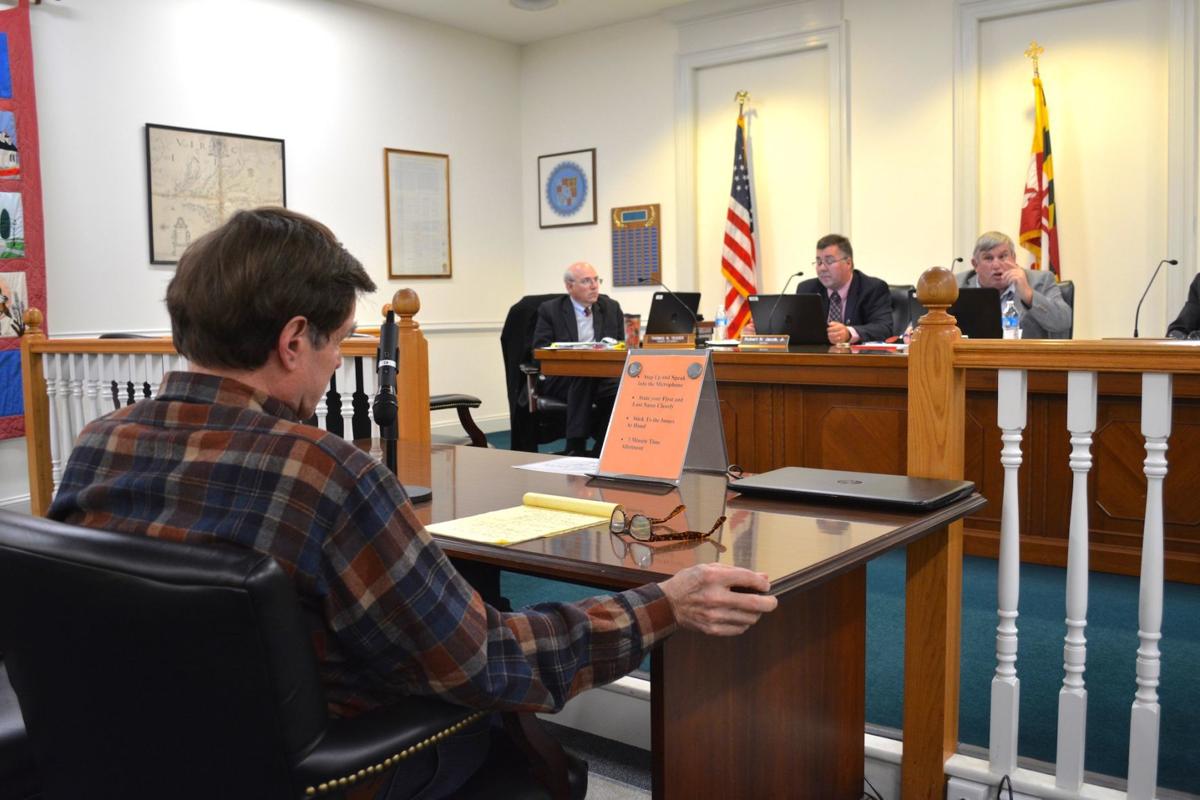 Tom Mason, back right, president of the Kent County Commissioners, raises concerns Tuesday, Jan. 7 over a request by Chestertown Councilman David Foster, foreground, about bringing in a third party to discuss a potential tax differential for municipal residents.

CHESTERTOWN — Debate over a sought-after tax break for municipal residents in Kent County has been rekindled.

The issue of a tax differential saw heated discussions last summer as county and municipal budgets were being struck, with pledges made by those on both sides to work together on a potential solution.

In a letter to the Kent County Commissioners dated Dec. 19, Chestertown Mayor Chris Cerino renewed an official request for a tax rebate of $250,000 to the Town of Chestertown or an equivalent tax differential for municipal residents.

At a commissioners meeting Tuesday, Jan. 7, the letter was briefly discussed. The matter of a tax differential was subject of a broader debate that evening when Chestertown Councilman David Foster brought it up again during the portion of the meeting set aside at the end for public comment.

In reviewing Cerino's letter, the commissioners agreed to schedule a workshop with Chestertown officials and those from the county's other four incorporated municipalities in advance of budget discussions expected to begin in a couple of months. The commissioners said they wanted to hold the workshop sooner rather than later, possibly before the month is out.

Kent is one of three counties in Maryland that does not offer any sort of tax offset for municipal residents who pay property taxes to both the county and the town.

As spelled out in Cerino's letter, "every resident in Kent County pays the full property tax rate of $1.02 per $100 of the assessed value of their homes, farms, or parcels of land." Those taxes pay for the various services offered by the county, such as law enforcement through the Kent County Sheriff's Office, road maintenance and planning and zoning services, he wrote.

"However, County taxpayers living within the municipal boundaries of Chestertown receive none of these services from the County. Put simply, Chestertown residents get far fewer services for the same tax dollars than those living in unincorporated areas. They are essentially taxed twice," Cerino wrote.

Meanwhile, Cerino wrote, the town spends about $3.5 million a year on a fully staffed police department of its own, maintaining 25 miles of roads, providing its own planning and zoning services and more without county assistance.

"Chestertown makes up more than a fourth of the population of Kent County and accounts for a significant portion of the County's tax base," he wrote. "We understand that the County Commissioners have many difficult choices to make during the budgeting process. However, this is a vitally important issue that has a direct, adverse impact on the financial well-being of your own County seat."

Commissioner Ron Fithian and Foster previously held talks about the tax differential after last summer's debates. Due to a number of personal issues among both men, the discussions stalled.

At the Jan. 7 meeting, Foster sought to start the conversation again, with an eye toward bringing in a third party to assist. He recognized the acrimony that may have been created at one of last summer's contentious meetings. At one of the meetings, Cerino spoke about "phantom services" and called the situation a "scam."

"Probably at that meeting we generated more heat than light," Foster told the commissioners Jan. 7.

Fithian said he was amenable to meeting with Foster again. He said in the interim, though, the county has been conducting its own research on services provided to municipalities.

For Fithian, the issue of a tax differential appears to boil down to the county not getting credit for those services. He spoke about the funding the county sends to the volunteer fire companies, most of them stationed within municipal boundaries; money allocated for paramedics; and the build-out of a fiber network providing municipalities with high-speed internet.

Fithian said the county does not give those funds to the towns, the commissioners send it directly to where it needs to go.

"I don't think it's a question that we don't do anything for the Town of Chestertown to begin with. I think it's something that's as simple as how we get credit for it," Fithian said. "I don't know what we can do to get past this."

He said perhaps the county should give the money to the towns to pass on instead. He said then Kent County would be taken off the list of those in Maryland without a tax differential.

"If that's going to be an issue, then we need to just stop giving those things out and give it to you all in one check and let you divide it up and we can call it a 'tax differential' and that's the end of the story," Fithian told Foster.

Foster said everyone in the county is receiving the services Fithian listed. He said the issue is for the services municipal residents pay the county for but do not receive from the county: law enforcement, street maintenance and planning and zoning.

Tom Mason, president of the commissioners, was not inclined to pay for a third party to help rectify the matter.

When Foster said the issue is complex and walking into a meeting without being fully prepared is "almost a recipe for failure," Mason replied that county officials are working to ensure they are prepared.

"I hope you are on your end, with what your expenses are, where you're spending your money, why you would need a tax differential," Mason told Foster. "That's part of what we're going to be discussing, I'm assuming."

Mason said he wants a meeting where people are not "pounding on the table."

He said at some point, the town has to recognize the services it is receiving. He also questioned how Chestertown is spending its own funds, saying that he saw crews picking up leaves from in front of people's yards. That is a service no one else in the county receives, he said.

"David, I certainly thank you for coming in. I'm appreciative of your passion," Mason told Foster. "But I think we are probably not achieving anything at this time. And we're an hour into the Maryland-Ohio State basketball game."

"I'm also a Maryland alumni and I appreciate that," Foster replied.