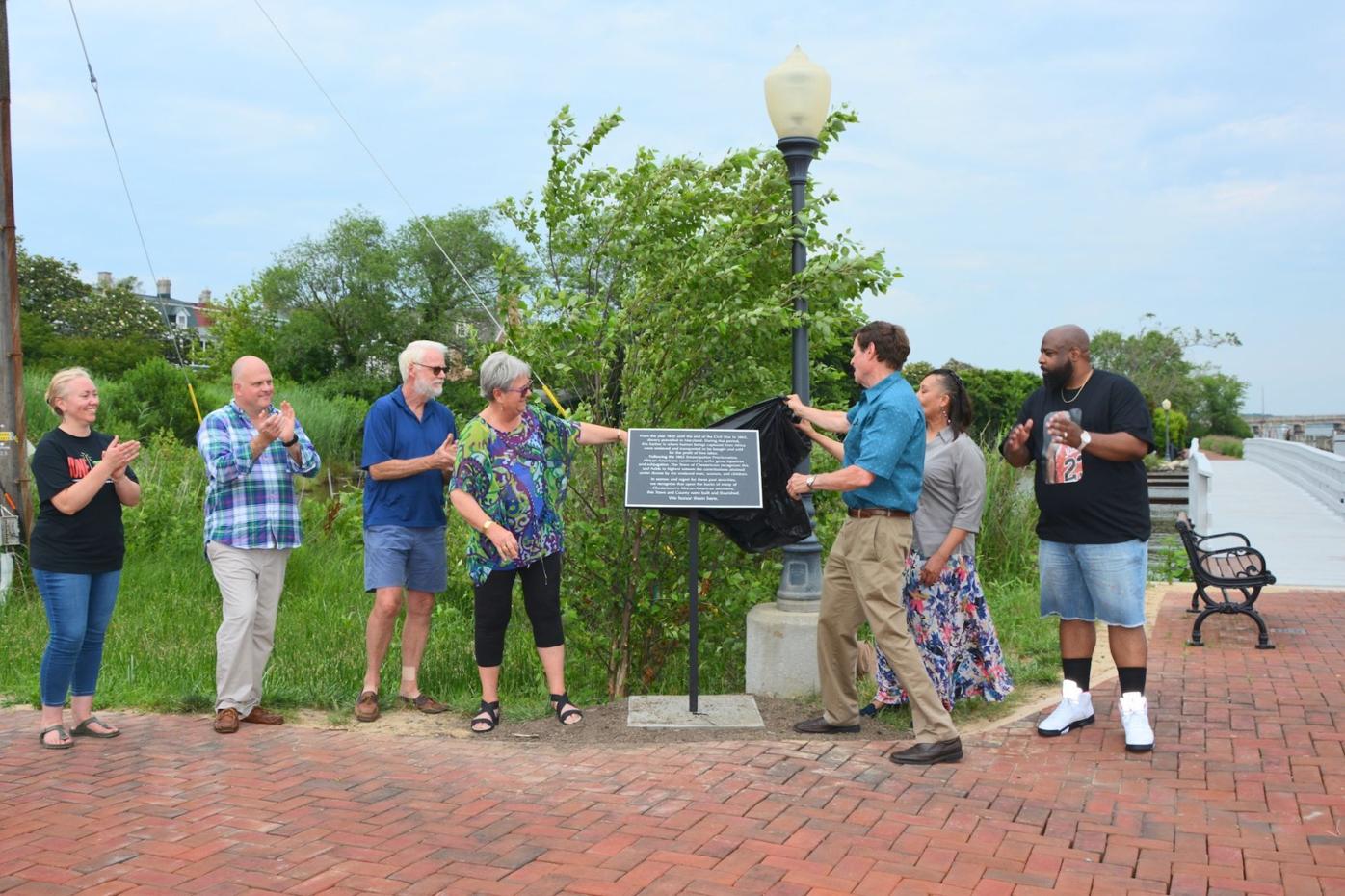 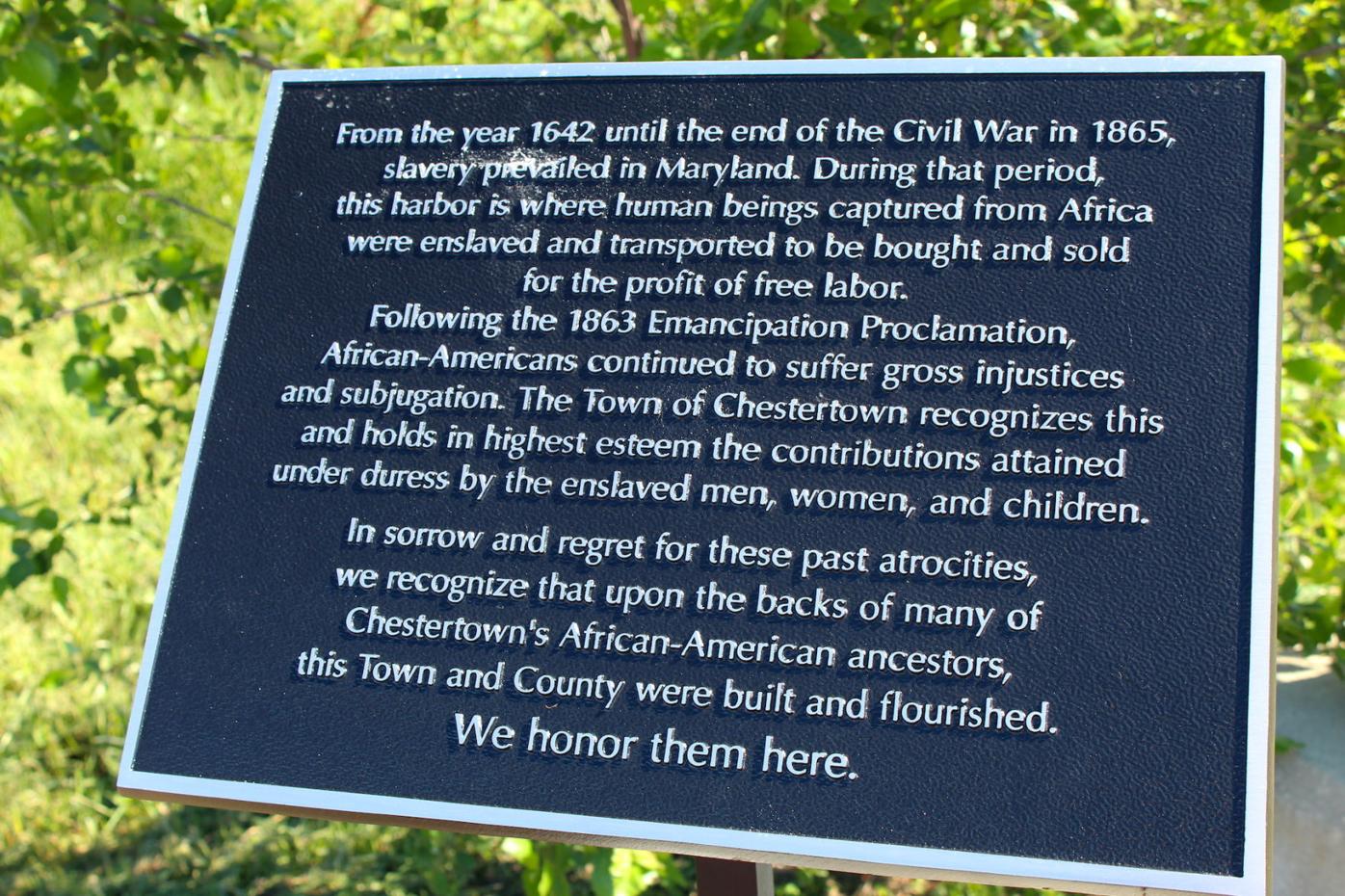 Historic signage is part of the Chestertown Unites Against Racism 16-month plan that was adopted last September. The first sign, near the Port of Chestertown Marina, was unveiled Saturday, June 19.

Historic signage is part of the Chestertown Unites Against Racism 16-month plan that was adopted last September. The first sign, near the Port of Chestertown Marina, was unveiled Saturday, June 19.

CHESTERTOWN — One of the aims of the Chestertown Unites Against Racism 16-month action plan that was adopted last September is to educate the community about its history pertaining to race relations.

Another is to promote unity, equality and inclusivity among all residents.

Tangible evidence that the mayor and council intend to follow through with that pledge is signage that was publicly unveiled Saturday afternoon as part of the Black Union of Kent County’s Juneteenth celebration.

The sign, which is located between the foot of High Street and the Port of Chestertown Marina, is apologetic and contrite in tone.

The town acknowledges that its harbor is “where human beings captured from Africa were enslaved and transported to be bought and sold for the profit of free labor,” and that even after the Emancipation Proclamation in 1863 freed all slaves, African-Americans continued to suffer “gross injustices and subjugation.”

“The Town of Chestertown recognizes this and holds in highest esteem the contributions attained under duress by the enslaved men, women and children,” the sign states.

“In sorrow and regret for these past atrocities, we recognize that upon the backs of many of Chestertown’s African-American ancestors, this Town and County were built and flourished.

“We honor them here.”

The mayor and council had the final approval of the wording, which was written by Karen Somerville and Cindy Fulton and then vetted by the Equity Advisory Committee that was established under the 16-month plan.

The mayor and council also approved the location.

At the unveiling Saturday, Somerville spoke of the “momentous occasion” that was coinciding with the Juneteenth celebration.

“How wonderful that it should all happen right now and at the same time,” she said. “And how wonderful that we can all stand here together, as different as we are and yet all the same, wanting equality and justice for all.”

And with that, Fulton and Mayor David Foster unveiled the sign to applause from the large gathering.

The signage falls under the unification pillar of the Chestertown Unites Against Racism plan.

Queen said benefactors Somerville and the Fultons are assisting him with creating as many as five signs during the 16-month plan. They stepped up as private citizens to sponsor the first sign.

Queen also is chairman of the Equity Advisory Committee. He is credited with authoring the plan, with help from former mayor Chris Cerino.

“When I wrote the plan for the Town myself and Chris Cerino thought that the historic signage was something that both the Back and White communities could be proud of,” Queen said in an email to the Kent County News.

The 10-member Equity Advisory Committee was unanimously adopted as a resolution last October.

Its charge is to assist the mayor and council with implementation of the Chestertown Unites Against Racism program.

According to the resolution, the committee will review the initiatives outlined in the 16-month plan, prioritize which projects should be implemented and in what order, and potentially add new ideas.

The committee also will assist the mayor and council with, among other things: identifying resources for cultural/diversity trainings; developing topics for the proposed video series chronicling Chestertown’s history and helping identify individuals to interview, historic sites to document and other topics to explore; arranging community dialogues with members of the Black community and identifying topics to address; identifying ways to enhance minority participation in public events throughout Chestertown and brainstorming new town-sponsored events such as Juneteenth that would encourage participation from the Black community; identifying landmarks and historic figures of significance to the Black community that would be considered for new historic signage in town; and any other initiatives that address systemic racism in Chestertown and promote unity, equity and inclusion.