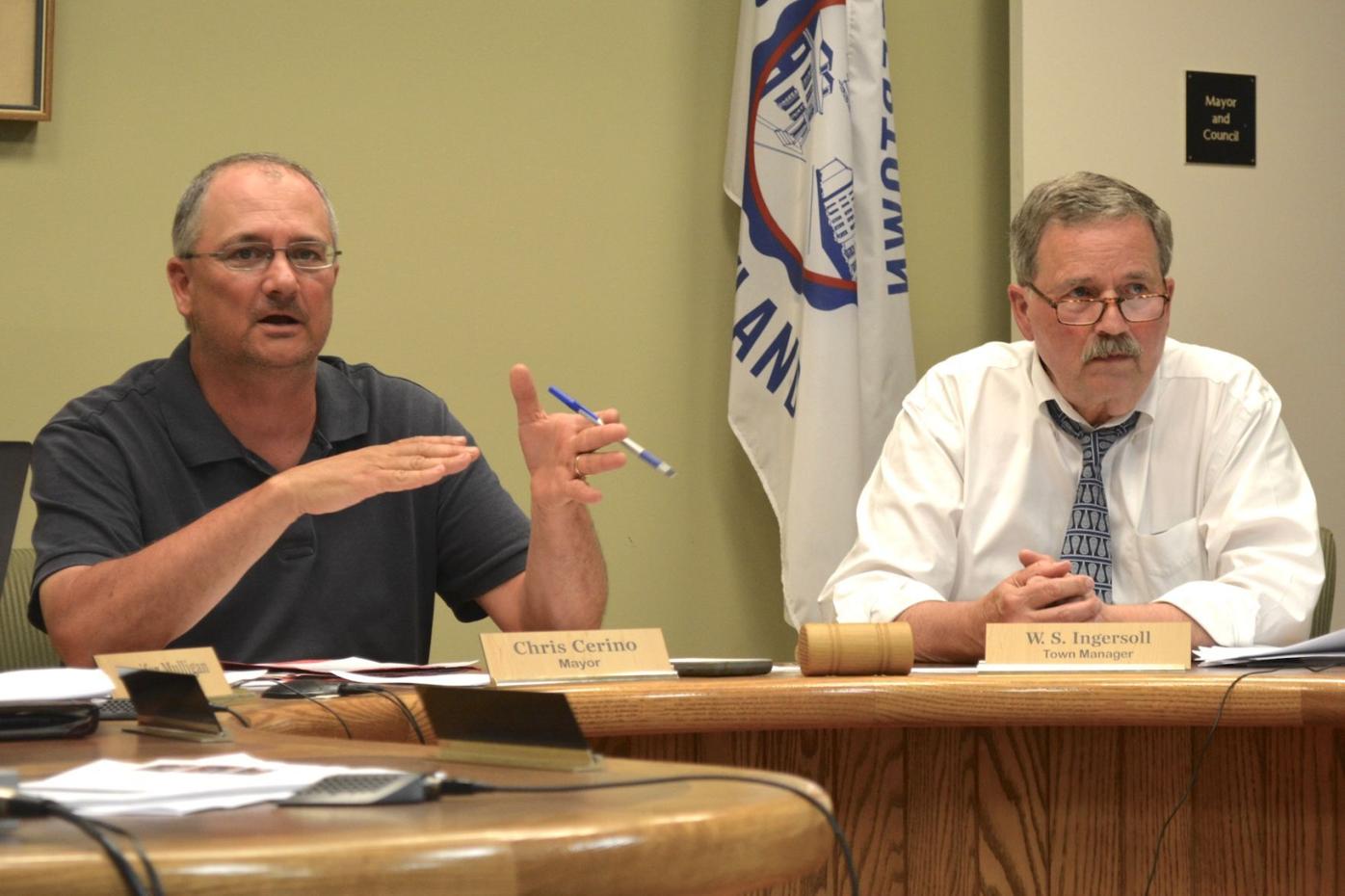 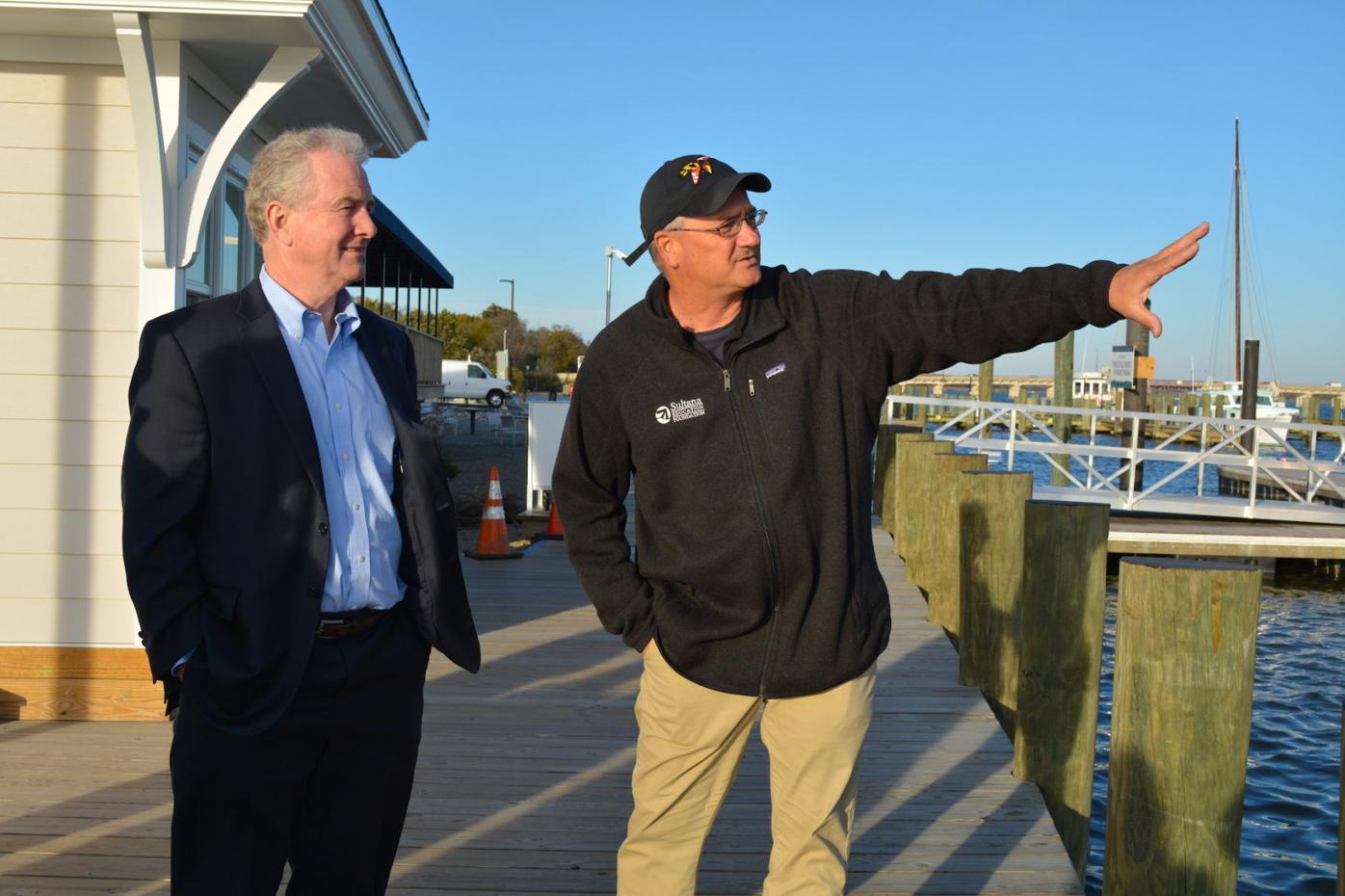 Chestertown Mayor Chris Cerino, right, talks to U.S. Sen. Chris Van Hollen about federally funded renovations at the Port of Chestertown Marina during a tour in 2019. The marina renovations were a focal point of Cerino’s agenda as mayor.

Chestertown Mayor Chris Cerino, right, talks to U.S. Sen. Chris Van Hollen about federally funded renovations at the Port of Chestertown Marina during a tour in 2019. The marina renovations were a focal point of Cerino’s agenda as mayor.

Last month, Cerino publicly stated that he would not seek a third four-year term. The election — for mayor and council seats in the First and Third wards — is in November.

In his letter of resignation, Cerino cited the emotional and physical toll of the past seven years, brought on by the stress of being mayor.

He said his decision was made after hours of soul searching, conversations with his wife and children, and ultimately at the direction of the family physician.

“Over the past several days, my emotional state has become increasingly unstable,” Cerino said in the letter. “While this is embarrassing to reveal in a public forum, I must now be honest with myself — and with you — in acknowledging that the stress levels I have endured for the past seven years are significantly impacting my mental health and physical well being.”

Cerino said he was unable at this time to provide competent, strong and energetic leadership.

“In the long term, I am confident that I will be fine,” Cerino wrote in the letter that was addressed to the residents of Chestertown. However, he said, “in the short term I urgently need to unplug, spend time with family and friends, and focus exclusively on activities that bring me peace and happiness.”

A new mayor will be elected in seven months, and Cerino said when that time comes he would stand by, ready to assist in any way practical.

In the interim, Cerino said he is confident that the town will be in the capable hands of staff and council members David Foster, Tom Herz, Ellsworth Tolliver and Meghan Efland.

Ingersoll said he has served under at least four mayors, including Cerino’s predecessor Margo Bailey, who was mayor for 20 years before retiring in 2013.

Cerino earned high marks from Ingersoll for having a big heart and never being swayed politically.

“He’s right up there with the best,” Ingersoll said, “and I’m proud to have worked with him.”

Where the council goes from here is undecided.

Ingersoll told the council members that they could appoint an acting mayor from within. If they cannot agree, there would be a special election prior to the November election.

Ingersoll said he would respond to the acting mayor in between meetings.

As the two-hour meeting was winding down, during their ward reports council members expressed shock and sadness at the news and spoke of Cerino’s positive attributes.

Herz, who is 16 months into his first term, said he was “distressed” by Cerino’s resignation and that it was a huge loss to the town.

In a letter emailed to the Kent County News on Wednesday (see page A4), Herz wrote: “A lot will be said about Mr. Cerino in the coming days, but we must not forget how we got to this moment.

“Small town politics is a rough business. We all know this. And those of us who serve in public office put our personal relationships, careers, physical and mental health in peril. We should commend him for openly and forthrightly explaining why he left,” Herz wrote.

He was unchallenged in his re-election bid in 2017. He said then that the main reason he was running for a second term was that he wanted to see the overhaul of the town-owned Port of Chestertown Marina to its completion.

Cerino is the vice president of the Sultana Education Foundation, which keeps its namesake vessel at the marina and hosts the popular Downrigging Festival each the fall.

Also over the next four years, Cerino said he would continue to seek ways to bring foot traffic downtown, talk up the newly designated Enterprise Zone, support existing businesses and assist other entrepreneurs who are trying to launch new ventures, and to work with providers to improve cell phone coverage — all part of what he deemed “creating a welcoming, supportive environment.”

Resolution of the decades-old spill of heating fuel at what is now University of Maryland Shore Medical Center at Chestertown and the hospital’s future as an inpatient facility also were priorities.

“There’s just no scenario where I would be willing or able to do this for another four years,” he said.

Also, Cerino said he was a believer in term limits. He said eight years is a lot of time to get things done, and he believed that most of what he set out to get done had been accomplished.

He said he thought it was important for the town to have a change in leadership, to bring new ideas and new energy to the position.

In his resignation letter to the residents of Chestertown, Cerino said he was proud of what had been accomplished during his tenure as mayor, including capital improvements and economic development programs that have been put in place.

He said the social justice initiatives designed to address issues of equity and inclusion, some of them under his Chestertown Unites Against Racism 16-month plan that was launched in September, “are just beginning to bear fruit, and will benefit our residents for years to come.”

None of this would have been possible without the support of hundreds of community stakeholders that have helped along the way, Cerino said.

He issued a blanket thank you to the volunteers who have served and are serving on the town’s many commissions and committees, and commended the town hall staff and employees for their dedicated service.

“While the Mayor often gets the sound bites in the press, you are the true face of Chestertown for our constituents,” Cerino wrote in the letter.

Lastly, he thanked the Sultana Education Foundation’s board of directors for being generous and flexible in allowing him to juggle the responsibilities associated with holding public office while simultaneously working to implement educational programs at SEF.

In closing, Cerino wrote: “Please know that I have nothing but love, respect, and compassion for every single one of the five thousand residents of Chestertown.”

Tuesday night’s meeting was live streamed on the Zoom video-conference platform. The meeting was pushed back from its regularly scheduled first Monday of the month due to a lack of a quorum.

Cerino did not attend either meeting.

Ingersoll said that the mayor’s letter of resignation, which was dated Monday, April 5, explained his absence.

The main agenda item was the Recreation Commission’s recommendations for the existing downtown Ajax pocket park, which has met opposition from some neighboring business and property owners.

The lawyer representing some of the opponents argued that the town was violating the Open Meetings Act because 24 hours notice had not been given for the date change and amended agenda.

A motion to continue with the meeting anyhow failed to get a second.

Also there was no second to adjourn the meeting.

As acting mayor, Tolliver opened and adjourned the meeting.