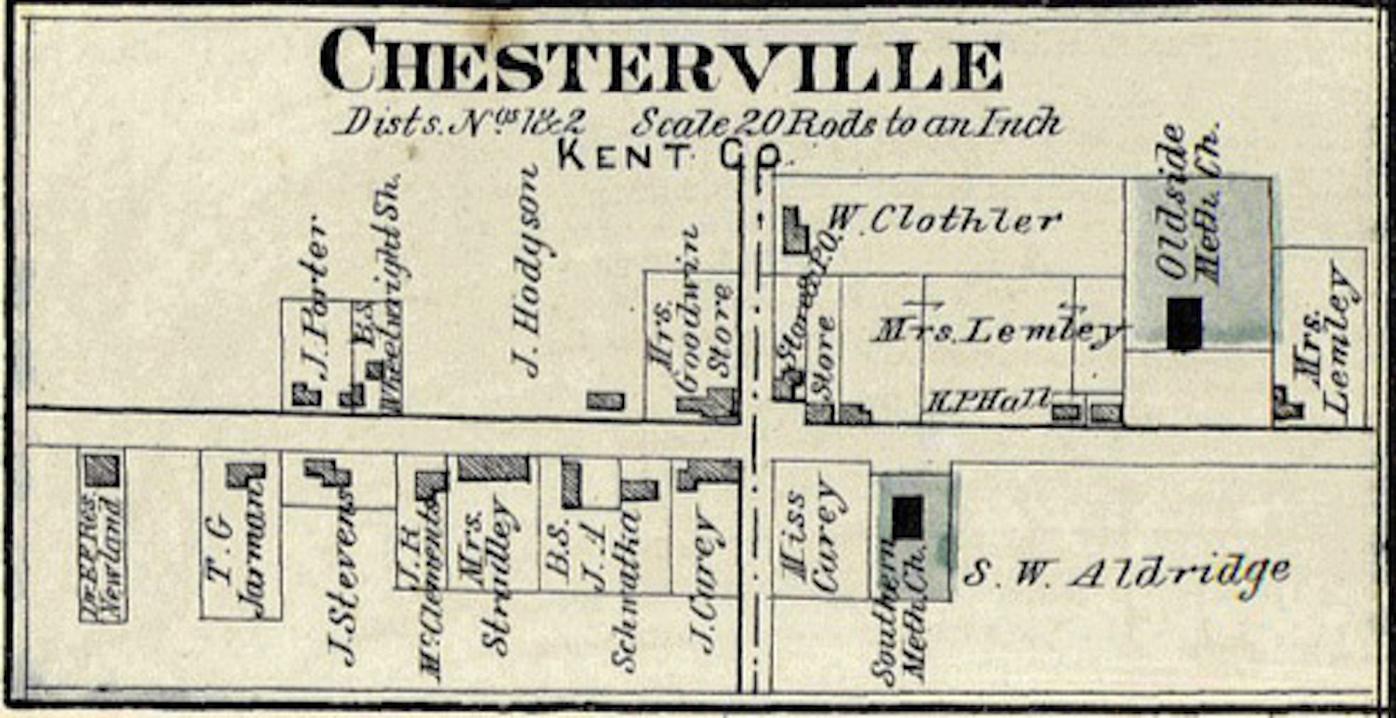 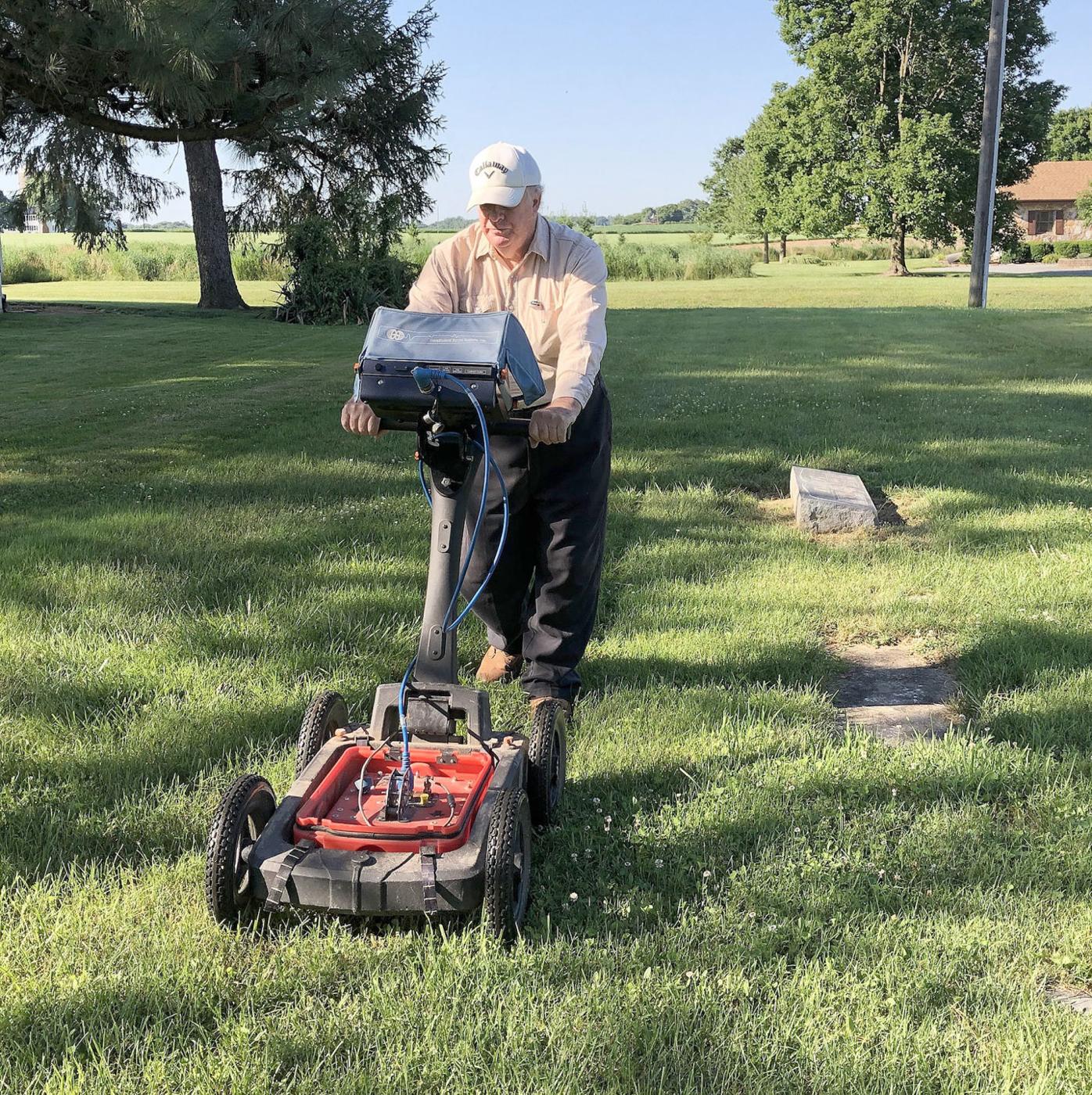 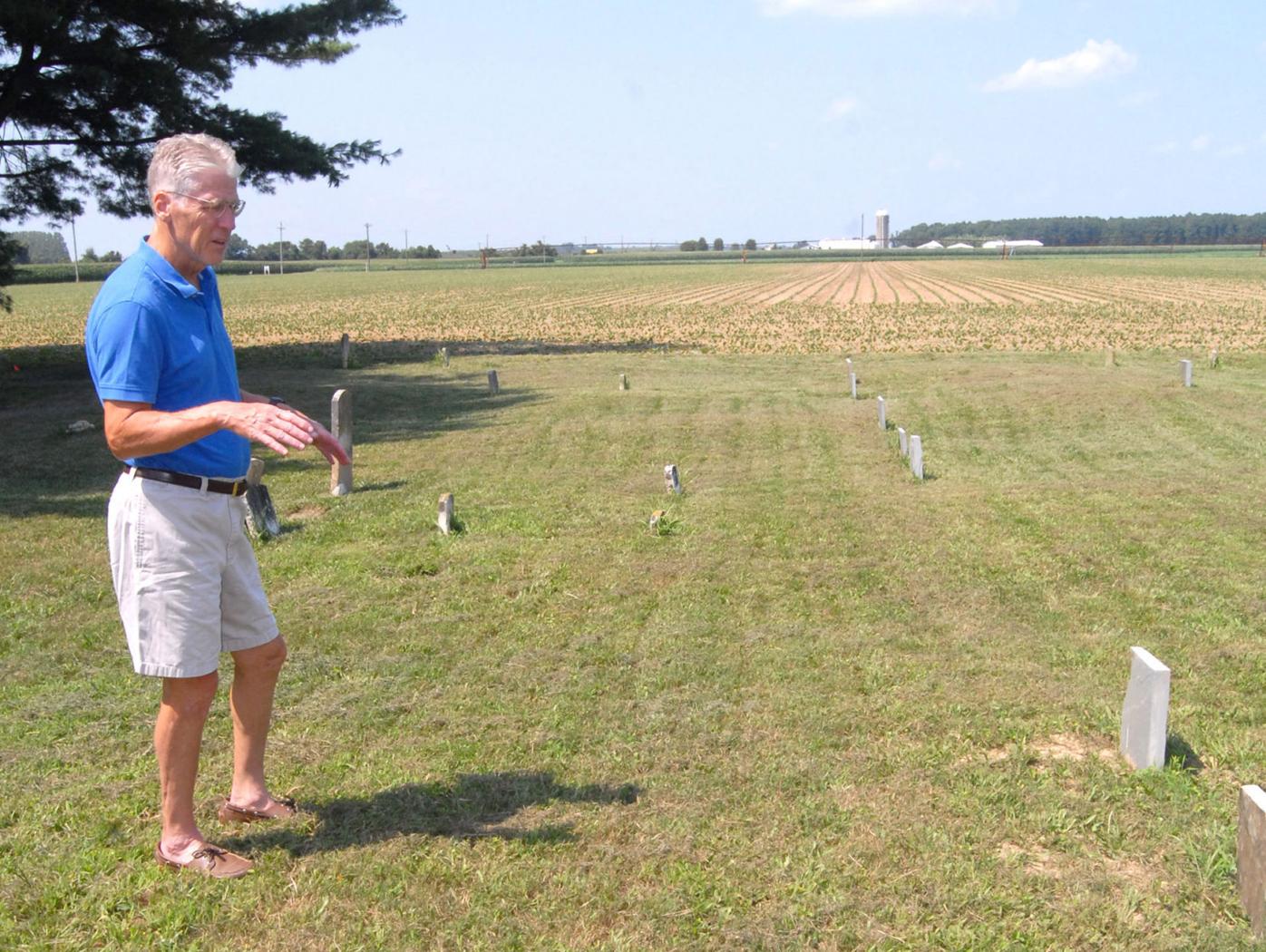 The monitor, on ground-penetrating radar used by Matthew Turner of GeoModel, shows an anomaly on the top of the screen which is likely an unmarked grave at Chesterville Cemetery.

The monitor, on ground-penetrating radar used by Matthew Turner of GeoModel, shows an anomaly on the top of the screen which is likely an unmarked grave at Chesterville Cemetery.

CHESTERVILLE — Confirming what genealogists and historians generally know about cemeteries — that there are a lot more graves than the number of tombstones — a ground penetrating radar survey of the Chesterville Cemetery revealed that the remains of 64 people buried there are in unmarked graves.

Four of those were victims of an 1851 mass murder.

The cemetery, located on Chesterville Bridge Road just east of the hamlet’s crossroads, was established on an acre there about 1842, the same time a Methodist church was built. The church is long gone, razed or removed in the late 19th century.

The survey was funded by John Lysinger, a Chesterville resident and the sole remaining member of the Chesterville Cemetery Association.

“They made me a signatory 20 years ago,” Lysinger said recently. “Now I’m the only one left.”

That’s because all the other members have passed away.

Lysinger also maintains the cemetery mostly on his own with occasional assistance from a couple of neighbors. He has repaired broken stones, trims bushes and in summer he can be seen mowing the cemetery grounds with a push mower, eschewing a riding mower to avoid knocking over tombstones.

At least 178 sets of remains are buried there, based on the 64 graves discovered added to the number of headstones. The oldest burial marked by a headstone contains the remains of 17-month-old Harriett A. Titus, who died in 1841, the same year that Hezekiah Masten and his wife Aletha donated the property for a church and the cemetery to the trustees of the Chesterville M.E. Church.

The GPR survey was done June 18 by Matthew Turner of GeoModel, a company headquartered in Leesburg, Va. Turner has been doing surveys with the ground-penetrating radar for more than 20 years and has surveyed numerous cemeteries and other sites and has even helped police in searching for evidence.

Last year he surveyed a cemetery in Kennedyville with good results.

As he systematically pushed around the 4-wheeled GPR unit, the size of a small lawn mower, over the areas in the Chesterville Cemetery with depressions or surface variations, a monitor on the device presented an image of the ground over which he passed. Anomalies were obvious on the monitor, revealing the unmarked burials

In a later interview, he explained the process.

“Radar goes into the grave and bounces off the top of the casket then bounces back,” to be recorded on the monitor. He said the radar is like other types of radar. “It’s a fancy fish finder,” he said.

The GPR he uses can scan to a depth of up to 30 feet if the soil is right, Turner said, noting that the sandy loam soil of the Chesterville Cemetery was very good for detection.

And he didn’t need to go 30 feet down to find the unmarked burials. The top of the graves in most cases were 2 to 3 feet below the surface indicating burials 4 to 5 feet deep.

As he encountered anomalies, he sprayed a line of red paint on the grass to mark them. At Lysinger’s request, he also attempted to locate, with little success, any underground remnants of the old church to help in delineating its boundaries.

One group of four red lines mark what may be the graves of the victims of the February 1851 mass murder near Galena which resulted in the deaths of William Cosden, his wife Mary Ann, his sister Amanda and Mary Ann’s sister Rebecca Elizabeth.

Cosden’s father lived near Chesterville, which explains why they were buried there. Their graves were never marked with tombstones.

One set of four burials are close to the marked graves of several people named Stephenson, a surname associated with the Cosden family. However, there’s no way to tell if they are the Cosden graves, short of getting a DNA sample or finding an original survey of the grave plots that tells exactly whose remains were interred in the 64 unmarked graves.

So far Lysinger has been unable to find a cemetery plot map and records of the old church are scanty.

The remains of two people, Rachel Schwatka and Catharine Lusby, are likely in two of the unmarked graves. Schwatka died in 1877 and Lusby in 1882. They are known to have been buried there but there are no tombstones with their names.

In fact, even the fate of the church is a mystery.

Once called “Oldside Methodist Episcopal Church,” there are few references to it after the 1870s.

Another church, the M.E. Church South, was built across the street in 1868 and it seems the church at the cemetery became disused not long after.

A correspondent writing for the June 17, 1873 edition of the Kent News stated that funds were raised to repair the church. The repairs were undertaken and the church reopened in December that year.

The 1877 map of Kent County shows both churches. No mention of the church could be found after that year.

Lysinger initially replaced the paint with little red flags and then in the first week of July he began the process of marking the once-forgotten grave sites with blank stones which he purchased himself. He enlisted the aid of several neighbors in placing some of the 12x24 and 18x24 stones. But it’s a laborious process.

“I feel it’s my obligation to do this,” he said.

As he walked through the cemetery Friday, July 16, he noted that about half of the blank stones are in place. He has enough for the 64 and maybe a few extra.

He pointed out depressions in the grounds where nothing was detected with the GPR survey.