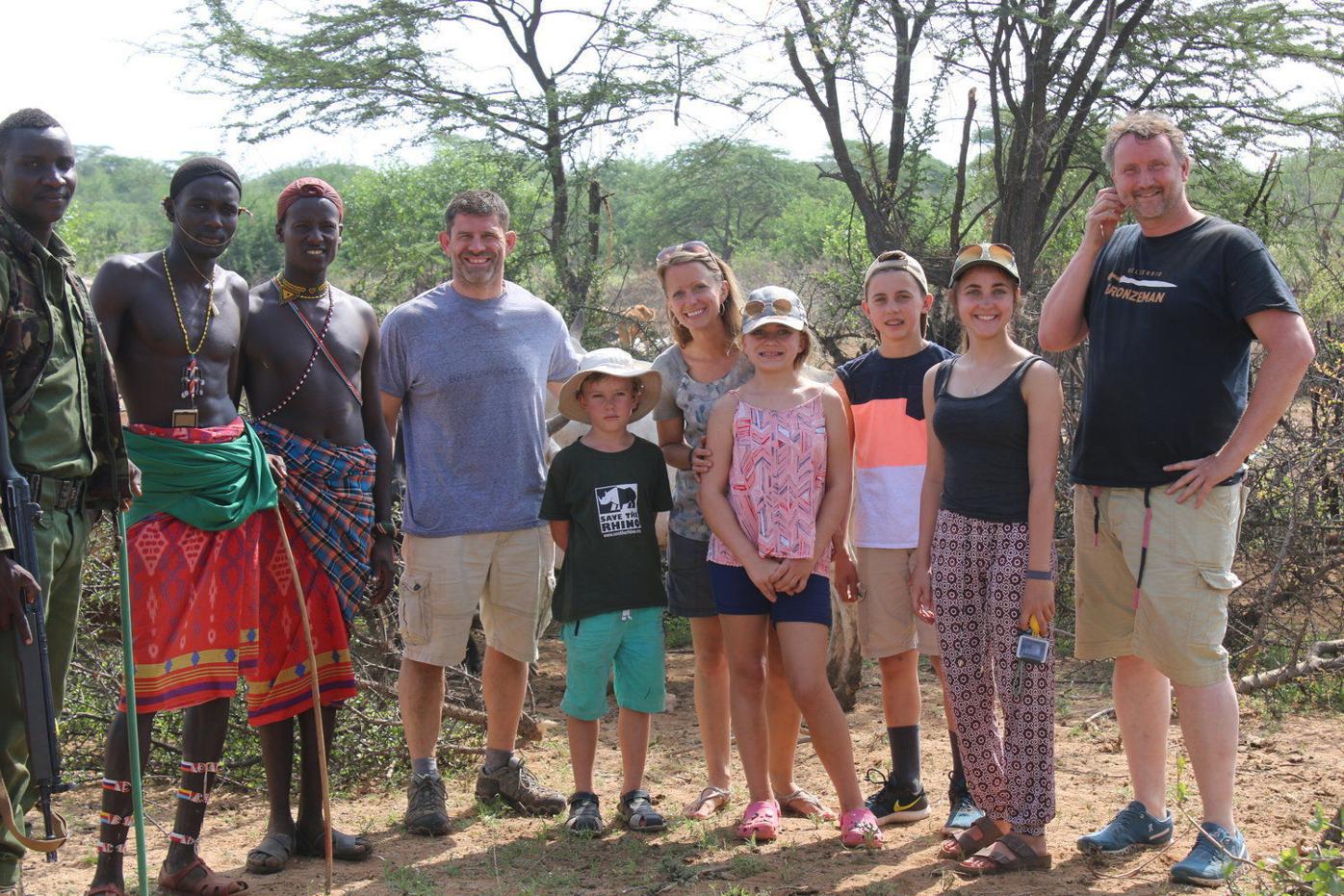 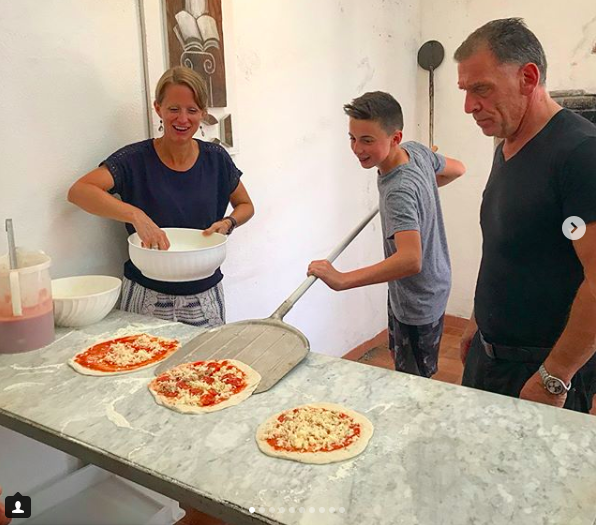 For the Schindlers, pizza making is always a family affair. Christina and son Billy enjoy a lesson from Chef John Nocita of the Italian Culinary Institute in this photo courtesy The Modern Stone Age Family. 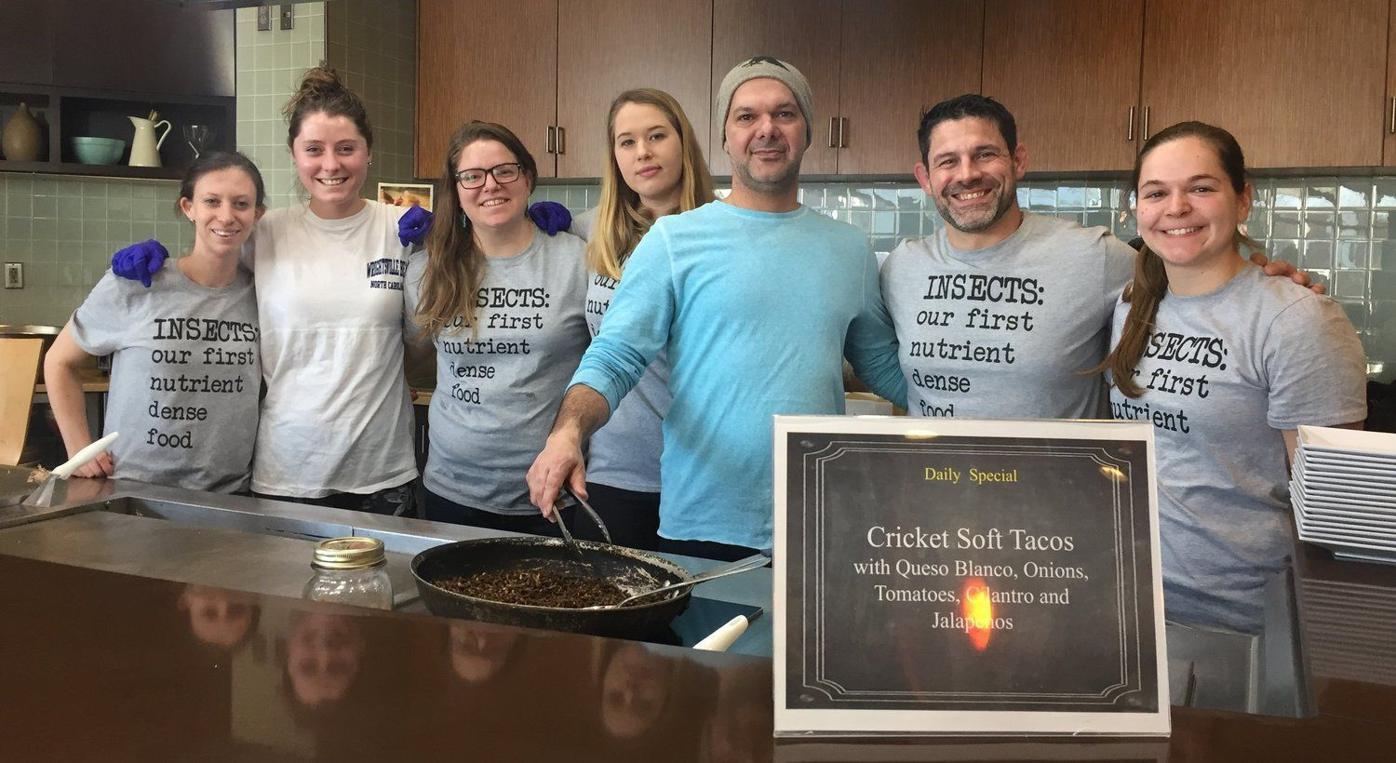 For the Schindlers, pizza making is always a family affair. Christina and son Billy enjoy a lesson from Chef John Nocita of the Italian Culinary Institute in this photo courtesy The Modern Stone Age Family.

CHURCH HILL — “It’s about balance. It’s about connections. It’s about learning to live and eat like humans again,” say the Schindlers, Bill and Christina.

The Church Hill residents and educators took their journey and shared it not only with their family, but through social media and the web to anyone who wanted to be able to share the experience of living life abroad for a year with them. Covering four continents and 13 countries, the Schindlers — along with their three children — embarked on their trip in August 2017 and returned to Maryland just before school began this past fall.

The two are self-described opposites. Christina formerly oversaw instructional technology at Queen Anne’s County Public Schools and now works for Caroline County, and Bill is an archaeologist-chef and expert in primitive technology at Washington College in Chestertown.

They quip, “she can build a website, but he can knap a stone tool.” Blending those opposite ends of the technology spectrum make for amusing conversations over fermented home-cooked meals, say the couple, but there is no denying they are both aligned to finding a healthy balance in this modern world.

Dubbed “The Modern Stone Age Family” by a news article in the London Times, the name quickly took hold.

Although, their travels and interest would soon gain notoriety, when Christina first began depicting the family’s adventures on Instagram she said, “We are far from perfect. If anything, The Modern Stone Age Family is a way to show how much we need to learn. By visiting different countries and learning from different cultures, we can develop a deeper understanding of what it means to be human and truly how to live again — not just be alive. This journey is about finding out how our family operates, how we can improve to be our best selves possible and how we can support one another along this journey.”

Their year abroad, living just outside of Dublin city center in Airfield Estate, a 38-acre farm, came at a time that was fitting for both of their careers. Bill was on a sabbatical from Washington College to conduct research and to write, while Christina was able to take a leave of absence.

That didn’t mean though that they were granted a year’s vacation, said Christina. They would continue to travel and work across Europe and Asia, and visited Thailand, Germany, Italy, Sicily, Slovakia, Greece, Crete, and in Africa, Kenya and South Africa to name a few of the 17 countries they visited.

The children‚ Brianna, Billy, and Alyssa, in high school, middle school, and elementary respectively — were enrolled in school while the family used Ireland for their European home base as an opportunity that allowed them to become very involved in the community, forging relationships with parents and other students along with colleagues.

No stranger to bringing his concept of living and eating like our earliest ancestors, three years ago Bill co-starred in National Geographic’s television series “The Great Human Race.” The year in Ireland was in many ways an extension of the National Geographic experience and was a powerful research collaboration bridging two academic institutions — Washington College in Chestertown and University College Dublin in Ireland — with Odaios Foods, a cutting edge food-service provider in Ireland to form an innovative Food Evolutions project.

The project fuses anthropological knowledge, food and farming sciences, culinary arts, and experimental archaeological evidence to encourage leadership, innovation, and change in modern food habits and culinary practices; and to educate the public to take control of their food and eat like humans again. The Food Evolutions project helped to lay much of the foundation on which Bill’s newest project, the Eastern Shore Food Lab at Washington College, is built.

Learning to cook from scratch is an important part of their family dynamic, said Christina, whether making homemade pasta, cooking fresh venison or baking a birthday cake, all three kids are hands on with their food and diet, and take an avid interest in their father’s work.

Spending a year together brought the family closer and allowed the couple not only to have quality time with each other, but also created new relationships with their children. Away from the constant flurry of their American lifestyle and friendships, Christina said, it allowed them to have more individual time with each child, to get to know them as individuals and deepen those relationships.

Christina said that during their year abroad Bill was able — via Skype and email — to complete plans for the Eastern Shore Food Lab that would be nearing completion on their return. And just recently, she and Bill were asked to present at an archaeology conference — his presentation on ancestral diets was followed by hers on using using social media to share research. It was more well received than she would have anticipated, she said.The journey afforded the Schindler family the opportunity to experience how food is harvested and prepared in different parts of the world.

Tracing the history of food and its preparations is of course, Bill Schindler’s passion, “This is what my work is all about ... prehistory, terroir, nutrient dense meaningful food,” he said.

Another highlight and one of Bill’s focus points at the college — insect eating — featured heavily when they visited Thailand. Bill had lobbied for many years to be allowed to serve insect-laden foods he prepared with his students at events at Washington College and was only recently granted the privilege of actually bringing the event into the dining hall so that the campus community could experience eating insects in a context that conveyed the message that what they were eating was, in fact, real food.Nearly a year later and back in the states, Christina wrote to their Modern Stone Age Family followers, “We miss Ireland. A lot.”

“It’s crazy how some things will hit you out of nowhere and you realize how much you have been missing something and didn’t even know it. Today that happened for me. We were driving to go shopping to get decorations for the Eastern Shore Food Lab and Ed Sheeran’s ‘Castle on a Hill’ came on. Before I knew it, tears were welling in my eyes. No more random castles as we drive down back country roads. No more walking down our hill and hopping on the LUAS to head into Dublin for a night out. Our life (in the states) is wonderful, but totally different living (in Ireland).”

From family pizza-making lessons with Chef John Nocita of the Italian Culinary Institute to the Valley of the Temples in western Sicily, and a behind the scenes tour of Google headquarters in Dublin — the Schindlers had nothing less than a whirlwind year.

She said she knew it couldn’t last forever, but that doesn’t mean she doesn’t miss the trip planning and more relaxed mornings enjoying coffee with Bill.

“It was truly magical,” says Christina, “and I sincerely hope everyone can experience a fraction of what we had as a family last year. Love to you all.”

Now, the next chapter of the Schindler’s journey continues. The Eastern Shore Food Lab at Washington College recently launched — providing an infrastructure from which to reconnect students and the community with their health, environment and one another through an approach that fuses a comprehensive understanding of our ancient dietary past with modern culinary techniques in very accessible, meaningful and practical ways.

The book Bill was writing during his sabbatical leave is nearly complete and will be available soon, Christina said.

Over the Christmas break, the entire family is learning the 6,000-year-old process of nixtamalization first hand from traditional groups in the mountains of Oaxaca, Mexico. Although this ancient food processing technology is the only way to make available to the human body all of the nutrients in corn — it is practically absent in the modern western world.

And, of course, they have plans to return to Ireland in January for a brief reunion with their new found Irish friends, and are already scheming how to stretch airline miles and get flight deals to visit their other new friends in places like Kenya, Crete and Mongolia, said Schindler.

If anything, this year abroad for the Schindlers have taught them just how culturally rich and diverse the world is and, that food is a powerful vehicle through which to experience it. Gathering, preparing, and sharing food with people from all walks of life has allowed them to not only connect with other people, but also with their health, environment, and one another in life a changing ways.

And, for the Schindlers, that is what eating like humans is all about.

Follow along with Bill’s work at @drbillschindler and www.ancestralinsight.com as well as the Washington College Eastern Shore Food Lab at @esfoodlab.