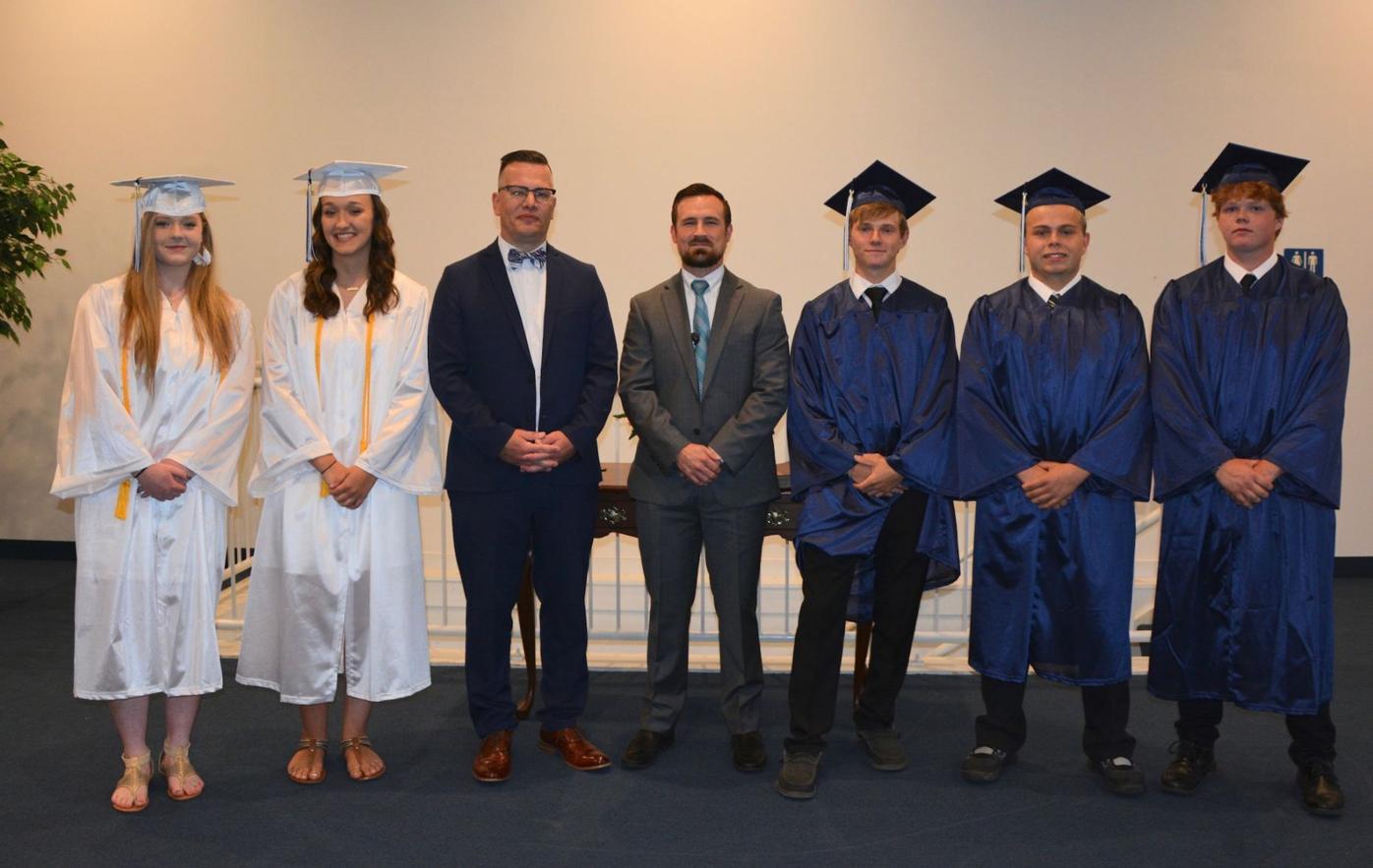 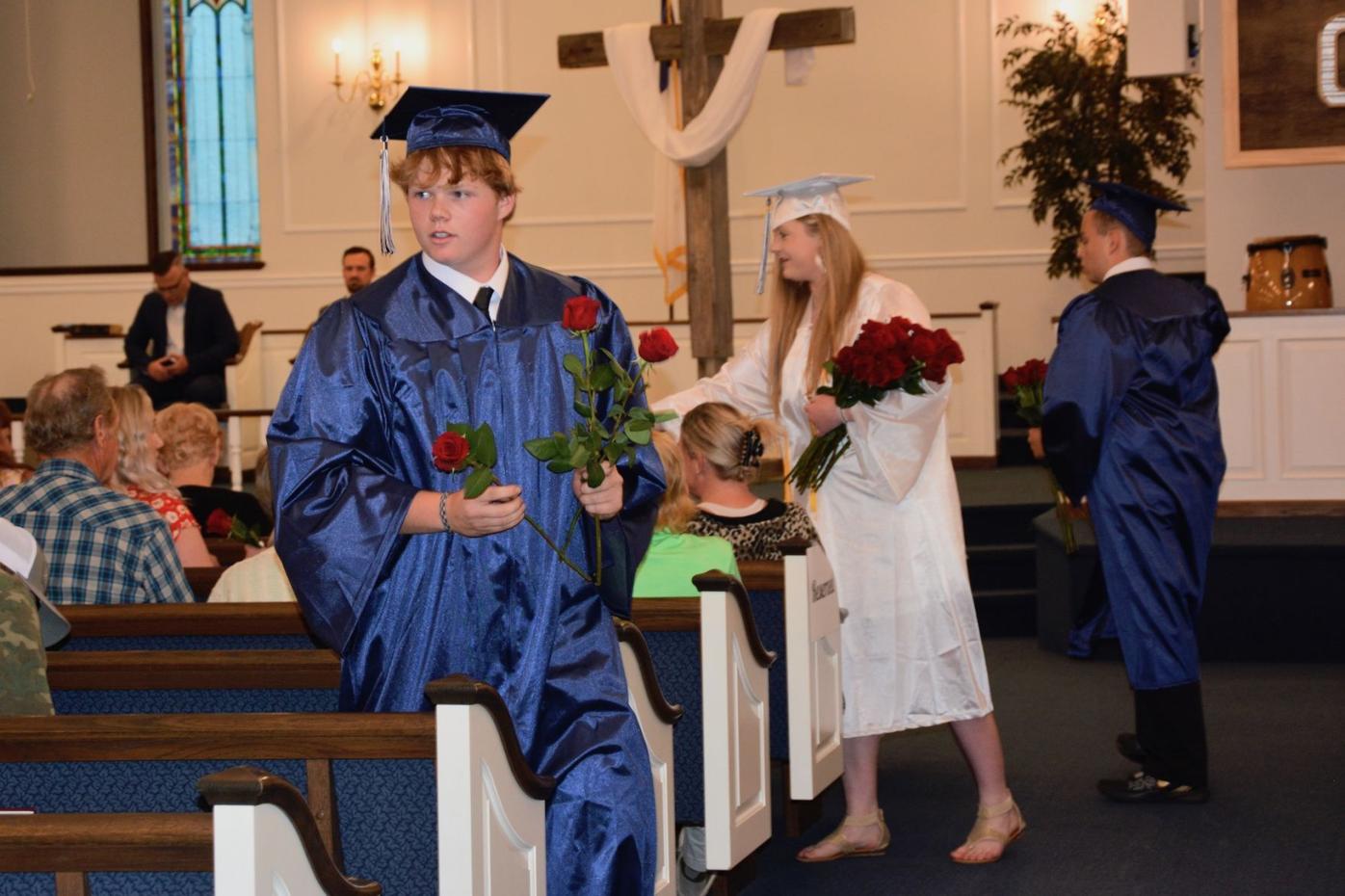 William Andrew “Drew” Cornelius, foreground, and his Chestertown Christian Academy classmates hand out roses to parents and others who are important to them Friday night, May 28. This is a tradition of CCA’s commencement.

William Andrew “Drew” Cornelius, foreground, and his Chestertown Christian Academy classmates hand out roses to parents and others who are important to them Friday night, May 28. This is a tradition of CCA’s commencement.

CHESTERTOWN — Rudy Draper is a realist.

On Friday night, he told Chestertown Christian Academy’s graduating seniors that he didn’t expect them to remember much about the commencement address he was about to give.

He had once been where they were — excited about walking out the door with a diploma in hand, eager to step out into the so-called real world.

Most of what had been preached to him and his classmates fell on deaf ears, or was long forgotten, Draper said, making a personal connection to the soon-to-be graduates seated in the front pew of Chestertown Baptist Church.

His message was simple and straightforward, and he honored his promise to be brief.

Draper asked the Class of 2021 — Sam Brice, Drew Cornelius, Ally Lloyd, Matt Sadzinski and Emma Stoltzfus — to remember the leaders who have been behind them and the leaders who are ahead of them.

CCA teachers and staff, family and community members have taken the graduates as “far as we can,” loved you and cherished you, said Draper, who is the youth pastor at Chestertown Baptist Church.

“You will go on new adventures that we can’t go with you,” he told the graduates.

The good news is that there are others waiting to help, said Draper, who urged the students to seek out those who will invest in them, who will be there to offer advice and to hold them accountable.

Most of all, he said, trust in the Lord, who has never broken a promise.

“If you do that, you can leave this place tonight with strength and courage,” Draper said as he wrapped up his keynote address.

Striking a similar tone, valedictorian Emma Stoltzfus told her classmates to have faith in where they will go and to enjoy the journey.

“Don’t forget what we’ve learned here,” she said of CCA, which she described as a second home and the faculty, staff and students as family.

“My hope is that we will love others the way we have been loved,” said Stoltzfus.

Salutatorian Ally Lloyd said she doesn’t have a written-in-stone plan for the future. She’s still learning — about life, about who she wants to be as a person and who she doesn’t want to be.

She said the one thing she is certain of is that she wants to live a life of meaning.

This was CCA’s 42nd commencement.

Graduates presented roses to their parents and others who are important to them, scholarships were announced and there was an alumnus testimonial, this year delivered by Jared Brice ’17, whose younger brother Sam was graduating.

In what has become tradition, CCA celebrated its commencement on the eve of the extended Memorial Day weekend with ceremonies in the adjoining Chestertown Baptist Church. The formal ceremony took place in the front of the church in the altar area, where Pastor Shane Lankford (CCA Class of 1993) handed out the diplomas and first-year Principal Thomas Hudson turned the tassel on the cap of each of the graduates.

In voting by the faculty, high school juniors and their senior classmates, Sadzinski was chosen as Mr. CCA and Stoltzfus was selected Miss CCA as the best representatives of what it means to be a Chestertown Christian Academy student.

Stoltzfus also received the $1,000 Sarah and Rachel Baugher Scholarship as the graduating senior with the highest grade point average.

The five rising seniors in the Class of 2022, after being passed the “torch,” led the recessional, each carrying a battery-operated candle.