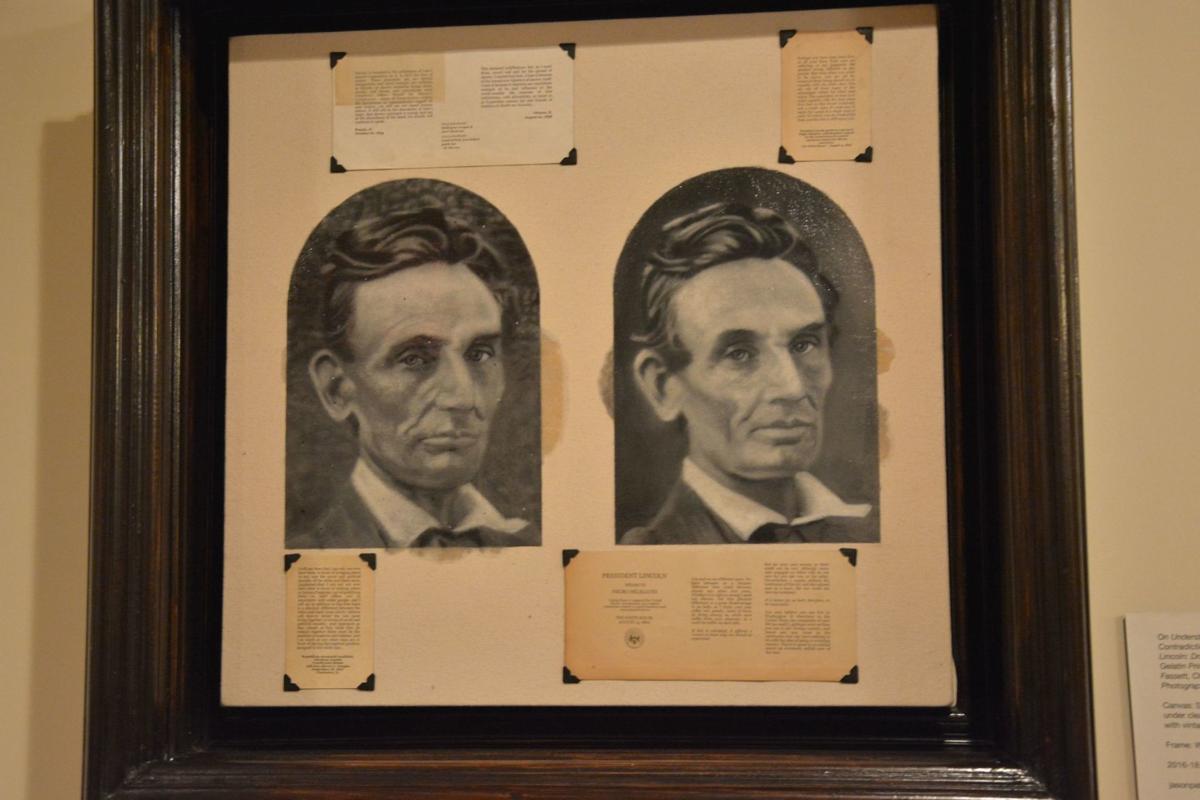 In his “duality” portraiture of Abraham Lincoln, artist Jason Patterson uses a change in tone to the same photograph to show the progression in Lincoln’s thinking about slavery and the role of freed African Americans. 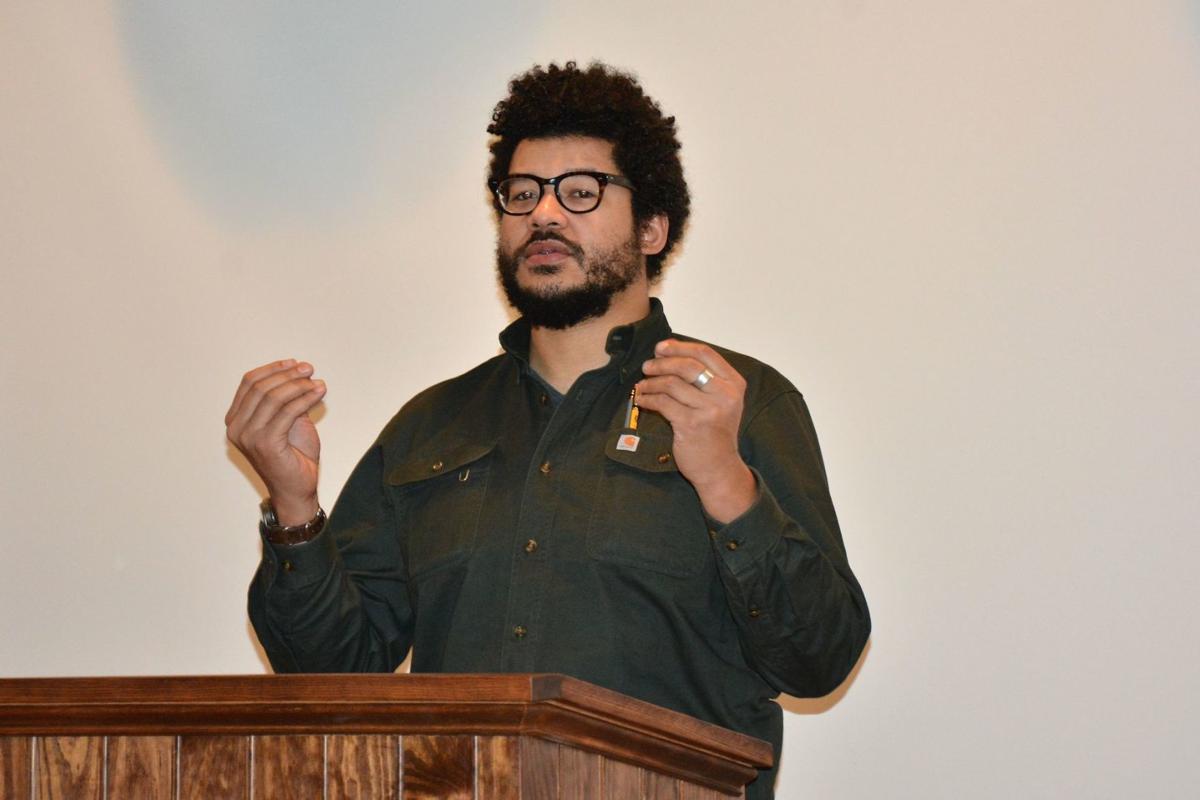 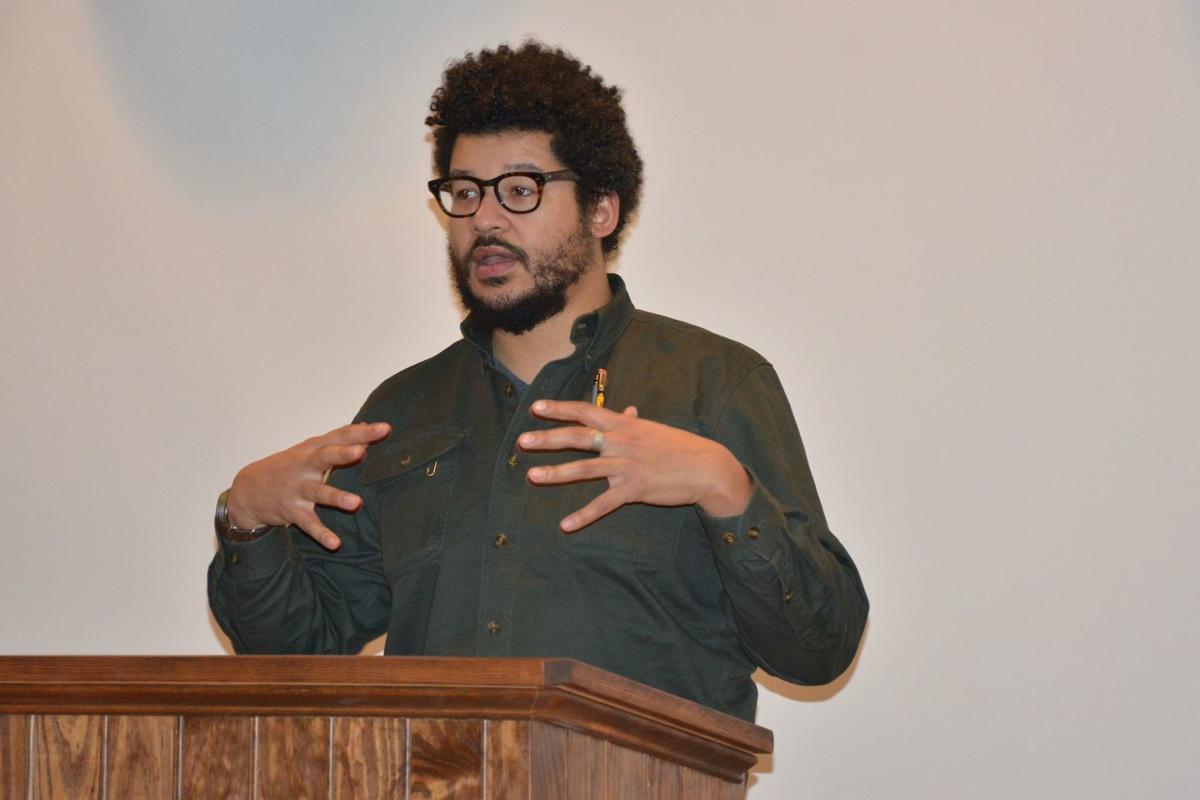 In his “duality” portraiture of Abraham Lincoln, artist Jason Patterson uses a change in tone to the same photograph to show the progression in Lincoln’s thinking about slavery and the role of freed African Americans.

CHESTERTOWN — Jason Patterson introduced himself to the Sumner Hall audience Feb. 21 as an artist and an historian, working primarily in portraiture to recount primarily the people and the eras that are significant to African Americans.

As the presenter at this year’s Henry Highland Garnet Symposium, Patterson raised the profile of the abolitionist senator from Massachusetts for whom the Grand Army of the Republic post in Chestertown is named.

While acknowledging that the idea of his work is largely talking about African American history, Patterson said what he really tries to focus on are “the things that I feel like are missed in that common sort of narrative when we think about our education from K (kindergarten) to 12, and what’s missing in that can sort of inform us on what we’re dealing with in the present.”

He said he reads a lot and does his own research — trying to be as much of an historian as he can — so he “can think about making work on things that are missing.”

This was Patterson’s segue to Charles Sumner, a pivotal figure in African American history that Patterson said has been overshadowed by less-worthy contemporaries or overlooked altogether.

That’s problematic, Patterson said, because of the men of Sumner’s era, “his progression and his progressive thinking when it comes to abolition and racial equality, he was closer to us than arguably anybody else of his generation. He got it before most Americans did.”

“I wish that we as a nation would know more about Charles Sumner because there’s so much more we can learn from him,” Patterson said. “We think of Lincoln as this great emancipator, but Charles Sumner was much more right than Lincoln.”

Patterson recounted how a South Carolina congressman bludgeoned Sumner with a cane on the floor of the Senate in 1856 after Sumner delivered an anti-slavery speech where he called out slave owners by name.

The fight left Sumner deformed and it nearly killed him, “but he survived it and got back to work and it certainly didn’t slow him down as far as how fiery and radical he was,” Patterson said.

Sumner led the fight for a congressional Reconstruction program after the Civil War that sought to ensure liberty, equality and enfranchisement for black men. He was instrumental in the impeachment of President Andrew Johnson. And he was against the United States’ annexation of the Dominican Republic, which he portrayed as American imperialism.

“In the mid-19th century he was talking like a bleeding heart liberal,” Patterson said.

Patterson lamented that not enough has been written about Sumner. What has been written, including David Donald’s Pulitzer Prize-winning two-volume biography, is incomplete.

“You can tell that he is annoyed by how radical Sumner was,” Patterson said of Donald, whom he identified as a Mississippian. “He doesn’t understand that Charles Sumner was doing the right thing.”

There is no black perspective in Donald’s book, Patterson said, and he finds that disturbing. “You’re talking about THE abolitionist senator, and you’re not bringing up black people. That’s weird.”

He said Donald never talks about how Sumner became an abolitionist, another glaring ommission. There is no mention that Sumner’s father, a Harvard Law School graduate who went on to become the sheriff of Suffolk County, Mass., called for Boston to integrate its schools in the 1790s.

“Even though Donald probably didn’t really switch, he saw what protest was, he saw what you do when you just say ‘no’ and why you need to do that. And I think that opened him up to sort of understand really what Sumner was doing. He (Donald) still didn’t really get it though.”

As part of his hour-long presentation, Patterson discussed some of his artwork that was on display at Sumner Hall.

He talked about the “duality” of Abraham Lincoln. This can be seen in two portraits of Lincoln — the same photograph with different tones to reflect the progression in Lincoln.

Patterson said Lincoln was very much a conservative regarding the ending of slavery, that it had to happen through law and not radical means.

Patterson described Lincoln, the president who issued the Emancipation Proclamation, “as fundamentally a white supremacist. He was of the time that he was.”

But what differentiates Lincoln from many of his contemporaries is that he was willing to learn, Patterson said.

From 1858 up until the time of Lincoln’s death seven years later, you see a progression “of him getting better and better,” Patterson said. “It was slow but it was creating good things with the power that he had.”

Lincoln was a supporter of colonization, setting aside national funds for the relocation of freed blacks to Africa or the Caribbean.

Patterson was balanced in his discussion of Lincoln, which can be seen in his portraiture of Lincoln.

Patterson said we would be better served if we understood what was great about Lincoln as well as his faults.

In his closing remarks, Patterson said he hoped through his art to be able to “open people’s eyes to understanding everything. ... There is so much more that we can learn.”