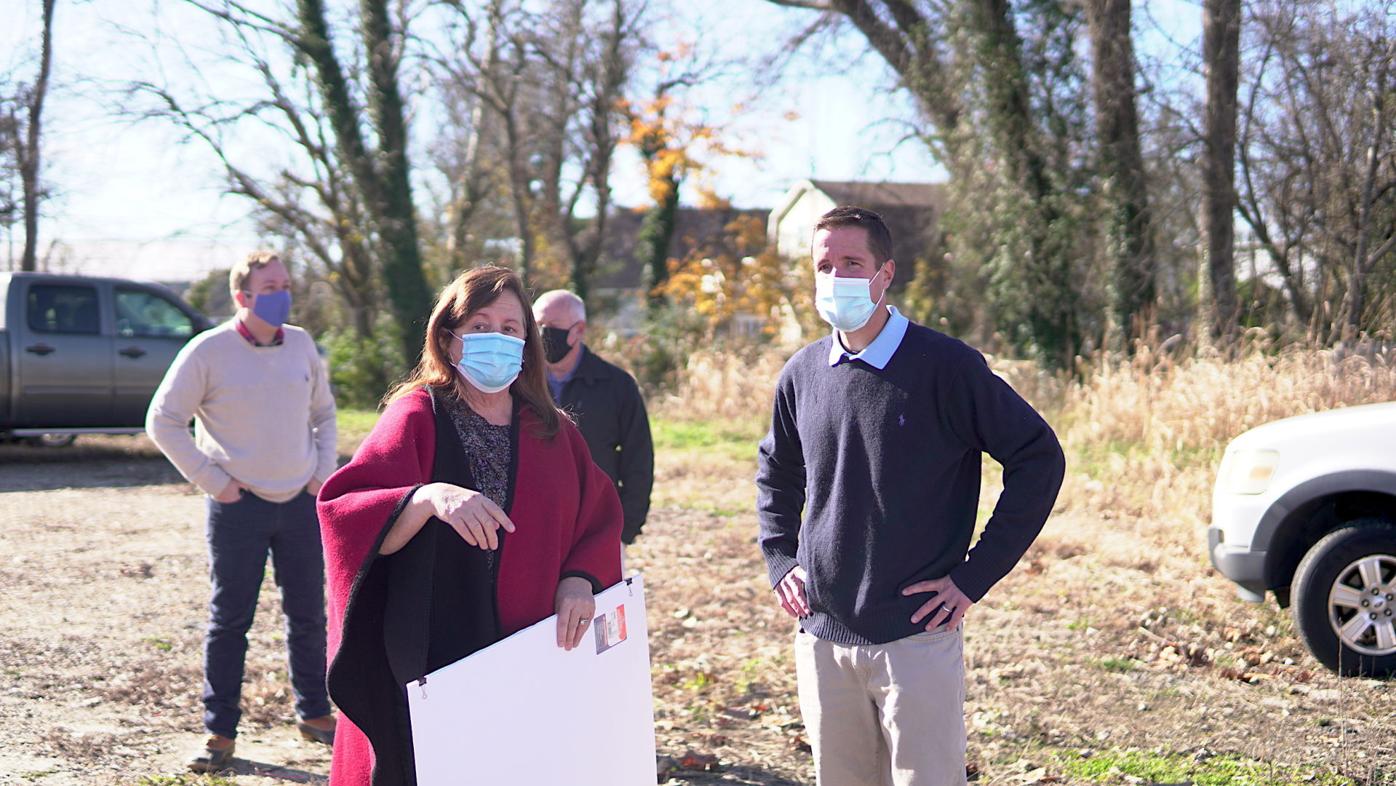 Frank Stout and Pat Esher prep for their meeting with municipal and county officials regarding the value of Program Open Space to the future construction of Cannery Park. 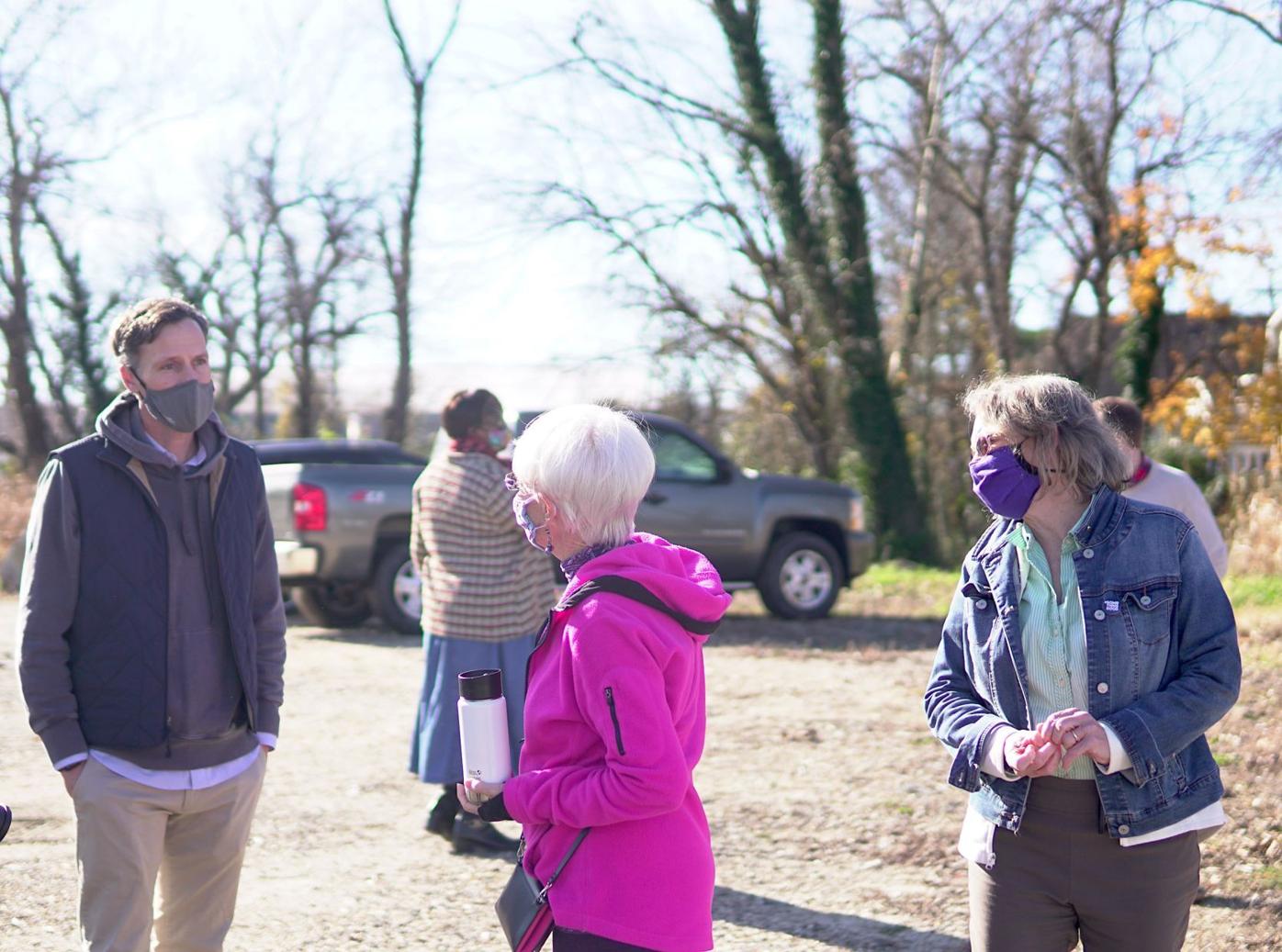 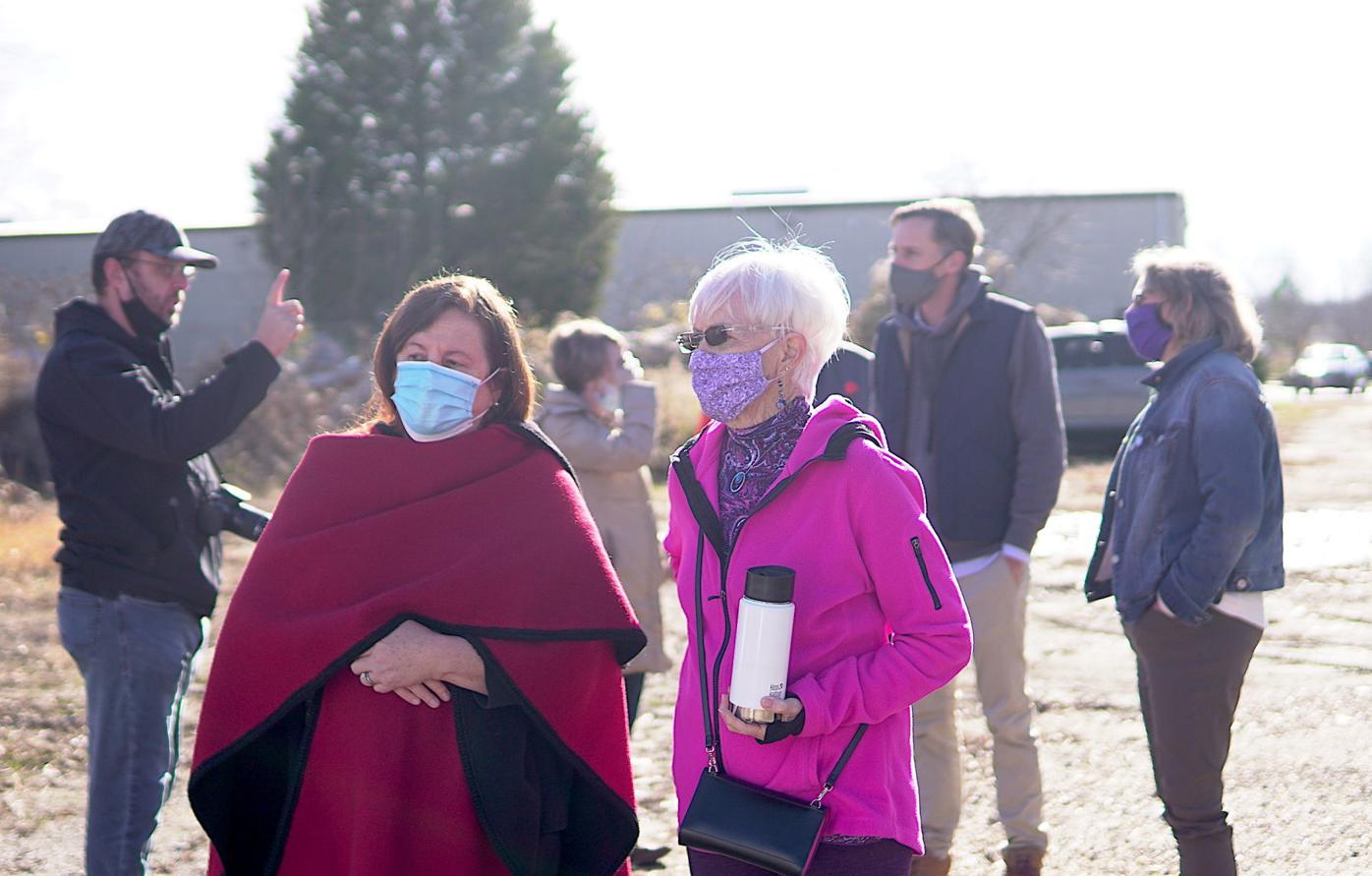 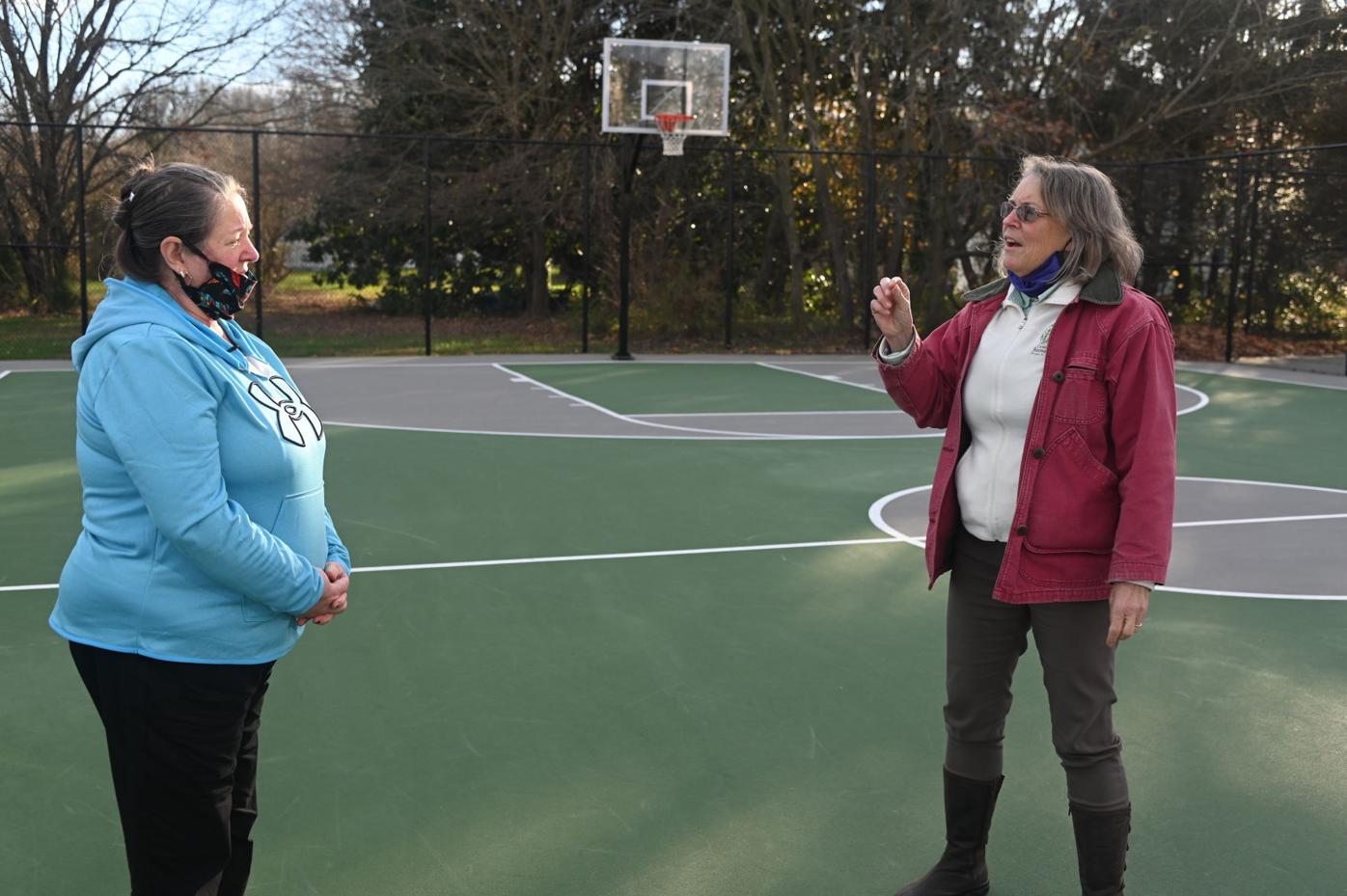 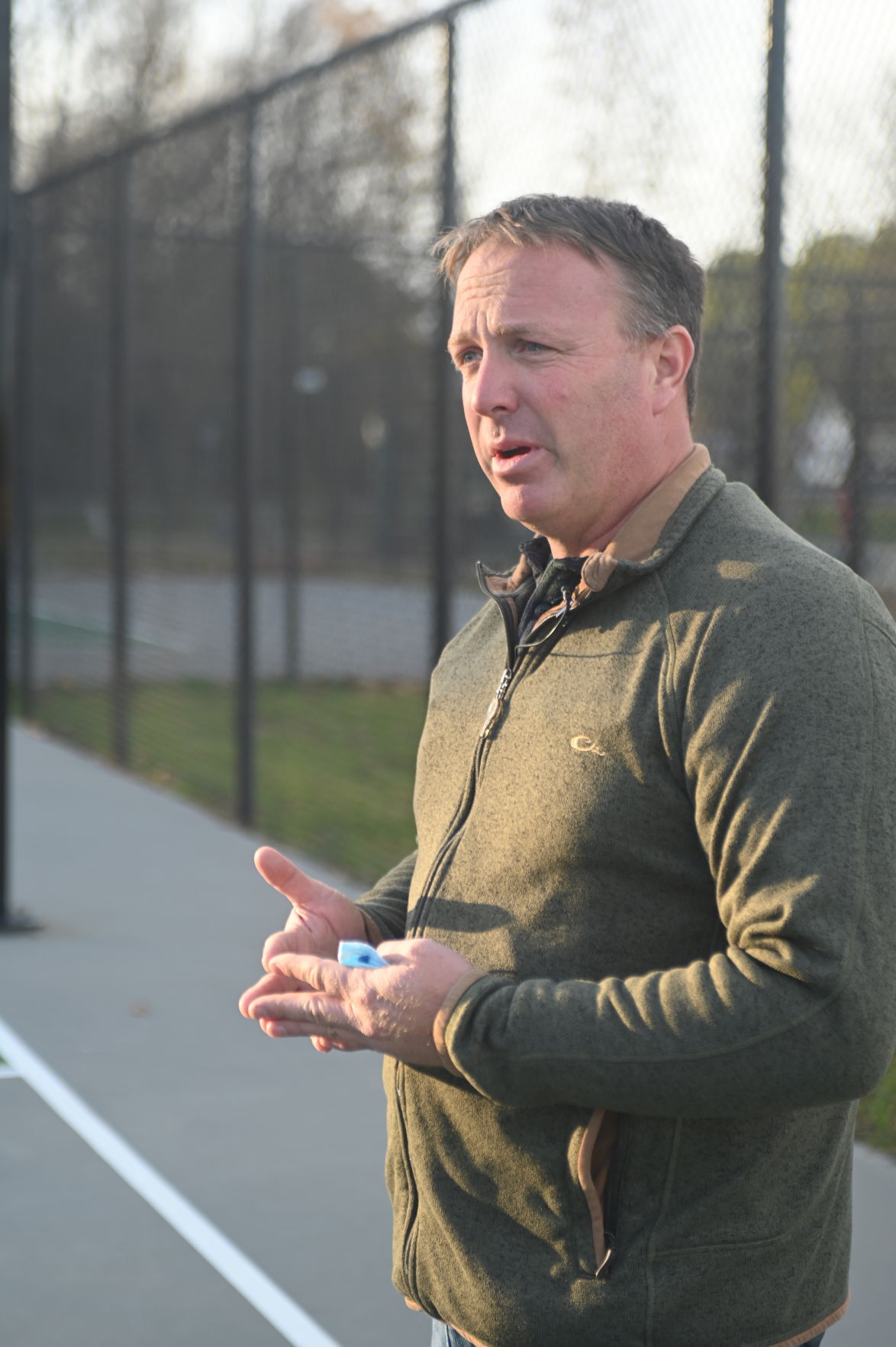 Del. Jeff Ghrist talks about the importance of Program Open Space in providing funds for local parks like this one in Goldsboro. Goldsboro Community Park features a basketball court, tennis court and skate boarding track. It even has a book trading box and a jungle gym for smaller kids. 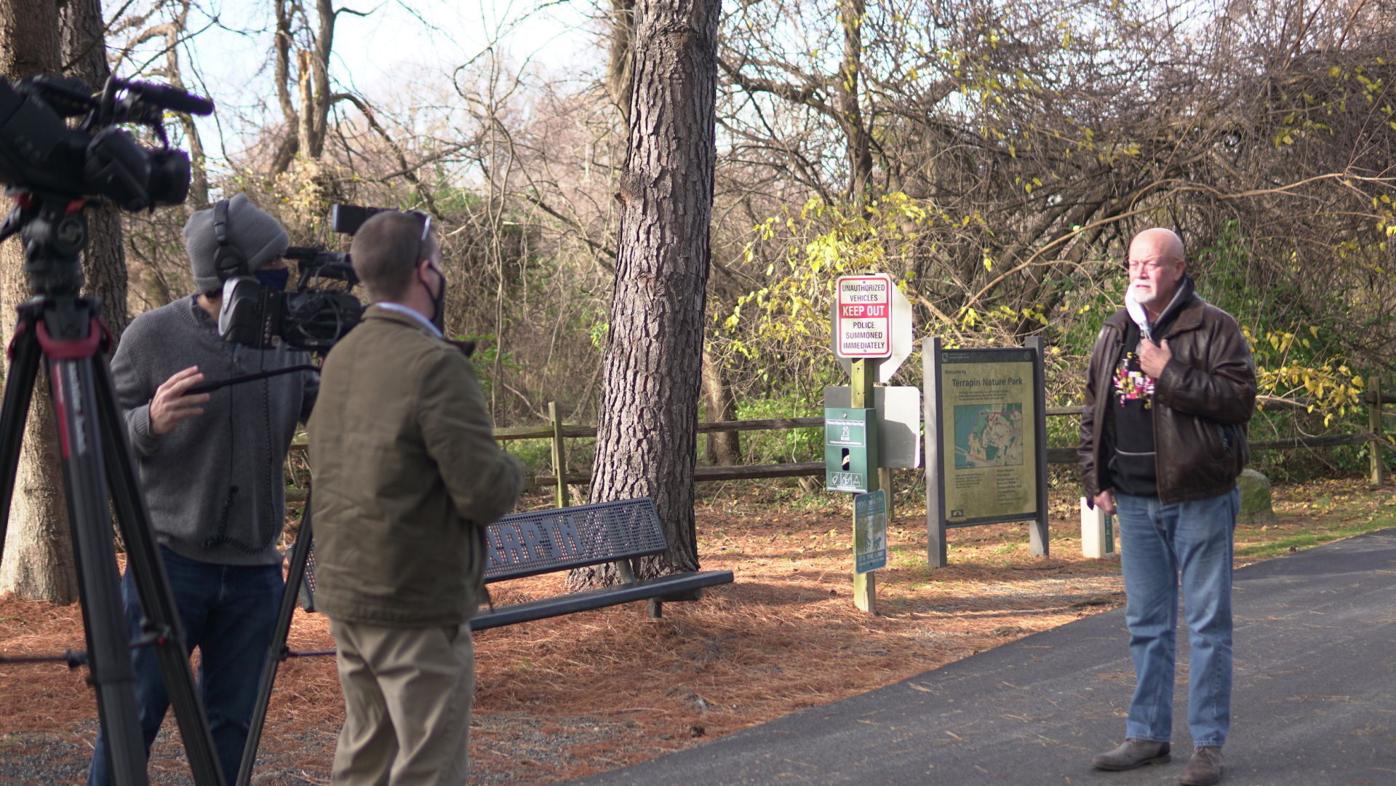 Del. Steve Arentz talks about the importance of Program Open Space to help create parks and nature areas like Terrapin on Kent Island. 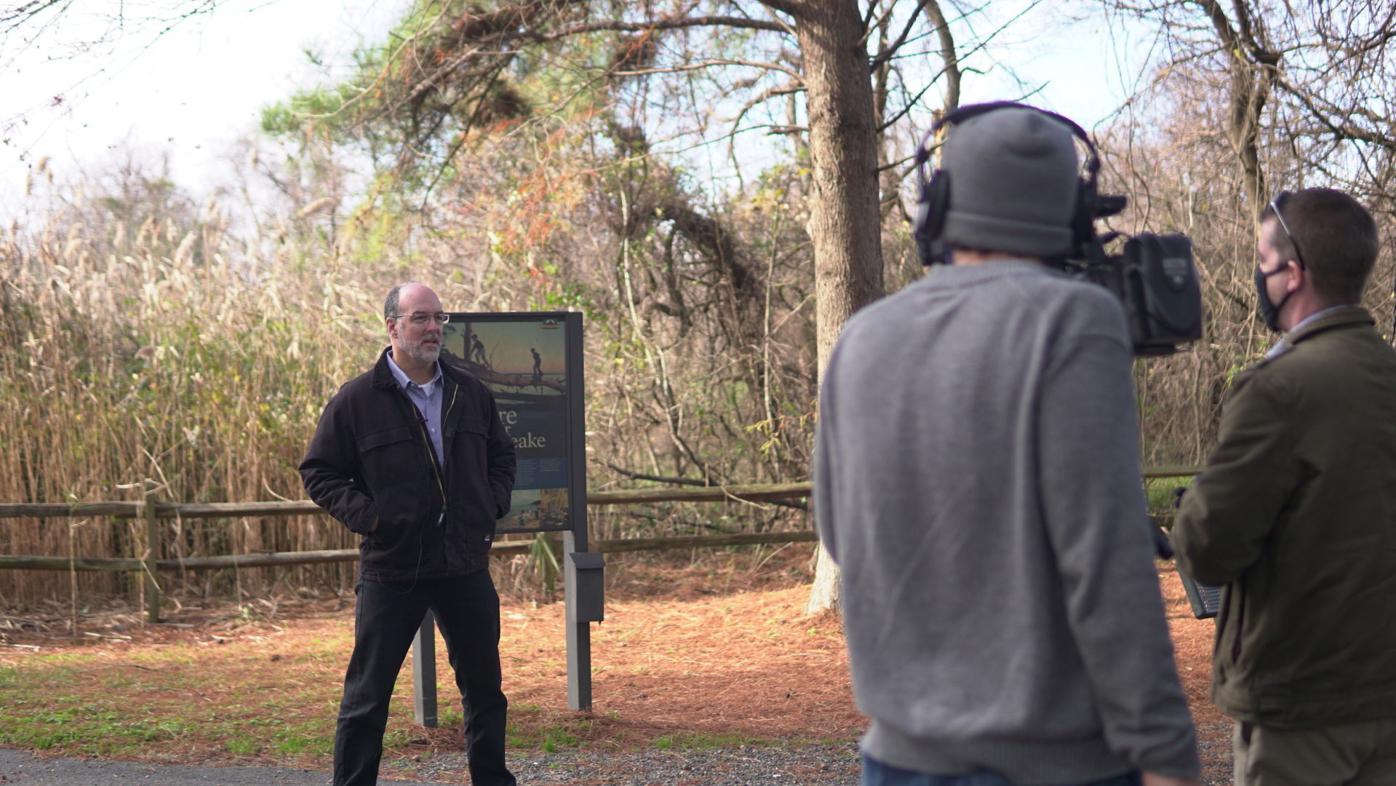 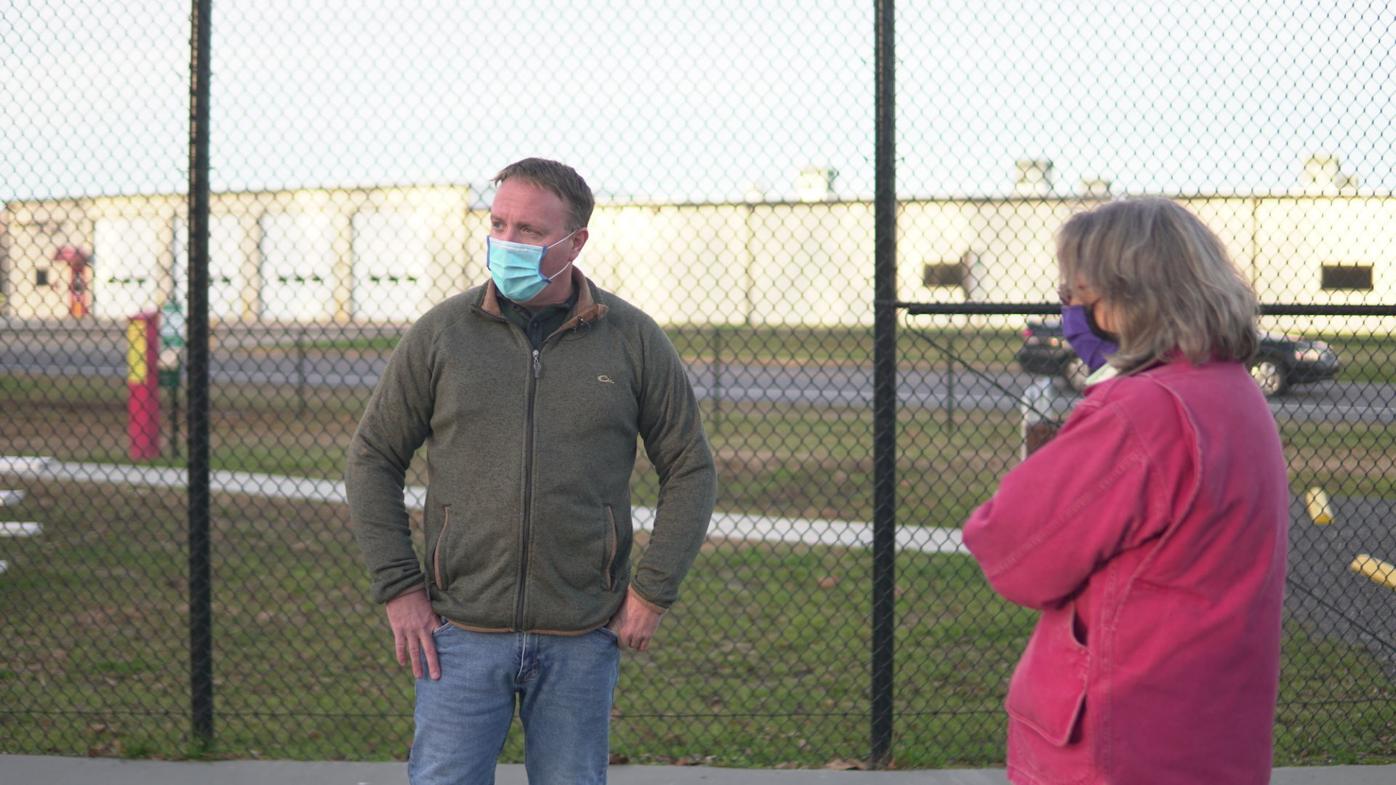 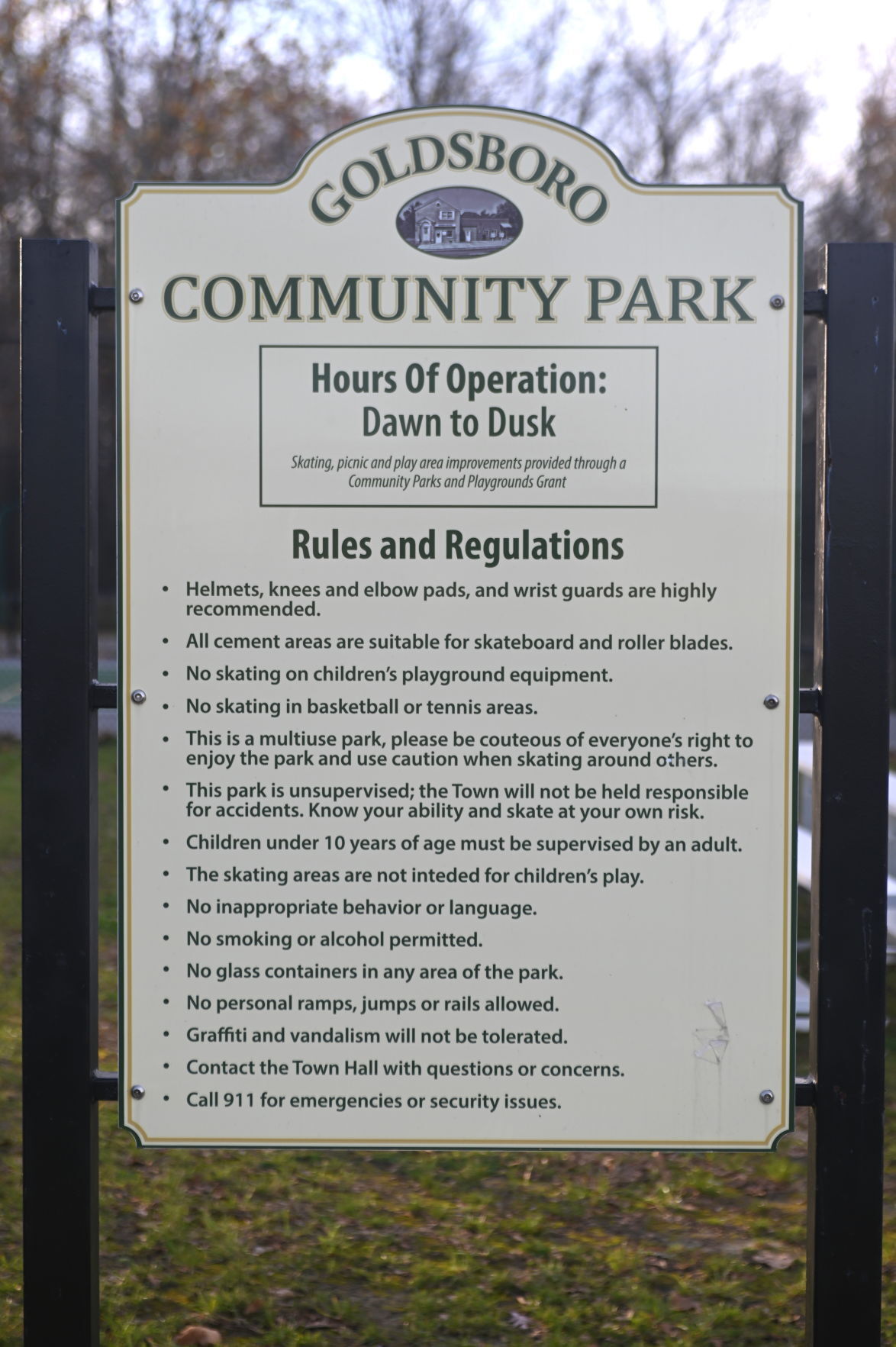 The rules are clearly stated at Goldsboro Community Park. 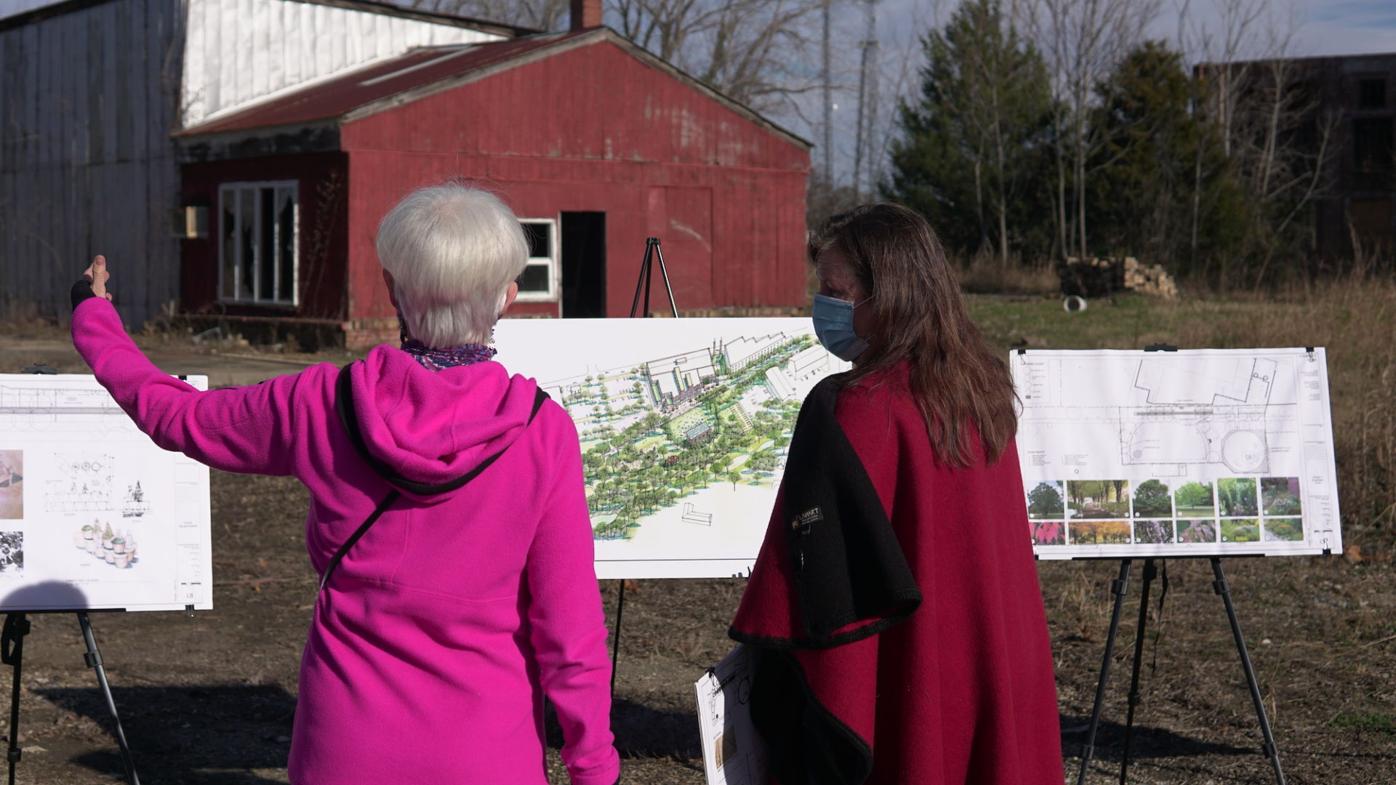 Frank Stout and Pat Esher prep for their meeting with municipal and county officials regarding the value of Program Open Space to the future construction of Cannery Park.

Del. Jeff Ghrist talks about the importance of Program Open Space in providing funds for local parks like this one in Goldsboro. Goldsboro Community Park features a basketball court, tennis court and skate boarding track. It even has a book trading box and a jungle gym for smaller kids.

Del. Steve Arentz talks about the importance of Program Open Space to help create parks and nature areas like Terrapin on Kent Island.

The rules are clearly stated at Goldsboro Community Park.

CAMBRIDGE — Legislators from District 36 and District 37A serving Dorchester, Talbot, Queen Anne’s and Caroline counties joined local recreation and parks department directors and the Maryland Recreation & Parks Association on Dec. 3 to support and celebrate the legacy of Program Open Space.

The support from these local government leaders and advocates came from four distinctly different public park facilities in various stages of development and active public use: the future Cannery Park and rail trail in Cambridge, the Frederick Douglas Park on the Tuckahoe in Talbot County, the Cross Island Trail and Terrapin Park on Kent Island and the Goldsboro Community Park in Caroline County. Each of these facilities has been funded with Maryland Program Open Space grants.

Del. Steve Arentz, R-36-QA, said, “POS is one of the greatest tool in our basket to help our local counties. And we have been a huge benefactor in Queen Anne’s. Look at our trails, tennis courts and sport facilities!”

Steve Chandlee, Queen Anne’s County parks director, reported public use of the county parks has been significantly elevated during the pandemic response, requiring temporary increases in park ranger operations and maintenance activities to keep up with the public demand.

“Litter free parks, cleared trails and beautiful beachfront areas are what the public expects,” Chandlee said, “and POS is the capital funding resource we will use to install permanent restroom facilities and expanded parking at the Terrapin Park/Cross Island trail hub in 2021.”

Maryland Program Open Space is the funding wizard behind the public park development curtain. It has a 50-year legacy and is considered a conservation policy model throughout the country. When real estate property sells, one half of 1% of the value of that sale is taxed, and those revenues are dedicated at the state level for land conservation and/or public recreation projects.

“The public sees the playground and the basketball courts, and they love them,” said Del. Jeff Ghrist, R-36-Caroline, at the Goldsboro Community Park. “Our local elected officials in the town of Goldsboro and Caroline County know that without Program Open Space, small towns like this one could not afford to provide a park for people to gather and play.”

Caroline County Parks and Recreation Director Sue Simmons said, “I value and appreciate open spaces. Thanks to Project Open Space and the real estate transfer tax, we could renovate this park. Public use is through the roof because of COVID.”

Virginia Albers, Goldsboro’s town clerk, agreed and added, “On good weather days and the weekends, this place is packed … The kids are full on during the weekend — the tennis court, pickle ball. Since school is out for COVID, they use this park more. I have seen a couple of outdoor birthday parties.”

Maryland State Parks and county park systems across the state report significantly higher use levels. John Nissel, MRPA president and parks professional in Montgomery County, confirmed, “The pandemic response demonstrates just how valuable our parks and recreation systems are the health and wellbeing of our community across the state and country. Fortunately, we have been investing in these systems for years.”

Investments in Program open Space projects have resulted in the preservation of 394,000 acres of land, led to the creation of jobs for state residents and contributed to the state’s climate resiliency. MRPA recently released a film short, produced by local film maker Rob Simmons of Shore Films LLC, to illustrate this impact.

A Caroline native, Rob Simmons said, “This (film) is really an invitation to the community to encourage state leaders to ensure POS continues, so my children have parks and trails to explore and call their own.”

Intensive user demand at these facilities is part of the future story for the Cannery Park and Rail Trail within the City of Cambridge. This 6-acre property is “a culmination of the collaboration between all levels of government and private enterprise,” said Frank Stout, Dorchester County Recreation and Parks Director.

Stout shared Bill Struever’s comments with the early morning assembly of local officials to envision the coming park: “Cannery Park is an essential element to the success of the office and event venue constructions — they are mutually beneficial.”

Pat Escher, city planner for Cambridge, predicted the summer opening of the rail trail pathway connecting Cedar Street to the Cannery Park parcel and described the design plans for the public space that will “transform” the city neighborhood.

“It’s good investment for the State when multiple parties come together, said Sen. Addie Eckhardt, R-37-Dorchester, who lives within a mile of the project. ”It’s the diversification that will sustain it and people want to go where the energy is. POS has been a part of this energy.”

In Talbot County, Del. Johnny Mautz, R-37B-Talbot, and Talbot Recreation and Parks Director Preston Peper looked out from the bluff along Tuckahoe River, a scenic overlook at the recently created Frederick Douglas county park. The 67-acre was also acquired with POS funds and its future development of additional trails, gardens, picnic facilities will again leverage POS funds with other private, state and local government resource.

Mautz said, “I’m really about principled government and smaller government and less taxes, but I always support Program Open Space because it an investment that goes right back into the community for years to come.”

For more information about Program Open Space go to dnr.Maryland.gov/land/ProgramOpenSpace. To see the Shore Films feature, put #programopenspace in your YouTube search. For information about the MidShore Parks , contact your recreation and parks department in Caroline, Dorchester, Talbot or Queen Anne’s counties.

The Maryland Recreation and Parks Association is a professional membership association designed to unite its members to provide high quality recreation and park services throughout Maryland. Learn more at www.mrpanet.org.