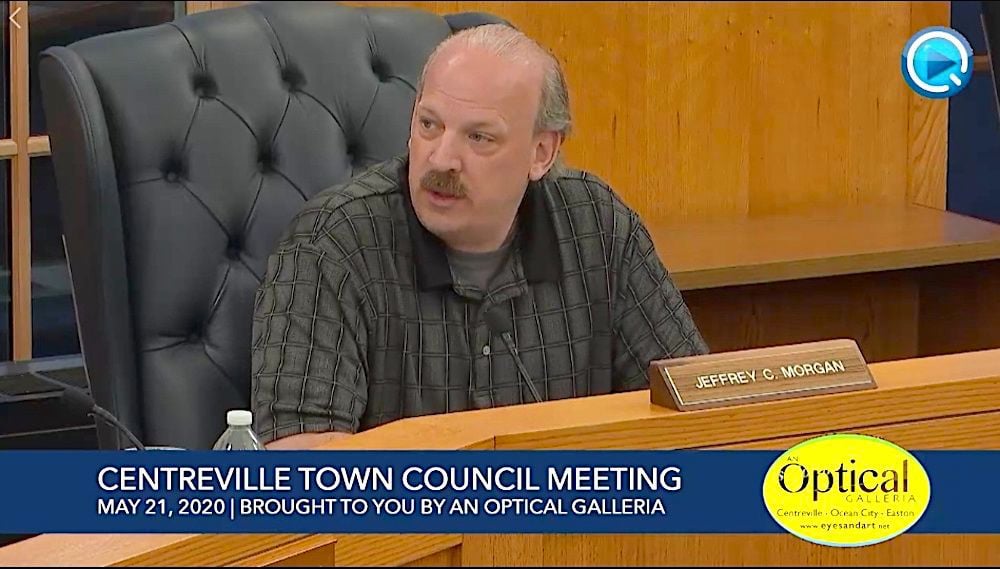 Centreville Town Council President Jeff Morgan tells fellow council members during a pandemic is not the time to be raising rates by 40 percent as he pleads for one of them to join him to reduce the amount. 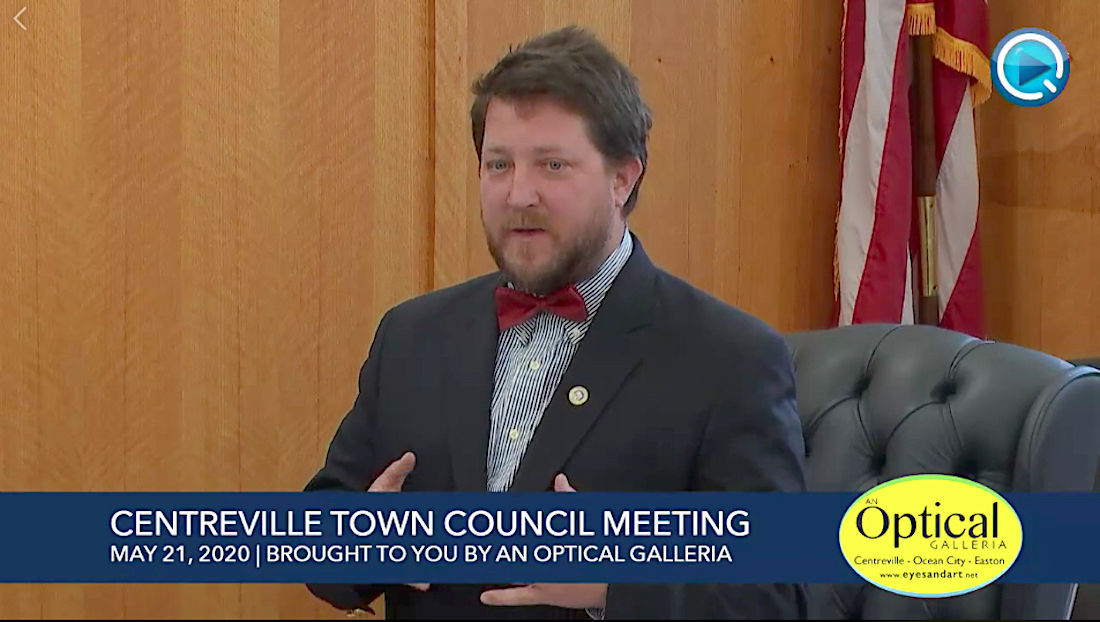 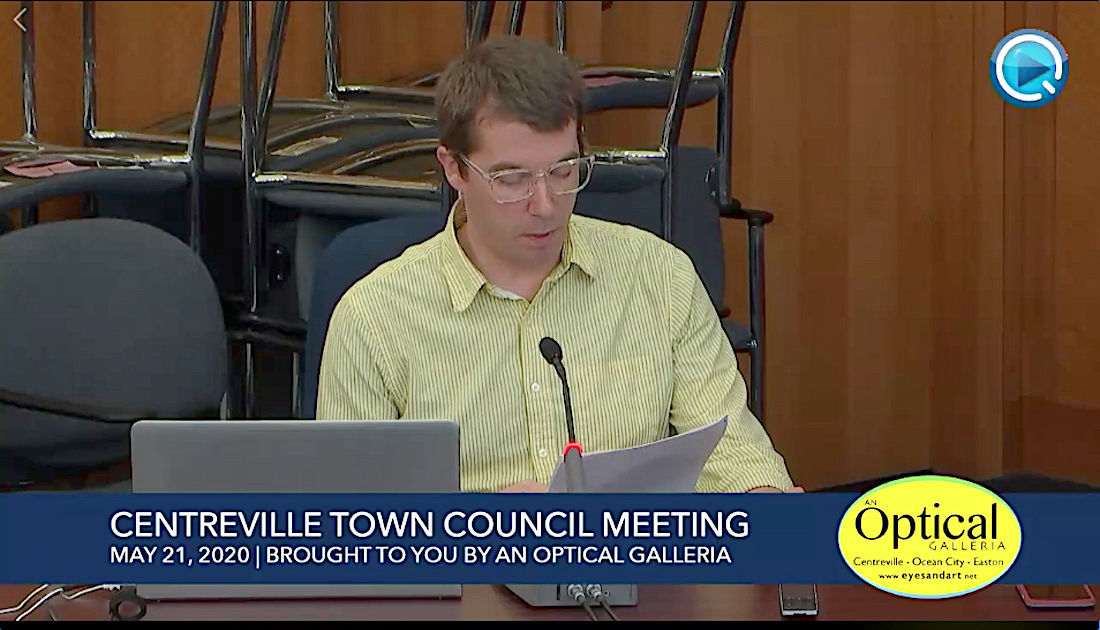 Bruce Grove of QACTV reads citizen comments during the Centreville Town Council meeting May 21. All were opposed to increased water and sewer rates. 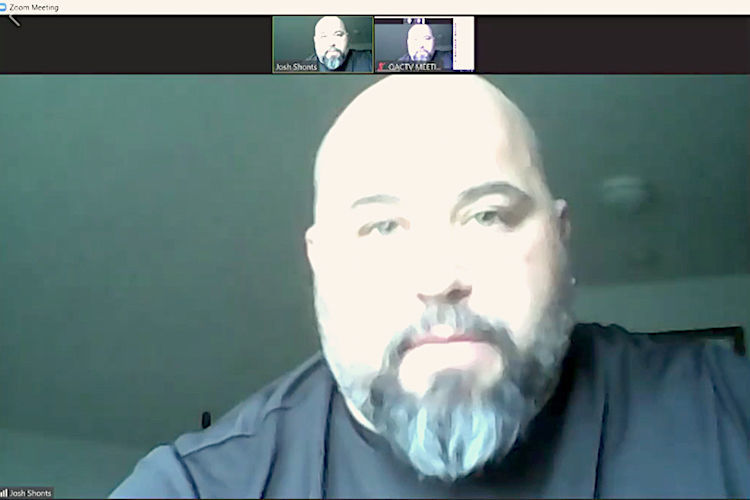 Centreville Town Councilman Josh Shonts, attending via Zoom, lends his support to Council President Jeff Morgan’s motion to reduce the amount of the increase in water and sewer rates.

Centreville Town Council President Jeff Morgan tells fellow council members during a pandemic is not the time to be raising rates by 40 percent as he pleads for one of them to join him to reduce the amount.

Bruce Grove of QACTV reads citizen comments during the Centreville Town Council meeting May 21. All were opposed to increased water and sewer rates.

Centreville Town Councilman Josh Shonts, attending via Zoom, lends his support to Council President Jeff Morgan’s motion to reduce the amount of the increase in water and sewer rates.

CENTREVILLE — Dozens of residents objected to the Centreville Town Council’s proposed water and sewer rate increases during its budget hearing Thursday, May 21. There were three hearings — one on the budget, one on the constant yield rate and one on the water and sewer rates. Comments on the three were intermingled. No one spoke in favor.

People said they were “horrified,” “appalled” and “dismayed” by the proposed 40 percent utility rate increases. Words used to describe the rates included unfair, ridiculous, unconscionable, backbreaking, ill-willed, disheartening, unacceptable, outrageous, unreasonable and drastic. Numerous comments linked the utility raises to the Liberty and Commerce streets water and sewer infrastructure project, accusing the town of a lack of insight and planning and of mismanaging funds.

Many mentioned citizens are already struggling during the coronavirus pandemic, having been furloughed from jobs or their businesses forced to close, others having lost their retirement savings in the stock market.

Such a dramatic raise especially during the COVID-19 crisis would create a financial hardship for families, especially those with fixed or low incomes; consider the climate; the timing couldn’t be worse; this is not the year to do this, council members were told. Some residents suggested the increased rates might force them to sell their houses and move.

The council had added funding to allow for live comments via Zoom, but the majority comments were submitted via email and were read aloud by Bruce Grove of QACTV. Only a couple citizens elected to speak on camera, although many joined in the meeting via Zoom, Grove noted.

While they weren’t proposing cutting the property tax rate to the constant yield rate, no properties have been reassessed since last year, so no one who paid property taxes last year will be paying any more, McCluskey said.

Shonts also responded to several comments that accused them of hiking rates to pay for raises. He said the Council had eliminated raises for town employees and cut a lot from the budget.

McCluskey gave a PowerPoint presentation on the water and sewer rates.

“Expenses far exceed revenues for general operations of the utility system,” he said. The costs of the system should be paid for by the users, but between 2003 and 2013, utility rates in Centreville were unchanged. The system was operating at a deficit. The Council commissioned a study in 2013 and was advised to increase rates by 70 percent. Instead the Council increased rates by a smaller amount and continued to operate in the red.

“The utility cannot survive over the long term if rates are not increased,” McCluskey said, adding, “Maintenance and planned capital improvement must occur regularly.”

He estimated the proposed increases would amount to about 91 cents per day for the average user.

Shonts thanked him for the information. “I hope people are getting a better understanding of why decisions are being made,” he said.

Council President Jeff Morgan said he had looked at the last five years and every year the system was running at a deficit — except for last year when a new apartment complex came online. Those allocation fees went to pay operating costs instead of maintenance, he said.

After the second reading of the proposed budget and water and sewer rates, Morgan appealed to his fellow council members.

“We’re getting flooded with emails and comments. A lot of people are having heartburn with the amount of the raise, and I understand that,” Morgan said.

Unfortunately, the rate has to be raised, Morgan said, but in light of the pandemic and other issues, he suggested changing the increase to 25 percent for fiscal 2021 and another 25 percent in fiscal 2022. He said he would appreciate it if one or both of the other council members would join him.

McCluskey said the 40 percent increase was just covering the operating costs and he couldn’t see it.

“We’re here for the people. If the people want to pay less now, OK,” Shonts said. “We can talk about paying less.”

He stressed that the problem was not going to go away.

“This is not something the town makes money on,” he said, adding they were just trying to cover operating costs.

He agreed with suggestions the town could sell property, but said that was only a short-term fix.

“Long-term strategy has to be the goal …. Tough decisions have to be made,” he said, adding, “The end game is to catch up to even.”

“This is what’s right for Centreville,” he said.

He said he would be the lone dissenter if necessary.

“Coronavirus – how do you plan for that? You don’t, you can’t,” Shonts said. “Times are tough; I don’t know that it’s fair to saddle people with more right now.”

He said he was willing to join with Morgan on the 25 and 25 percent increases.

Shonts seconded the motion, and it passed 2-1 with McCluskey opposing.

All three ordinances will remain open for comment until the next Council meeting on June 11. Written comments may be submitted to Town of Centreville, 101 Lawyer’s Row, Centreville, MD 21617.