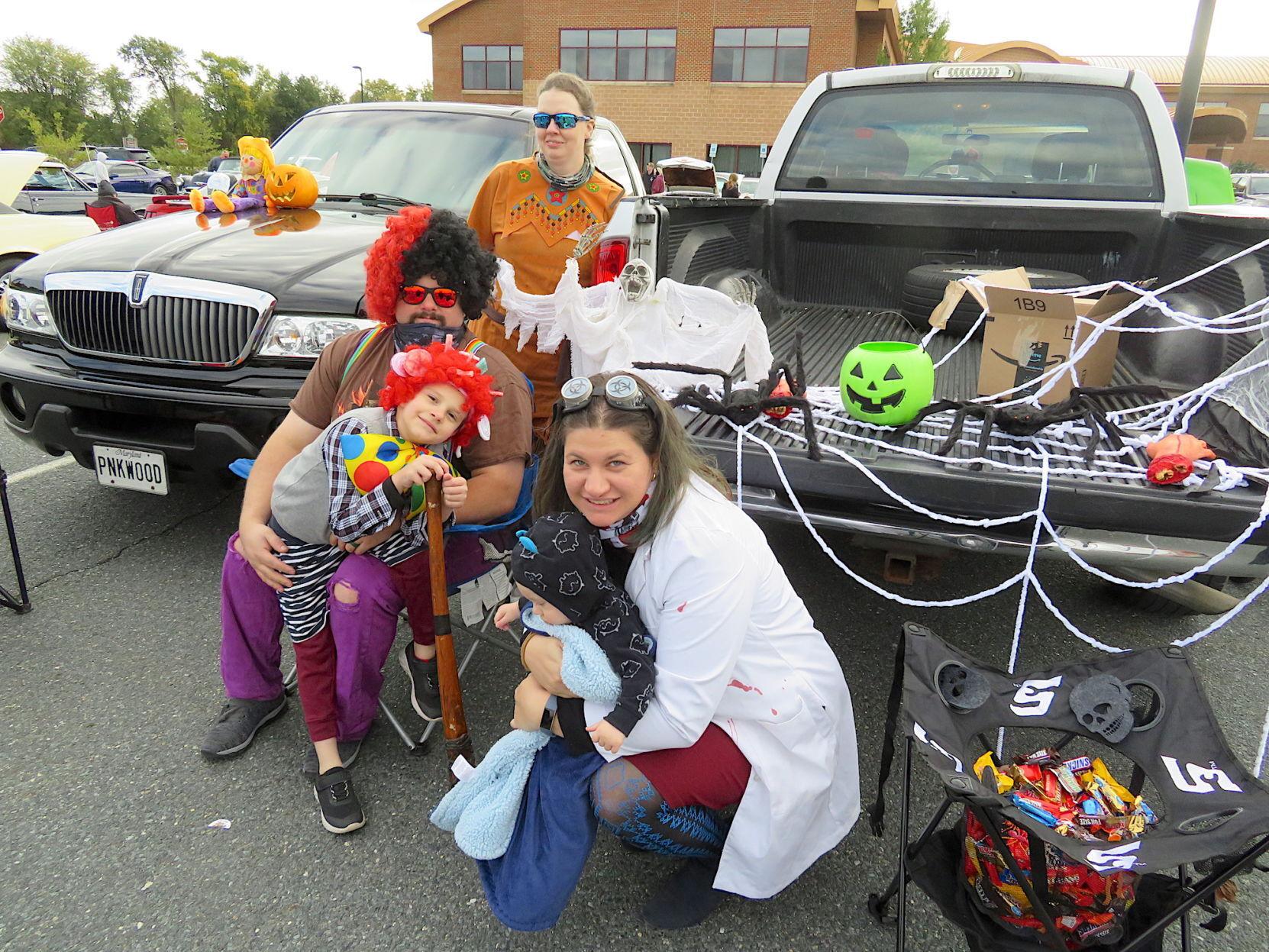 Pictured with one of Church Hill Volunteer Fire Company’s first fire trucks, a 1931 Studebaker built fire engine, from the left; Past CHVFC Fire Chief Francis D. Jester, and CHVFC Fire Apparatus Driver Bill Legg, Sunday afternoon, November 8, just prior to the new firehouse dedication. The old fire truck was restored by the fire company membership 5-years ago. Both men are Life Members at the fire company.

Longtime CHVFC member Charlie Rhodes spoke briefly at the dedication of the new firehouse, Sunday afternoon, November 8, saying, The fire company continues to be a pillar in the community, and an example of everyone working together for the common good.”

Pictured, the long line of VIPs who held the symbolic fire hose as it was uncoupled for the dedication of the newly constructed Church Hill Volunteer Fire Company firehouse, Sunday afternoon, November, 8. Among the dignitaries, member of the fire company, ladies auxiliary, county and town commissioners.

Left; CHVFC Past Fire Chief Francis D. Jester presents CHVFC Life Member Bill Legg with a ceremonial brick from the past Church Hill firehouse that was torn down two-years ago to make space for the new firehouse built in the same location.

CHURCH HILL — Members of the Church Hill Volunteer Fire Company dedicated their newly constructed firehouse, financed by Queenstown Bank on Sunday, Nov. 8. CHVFC has existed for 125-years, beginning in 1895, with a hand-pulled fire apparatus parked at small barn along Sterling Lane. From there, a few years later, the first firehouse was located directly across the street from Church Hill Theatre in historic downtown area.

Longtime CHVFC member Charlie Rhodes spoke briefly during the dedication ceremony, saying, “This fire company continues to be a pillar in the community, an example of everyone working together.”

CHVFC Vice President Brian Collins served as Master of Ceremonies, welcoming all who attended the dedication and introducing guests; which included three county commissioners, Jim Moran, Jack Wilson and Chris Corchiarino. Wilson spoke for the commissioners, thanking the fire company membership for the service to the community, and saving the county millions of dollars in taxes by being a all volunteer organization.

Past CHVFC Fire Chief Francis D. Jester provided a brief history of the fire company. While doing so, he recognized Past Chief and Life Member William B. Coppage for his generous donation to the project of building the new firehouse. To applause, Jester said, “A tip of the helmet to you!”

“The most recent firehouse that was torn down in April, 2019, was built and opened November 10, 1950,” said Jester. “It served the community for nearly 70-years. It was decided to demolish the old station and construct a new larger six bay station on the same property.”

Jester added, “From sponsoring the local Boy Scout Troop 195, hosting the Lion’s Club meetings, Monday night Bingo, the Ladies Auxiliary Pancake Suppers and chicken salad and bake sales, and the teen dances featuring Rick Leonard’s Band, “Stonehenge”, the firehouse has been the center of the community.”

Regional Builders of Seaford, DE, was hired as the general contractor for the project. Regional Builders CEO Bob Boyd is no stranger to Church Hill, as he and Jester went to Church Hill Elementary, Centreville High School and both joined CHVFC along with Phil and Dick Hurlock in August 1963. Boyd’s father was manager of the then Church Hill Lumber Company and served as president for the fire company.

As a back-drop for the ceremony, one of the first fire trucks every purchased by CHVFC, a 1931 Studebaker fire engine, completely restored by members of the fire company five-years ago, was on display.

Instead of a ribbon cutting, the fire company held a fire hose uncoupling in front of the new firehouse with many members holding the hose. Life Members of CHVFC were presented with single bricks with their individual name engraved on it.

Josh Davidson owns Anchors and Oars, a nautical recycling shop in Grasonville. He cleans material off of abandoned sailboats and sells them both in his shop and on Facebook.

Josh Davidson was a Russian linguist in the Air Force. He feels strongly that veteran suicides should be talked about on Veterans Day.

Josh Davidson’s shop has a distinctive appeal to both men and women. He enjoys the idea that anyone can come to his shop Anchors and Oars in Grasonville and find anything from a weathered cleat to a cute purse.

Anchors and Oars owner Josh Davidson uses his truck to get abandoned sail boats that he strips clean of all the “good stuff” until there is only the fiber glass hull left.

GRASONVILLE — One man’s junk is another man’s treasure. While he deals in memories, his military past stays with him, too, and Veterans Day holds a special place for Josh Davidson, a veteran who served in the U.S. Air Force for four years. A sort of a nautical alchemist, he takes deserted boats and strips them down to their fiberglass husks. He mines out anything of value — either artistic or functional — and sells them.

His shop, Anchors and Oars in Grasonville, reads like the “Sanford and Son” television show from the 1970s, but there’s an underlying order based on his military training.

“I was a Russian linguist for the Air Force. I was behind a desk listening to audio. At the time I was fluent,” he said.

“I served in California, Texas and Maryland. [I was] just glad I was able to serve this great country,” he said.

Veterans Day feels special to Davidson, who shared, his grandfather was in World War II and his uncle in Vietnam — both of them in the Army. “I think I have a special place in my heart for anyone who joins the military,” he said.

Davidson started small in the antique business. There was an antiques store in Stevensville that he walked into, the owner was taking vendors and told him he could rent a little space. Before that he had only sold some things on eBay.

“I have always kind of bought and sold stuff. I was yard-saleing and stuff and I liked it. Almost everything I do now is on Facebook and here [at the store in Grasonville], of course. I drove by a 4,000 square foot space for super cheap, and that is how I started my own antique store,” he said.

People come from all over to buy his stuff. Tennessee, Connecticut, Rhode Island and Wisconsin. They come in to see what else he’s got.

“This one guy drove from Florida because I had a certain boat. He had the boat, too, but it had been ruined — like messed up by a hurricane. So he says, ‘Can I come up there and take stuff off of your boat?’ He went back home with his car absolutely packed, like on top of his car,” Davidson said.

He prefers to call what he does recycling rather than salvaging. He takes all the metal. He scraps some of it and puts the salable items in his store. On some level, he is like a nautical curator.

He offers owners of derelict boats a cheap solution.

On the topic of Veterans Day, Davidson said, “I think it is special for someone to volunteer and go into the military and serve and be ready,” he said. “But there’s just so many people that I know who were overseas fighting and saw some tough stuff. So I always honor other people. You know I am thankful that I got in and out with no trauma. I know I lot of people who still have issues.”

“The biggest thing that bothers me is veterans suicide. That is something I always like to point out on Veterans Day. I like to bring it to the forefront because there are people who get out of the military who are just kind of lost,” he said.

Davidson noted the challenges veterans can face after their service.

“It is something like every two minutes a veteran commits suicide. People think coming out of the military is really strong, but it can be really, really lonely. So if you don’t have a family or you do have a family, they don’t understand what you went through. I think it is really important to talk about it,” he said.

“I knew a woman whose husband jumped off the Bay Bridge — twice,” Davidson said.

Davidson was a founding board member of a veterans organization called The Veterans Art Project.

“We did a lot of work all over the place with artists trying to give outlets for veterans who happen to also be artists. Give them ideas, something that they can do,” he said.

As a businessman, he was affected by COVID-19 like everyone else.

“We were closed for two and half months. I am just open Friday, Saturday and Sunday. I wasn’t sure if anyone would come out. And it actually turned out to be the best thing for me, because when we were open Wednesday through Sunday, I only had two days to really work here. Once we got back up and running, sales have been surprisingly good,” he said.

“We are probably doing as well as we did last year even being open three days as opposed to five,” he said. “I average three or four boats a week. Unless it is a big one like this one (36 feet). I have a huge list of things that people want already. So when I get things like they want — a steering wheel that size or people who want a railing for that particular boat — I pull this stuff and already know where it is going,” he said.

There is also yin to all this yang. He sends old sails to Sea Bags, a company in Maine that transforms them into hand bags and pillows. He sells candles, jewelry and gift items as well.

“This is a great place for a husband and a wife to come, because she could send him in there, and she could go in here and shop. They’re like ‘Holy cow.’ You can buy candles, you can buy jewelry and clothes and gifts. You can come here and shop for a housewarming gift or a wedding gift,” Davidson said.

Thinking about how COVID has affected his surroundings, he is sad for all the stores that have closed. But he is grateful he is still up and running.

“I think when everyone was home for three months, they really started looking around their house,” he said. “They got tired of that one wall that wasn’t finished. I’ve had so many people come in here and be like, ‘I am buying everything you have.’ Also they were home and bored and they start working on their boat that has been sitting in their driveway for ten years. And so they need parts for the boat.”

Davidson keeps busy. He’s a photographer, filmmaker and editor, too. He was hit by the coronavirus on this front also, because he does video and photography work for the Annapolis Boat Show that was canceled.

In 45 minutes three customers came in looking for specific nautical items. He has an encyclopedic memory of what he has in stock down to the last cleat. He’s like someone who runs a great hardware store.