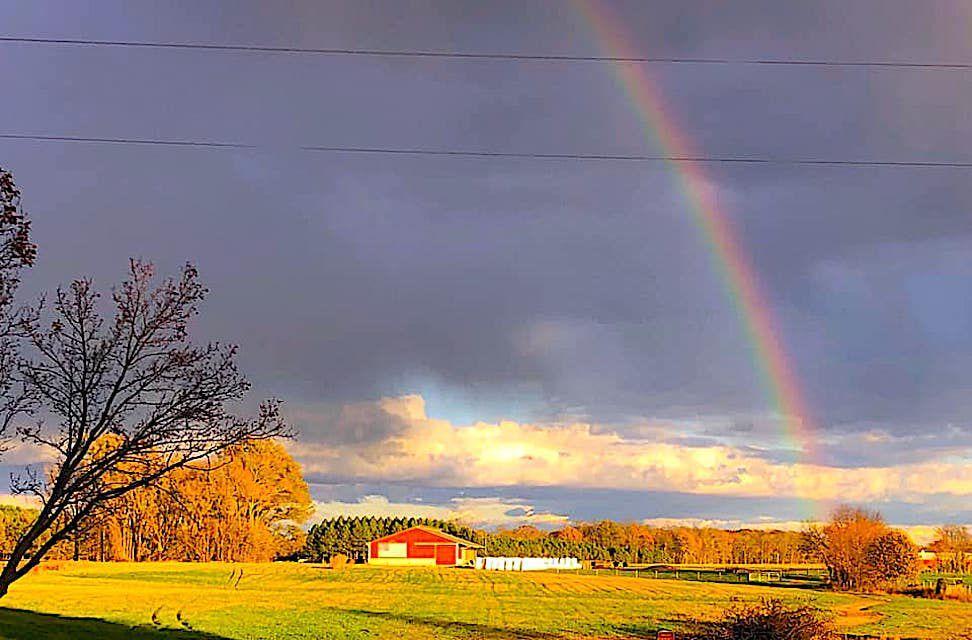 A passing rain squall Tuesday evening between Hillsboro and Starr leaves a bright rainbow across the sky. Unpredictable weather changes, including high winds, have been the norm across the region for the last several days.

CHESTER — Boy Scout Troop 1829 in Chester held a virtual Eagle Court of Honor recognizing Timothy Weibell, 17, of Centreville, for his achievement of this highest rank.

The ceremony was held in October from his parents home in Centreville, as friends and family members from as far away as Utah and Nevada watched the ceremony.

Tim, as he is known by his friends, watched as Scoutmaster Marc Robinson shared pictures of Tim’s progress through scouting over the years, including many pictures of campouts and high adventure activities. Robinson was followed by Tim’s grandfather, Chris Killian, also of Centreville, sharing stories and showing his own merit badges sash when he was a Scout and earned his Eagle rank. Killian shared the Weibell family has several Eagle scouts in their lineage — Tim’s father, Ben Weibell, and his grandfather Mark Weibell, who resides in Utah, both earned their Eagle rank’s as young men.

Tim joined the rare number of young men who have earned their Eagle, as nationally, only 4% of all young men who join Boy Scouts of America, actually earn the rank, distinguishing themselves in the most positive manner from their peers. The Eagle rank is held in such esteem that all branches of the U.S. military automatically award graduates from respective boot camps a higher pay grade upon entering the military. Many businesses actively look to hire Eagle Scouts.

Among the requirements to earn the Eagle rank, a Scout must progress through other ranks before being eligible to attempt to earn it. The Scout must complete an Eagle Scout Service Project, which must be previously approved by the local Boy Scout Council to be worthy before it can be started. Tim’s Eagle Project was very unique. He chose to electronically map all 3,500 graves at the Chesterfield Cemetery in Centreville. In doing this, he actually photographed every headstone, and visually listed it in a world-wide collection of cemeteries from around the world. This allows people who are doing genealogy work to find where their relatives are buried, if they didn’t know. Chesterfield Cemetery was founded in 1846.

Tim said, “My favorite merit badge was Motor boating. I earned it scout camp. Personal Fitness merit badge was the most challenging for me. The badge requires you make and follow a 12-week fitness plan and sticking to any such plan for that length of time is difficult. It took me a couple tries to get it done.”

Among Tim’s most memorable scouting experiences was riding a bicycle along the C & O Canal over 4-days, covering 185 miles. He found it both challenging and fascinating. He said he loved the natural beauty of riding the trail and seeing history along the way.

As part of the Eagle Court of Honor, Tim presented Robinson with an adult mentor’s pin for his leadership in helping and encouraging Tim to complete the Eagle requirements.

Tim graduated from Queen Anne’s County High School with the Class of 2020 where he was a member of the school’s National Honor Society. He also graduated from The Church of Jesus Christ of Latter-day Saints Early Morning Seminary Program, attending seminary classes before school each day for 4-years, reading and discussing scriptures in detail.

Tim will leave Queen Anne’s soon to serve as a full-time missionary for the next two years. He has been assigned to serve in the Roseville, CA, Spanish speaking mission, near Sacramento.

Native Kent Island resident Clara Bryan Davidson reacts as her great-grandson, Eli Jarboe, 7, of Centreville, presents her a bouquet of red roses for her 100th birthday, Thursday, Nov. 12, outside her home in historic downtown Stevensville. Eli wears a face mask, as was everyone else standing in her front yard.

Clara Bryan Davidson celebrates her 100th birthday, from her porch in historic downtown Stevensville, waving to family members and friends gathered in her front yard, as Queen Anne’s County Commissioners Phil Dumenil reads a proclamation naming the date in her honor.

Members of Clara Bryan Davidson’s family and friends are stand in the front yard of her home on Thursday, November 11, as part of the celebration of her 100th birthday.

STEVENSVILLE — Celebrating her 100th birthday, Kent Island native Clara Bryan Davidson received a special proclamation from Commissioner Phil Dumenil dedicating November 12, 2020, as Clara Davidson Day in Queen Anne’s County. Members of her family, friends and neighbors gathered in her front yard to sing “Happy Birthday” to her as she sat in chair on her front porch.

Clara Rebecca Bryan was born to Norman and Cora Bryan in 1920. Her father was a schooner captain on the Chesapeake Bay, transporting freight up and down the bay and in local bay tributaries.

Clara was the second of four siblings, and today, is the only surviving child of the four.

The family lived in Shipping Creek, until her parents moved to the town of Stevensville, so the girls could walk to and attend school. Clara attended elementary school in the old school house located in Stevensville (which is still standing near Duty’s Service Center). She graduated Valedictorian in 1937 from Stevensville High School. Today’s Stevensville Middle occupies the site of the high school.

After high school, Clara attended Baltimore College of Commerce, which later became the University of Baltimore, where she learned to do what women did in those days, becoming a secretary. She went on to work at the orange soda factory located where Friel’s Lumber Company is today in Queenstown. She also worked at Stevensville High School as the principal’s secretary.

She met John Fountain Davidson, a local boy and they married in 1942. The lived on the family farm that was located near where Love Point Park is located today. The Davidson’s later moved to downtown Stevensville where Clara still resides with her grand-daughter and great grand-daughter today. Her husband, John passed in 2004 after sharing a very full life with Clara.

Clara has never had a driver’s license, but she has been known to have driven a car a few times in her life, just around the community, but not in recent years! She also never learned to swim, even though she has boated most of her life.

Asked what she attributes to her longevity of life, she replied, “Just take life as it comes, take it easy, and don’t get too upset about things. Just keep going.” 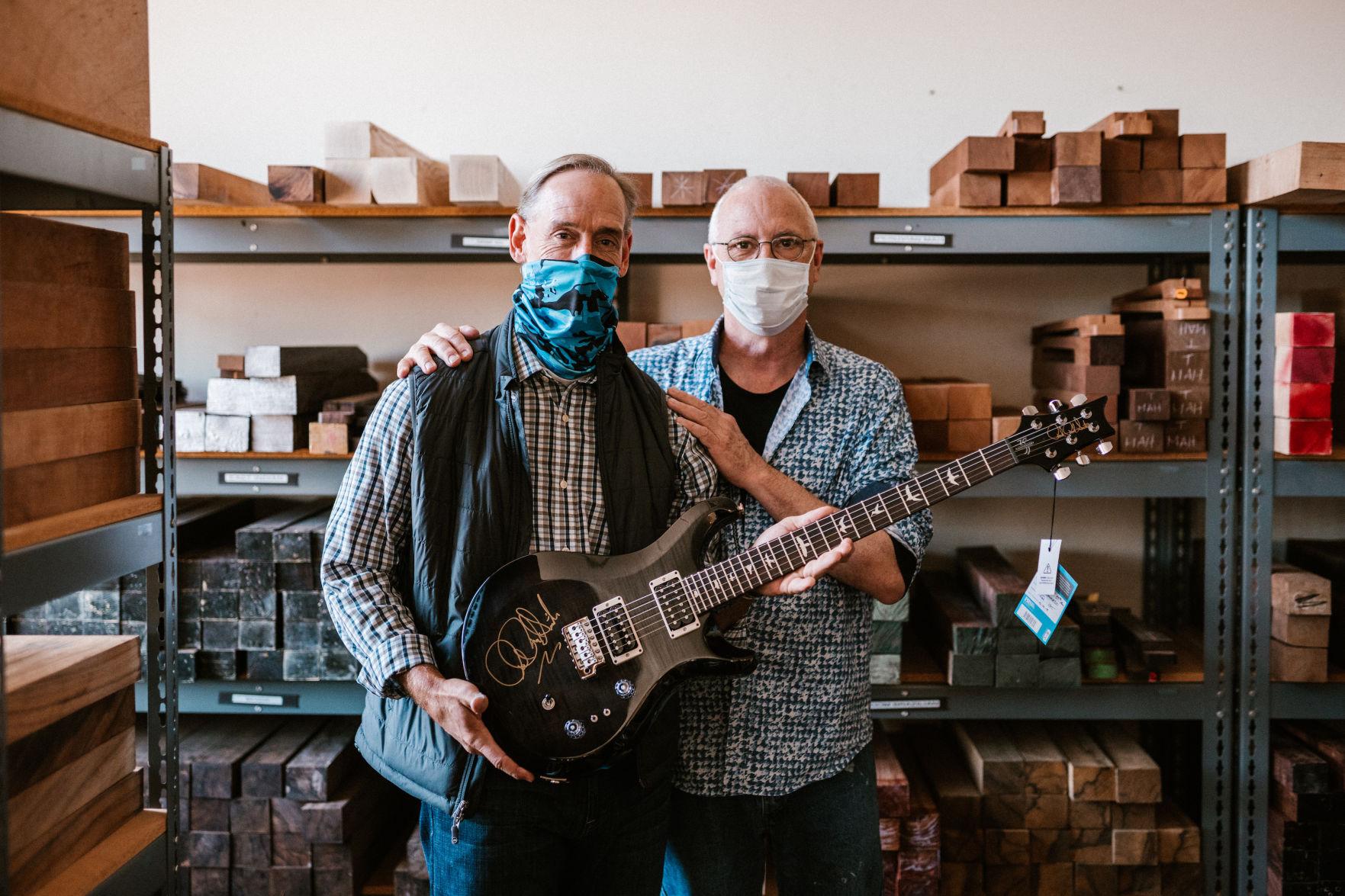