With his wife Melissa holding the Bible, Ron Dixon is sworn in as Chestertown’s police chief Wednesday, Sept. 29. Administering the oath is Mayor David Foster.

CHESTERTOWN — There is a new police chief in town.

Ron Dixon, a lawman with nearly three decades of experience on the Mid-Shore, was sworn in yesterday afternoon by Chestertown Mayor David Foster.

His hiring was announced in a news release Monday.

Dixon retired in December from the Caroline County Sheriff’s Office with the rank of lieutenant.

He succeeds Lt. John Dolgos, whose last day is today.

Dolgos has been the acting chief since September 2019.

His entire 30-year career in law enforcement has been with the Chestertown Police Department, what is believed to be the longest tenure of any officer with the CPD.

He must retire due to the state pension system.

Dixon has 27 years of experience in Queen Anne’s and Caroline counties, working initially as a patrol deputy and finishing his career in supervisory, administrative and command positions.

He has a bachelor’s degree in criminal justice from the University of Maryland Global Campus.

Dixon grew up in Bridgetown, and is a 1988 graduate of North Caroline High School.

Chestertown began advertising for a new chief in early spring with an application deadline of May 10.

In a closed-door special meeting Sept. 13, the mayor and council met with the finalists separately.

Then, on their own, they ranked the finalists.

Ingersoll announced at the Sept. 20 council meeting that there was enough of an overlap in the rankings that a clear front-runner had emerged.

Dixon was hired Sept. 23, according to the news release.

To facilitate the transition, Dixon and Dolgos have been working together this week.

After 45 days of separating from the CPD, Dolgos could return in a new position. He has said that he might be interested in coming back part time.

Today is John Dolgos Day in Chestertown, according to a proclamation that Mayor Foster issued at the Sept. 20 council meeting. At the same time, Dolgos was given a key to the city. 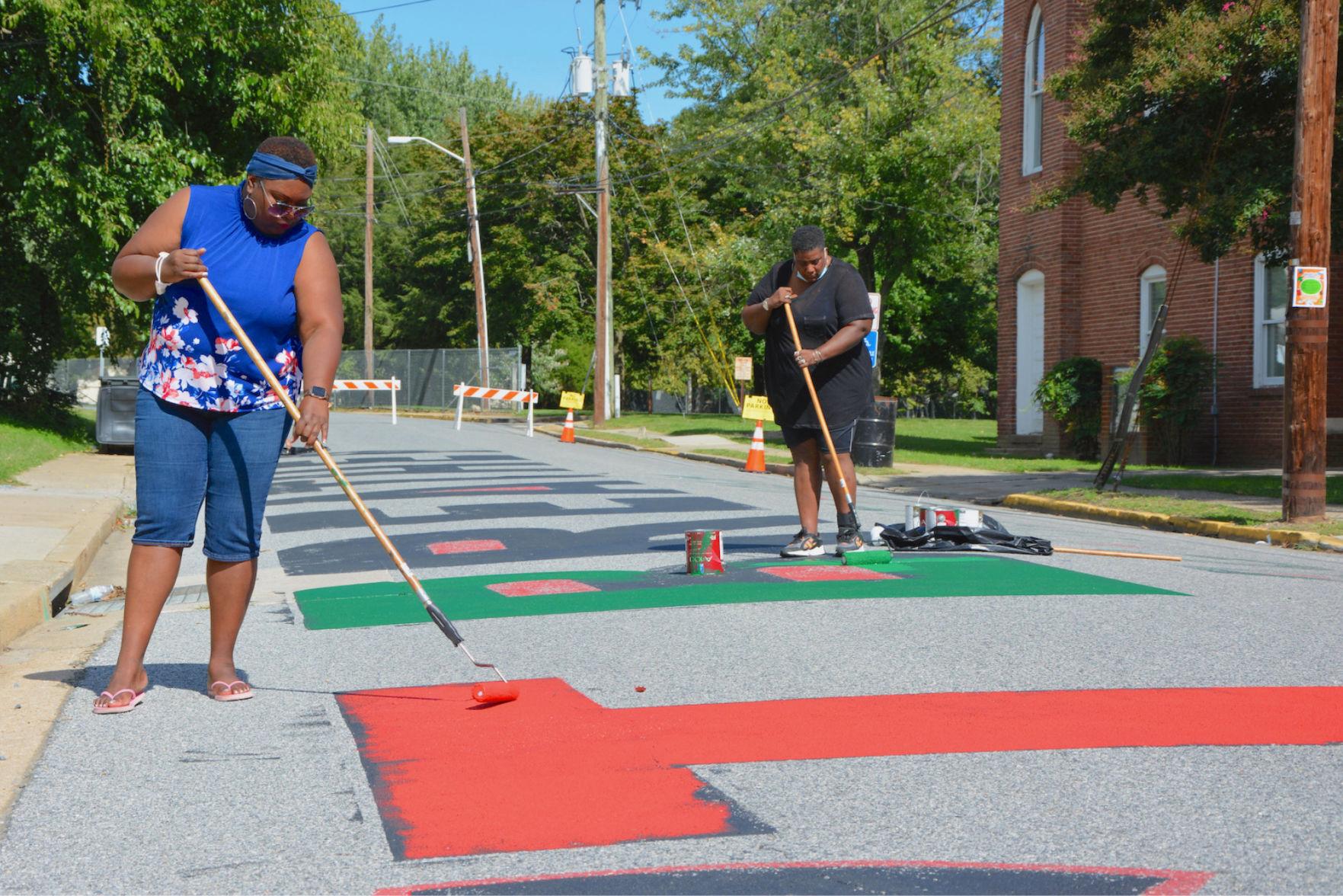 CHESTERTOWN — The Kent County Chamber of Commerce presented its Community Excellence Awards on Thursday, Sept. 16 to four businesses and nonprofits and one individual for their outstanding contributions during the past year through service and leadership.

The award winners are The Kitchen at the Imperial, Main Street Chestertown, Minary’s Dream Alliance and Rebuilding Together Kent County. Dr. Gerard S. “Jerry” O’Connor was named Person of the Year.

“The Chamber is extremely pleased to recognize these four businesses and nonprofits and Dr. O’Connor. Their commitment to the community makes Kent County the special place that it is,” said Bryan Matthews, president, in a news release.

The Kitchen at the Imperial was recognized for its many outstanding contributions to the community, especially for feeding University of Maryland Shore Medical Center at Chestertown staff during the onset of the COVID-19 pandemic.

When the pandemic hit and many were forced to work from home or seek unemployment benefits, the hospital staff diligently reported to work. With few customers to serve, The Kitchen owner and chef Steve Quigg reached out to the hospital and offered to cook and deliver meals for the night shift.

“This is just one example of how The Kitchen reinforced the principle it abides by, ‘being a community restaurant,’” the news release states.

Main Street Chestertown was recognized for launching four initiatives aimed directly at supporting shops, merchants and restaurants impacted by the pandemic and resulting distribution to customers.

Minary’s Dream Alliance was recognized for several programs that brought joy and much needed support to several populations in Kent County. The programs ran the gamut of an Easter egg hunt during COVID-19 to preparing meals for first responders, and their impact was far reaching.

Minary’s Dream Alliance’s most notable contribution was rallying an entire community to deliver 200 bags of groceries each week to homebound seniors during the height of the pandemic.

Rebuilding Together Kent County touched the lives of many people here. The nonprofit provides critical home repairs to those in need, including replacing roofs and installing handicap accessible ramps — allowing people to remain in their homes.

Because the equity in one’s home is often the only source of wealth for many, the work Rebuilding Together Kent County does has the added benefit of preserving housing equity in our community.

Dr. Gerard “Jerry” O’Connor was recognized for his many contributions to the community over the past 38 years. He has dedicated his medical career to serving the surgical needs of residents in Kent County and surrounding areas.

In addition to being a medical professional, O’Connor has been an active member of several community organizations including the Lions Club.

He helped to launch a grassroots movement — Save Our Hospital — to preserve inpatient services at the hospital in Chestertown. This movement was instrumental in UM Shore Medical Center at Chestertown being designated a Maryland Rural Hospital.

With more than 300 member businesses, nonprofits and individuals, the Chamber is Kent County’s premier business-to-business facilitator. Through its many unique programs, events and advocacy, the Chamber provides a platform for leaders from the private, public and nonprofit sectors to engage with each other to grow their respective organizations for the ultimate benefit of Kent County and its residents, according to a news release.

For more information, call 410-810-2968, visit www.kentchamber.org or find the chamber on Facebook at facebook.com/kentcounty chamberofcommerce.

CHESTERTOWN — States like Maryland with Good Samaritan laws are linked with lower rates of overdose deaths from opioids, according to a recent study from the U.S. Government Accountability Office.

Almost 1 million Americans have died of drug overdoses since 1999, with record-breaking deaths last year at more than 93,000. In Maryland opioid overdoses killed 2,499 people in 2020 — the most ever recorded.

So far this year, Kent County has had nine suspected overdose deaths. And while use of the life-saving opioid overdose antidote Narcan is becoming more common, Maryland’s Good Samaritan Law continues to encourage people to get help when someone overdoses.

Maryland’s Good Samaritan Law became effective on Oct. 1, 2015 and protects people who help with an overdose from arrest and prosecution for certain crimes.

That protection only applies to someone who calls 911 and stays until help arrives. The law is intended to help save lives by encouraging bystanders to get help and stay until that help arrives.

“One of the top priorities is the preservation of life,” said Capt. Dennis Hickman with the Kent County Sheriff’s Office. “We want our citizens to immediately call for help in the event of a drug or alcohol health emergency. In many cases, especially when someone is suffering from an opiate overdose, only immediate medical intervention can reverse the effects.”

Kent County Health Officer William Webb stressed the immediacy of getting help when a person overdoses. He said opioids can kill faster than a venomous snake bite. Street drugs, he added, are unpredictable and dangerous.

DiGregory said overall he is in favor of the law, but sometimes it creates a missed opportunity to get someone help through the justice system. Offering the PAST (post-adjudication supervision and treatment) program helps provide assistance for substance use disorder while avoiding a conviction, for example.

“In the short term the law certainly can save a life, but the individual’s behavior generally doesn’t change, which can lead to another overdose where there is no one around to make a call to the police,” DiGregory said.

Forty-seven states plus Washington, D.C. have enacted both Good Samaritan and Naloxone (Narcan) Access laws. The laws vary from state to state.

In Maryland, when someone calls 911 during an overdose — and does not leave until help arrives — that person’s parole or probation status isn’t affected. In addition, the person helping won’t be arrested for any of the following: possessing or administering drugs or paraphernalia; providing alcohol to minors; or underage possession of alcohol.

The law does not apply to drug felonies or other crimes not listed above and doesn’t protect someone who leaves a medical emergency. The law also does not prevent law enforcement from conducting an investigation and gathering evidence.

Specifically, the law protects a person from six misdemeanor crimes:

§ 10-117: Furnishing for or allowing underage consumption of alcohol

Learning about this law, and talking about it with your children, could help prevent unnecessary deaths. The law applies to all drugs — including alcohol, which remains the most abused substance among our youth.

“Nearly everyone has in some way been affected by this epidemic,” Hickman said. “Making the call when someone needs help may save a life. Make the call.”

Kent Goes Purple is a substance abuse awareness and prevention initiative from Kent County Sheriff’s Office and Chestertown Rotary Club, that empowers local youths and the community to “Go Purple” as a sign of taking a stand against substance abuse.

Kent Goes Purple focuses on preventing substance use in our youth, for which there are many different proven, evidence-based strategies.

Get more information about Kent Goes Purple at www.KentGoesPurple.org and on Facebook @kent goespurple.

Click and hold your mouse button on the page to select the area you wish to save or print. You can click and drag the clipping box to move it or click and drag in the bottom right corner to resize it. When you're happy with your selection, click the checkmark icon next to the clipping area to continue.