Decked out in stars and stripes for the 2019 Fourth of July celebration are Rock Hall natives Anna Ashley, left, and Helen Brilz Fisher. Rock Hall’s annual parade returns this year and the fire company will hold its fireworks display on Saturday, July 3.

CHESTERTOWN — Many Fourth of July celebrations and fireworks displays are ready to return this year, though some are a little different than in the past.

There will be several events and displays in Kent County to celebrate Independence Day.

The Town of Rock Hall will be hosting its annual parade on Main Street on Saturday, July 3 at 10 a.m.

American Legion Post #228 in Rock Hall will be hosting a pit beef and turkey drive-thru on July 3 starting at 10:30 a.m. The drive thru will continue until food runs out.

For fireworks, the Rock Hall Volunteer Fire Company will hold its annual display over the harbor at 9:15 p.m. July 3.

There are also events surrounding the Kent County area.

On Friday, July 2 the Town of Centreville will have its family fun event and fireworks at 6 p.m. in the Queen Anne’s County High School bus loop. The event is free and will include a slide, obstacle course, batting cage, and petting zoo. Food vendors will also be present.

Fireworks will begin at 9:15 p.m. in the field across from the high school.

Queen Anne’s County will also be hosting its annual fireworks and family fun celebration at the Chesapeake Heritage and Visitors Center on July 4 at 6 p.m. Fireworks will start at 9:15 p.m.

There will be activities for children, including bounce houses and face painting. Food vendors will be present and attendees are allowed to bring their own food and drinks.

Farther south in Talbot County, the Chesapeake Bay Maritime Museum will be partnering with the St. Michaels Volunteer Fire Company to host a fireworks display on July 3. Fireworks will begin after dusk. Attendees can bring their own food and drinks.

Easton’s fireworks will he held at 9:30 p.m. on July 4. Attendees should arrive at the field at the corner of Marlboro Road and St. Michaels Road no earlier than 8:30 p.m. Concessions will not be available. Attendees can bring their own food and drinks.

Across the state line, Middletown, Del. will host a fireworks display July 4 at Silver Lake Park. Silver Lake Park will be closed and attendees should watch the display “from their homes, vehicles or safely-distanced areas,” according to the town’s website.

The Smyrna-Clayton fireworks display will launch on July 4 from James T. Vaughn Se. Little League Park. The band Party Fowl will perform before the fireworks.

Parking will be available at Smyrna High School and Smyrna Middle School. Food trucks will be present at the high school. 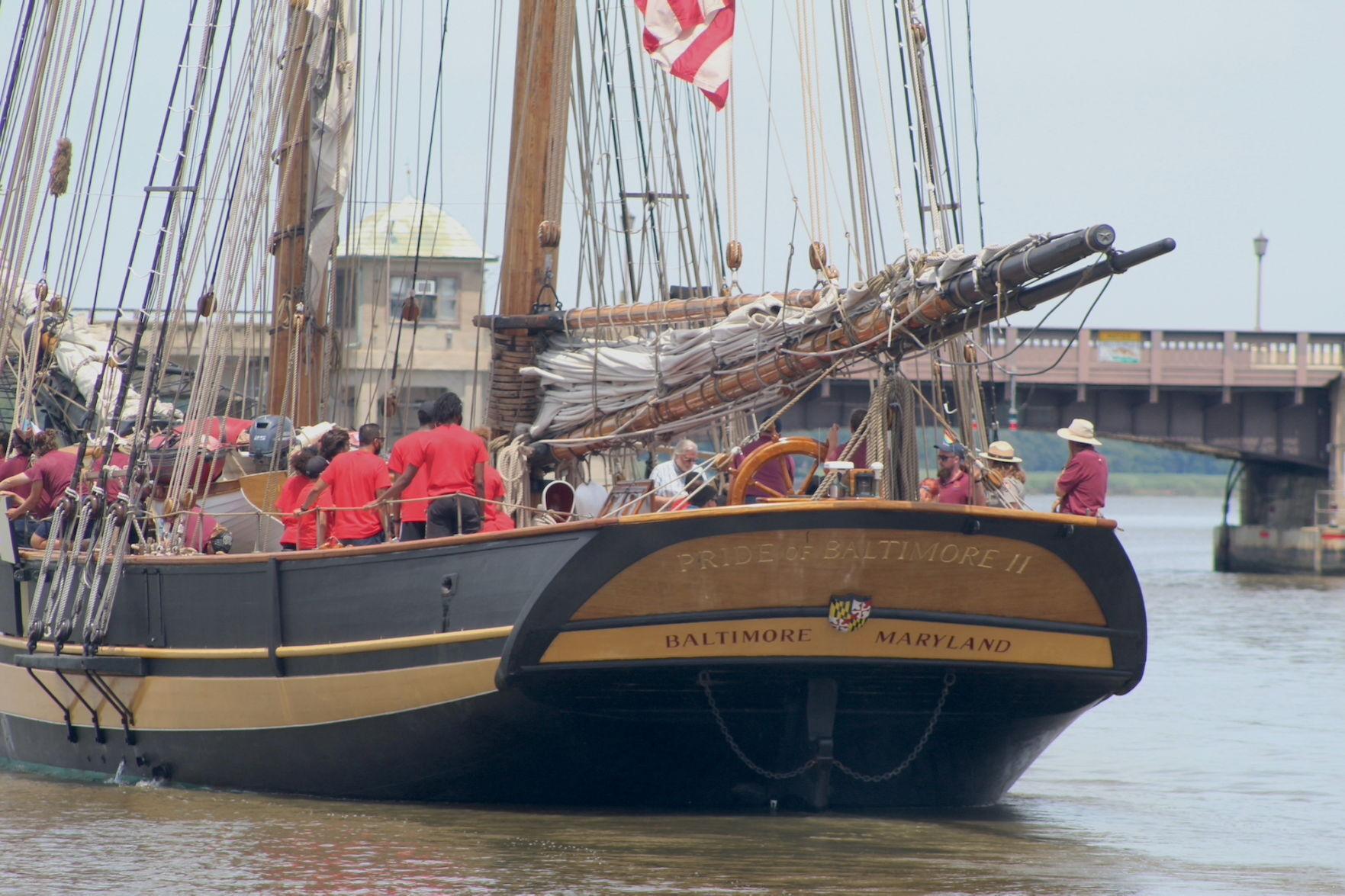 CHESTERTOWN — Students with the Horizons of Kent and Queen Anne's program go for a cruise Friday, June 25 on Pride of Baltimore II. The tall ship spent the weekend at the Port of Chestertown Marina as ambassador of the Star-Spangled Banner National Historic Trail, with public sails, tours, talks and dockside displays.

Wayne Gilchrest speaks to Galena Elementary School students on a field trip to Turner’s Creek several years ago. Gilchrest has announced that he will be retiring as the director of the Sassafras Environmental Education Center this summer.

Wayne Gilchrest announced his retirement at a Kent County Board of Education meeting on Monday, June 14. He also donated 30 copies of “The Chesapeake: An Environmental Biography” to the school system. Pictured are top row, from left, board members Wendy Costa, Vice President Trish McGee, Nivek Johnson and Francoise Sullivan; bottom row, board President Joe Goetz, Gilchrest and Superintendent Karen Couch.

Wayne Gilchrest offers a lesson in how to paddle a canoe to middle school students during a field trip this spring.

KENNEDYVILLE — Wayne Gilchrest, a veteran turned teacher at Kent County High School turned congressman turned founder of the Sassafras Environmental Education Center, will turn into the former director of the center on Aug. 31, when he is set to retire.

Gilchrest announced his retirement at a Kent County Board of Education meeting on Monday, June 14.

Due to his retirement, Gilchrest said SEEC’s student programming will likely be dormant for fall 2021 while the program transitions toward new leadership.

“I think it’s time. It just feels natural,” Gilchrest said of his choice to retire in an interview Monday, June 28 at Turner’s Creek.

After graduating from high school, Gilchrest served in the U.S. Marine Corps from 1964–1968, earning the rank of sergeant. He received a Purple Heart, Bronze Star and Navy Commendation Medal for his service.

After his service in the Marine Corps, Gilchrest went to college before becoming a teacher. He taught ninth through 12th grade students at Kent County High School from 1979–1986 and 1989 to 1990. He taught civics, U.S. history, world history and contemporary issues.

Gilchrest founded SEEC in 2010 after reading “The Chesapeake: An Environmental Biography” by John Wennersten.

Gilchrest first encountered the book when he was a congressman and met with Wennersten to better understand it so he could write legislation with its insights.

In 2009, he began working on a K-12 sequential learning program. The goal was for students to have hands-on, outdoor learning experiences each year that aligned with what they were doing in the classroom under the theme of agroecology.

“Kids love it out here and we love to see them laugh and run and learn. Those are the three key ingredients,” Gilchrest said.

While students are the key ingredient for Gilchrest, SEEC would not be possible without the support of community organizations.

“It was pieced together essentially because I know people in the county, because I’ve lived here and I raised my kids here. I asked them for help,” Gilchrest said of how SEEC came together.

Aside from these partnerships, SEEC also has 50 volunteers, Gilchrest said, 12 of whom are very active.

“I’m ready to keep this program alive as a volunteer,” Gilchrest said.

While fall programming for students may be on hiatus, SEEC will continue to operate.

“It’ll be dormant in the fall for kids but not all this stuff that’s growing, we’ll still come out every day for that,” Gilchrest said.

SEEC currently operates two gardens, one with primarily heirloom vegetables and the other primarily greens.

Gilchrest said that vegetables from the gardens go to the Kent County Food Pantry or Minary’s Dream Alliance.

“We have enough greens to provide 50 families with greens,” Gilchrest said.

The seeds from their heirloom garden also will be donated to urban areas for sustainable gardening.

Other projects SEEC is undertaking include increasing pollinator habitats with bee boxes and planting more wild grasses. The center also maintains a series of composting bins.

Then there is SEEC’s fleet of canoes for education on the water.

“I could talk forever,” Gilchrest said of SEEC’s programming.

When looking back on his career, the moments Gilchrest talked about being most fulfilling were related to family, recalling when he was a congressman and visited Antarctica and his son just so happened to be in the same area, or when he was shot in Vietnam and remembered his older brother telling him to breathe slowly through his nose when they were kids.

“If you can, along the way, retain your self-respect, your integrity, your curiosity for knowledge, your ability to work hard and be an independent thinker ... you’ll be OK,” Gilchrest said. “And develop and retain friendships with people.”

ANNAPOLIS — The Eastern Shore saw a 16% increase in opioid overdose deaths during the first quarter compared to last year and the state is launching new efforts to curtail a concerning statewide rise in drug- and alcohol-related fatalities.

A new report from the Maryland Opioid Operational Command Center and state Department of Health found there were 58 deadly opioid overdoses on the Eastern Shore during the first quarter. That is eight more deaths than in Q1 2020, translating into a 16% rise.

Statewide, Maryland saw a 5.7% increase in overdose deaths involving drugs and alcohol in Q1 2021 compared to the same time frame a year ago and 6.3% jump in opioid-related fatalities, according to a report released Thursday, June 24.

There were 682 “unintentional intoxication deaths” from drugs and alcohol during the first quarter — up from 645 overdoes deaths in Q1 2020. Opioids, including the very potent and dangerous fentanyl, were involved in 89.7% of fatal overdoses during the first three months of 2021, according to state health agencies.

The shutdowns, social isolation and job losses stemming from the COVID-19 pandemic and its related government orders have contributed to a worrisome rise in overdoses in Maryland and nationally.

The increase in deadly overdoses is prompting a new effort from the state.

“Seeing an increase in overdoses and deaths in our state is alarming, but we are determined to recover from this, as well as other impacts of the pandemic,” Rutherford said in a prepared statement June 24.

On the Shore, Kent County is slated to receive $88,668 for peer recovery support services. Queen Anne’s County is receiving an approximately $95,200 allocation to provide transportation assistance, for data facilitation and needs assessments, for community awareness ad campaigns and for medication assisted treatment. Caroline, Talbot and Dorchester counties will each receive grants of more than $90,000.

The state also is organizing a series of local and regional town halls starting in August that will look at the overdose problem and potential solutions. Funding from the state efforts comes from revenue from opioid-related lawsuits and financial settlements with drug companies.

“As the opioid crisis evolves, so must our response. Our administration remains committed to putting the resources and support systems in place at every level to help those struggling with substance use disorders. The Maryland Stop Overdose Strategy is a new layer to our comprehensive statewide response, and we intend to do all we can to reduce opioid overdoses and deaths in our state,” Rutherford said.

Kent County had one opioid fatality during the quarter, the same as a year ago. There were five fatal opioid-related deaths during Q1 2021 in Talbot County, 23 in Cecil County, 12 in Wicomico and seven in Queen Anne’s. Dorchester, Caroline and Worcester counties saw declines in opioid overdose deaths during the first quarter.