Anna Brooks sits with celebratory balloons and signs that her church community made for her 103rd birthday, which she celebrated on Jan. 22.

Anna Brooks loves to color. One of her creations was made into a wreath and sold for $83. She said she could not believe it.

Anna Brooks colors a lot. This is her work station. She makes custom cards for her grandchildren, who send back custom-made ones as well.

Although she doesn’t hear so well anymore, Anna Brooks is quick with a smile and a story.

MADISON — She loves birds and coloring. She likes blue birds and humming birds the best, but has a fondness even for the common sparrow. Anna Elizabeth Jones Brooks turned 103 on Jan. 22. She can look out her window in her very tidy house and see Church Creek.

“I have lived in this house for 74 years,” said Brooks.

“I just get along. That’s it. Get up move around but I have to use the walker because I will lose my balance. I had a fall when I was 98. I had to have 16 or 18 stitches in the top of my head. And I think that is what has affected my balance,” said Brooks.

“Until I ended up in this chair, I was busy all the time,” she said.

Her daughter Sandra Brooks Sharp said, “She was driving until she was 98.”

When Brooks got out of high school, she worked at the Woolford five and dime. And then from there she worked at P. Frankle. Her husband’s family, the Brooks, was a prominent family in Woolford and Madison. He was a carpenter. He was drafted into the Navy for World War II.

“I was a postmaster. It went from my mother-in-law to me. I had to take tests to get it,” said Brooks.

“I think she worked there 30 some years. Retired in the ’90s. After that I did a lot of retirement work. You know, the Y in Cambridge. They had a pool, and I did a lot of volunteer work, and I think that is what has kept me going. Kept me busy doing things. I did join the auxiliary. We did a lot of things that women do. Like most volunteers at companies, women do most of the work,” she said. She has also volunteered at the Church Creek Volunteer Fire Department Ladies Auxiliary.

She remembers the time before the Bay Bridge was built.

“You had to drive all the way around to Havre De Grace. That was a long trip. I took the ferry before that was all built. The river used to freeze a lot. We used to have cold winters, but not anymore,” she said.

Brooks added she has ice skated on the river before.

“We would have bonfires out there,” said Sharp.

“I love my oysters. I like them raw. Slurping oysters, no cocktail sauce, just straight. Archie Brooks had a boat called CNR,” she said.

Her daughter told the story of the night the CNR went out into the Bay.

“He was crossing the Bay to get to the western shore at night, and the boat didn’t have lights on. My father spotted the freighter ship and yelled to my uncle to hit it and he goosed it so it took the tail end off, three feet off the back of the boat. It was a 47 foot boat. It went down and the Coast Guard was right behind the big freighter and they were picked them up within minutes. It was a miracle they made it in. He had the boat restored and put back out on the water. It was built down towards Hoopers Island,” Sharp recalled.

Brooks talked about the advent of cars when she was a girl.

“The first car I remember, I was a little kid. Maybe 8 or 9 years old. I remember back we didn’t have airplanes. Didn’t have cars, because it was a novelty. Only rich people had cars. My father never did have a car. When I lived in Cambridge it was only business people that owned cars. Nobody had transportation but by horseback. We used to have an ice cream wagon that came around the streets selling ice cream. It was covered and pulled by a horse,” said Brooks.

“Momma had 12 children, but she raised nine. I have outlived them all. They had large families back then,” she said.

“I remember when the first television came in. I was here even before the radios. My brother had the first radio that was battery operated. My father came up to his house and put on earphones and listened to the fight. We walked everywhere you went. We were more free than what the kids have now. It was a much safer environment.”

Members of church where they attend came down to sing her happy birthday. They made posters in celebration.

“It really made her day because we don’t take her out except to doctors’ offices for fear of what’s happening in the air,” said Sharp.

Brooks likes to watch Wheel of Fortune, PBS and all the movies on Hallmark Channel.

“They’re pretty good to watch, but I read more than I watch. I like mysteries,” she said. 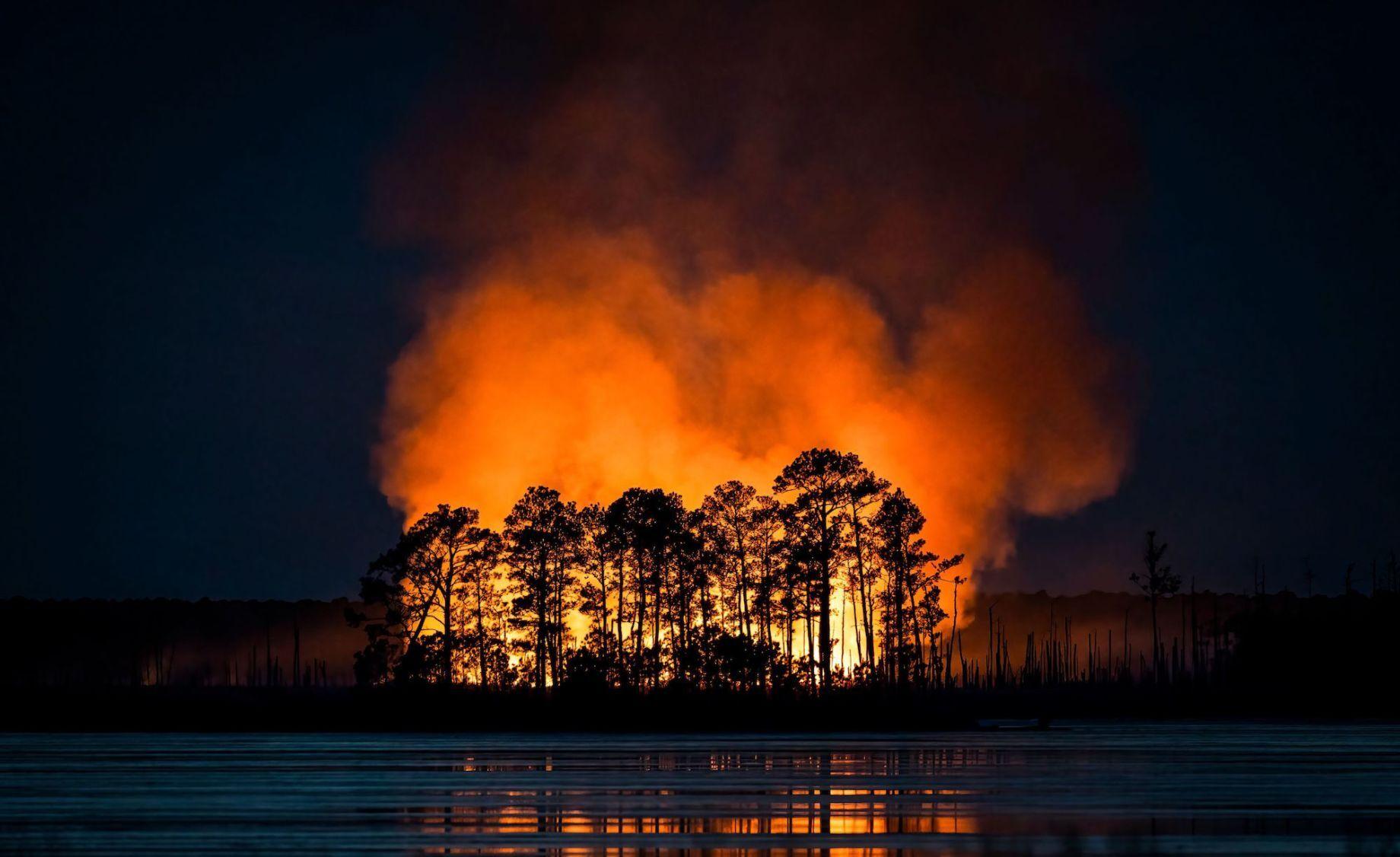 A controlled burn in the marsh at Blackwater National Wildlife Refuge highlights trees and water in the foreground.

Fire and ice at Blackwater

CAMBRIDGE — Opioid overdoses in Dorchester County in 2020 increased 79% from the prior year.

Of the non-fatal overdoses reported by law enforcement, 50 occurred in Cambridge, six in Hurlock and the remaining 18 in other parts of the county. Of the fatal overdoses in Dorchester, Cambridge Police Department reported 10 and Dorchester County Sheriff’s Office reported four.

Rescue Fire Company volunteers work after a storm in April 2020 to clear a downed tree on U.S. Route 50 near Crusader Road in Cambridge.

CAMBRIDGE — The Cambridge City Council introduced an ordinance at their meeting on Monday, Feb. 8, intended to incentivize local police officers and firefighters to live within city limits.

Ordinance 1171 sets up criteria through which officers with the Cambridge Police Department and members of the city’s Rescue Fire Company can be eligible for up to a $2,500 real property tax credit.

If passed, public safety officers who have served actively for more than three years can be eligible for up to five years of tax credit on homes they own and occupy.

Cambridge Police Chief Mark Lewis thanked the council for the introduction of the measure.

“If it’s passed, it will be an excellent benefit to all of the police officers and firefighters in the city,” Lewis said. “It will also encourage recruitment and retention for our agency, which is something that is needed very badly.”

Rescue Fire Chief Adam Pritchett said he thought the measure could be a good incentive for RFC firefighters, and would provide an additional benefit of encouraging responders to live closer to the city.

“The closer they are to the fire station, the quicker they can get on the road,” Pritchett said.

Lewis said Cambridge officers living proximally provided the city with additional benefits, as off duty officers that are on call could respond for rapidly and the take home car policy could be more effective. Lewis said the incentive could lead to more “local young officers that are committed to the city — stakeholders in what we’re doing.”

Pritchett said of roughly 50 active RFC members, 12 live in the city, with many others living “just outside the city limits.” He said staffing for RFC has been level for 10 to 15 years and that the maximum roster of 75 has not been reached in 20 or 30 years.

Lewis said CPD has 39 of 46 potential officers, and he just received confirmation that his department is losing one officer to Salisbury Police Department on March 1.

If the ordinance is enacted, the city manager will review the number of active police and firefighters annually to determine the effectiveness of the measure.

Lewis said compensation for an officer in training could total about $45,000, which is not always recouped if an officer leaves before their five-year contract has expired.

Bradshaw said that if the currently eligible public safety officers received the credit, the decreased tax revenue would total less than $45,000.

He continued, “What we also can’t afford is hiring officers and being a training ground for those officers, only to watch them move on to other agencies that have higher pay and less stressful situations for their officers.”

Bradshaw called the potential ordinance a “first step” in retaining and recruiting and police and firefighters with “the necessary experience.”

The ordinance was introduced by a 5-0 vote of commissioners.