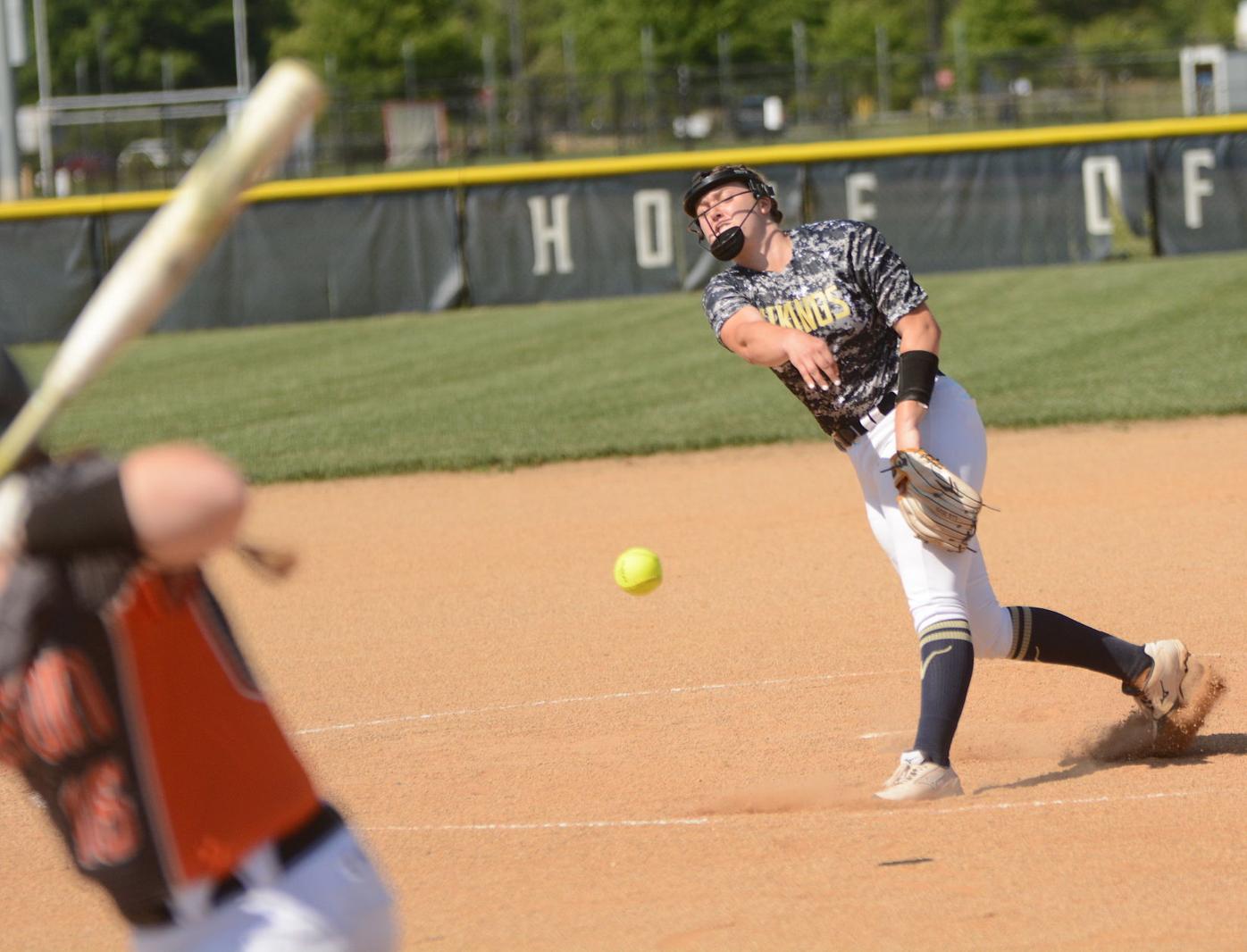 Cambridge-SD ace Maddie Pleasants struck out 15 and walked none Friday during a 1-0 victory over Easton. 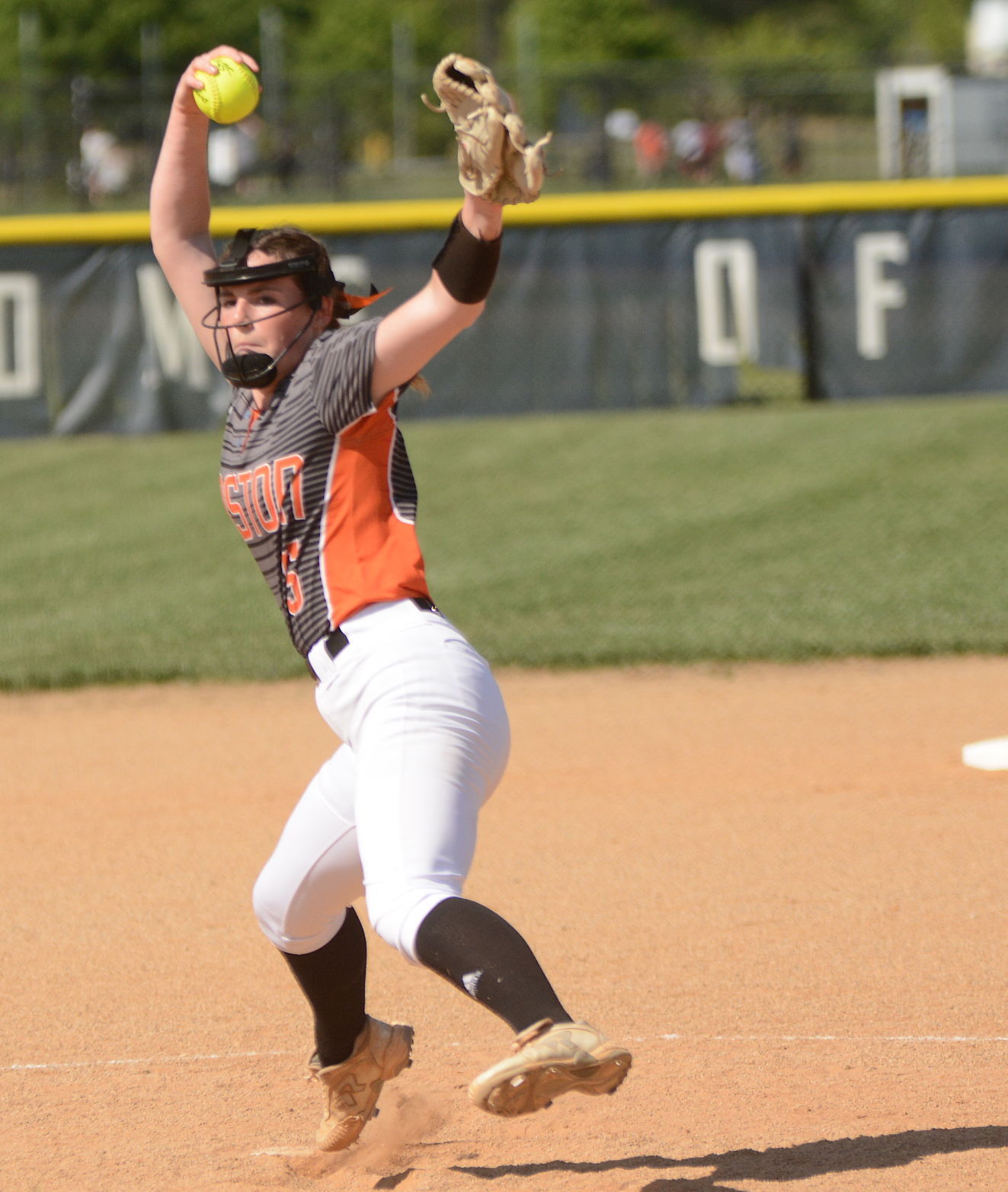 Easton’s Kate Chapple foiled scoring threats in the second, third and sixth innings Friday before the Vikings scored on a squeeze bunt in the seventh inning.

Cambridge-SD ace Maddie Pleasants struck out 15 and walked none Friday during a 1-0 victory over Easton.

Easton’s Kate Chapple foiled scoring threats in the second, third and sixth innings Friday before the Vikings scored on a squeeze bunt in the seventh inning.

CAMBRIDGE — Maddie Pleasants has flirted with perfection seemingly every time she’s stepped on the mound this year.

Friday afternoon, Cambridge-South Dorchester High’s softball team found perfection from two other sources, as Nat Kerr slid home on freshman M’Kya Molock’s perfectly placed squeeze bunt with one out in the bottom of the seventh inning to give the Vikings a 1-0 victory over Easton to remain unbeaten.

“I was nervous,” said Molock, who was 0 for 2 with a walk prior to her final at-bat. “One out, I’m up. I got out every other time I was up to bat. So I was like going to make this one count, last inning.”

Pleasants (6-0) and Easton’s Kate Chapple (4-2) carried a scoreless pitchers’ duel into the bottom of the seventh inning.

With one out, Chapple walked Kerr, then intentionally walked Pleasants, who had doubled and singled in three at-bats. Chloe Warrell (2 for 3) singled to left on an 0-1 pitcher, but Warrior left fielder Jess Millard quickly got on the ball, holding Kerr at third.

That brought up Molock, who looked at the card attached to her wrist after receiving the sacrifice bunt sign from Viking head coach Kareem Otey, who was standing in the third-base coach’s box.

“I looked at it (the card) about three times to make sure I was right,” said Molock, whose first bunt attempt landed foul. “Then she called sac again. Looked at it about four or five more times. It was a sac. I laid it down and then I just ran. I almost stepped on the ball, but I just ran to first.”

Kerr broke on contact and slid across the plate before Chapple or catcher Hannah Romanik could make a play.

“At that point, bases loaded, bottom of the seventh, one out, what did I have to lose?” Otey asked rhetorically. “So I gave her the bunt. She kind of popped (the first pitch) foul far enough to get away from the catcher and then she finally executed perfectly. It was beautiful. And Natalie got the perfect jump. And luckily, Natalie is our fastest girl and she was on third. It was like a blessing. It was just beautifully executed.”

Before that winning play, Pleasants and Chapple — both college bound — showed why they’re two of the Bayside Conference’s best.

Pleasants, who prior to Friday had thrown a no-hitter, three one-hitters, and a two-hitter this season, yielded a season-high four hits, struck out 15 and walked none.

“I can’t say enough great things about Maddie,” Otey said. “She is just a workhorse. And she’s really turned into a general on the field. Before I can even make an adjustment to somebody, I mean she’s on it. She just knows the game so well. She was very composed.”

But Easton (4-2) didn’t get a runner past second base until the sixth. With one out, Tara Wozniak struck out but reached base on a dropped third strike. Pleasants fanned Millard. Briner then hit a high fly ball that landed in front of Viking left fielder Amelia Schuyler, putting Wozniak at third and Briner at second. The rally ended there, as Cambridge-SD shortstop Warrell ranged to her right to snag Erica Barrow’s line drive for the final out.

“I was a little nervous, but I’ve learned on the mound in hard and tough games just to keep my cool and to focus on one batter at a time,” Pleasants said after her throwing her fifth straight shutout. “Twenty-one outs. Focus on getting that down and the last inning I was just focused on every single out. If you simplify it makes things a lot easier.”

Baillif reached on a dropped third strike with two outs in the seventh, but Pleasants got Sam Mason swinging to end the inning. Pleasants struck out 12 swinging.

“She’s good,” Easton head coach Jen Powell said of Pleasants. “We knew that coming in. She was in a zone today. She did really well.”

As did Chapple, who allowed eight hits, walked three, struck out six, and foiled Viking scoring threats in the second, third and sixth innings.

Schuyler and Bailie Dickinson hit back-to-back, one-out singles in the second, and advanced to third and second, when Myra Peters bounced into a fielder’s choice. Chapple then hit Irelyn Corbman with a pitch, loading the bases, but escaped the jam when she got Kerr on an inning-ending pop-out to second.

Pleasants roped a leadoff double in the third and was sacrificed to third by Warrell. But for a second straight inning, a Cambridge-SD runner was left stranded at third, as Chapple fanned Molock, then got Gretchen Richardson to ground out to second.

“Kate is another great pitcher,” Otey said. “She kept us on our toes. She likes to work the ladder up the strike zone and she got a lot of our girls. We kind of knew that going in, but they still fell for it. She did a phenomenal job.”

The Vikings pieced together still another threat in the sixth, when Molock was issued a leadoff walk and moved to second on Schuyler’s one-out single to center field. But Chapple struck out Dickinson swinging before getting Peters to pop out to first.

“Not much you can ask more out of Kate than what she gave today,” Powell said. “It’s a great job. I’d like to have a couple more hits. We held off all day. We had opportunities to score and didn’t.”

CENTREVILLE — Kamryn Brandt had two hits and drove in three runs, and Tristyn Stewart and Ryleigh Jordan each had a pair of hits and one RBI to pace the unbeaten Lions.