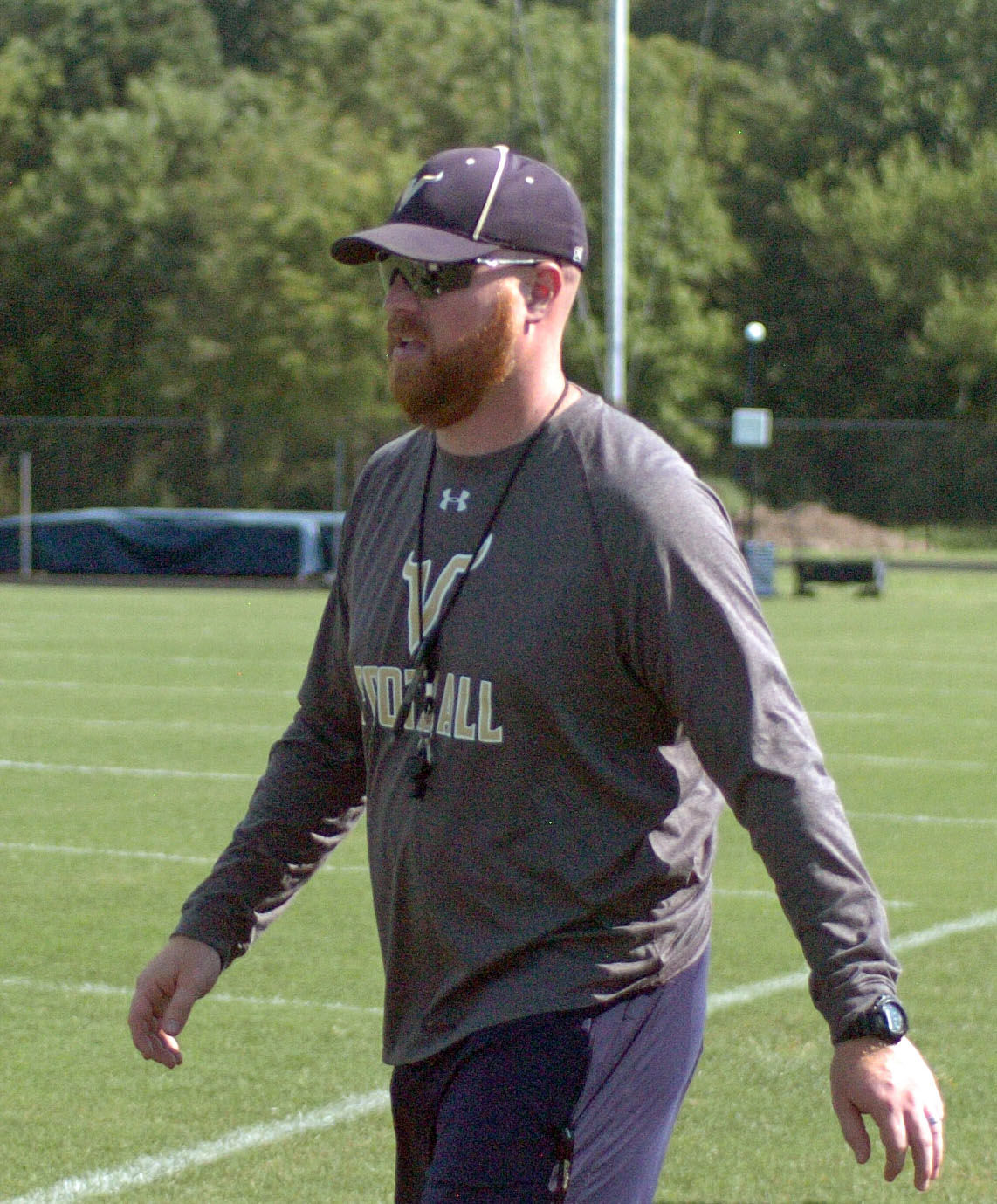 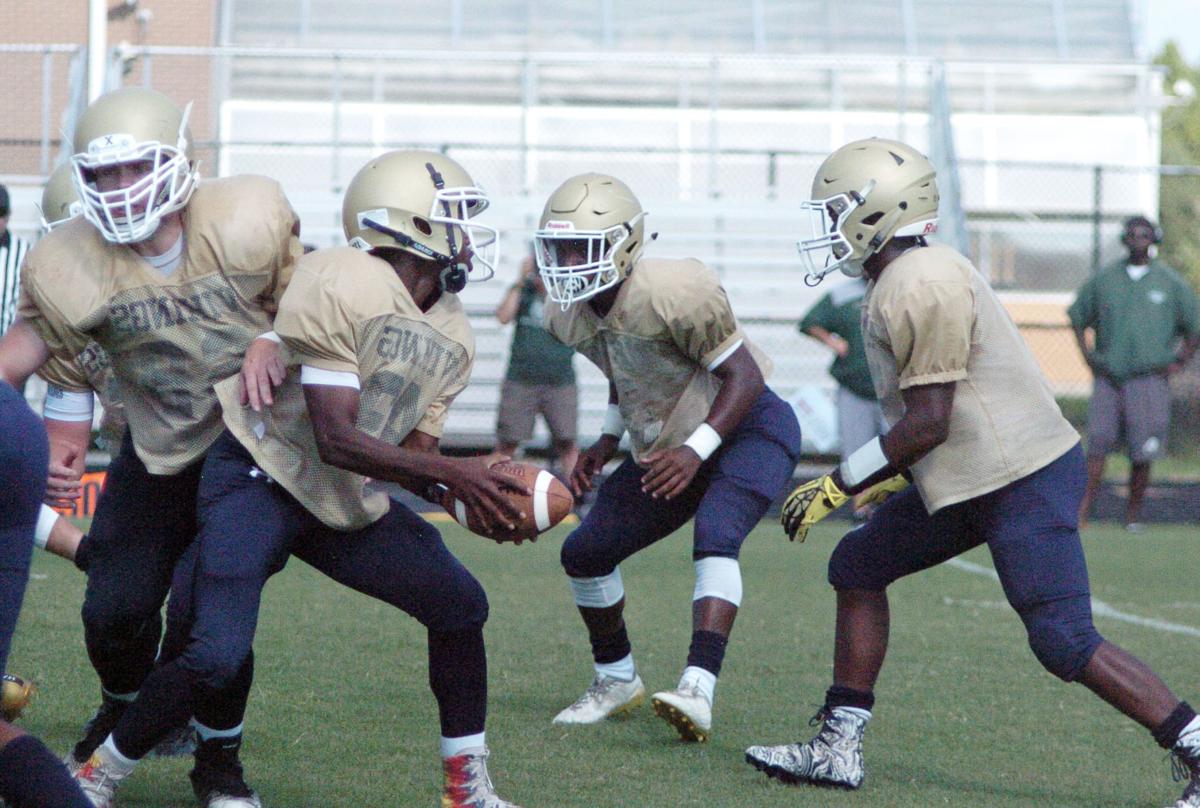 The Cambridge-South Dorchester backfield includes senior Jaquan Farrare (second from left), who’s in the running for the job as starting quarterback. The Vikings open their 2018 season at home against Queen Anne’s County on Friday at 6:30 p.m.

The Cambridge-South Dorchester backfield includes senior Jaquan Farrare (second from left), who’s in the running for the job as starting quarterback. The Vikings open their 2018 season at home against Queen Anne’s County on Friday at 6:30 p.m.

CAMBRIDGE — Gaven Parker knows he’s only the second man in more than half a century to coach a Cambridge high school football team bearing the name of the town, who didn’t actually go to school there.

“The other one was Doug Fleetwood, I know,” said Parker, who was named head coach of the Cambridge-South Dorchester program on April 27. “Big shoes there.”

Parker also played for Fleetwood, but at Salisbury University. The small-world theme of the Viking program is paralleled there as well. Parker, a Laurel (Del.) High alumnus, graduated from SU in 2013, a decade after Coleman.

Coleman, who led Cambridge-SD for 12 years, compiling an 85-53 mark during that span, stepped down as head coach last spring, but remains an assistant.

Dorchester County football historians also know Fleetwood is the only coach to win a state title in that town, earning championships in 1979, 1995, and 1996. Is there a similarity in that, too?

“Oh, man, don’t put any pressure on me now,” Parker responded with a laugh when asked about his similarity with Fleetwood. “I just got here.”

Humble to a fault, Parker knows the history of perhaps the most storied Bayside Conference football program. He’s been here for a bit of it, having come on board in 2013, the year the Vikings made their first state final-four in over a decade with a 42-0 Class 1A East Region final rout of Perryville.

“It’s a privilege and an honor to step in and take over something that has such history,” Parker said, “a community that prides itself on the football team. I’m in a cool little niche, because Doug Fleetwood is the reason I’m here.

“He pointed me in this direction, finishing up my senior year of football,” Parker added. “I spent my last five years on staff here at C-SD, three years as the varsity offensive line coach, and the past two as the offensive play caller.”

“Jake’s obviously my mentor,” Parker said, “and did a lot for this program. And I think one thing that Jake did is he set me up for success. You know, there are a lot of things that he had worked really hard to get together. Obviously, we do a phenomenal job fundraising and that’s gonna continue. We have a culture of winning.

One difference is the addition of Al Waters as defensive coordinator. Waters is well known for his 15 seasons working with head coach Donny Graef at Queen Anne’s County. Along with Waters from Queen Anne’s comes Matt Phillips, an instructor for offensive and defensive linemen.

“I think the biggest on-field thing you’ll see is the defense, is Al Waters,” Parker said. “He’s brought his style and his mentality to the team. Jake did a phenomenal job building a support system. I am blessed to have the support of the staff, guys who’ve been around a long time, plus Al and Matt.”

Though he wouldn’t divulge his defensive scheme, saying, “we’ll leave that to the (game) film,” Parker did say, “Al has built himself a reputation of having very disciplined defenses, and he has tried to find a way to be very successful against Bayside offenses.”

Up front on defense will be the formidable presence of 6-foot-5 junior Tranell Clanton, a 250-pound defensive end who can also play linebacker, and will see time as tight end on offense. Avery Nichols and Hykeem Cropper, along with Caleb Scott and Dylan Doll fill out the defensive line, with Malik Ennals, Donald Banks, Jeremy Taylor, Jacob Smith, Camren Lake, and Clanton providing back-up.

“Tranell is a guy who moves well for his size and he’s extremely physical,” Parker said of Clanton. “He’s got a lot of upside.”

Many of the defensive backs will also return kickoffs and punts. The kicking and punting duties — a Viking strength for the last 15 seasons or more — may fall to soccer player Drew Warfield.

The quarterback position, as of late last week, was “still undecided,” according to Parker, but will become the job of either sophomore John Henry or senior Jyquan Farrare.

“John’s got some talent and potential, and Jyquan, he provides some senior leadership, and he’s really hungry. We’ll see,” Parker said. “I think we’re gonna be quick with the ball, but our line work is still coming along.”

Sticking to the sweep-heavy, Vegas-package-sprinkled offense that’s become a staple, Parker will rely on Beasley, Ennals, Young, Ethan Bloodsworth, Lake, and Belizaire to carry the load. Middleton and Roberts will spread things out as receivers.

Blocking will be senior center Scott in the middle, along with offensive linemen including junior Avery Nichols, his sophomore brother, Ira, Ryan Fraccaroli, Ray Johnson, Doll, and Darian Gabriel.

Does the opener against Queen Anne’s have any special import, since it’s Parker’s debut, and a couple Lion assistant coaches have come on board?

“It’s no more than any other game,” Parker said. “I think it’s just a game, and obviously they (Waters and Phillips) have an emotional attachment to the kids which is the hardest piece of this. It’s not necessarily school-versus-school, but they have time in there. These guy are dedicated guys, and they have put in time and energy.

“It’s a one-game season, every week,” Parker said. “We’re looking to go 1-0; Queen Anne’s is very talented, they’re a large team, and there’s no looking at it any other way. We’re gonna take it one week at a time.

“I think one thing Cambridge has always done well is, we’re not scared of anyone,” Parker added. “These are good teams, they’ve got some good athletes on them. Obviously we have to have our ducks in a row, but we’re not sitting here chalking up losses, not saying there’s only six games we can compete in.

“Is the reality of maybe going 0-3 there?” Parker asked rhetorically. “Obviously it’s a possibility. But we’re not excuse makers. Whether we start the season 3-0, 0-3, 1-2, or 2-1, we’re going to ... get into a rhythm here, win or loss. We’ve got to get ourselves into a weekly kind of regimen.

“What sets us apart from other programs is we don’t make excuses,” Parker said. “We’re a 1A school, and we get four kids, we’ve got of the 70 kids in the program, four kids who are ‘out of district,’ four who live in the North Dorchester area. The teams that beat us, beat us.... That’s just how we’re going to play it. We’re not gonna worry about things we cannot control.”