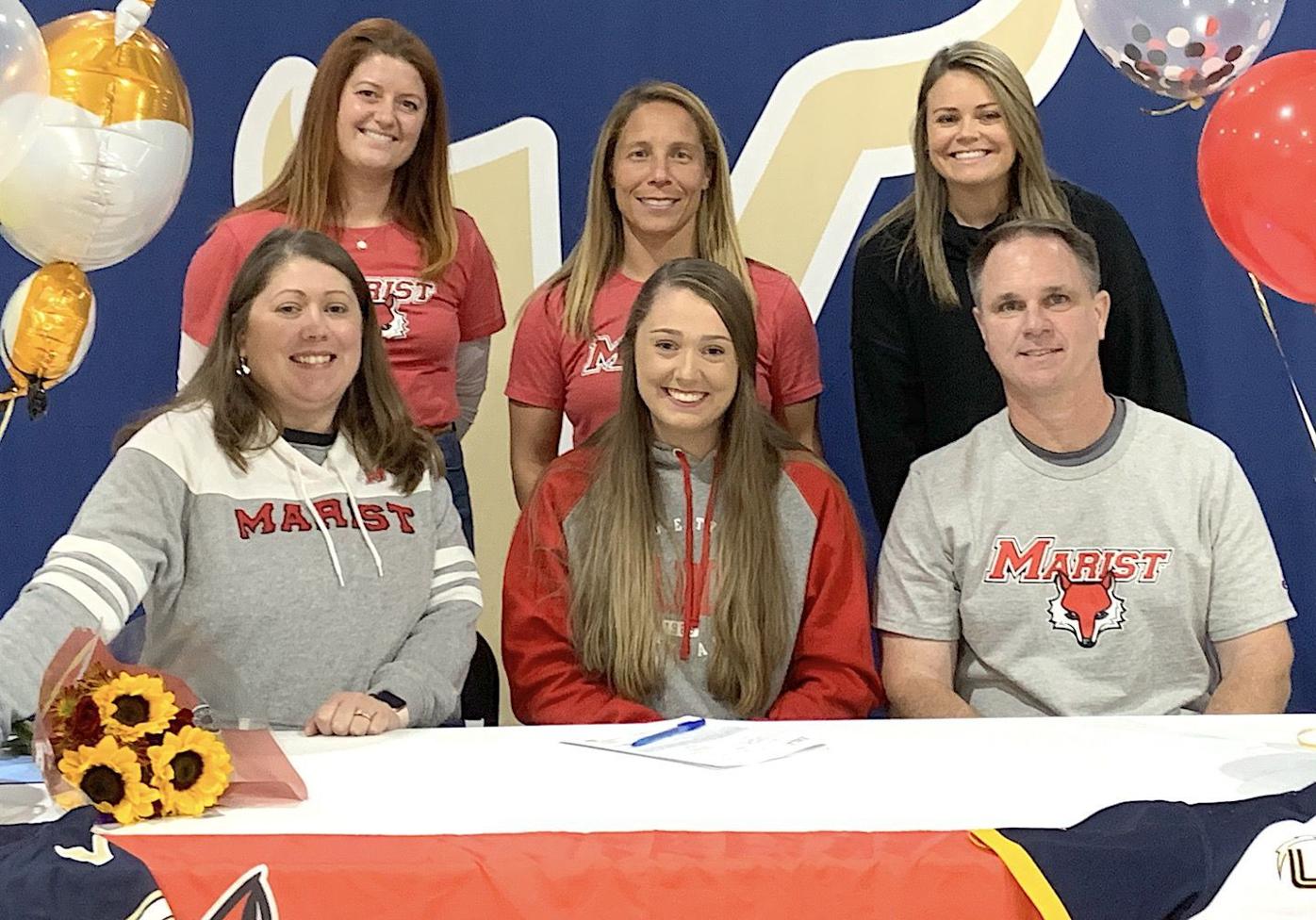 Cambridge-SD High softball standout Maddie Pleasants, seated center, signed her national letter of intent with Marist College on Tuesday, with her parents Wendy and T.R. Pleasants at her side, and coaches, from left, Carly Martin, Kareem Otey and Logan Green behind her. 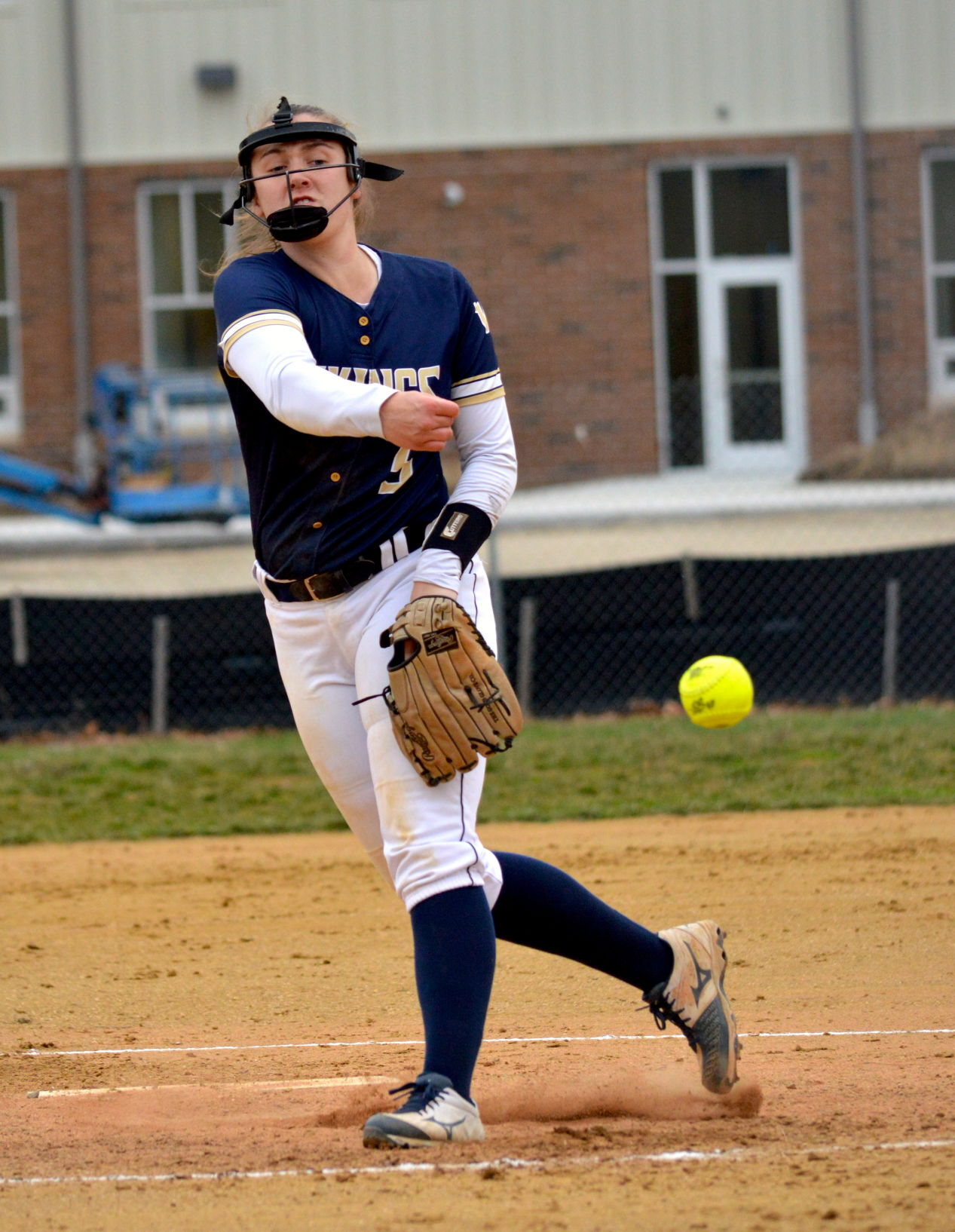 Cambridge-SD High softball standout Maddie Pleasants, seated center, signed her national letter of intent with Marist College on Tuesday, with her parents Wendy and T.R. Pleasants at her side, and coaches, from left, Carly Martin, Kareem Otey and Logan Green behind her.

“I used to give hitting lessons many years ago over in Hurlock, and I used to see this girl come out, she was probably in sixth, seventh grade, pitching to her parents,” said Otey, Cambridge-South Dorchester High’s head softball coach. “I remember watching her and thinking, ‘That girl is going to be great.’ I remember at that point thinking, ‘This girl is going to do big things when she gets to high school. And if she continues to progress the sky’s the limit for her.’”

Pleasants, who has set a slew of single-season and career school records in two seasons at Cambridge-SD, did her next big thing Tuesday afternoon, when she signed her national letter of intent to play softball for Division I Marist College in Poughkeepsie, New York.

“Going to the softball camps I really got to know (Marist head) coach Joe (Ausanio) and coach Morgan (Royer), and I really love the atmosphere he has with his girls,” Pleasants said of her decision to sign with Marist. “He’s so in touch with them. He’s not all about softball. He’s about family.”

The Vikings’ ace pitcher attracted the interest of several schools, including James Madison, the University of North Carolina Charlotte, Bucknell, Delaware and Marshall. But there were a number of intangibles that made The Red Fox her final choice.

“He (Ausanio) does 12-hour weeks, which is two hours of practice a day, and it’s a fun place to be,” Pleasants said. “There’s a transfer portal (and) he hasn’t had one girl try and transfer from him. He’s just a great coach.”

Pleasants, who also plays soccer, got intrigued by softball watching her older sister, Allie, play, and her love for the game has only grown.

“I’ve always wanted to be the best, and really try and succeed at things,” said Pleasants, who signed her national letter inside Cambridge-SD’s gymnasium in the company of her parents, T.R. and Wendy Pleasants, Otey, and pitching coaches Carly Martin and Logan Green. “And from there it grew on as the team aspect, the family aspect. I wasn’t just playing for myself. I was playing for the girls I was with. I wanted to do my best for them.”

No North Bayside player put up better numbers than Pleasants over her freshman and sophomore years, when she was named the All-Mid-Shore Player of the Year and led the Vikings to consecutive appearances in the Class 1A East Region championship game.

She went a school-record 16-4 on the mound as a freshman, with an earned-run average of 1.76, logging 232 strikeouts, against 62 walks over 135 innings. She also had six shutouts, two no-hitters, including a perfect game, and two one-hitters. She followed that with a 14-6 mark in 2019 that included a 0.89 ERA, 221 strikeouts, 42 walks, five no-hitters (one perfect game), three one-hitters and seven shutouts.

Some might think those numbers might overshadow what Pleasants has done at the plate. Otey is not among that group.

Pleasants, who has a 4.43 grade-point average and plans to study nursing, verbally committed to Marist in September 2019 and figured to continue piling up impressive numbers last spring, but had her high school season canceled by the COVID-19 pandemic. She did play in about six tournaments over the summer with her travel team — Lady Lightning Gold out of North Carolina.

“I think she’ll do just as well as she did in high school,” Otey said of Pleasants’ future in the collegiate ranks. “Her game is going to elevate no matter what team she’s on. Hopefully she gets to pitch and hit because she’s going to dominate. No doubt.”