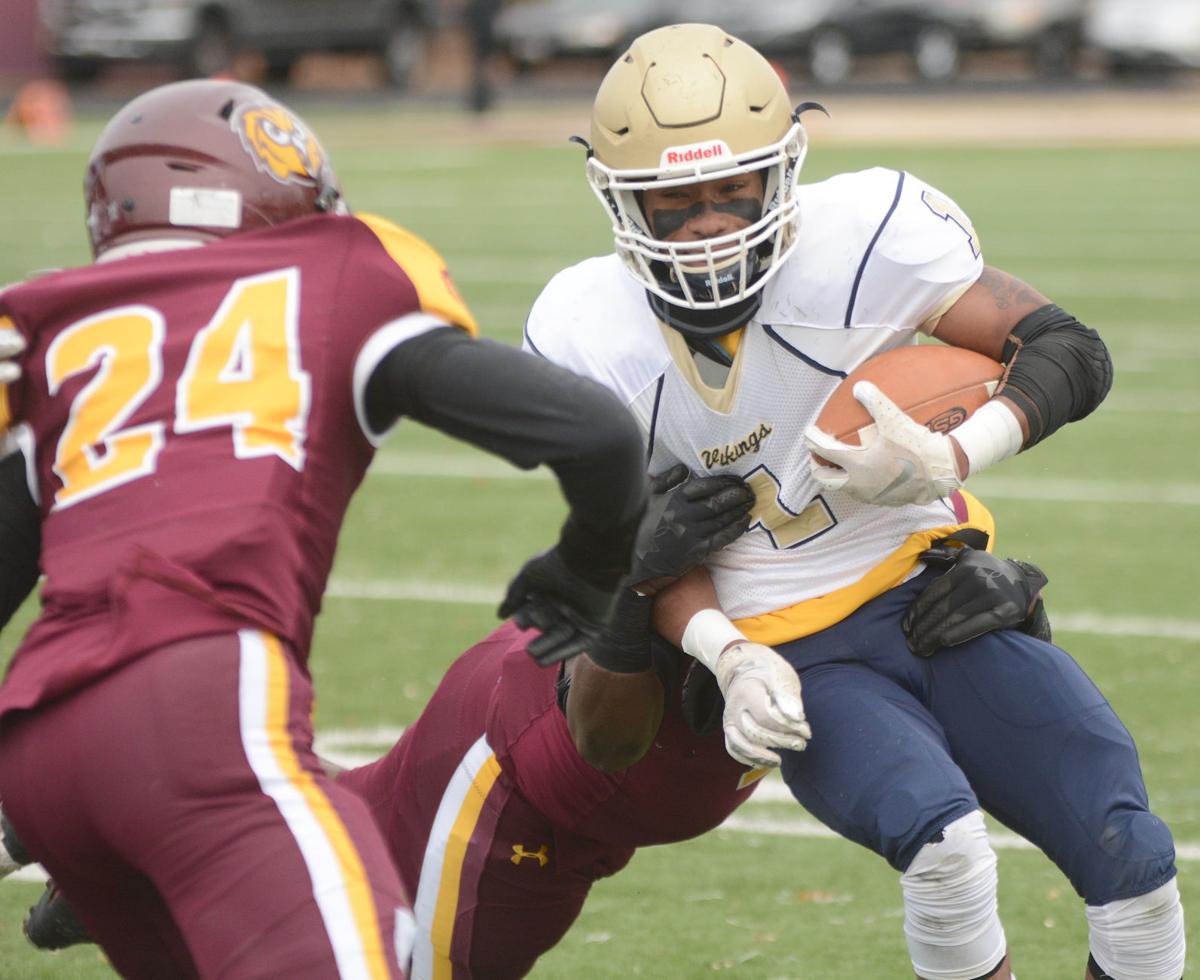 Cambridge-SD running back Khalik Beasley (1) is brought down after a short first-quarter gain during Saturday’s Class 1A state semifinal against Dunbar. 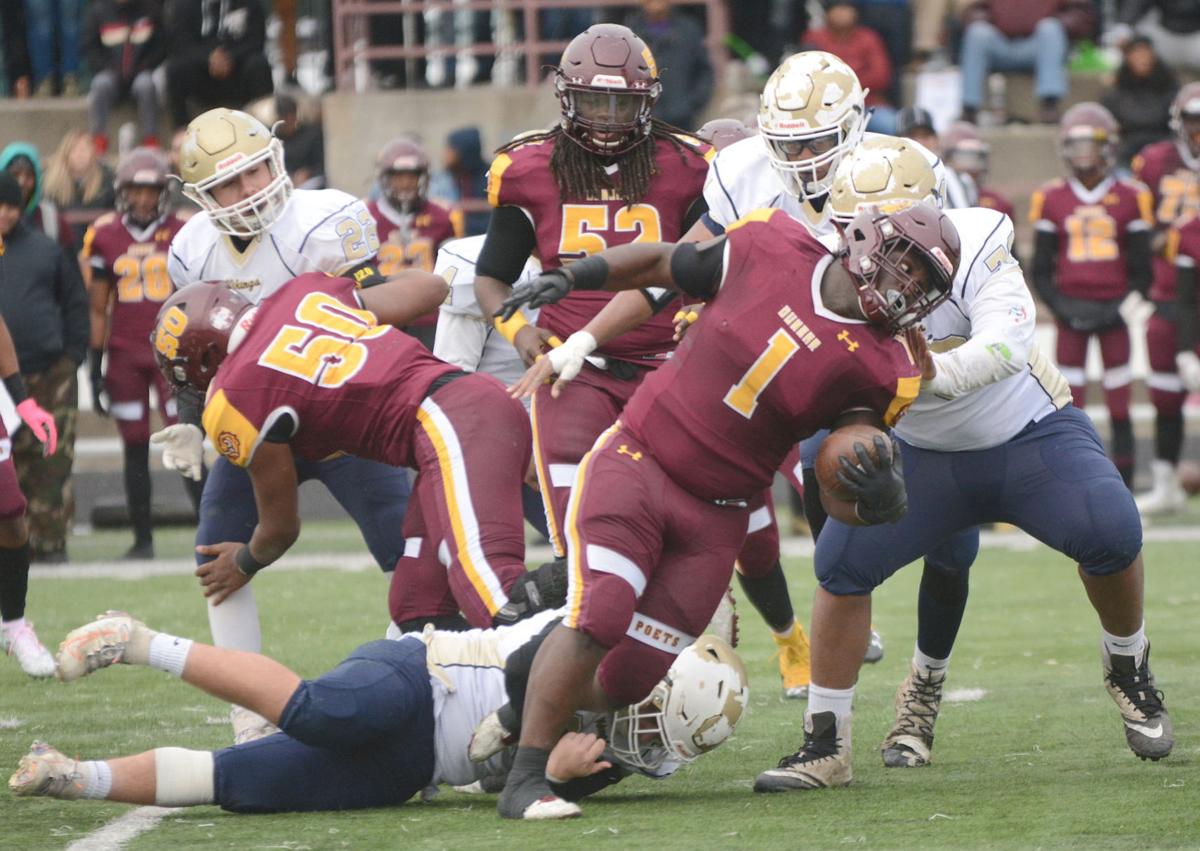 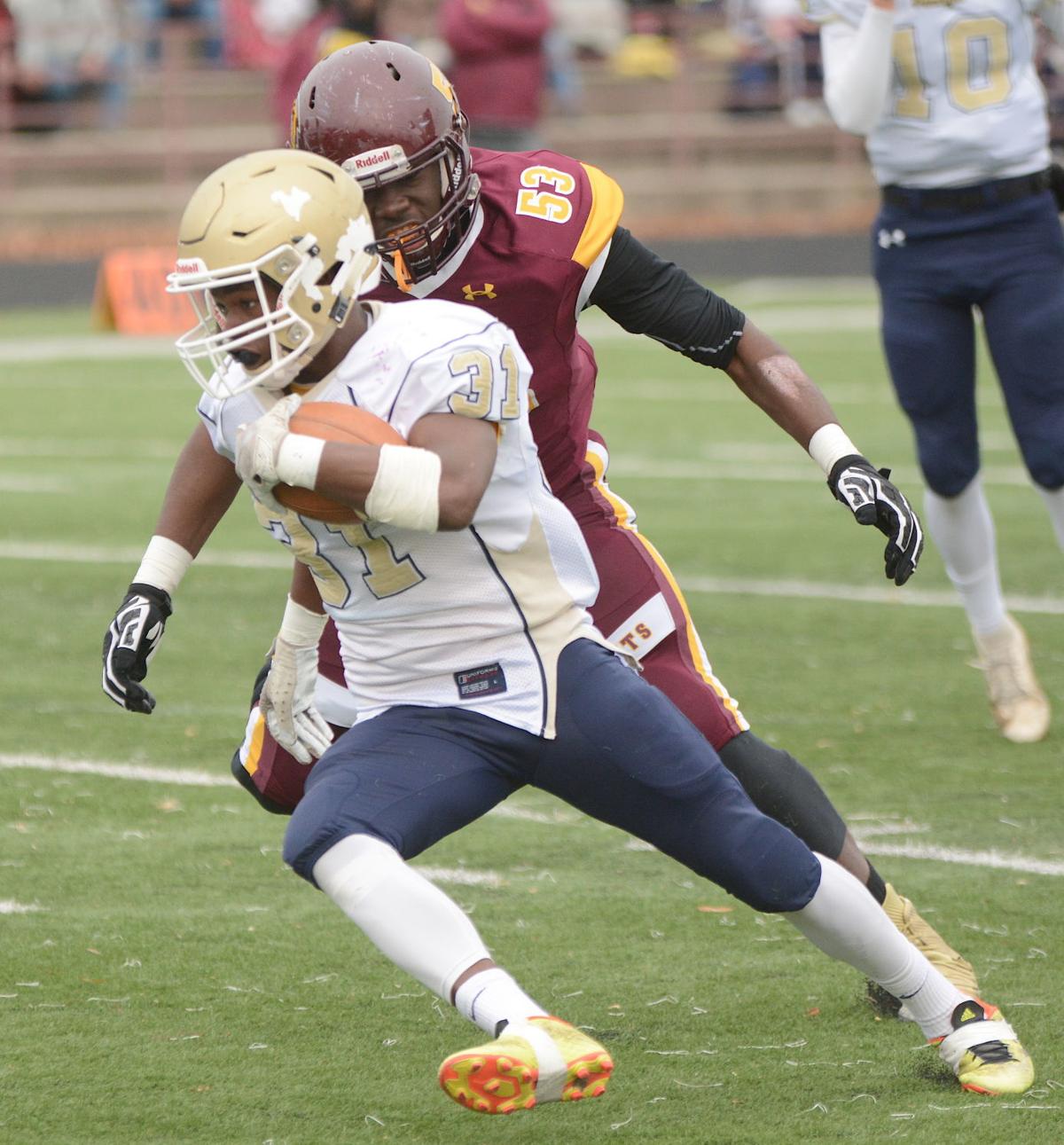 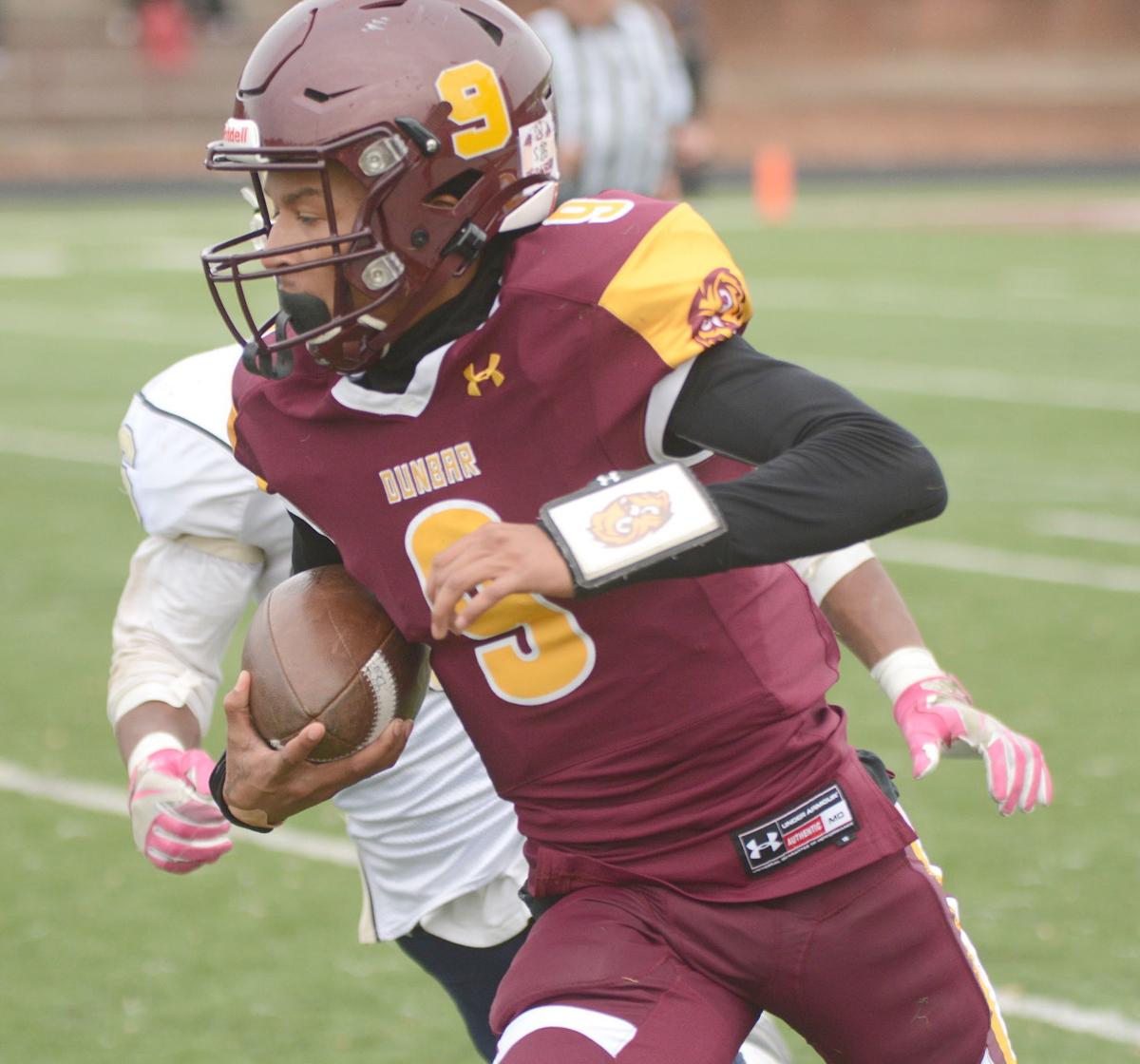 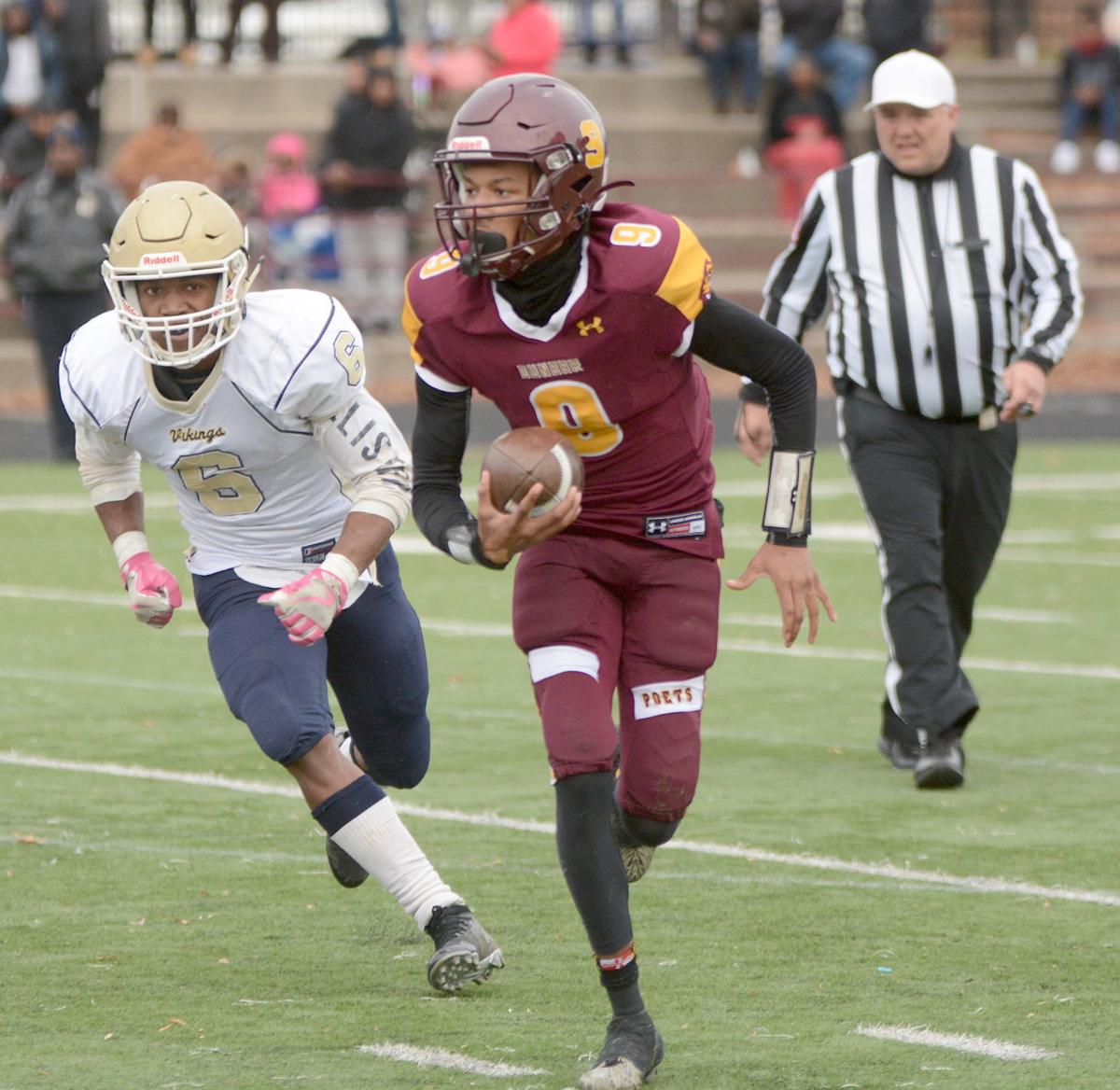 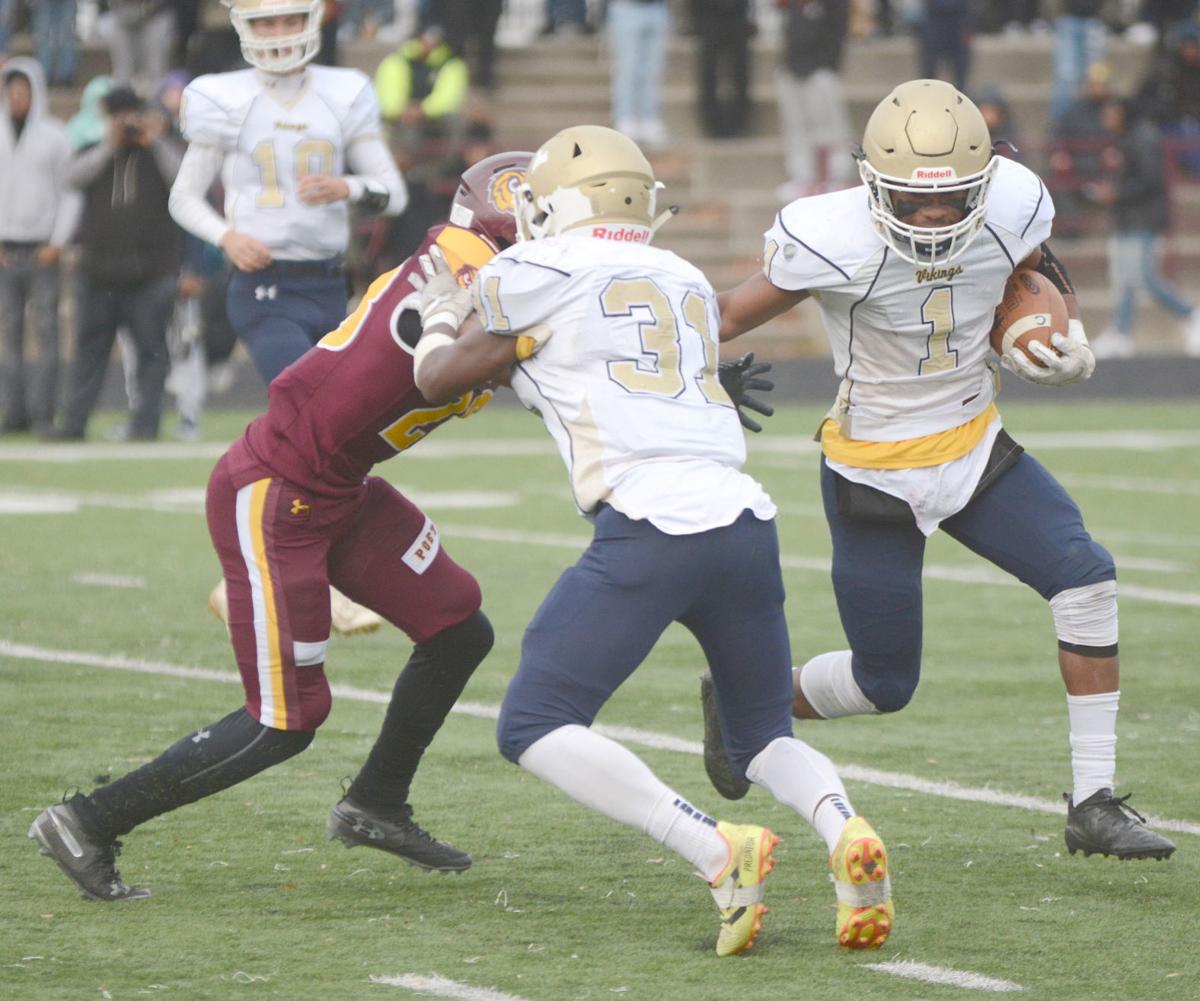 Cambridge-SD’s Khalik Beasley (1) works off a block from Camren Lake (31) during Saturday’s Class 1A state semifinal against Dunbar. 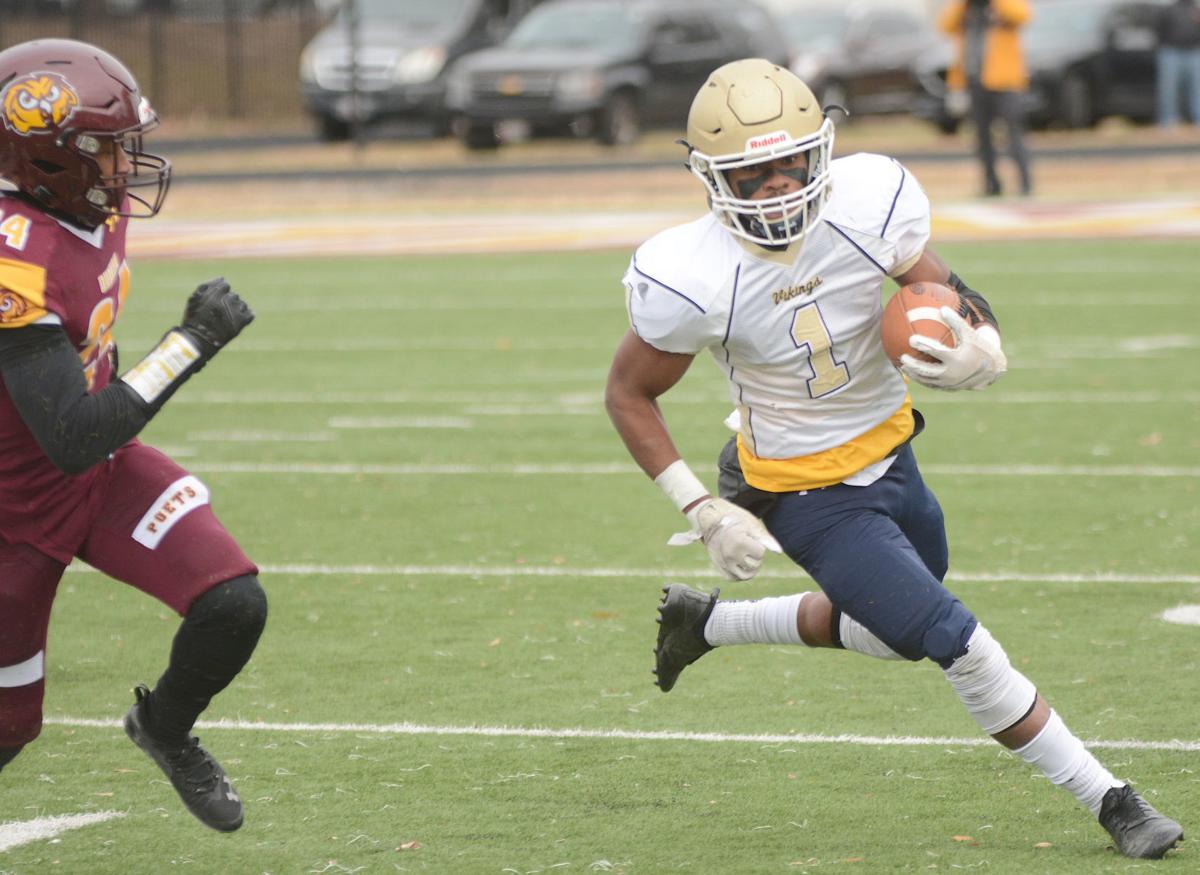 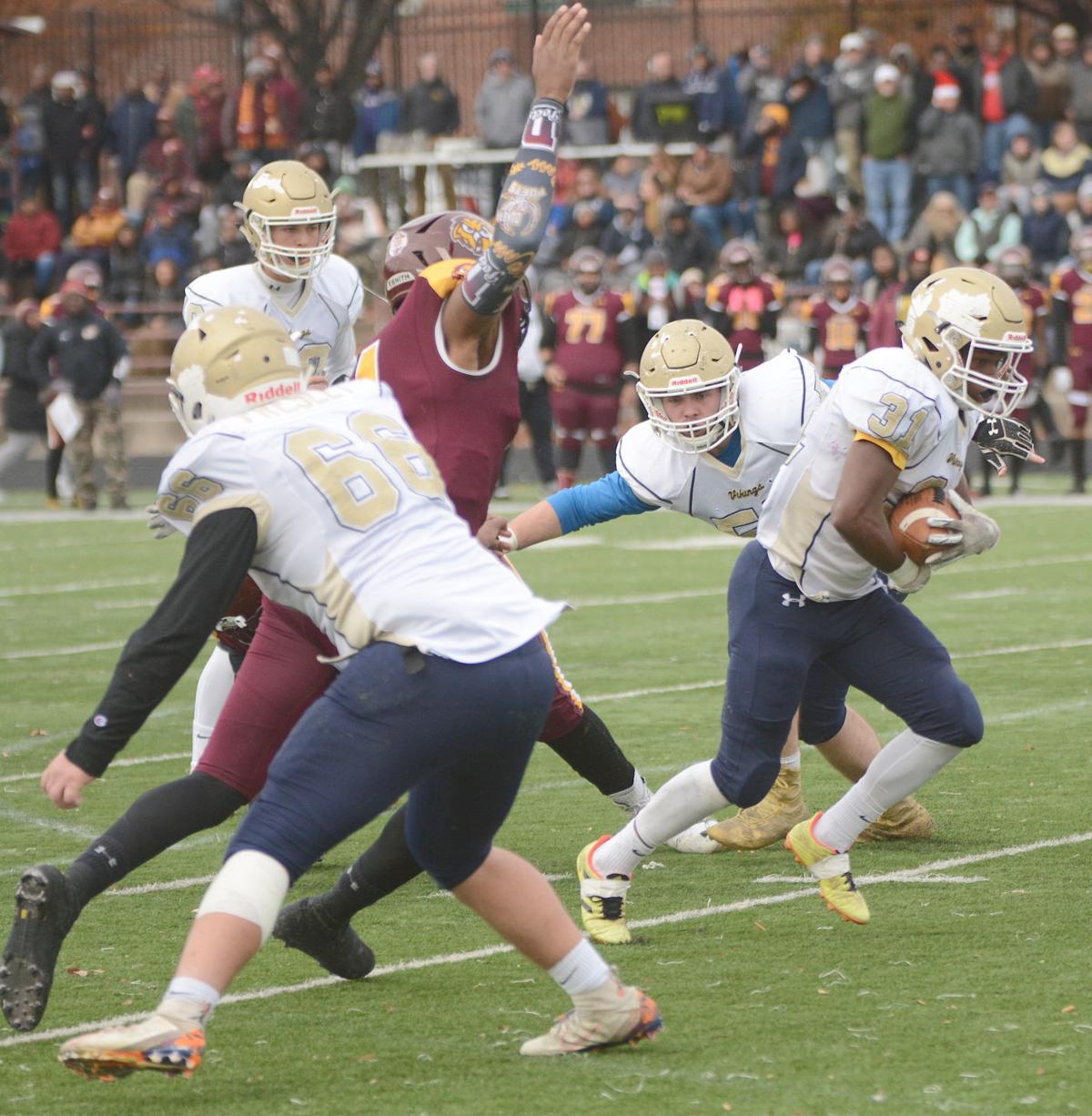 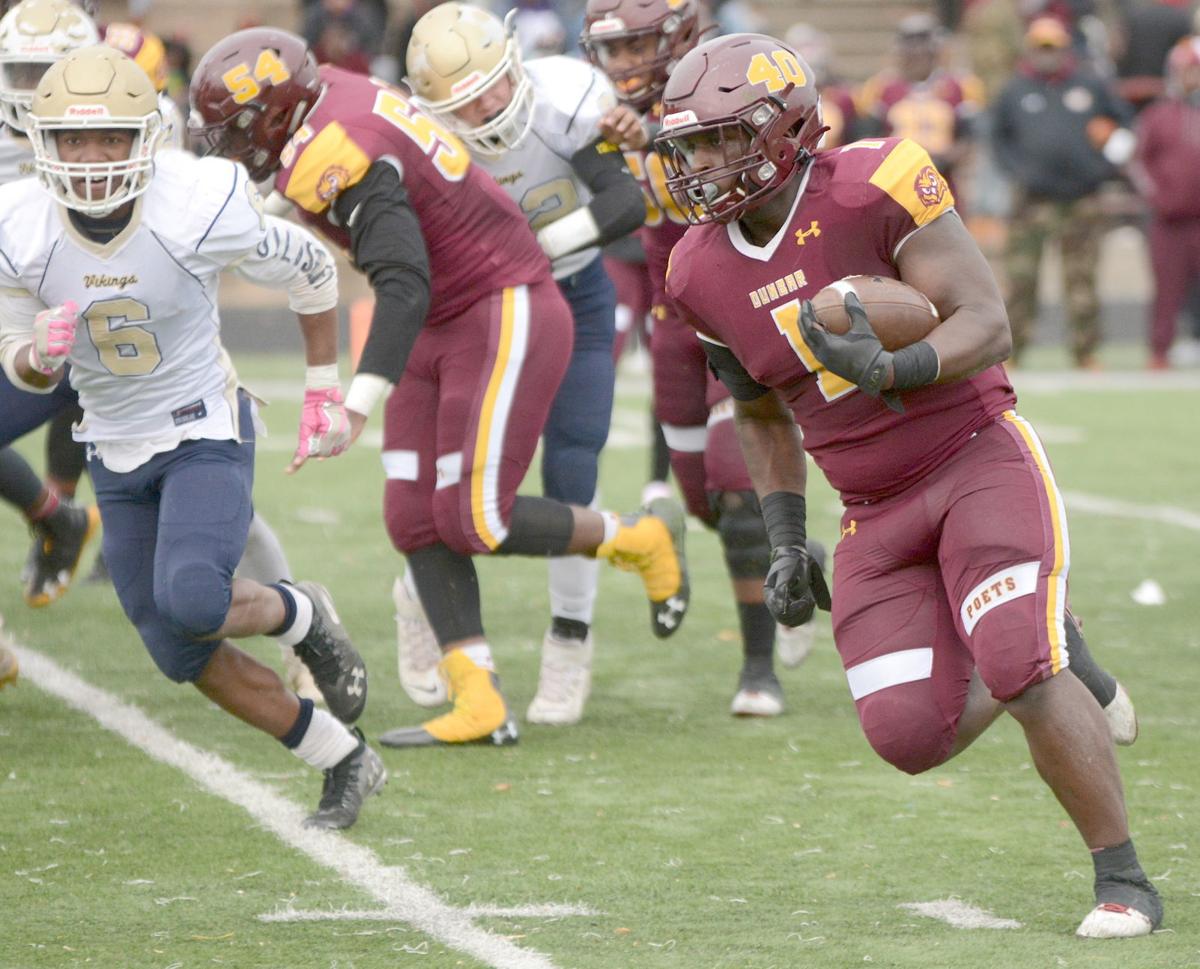 Dunbar’s Dion Crews-Harris (1) sweeps around left end en route to a 29-yard touchdown run in the fourth quarter of Saturday’s Class 1A state semifinal against Cambridge-SD.

Cambridge-SD running back Khalik Beasley (1) is brought down after a short first-quarter gain during Saturday’s Class 1A state semifinal against Dunbar.

Cambridge-SD’s Khalik Beasley (1) works off a block from Camren Lake (31) during Saturday’s Class 1A state semifinal against Dunbar.

Dunbar’s Dion Crews-Harris (1) sweeps around left end en route to a 29-yard touchdown run in the fourth quarter of Saturday’s Class 1A state semifinal against Cambridge-SD.

BALTIMORE — Five times the week before it had ventured inside its opponent’s 35-yard line and the results were four touchdowns and one field goal.

But that was the week before.

Cambridge-South Dorchester High’s football team again pushed inside its opponent’s 35 on five occasions Saturday afternoon at William F. “Sugar” Cain Dunbar Stadium, only this time the Vikings mustered one lone field goal. That was hardly enough to offset Dunbar sophomore quarterback Karon Moore, who threw touchdown passes to four different receivers as the top-seeded Poets rolled to a 45-3 victory in a Class 1A state semifinal.

No. 1 Dunbar (12-1) advances to next Saturday’s 1A state championship game where it will face second-seeded Catoctin (12-1) at 3:30 p.m. at Navy-Marine Corps Memorial Stadium in Annapolis. Catoctin romped to a 41-0 victory over No. 3 Fort Hill on Friday night.

“Regardless, this doesn’t define our season,” Cambridge-SD head coach Gaven Parker said after the Vikings’ season ended at 10-3. “When you look at it, they’ve done something they haven’t done in 20 years — they won a road playoff game (last Friday against Edmondson). And we haven’t been to the state semifinals in five years. Those are all things to hang your hat on.”

What had defined Cambridge-SD this postseason, especially the past two weeks, was its ability to finish drives offensively and shut down the opposition in the second half. The Vikings yielded a combined six second-half points in victories over Fallston and Edmondson, but surrendered 23 against the Poets.

Then there was the offense, which reached Dunbar’s 11, 12, 31, 32 and 12, but scored only once, that coming with 1 minute, 50 seconds remaining in the first half, when James Frazier booted a 31-yard field goal that pulled Cambridge-SD within 14-3.

“We had some opportunities early; didn’t follow through,” Parker said. “Had some tipped balls, some missed blocks. And when you’re in the state semifinals those things got to go your way, especially when you are playing a team of this caliber. This team is of high caliber.”

Dunbar scored on its first possession, when Moore (9 of 13, 142 yards) — on fourth-and-13 — connected with Tyreek Sykes down the home sideline for a 36-yard touchdown pass. Dion Crews-Harris ran in the two-point conversion for an 8-0 lead with 8:05 left in the first quarter.

Cambridge-SD looked ready to answer, driving from its 31 to the Poets’ 11. But on fourth-and-four, senior running back Khalik Beasley (15 carries, 77 yards) was dropped for a 1-yard loss, giving Dunbar the ball on downs.

“First drive we go 60 yards, running the base stuff,” Parker said. “Then you don’t finish. That’s the biggest thing. You’ve got to finish. This team has done a pretty good job of finishing. You got to finish the thing.”

Behind the running of Jeremiah White (15 carries, game-high 135 yards) and Kenyon Washington (6-27), Dunbar appeared ready to extend its lead, marching from its 13 to the Vikings’ 22. But on fourth-and-six, Cambridge-SD’s Donald Banks broke into the backfield and dropped Moore for an 11-yard loss.

The Poets fattened their lead on their next possession though, as Moore hit Rashard Clayborn with a 13-yard scoring strike in the left corner of the end zone for a 14-0 lead with just under six minutes left in the first half. Cambridge-SD stopped Crews-Harris on the two-point attempt.

The Vikings’ lone score was set up when Dunbar’s Nyckholas Simpson overthrew his intended target on a fake punt from the Poets’ 32. Vikings quarterback John Henry (9 of 19, 78 yards) hit Beasley for a 20-yard pickup to the 12. But the Poets stiffened. Camren Lake was held to no gain on first down. Beasley lost two yards. Henry’s third-down pass went off the hand of Malik Ennals, bringing on Frazier for his 31-yard field goal.

Less than a minute of game-clocked had expired and the Poets had increased their lead as Khalil Bailey hauled in a 25-yard touchdown pass from Moore before Kristian Spriggs ran in the two-point conversion for a 22-3 halftime lead.

“We saw the film and we thought they would have trouble stopping us offensively,” Dunbar head coach Lawrence Smith said. “And we just wanted to get the one-on-one matchups. That’s why we felt we had the matchups, because when we went to our base-spread offense, when we go to our five-wide, we felt our wide receivers was better than their corners. And we just told Karon to take the shot that he wanted to.”

Cambridge-SD took the second-half kickoff from its 35 to the Poets’ 31, but on fourth-and-seven, Henry threw to Ennals for a gain of one, again turning the ball over on downs.

Cambridge-SD got inside Dunbar’s 35 twice more. Henry’s 8-yard completion to Logan Middleton was short on fourth-and-14 from the 32 with a minute left in the third quarter. With the clock running, the Vikings drove from their 27 to Dunbar’s 12 over the final six minutes before time ran out.

“When you’re playing this type of team, you’ve got to get those breaks; you’ve got to do the little things right,” Parker said. “We let some slip and that got us behind. We weren’t able to really catch back up after that. I think you just run out of gas.

“The better team won,” Parker continued. “They played very good coverage on our receivers. They just played good team ball. They didn’t make many mistakes. They tackled fairly well. Again when you get to the state semifinals, you’ve got to block and tackle well.”

The Poets cushioned their lead in the second half, starting with Moore’s fourth touchdown pass, a 14-yard toss to a wide-open Dearius Carr with 4:40 left in the third quarter. Spriggs ran in the two-point conversion.

Crews-Harris swept 29 yards around left end for a score 1:22 into the fourth quarter, with Simpson adding the two-point conversion run. On the Vikings’ next play from scrimmage, Henry’s pass went through the hands of Middleton and was intercepted by Davonta Ayers, who raced 25 yards for the touchdown. Baye Diop kicked the game’s lone extra point for the 45-3 final

“By far the best performance of the year,” Smith said his Poets.