Easton’s Julia Hammons, right, watches her penalty kick rise toward the goal in the first half Tuesday against Cambridge-South Dorchester. 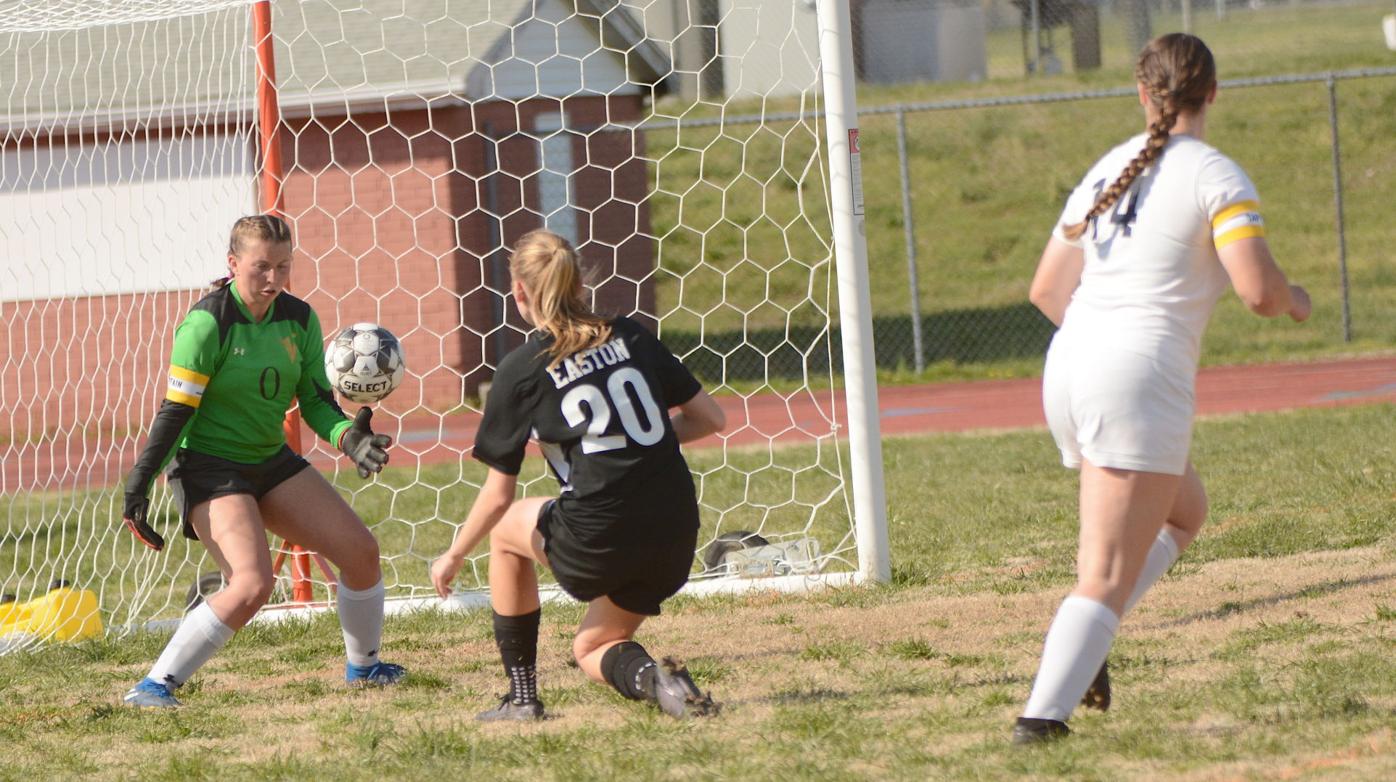 Cambridge-SD keeper Natalie Kerr, left, braces herself for a save that robbed Easton’s Julia Hammons (20) during Tuesday’s first half. 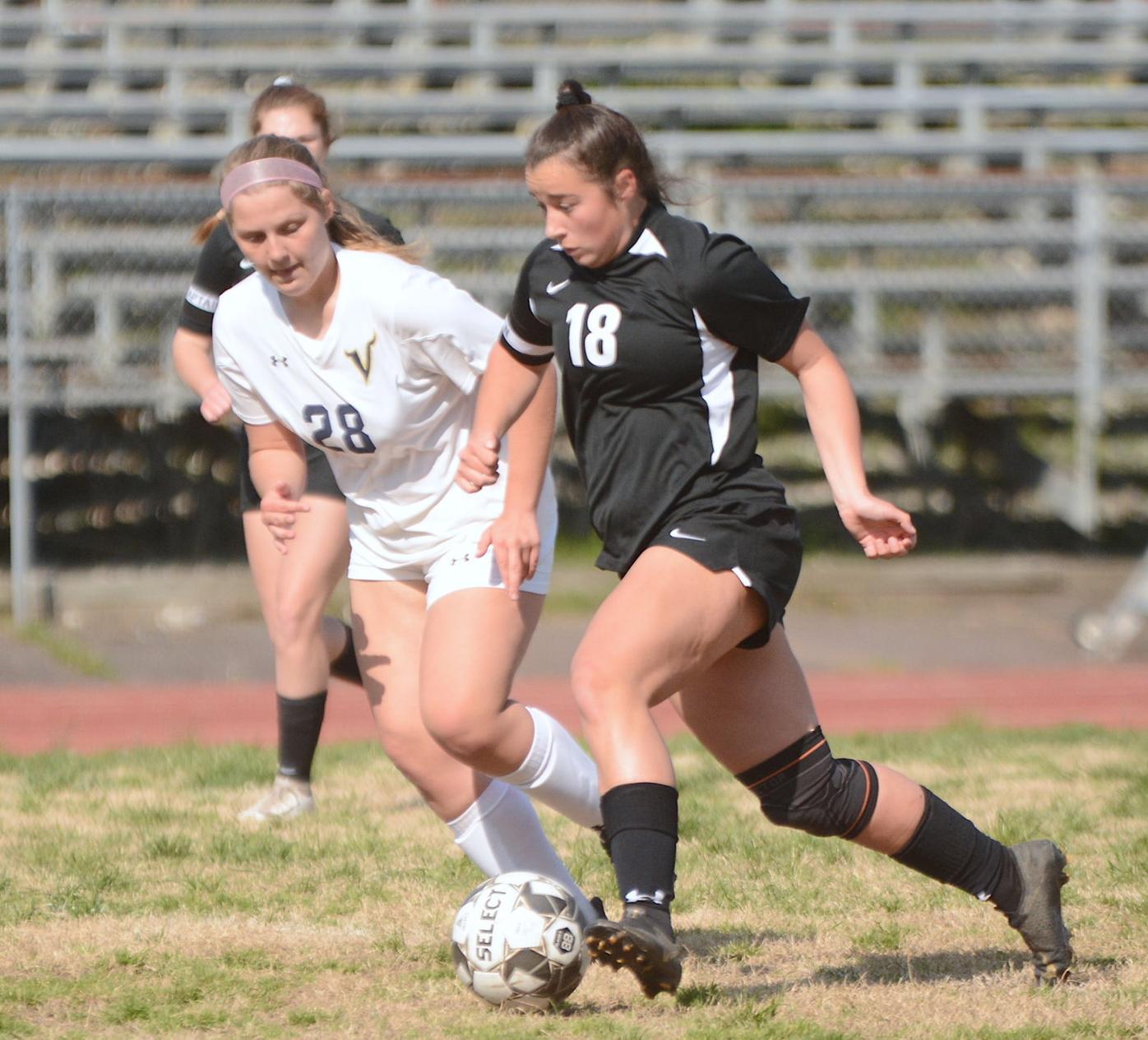 Easton’s Julia Hammons, right, watches her penalty kick rise toward the goal in the first half Tuesday against Cambridge-South Dorchester.

Cambridge-SD keeper Natalie Kerr, left, braces herself for a save that robbed Easton’s Julia Hammons (20) during Tuesday’s first half.

And through 40 minutes Tuesday afternoon, Easton High’s girls’ head soccer coach felt she was scribbling the same note over and over.

“A lot of them were, we look slow,” Pennington said. “We weren’t winning 50-50 balls. We weren’t spreading out and passing like we’ve constantly been working on in order to keep possession; that we didn’t necessarily look like the same team that we’ve looked like this season. I hope that resonated with them. I feel like it did.”

It sure looked like it, as the Warriors scored four second-half goals en route to a 6-0 victory over Cambridge-South Dorchester, as they extended their win streak to five games.

“They had me a little scared first half,” said Pennington, whose team carried a 2-0 lead into the break. “Little bit of a slow start. We’re on spring break right now. We have had practice, but I think it’s just, the sun’s out, it’s nice, which you would think would give us a little bit more energy. But we got there second half. Just needed to regroup.”

After opening the season with a pair of one-goal heartbreakers on the road to Kent Island and Queen Anne’s, Easton battled the Bucs to a 1-1 draw — a game called in the second half because of lightning — before embarking on its current win streak.

But Cambridge-SD keeper Natalie Kerr (17 saves) kept the Warriors off the board through the first 26 minutes, making eight saves — three off direct kicks and a point-blank gem against Easton’s Julia Hammons in the 25th minute.

The Warriors finally broke through with 14:55 left in the first half, when Lily Osborne hammered a shot from about 25 yards out that angled into the upper left corner for a 1-0 lead.

Kerr foiled another direct kick. But with a little over 7 minutes remaining before the break, Kerr was again face to face with Hammons, who was awarded a penalty kick after being taken down inside the box. Easton’s senior standout neatly tuck a shot high and under the crossbar for a 2-0 lead that was carried into the half, when Pennington touched on her list of concerns.

“Our senior leadership team kind of stepped in too and voiced some of their concerns so that we could end the second half on a good note,” Pennington said of the halftime talk.

Easton carried Pennington’s message onto the field in the second half. Osborne tucked a shot just inside the left post for a 3-0 lead with just 1:20 elapsed. Erika George struck a shot wide right in the seventh minute, then banged one off the right post 30 seconds later.

Less than 10 minutes later, Hammons weaved her way through the Viking defense and drilled a ball that Kerr made an initial stop on. But before Cambridge-SD’s keeper could retrieve the rebound Tristyn Mosslih parked the ball into the right side of the net for a 4-0 cushion.

Hammons extended the lead to 5-0 with 17:30 left, when she again navigated through defenders before putting her second goal of the game into the left side.

Then in the closing minutes, McKenna Pritchett sent a direct kick over a wall of Vikings. Kerr made a leaping stop that caromed off the underside of the crossbar and in front of the goal line, where Anissa Wallace tapped in the game’s final goal.

“I think we’re a strong team,” said Pennington, whose team closes the season with two games against North Caroline and one with Queen Anne’s. “I think we have some momentum going forward and we’re in a good place.”