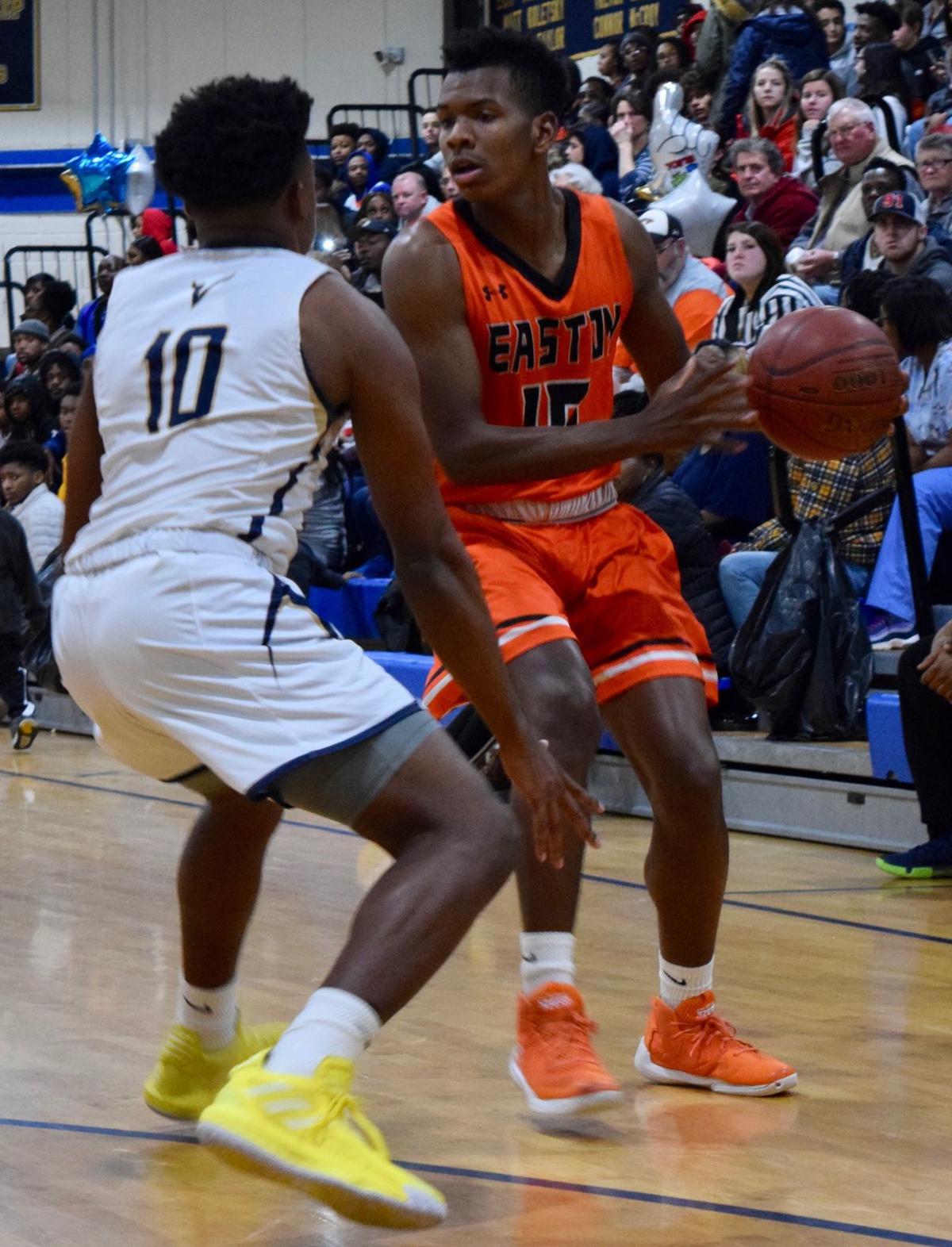 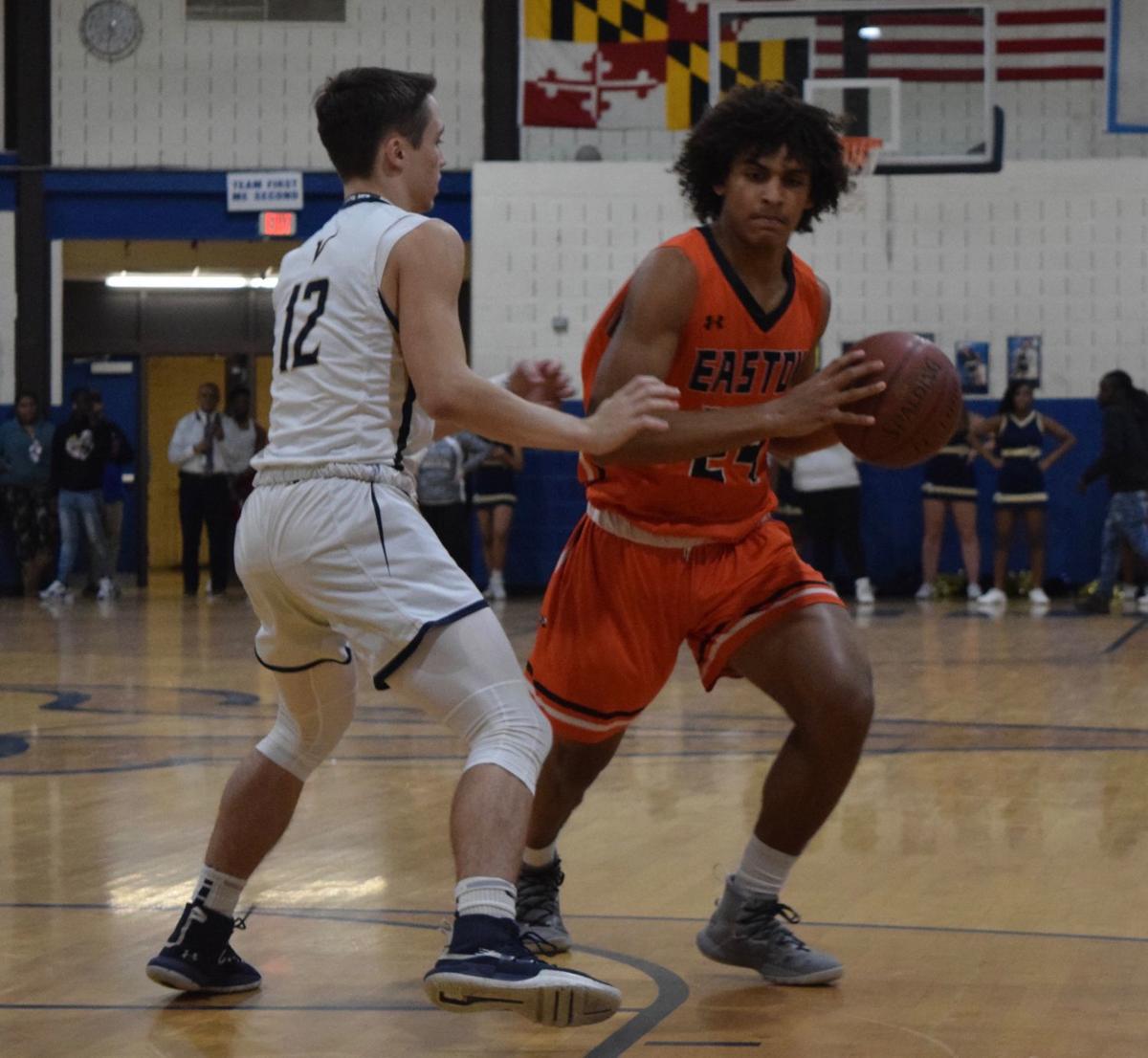 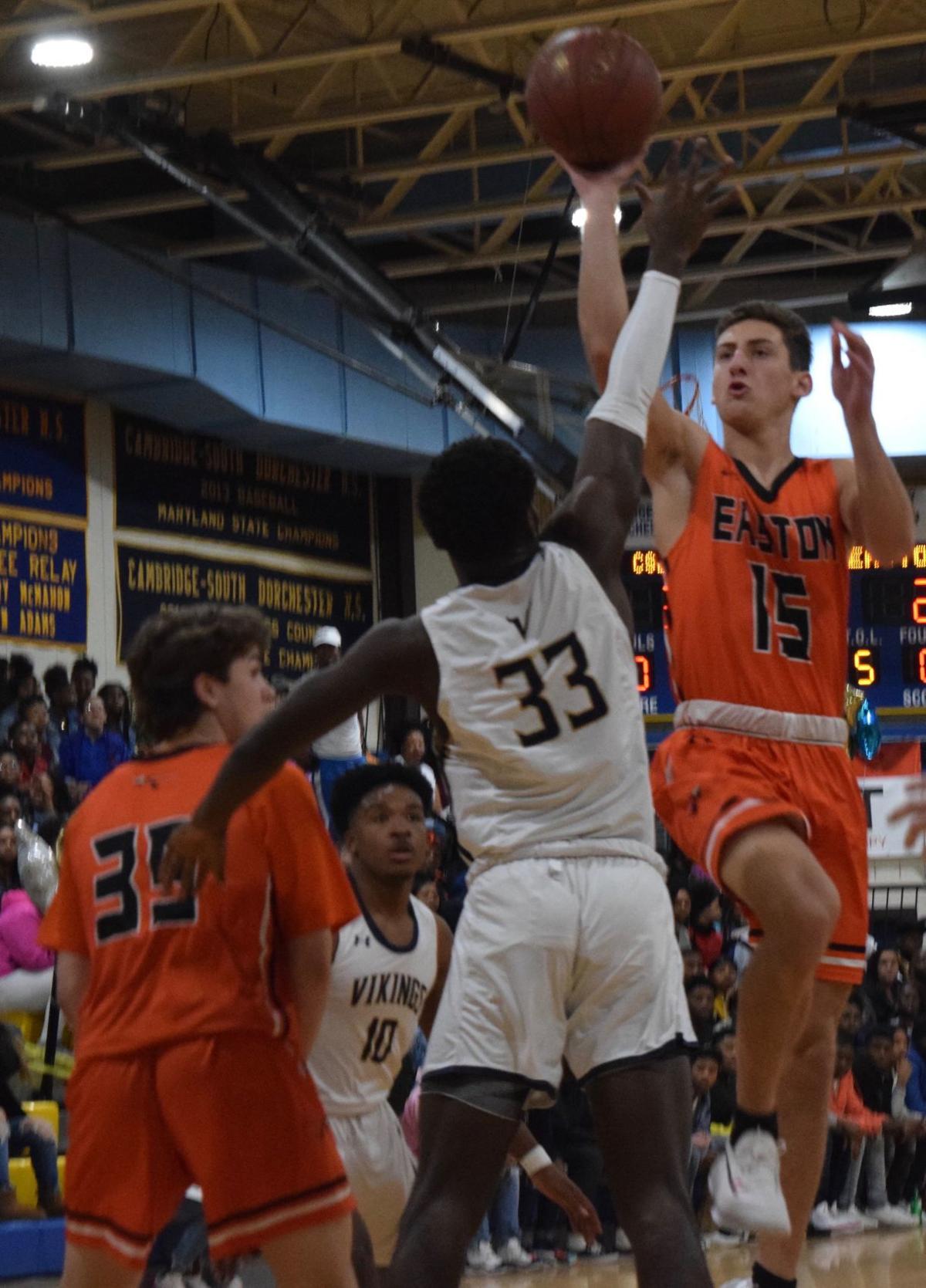 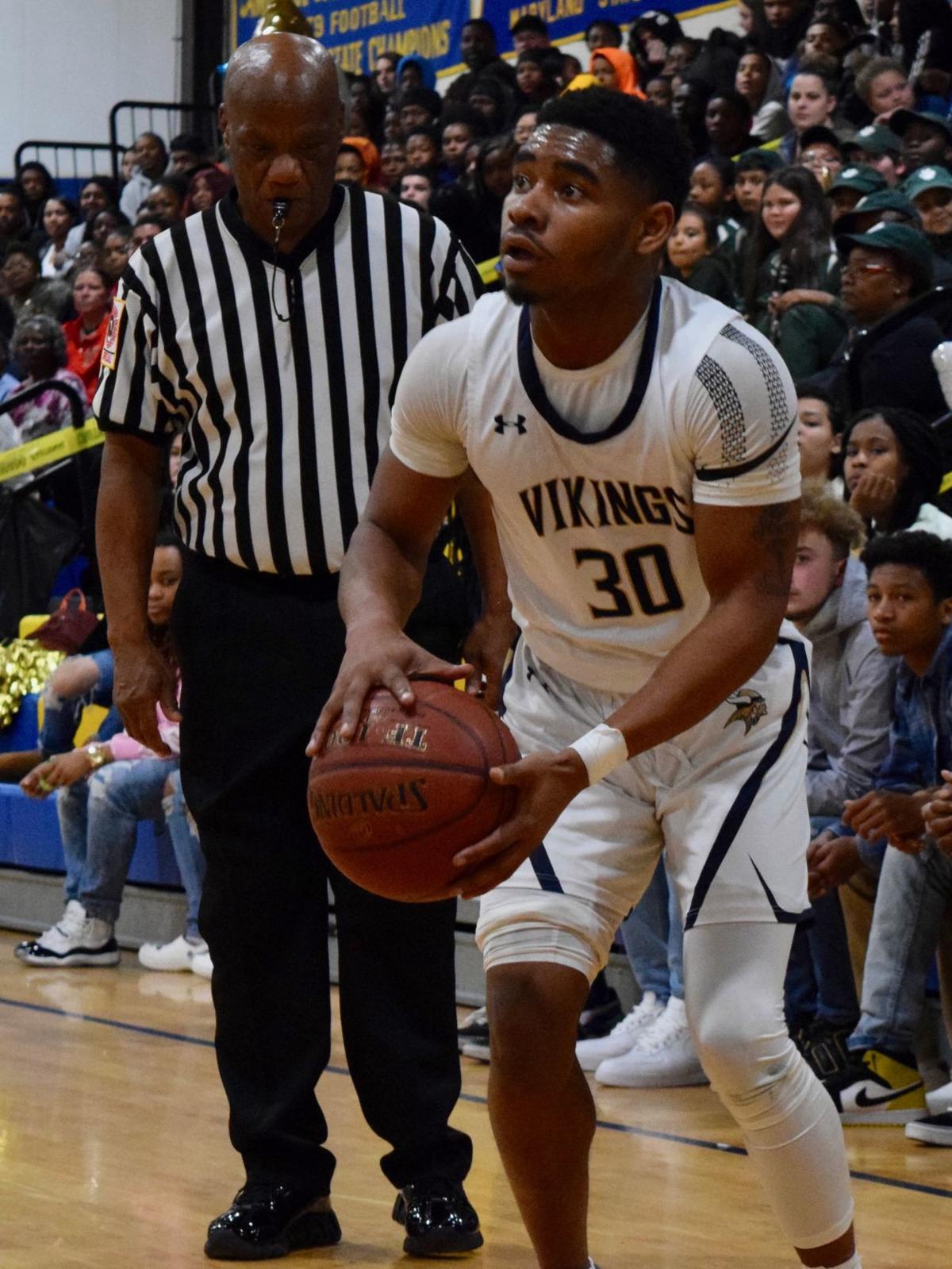 Cambridge-SD’s Khalik Beasley prepares to shoot during the Vikings’ win over Easton on Thursday evening in Cambridge. 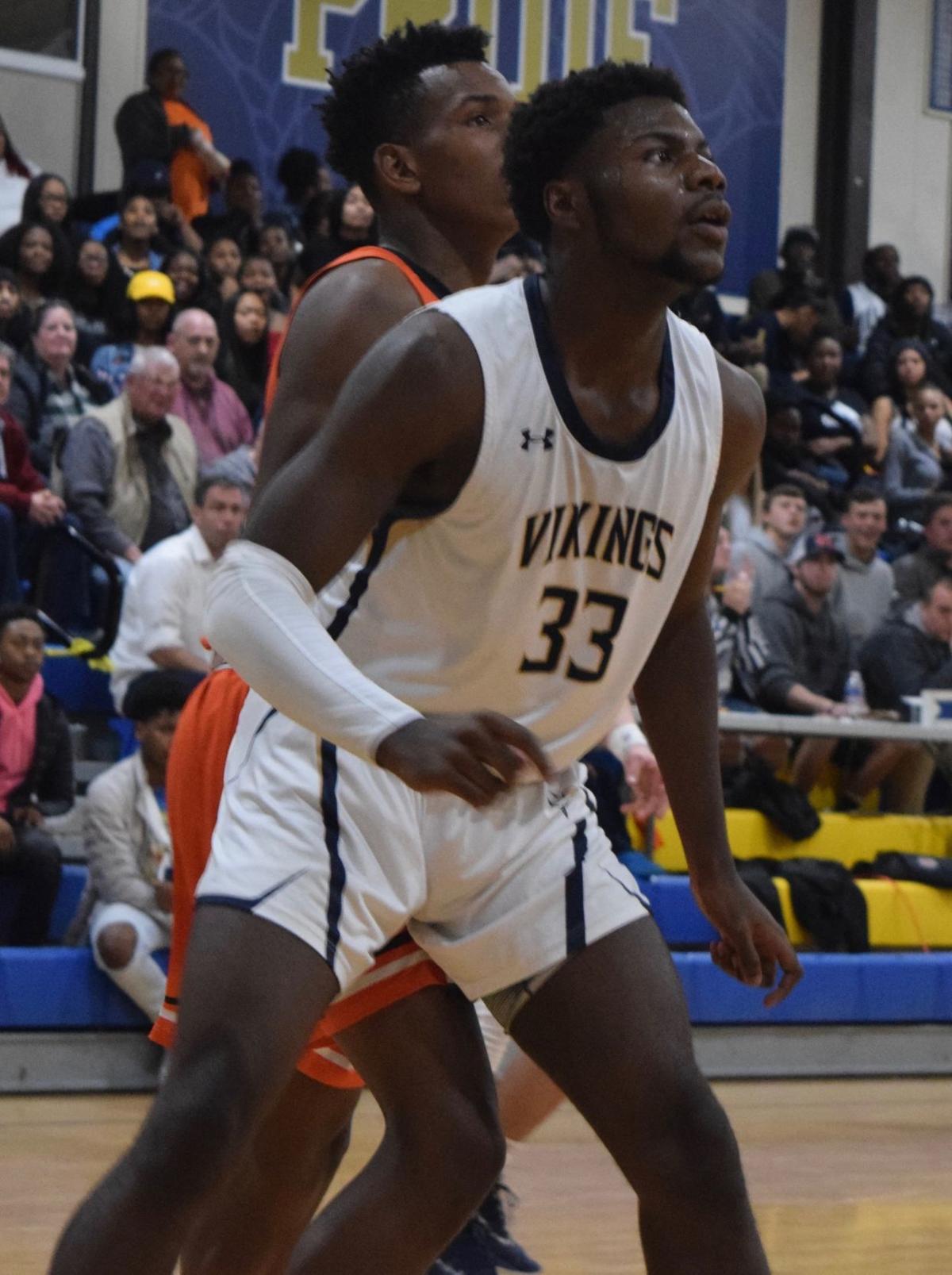 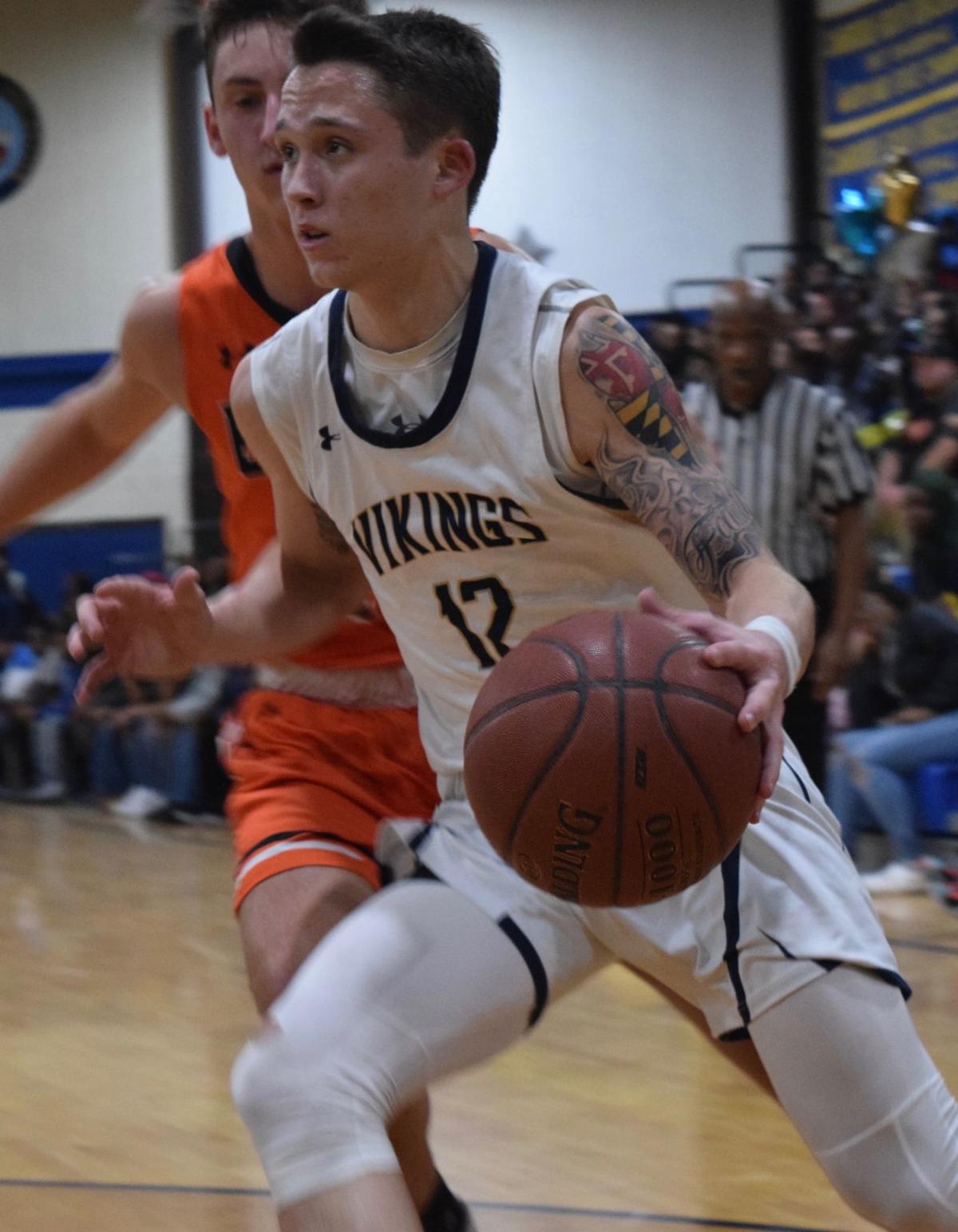 Cambridge-South Dorchester High’s Logan Middleton drives to the hoop against Easton on Thursday in Cambridge. 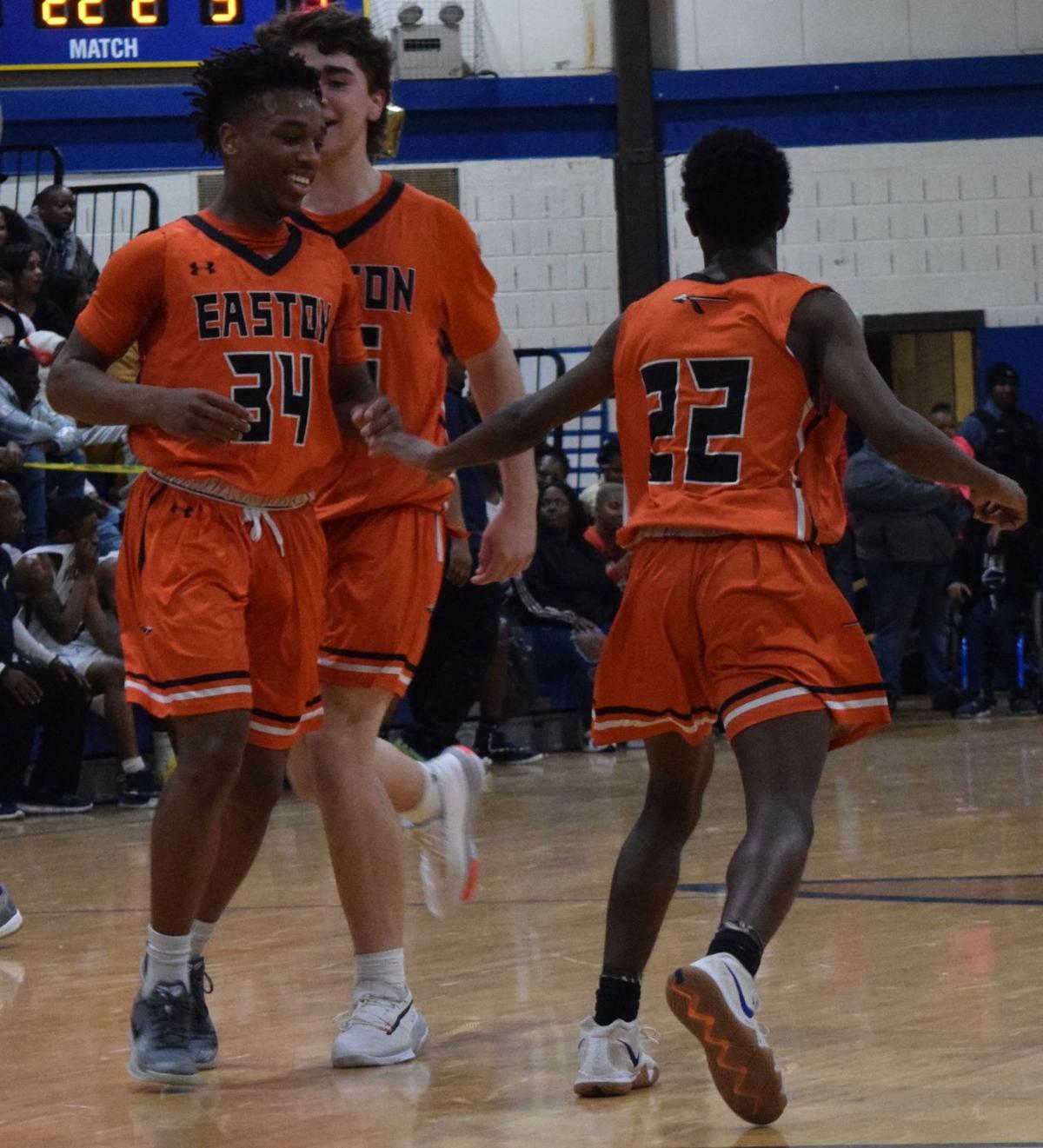 Easton’s Shawn Warner (left) smiles after hitting a 3-pointer against Cambridge-SD on Thursday in Cambridge. 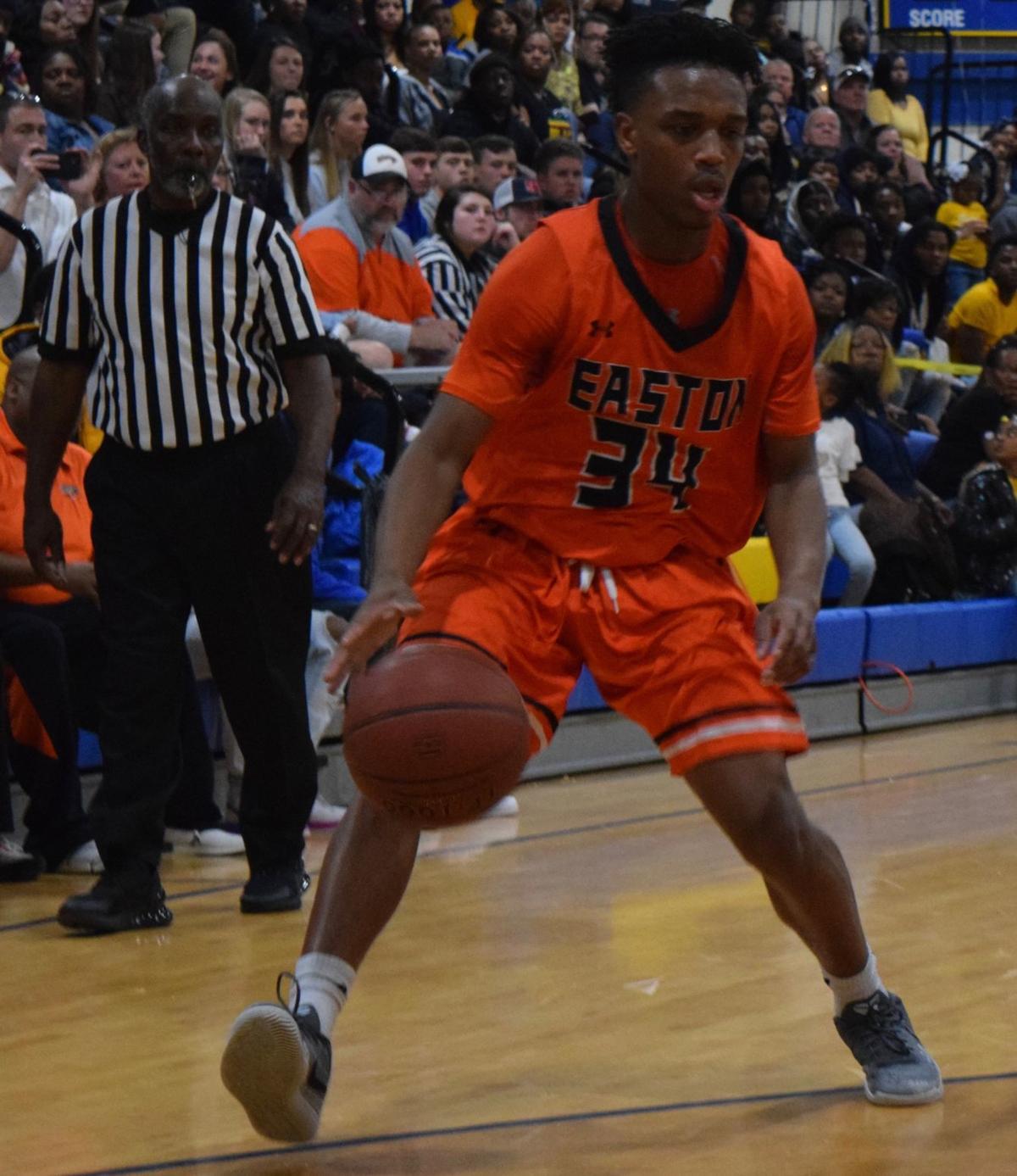 Easton’s Shawn Warner controls the ball against Cambridge-SD on Thursday in Cambridge. 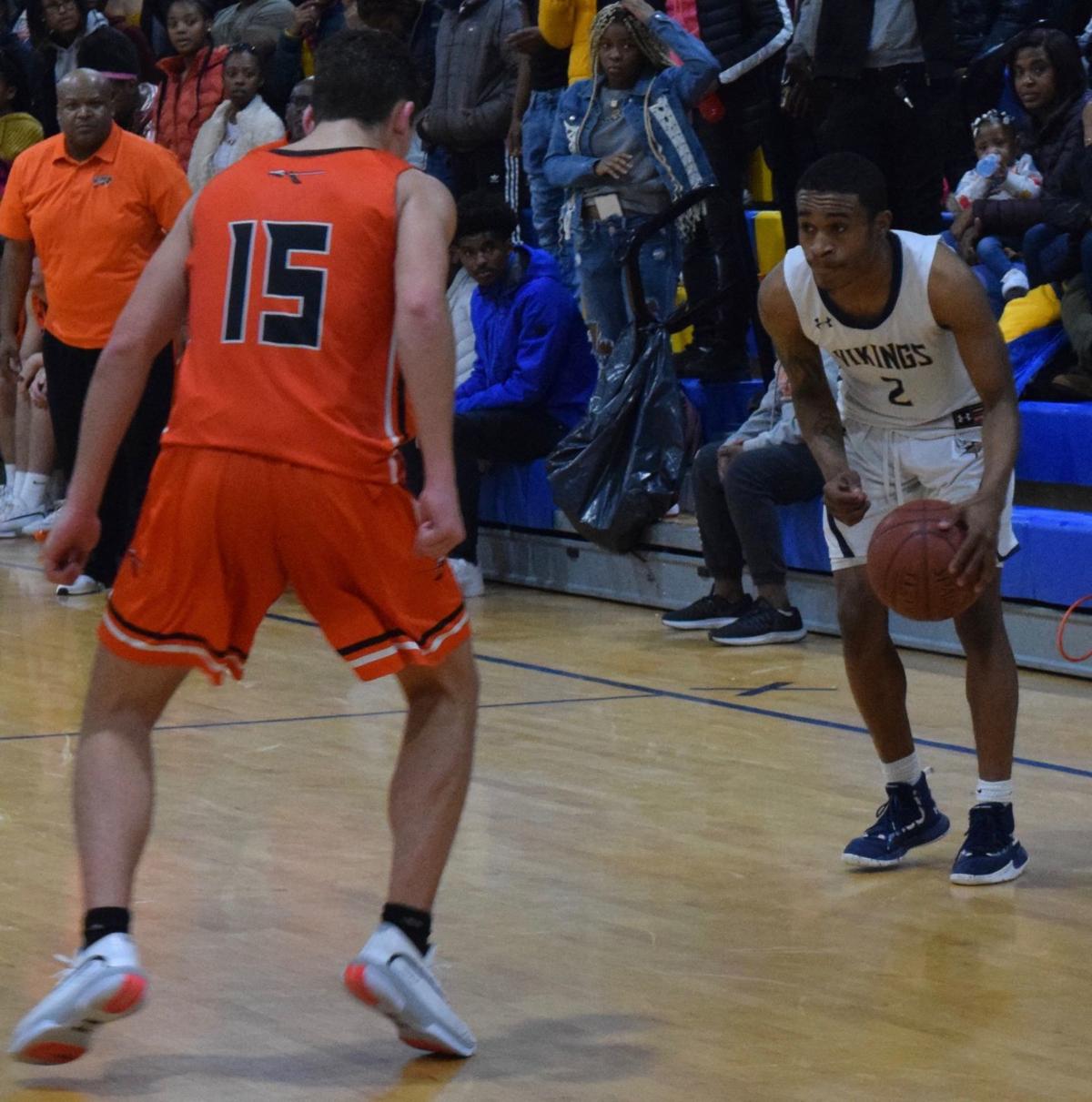 Cambridge-SD’s Khalik Beasley prepares to shoot during the Vikings’ win over Easton on Thursday evening in Cambridge.

Cambridge-South Dorchester High’s Logan Middleton drives to the hoop against Easton on Thursday in Cambridge.

Easton’s Shawn Warner (left) smiles after hitting a 3-pointer against Cambridge-SD on Thursday in Cambridge.

Easton’s Shawn Warner controls the ball against Cambridge-SD on Thursday in Cambridge.

CAMBRIDGE — Cambridge-South Dorchester led Easton by 58-53 with 10 seconds left in regulation. The North Bayside title was on the line for the Vikings on senior night against their rival, and they were tantalizingly close.

But chaos ensued. Warriors junior forward Ryan O’Connor hit a 3, C-SD threw the ball away on the inbounds pass, and Easton head coach Dionte Hynson drew up a play to free up senior guard Da’Qwan Johnson for a wide-open game-tying layup. The game went to overtime.

However, Cambridge prevailed in the extra period, putting the game away at the free-throw line. The Vikings’ 73-65 overtime win gave them their first North Bayside championship since 2016. They also clinched home-court advantage in the playoffs in Class 1A East Region 2.

Cambridge-SD (17-3, 13-3 North Bayside) has pulled out many narrow victories this season, and that experience paid dividends. The Vikings weren’t nervous entering overtime.

“It prepared us for this moment,” C-SD senior guard Logan Middleton said. “We never really had that blowout all year. So we’ve always been in four or five-point games. Those games every year have really helped us for this moment and it’s going to carry into the playoffs, too.”

C-SD head coach Marty Bailey Jr. beamed with pride for his team after the victory, but for him, this moment was especially personal. Bailey coached at Easton for eight years, and played for the Warriors in high school. Many of his staff from his Easton tenure remained with the Warriors.

He spoke with those assistant coaches many times over the last few days leading into the game. The sides are very familiar with each other. So the rivalry and the North title takes on new, added meaning for Bailey.

“You don’t know how weird this is. At all,” Bailey said. “I never thought I would even be coaching here. And to do it in my second year ... I guess it’ll sink in. I’m going to enjoy it. But it still feels surreal right now. Like I’m at another school, and we just won against my older school, my alma mater, and we won the division.”

Despite the close personal ties, Bailey was focused on his kids. He knew how special this was, especially for his seniors, who went out on top on their senior night.

“It’s super cool,” Bailey said. “They’re never going to forget this. This meant a lot. We’re going to have home-court advantage now, home court for the playoffs. We won the division, all that happened in one night. The seniors got a good salute. It’s a big night.”

Junior forward Vejon Ashley led the Vikings with 26 points. His performance was critically important, as senior guard Dajawan Jackson sat for most of the game with an ankle injury suffered last week, and C-SD’s 3-point shooters struggled to find a rhythm.

So Ashley stepped in and went into takeover mode for much of the second half. He made clutch play after clutch play for the Vikings all game, but particularly down the stretch.

Ashley has taken his play to another level over the past few weeks. Bailey said the junior showed a senior mentality in doing so.

“I think (his improvements came) just because (we’re) low on numbers,” Bailey said. “Every team’s banged up. We never know who’s going to be at practice, who’s going to be at the games. And he took it upon himself to say ‘Alright, I’m going to give that extra effort.’ And he’s doing a great job.”

Middleton added 14 points for C-SD. The victory meant a lot for him on his senior night.

“I’ve been dreaming of this since the ninth grade,” Middleton said. “I try to set things high for myself, so winning the North really touches my heart, especially beating people we grew up playing. It feels good to accomplish something that we’ve all been dreaming of since we were younger.”

Easton (9-11, 6-10) gave the North champs all they could handle. The game was tight the entire way, and the Warriors led at the end of the first and third quarters.

Hynson was proud of his team’s effort and is hoping it gives them momentum going into the playoffs.

“They showed me a lot tonight,” Hynson said. “They fought all the way to the end. Like I told them, ‘The regular season’s over, and you all fought hard. Fought hard until the last play. Now it’s playoff time, everybody’s 0-0. Let’s keep the same fight and energy, and go to the playoffs with it.’”

The Vikings will face undefeated South Bayside champ Wicomico on Tuesday at the Wicomico Youth & Civic Center in the Bayside Championship game.