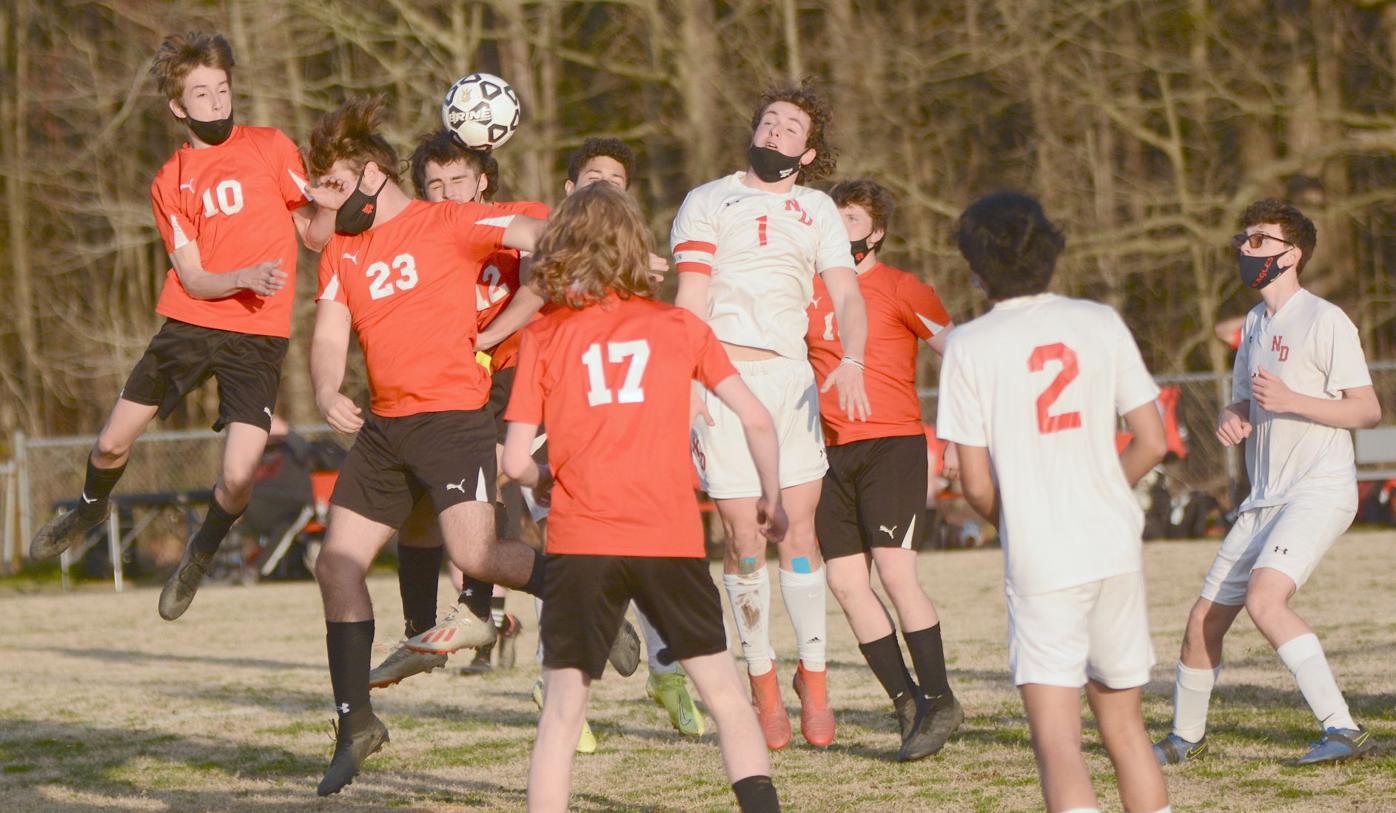 St. Michaels’ Joey Coale (10), Chandler Dyott (23), Alex Batley (12) and North Dorchester’s Devin Lord go airborne in hopes of getting a head on the ball during the closing minutes of Monday’s game. 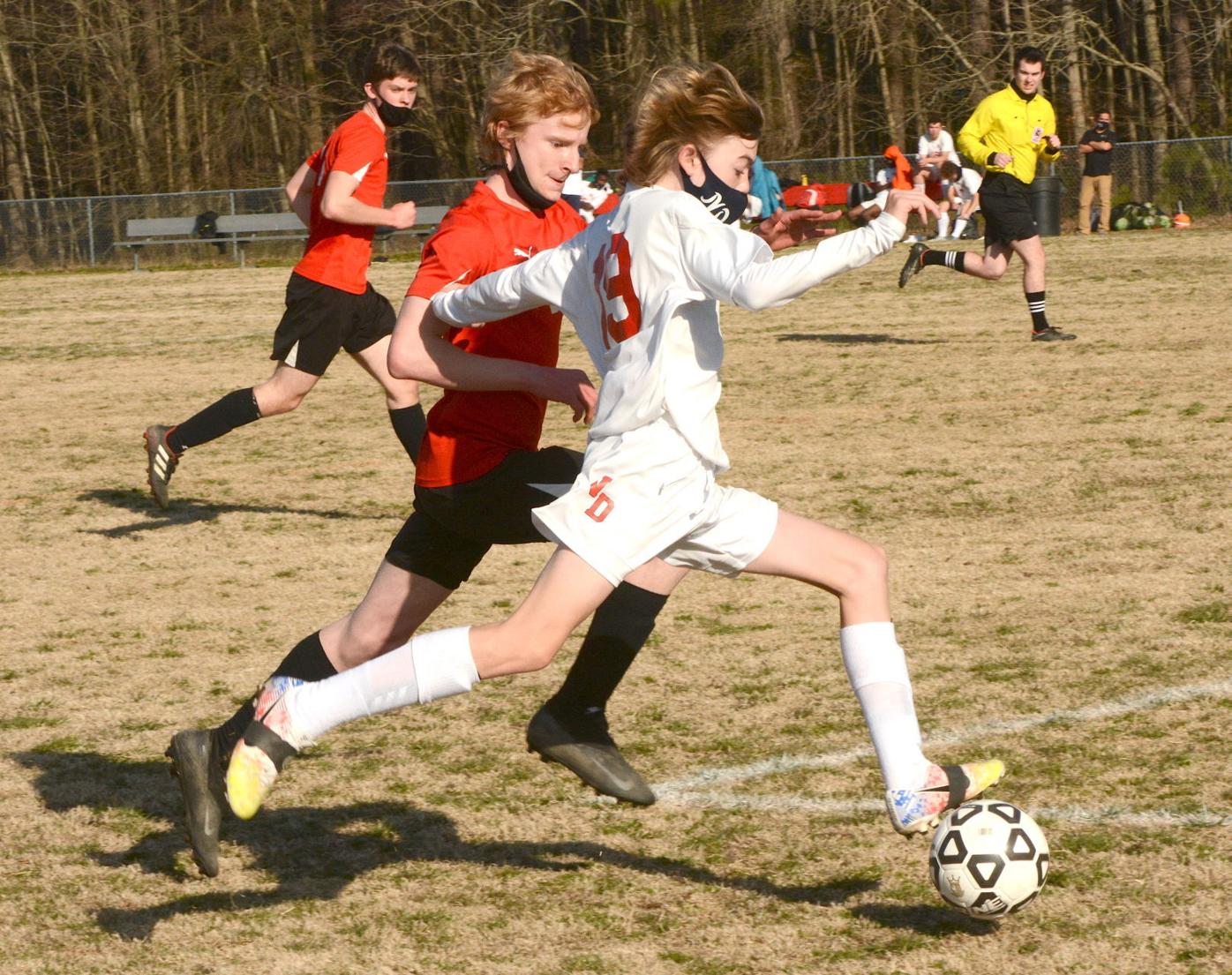 North Dorchester’s Brayden Messick (19) pushes toward the goal with St. Michaels’ Cooper Baum on his back during Monday’s first half. 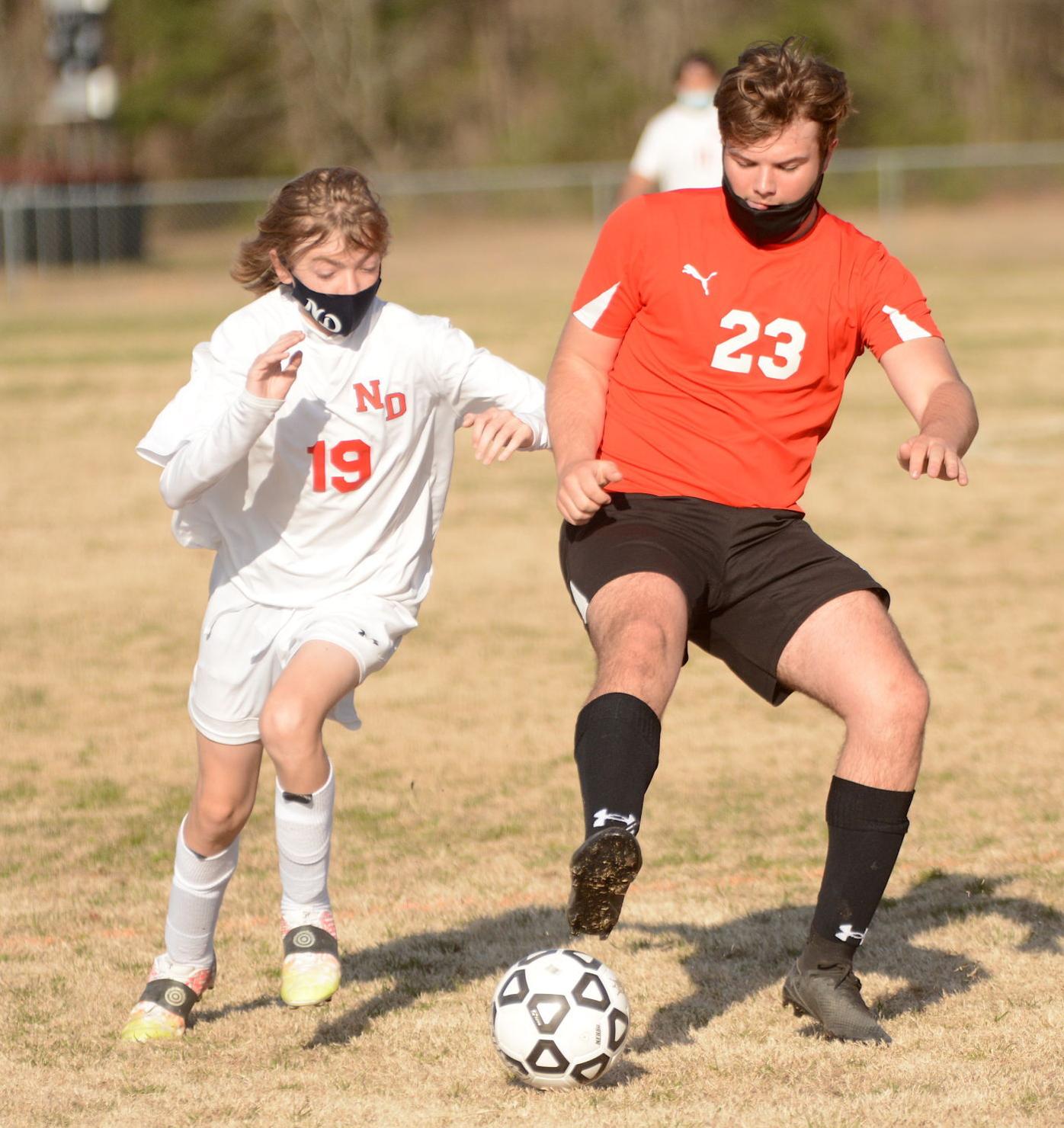 St. Michaels’ Joey Coale (10), Chandler Dyott (23), Alex Batley (12) and North Dorchester’s Devin Lord go airborne in hopes of getting a head on the ball during the closing minutes of Monday’s game.

North Dorchester’s Brayden Messick (19) pushes toward the goal with St. Michaels’ Cooper Baum on his back during Monday’s first half.

The Saints hadn’t even held a lead through four games.

That changed 4 minutes, 28 seconds into the second half Monday, as Matt Gostomski squeezed a direct kick into the upper right corner of the goal, then watched his teammates tack on two more scores as St. Michaels notched its first victory of the season with a 3-1 win over North Dorchester.

“We know how to play the game,” St. Michaels head coach Pat Hambleton said. “And I have argued with the coaches, this is one of the better offensive teams, because of the amount of opportunities that they can create, that I’ve had in maybe the past three or four years.

“But we haven’t been able to find consistency in the most important areas,” Hambleton continued. “Mishits at the 18. Mishits at the 6. Freezing. That’s what’s getting us. I think we’re a decent team. We finally showed it tonight. Now consistency is the question.”

Another big hump the Saints (1-4) finally scaled was not getting behind early.

“Right away, puts you down a category right off the jump,” Hambleton said of playing from behind. “No matter what kids say, or coaches say, a goal down automatically drops (your confidence level), especially a team that’s not going to blow out anybody.”

Ten days after the Eagles defeated St. Michaels 4-2 on their home field, the two teams were scoreless heading into halftime.

Gostomski finally gave the Saints their first lead of the year, when struck a direct kick from about 25 yards out. The junior watched his arcing floater drift from left wing, elude the reach of Eagles Kaden H’Andte and nestle just inside the left post for a 1-0 lead.

“That was huge,” Gostomski said. “I was looking for Owen Baum to make a header and coach told me to put it on goal and that’s what I did and got a little lucky. I think it sparked something and really put something into everybody’s head that we can beat that team.”

The Saints sure played that way, and continued pressuring the North Dorchester end. Two minutes after taking the lead, Alex Batley sent a left-footed roller that bounded wide left.

Then with 23:14 remaining, Carter Kelly got just enough of his head on a throw-in to get the ball past H’Andte for a 2-0 lead.

“In the time of play we are not a bad team,” Hambleton said. “We know how to play the game. We just haven’t put 80 minutes together.”

A little more than five minutes later, North Dorchester was called for a handball in the box, setting up a penalty kick for Baum, who parked a low, hard roller just to the left of the diving H’Andte for a 3-0 bulge.

North Dorchester avoided the shutout with 8:25 remaining when Connor Bennett took a cross from left wing and steered a shot back into the right corner for a 3-1 deficit.

“We worked really hard in practice,” Gostomski said. “Communication was a lot better. We played the game how we should and learned from our mistakes in prior games.”

RIDGELY — Nate Sharp scored goals off assists from Owen Rorabaugh and Bryan Reyna Lopez as the Bulldogs improved to 2-0.