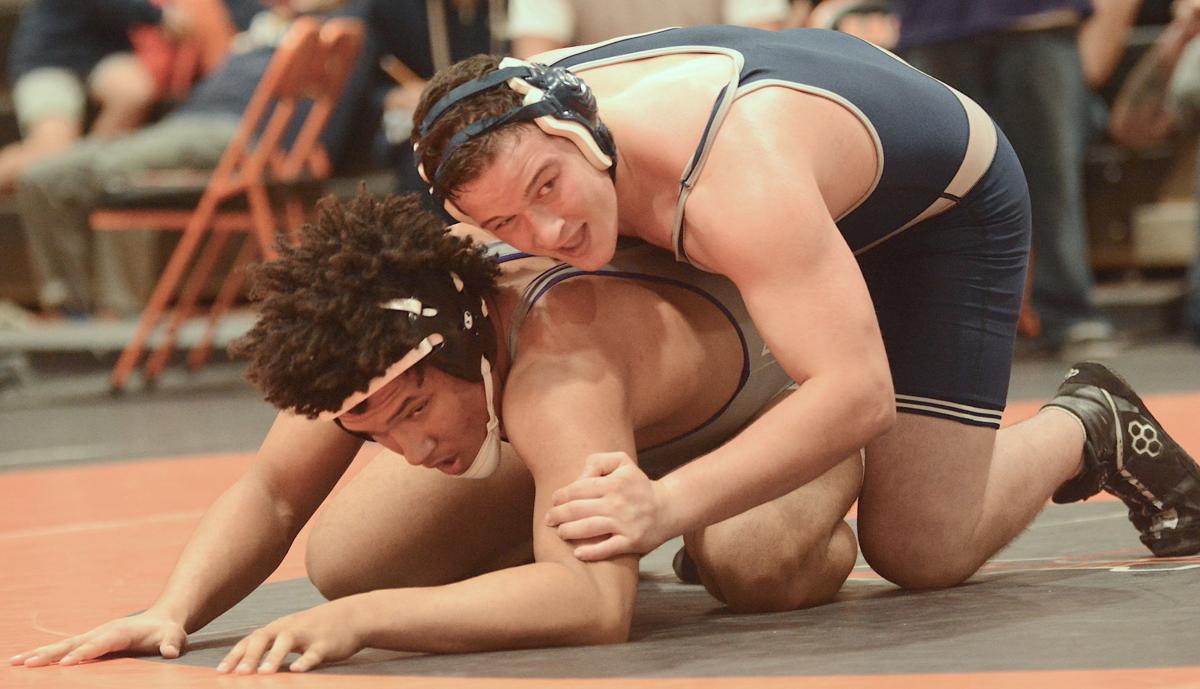 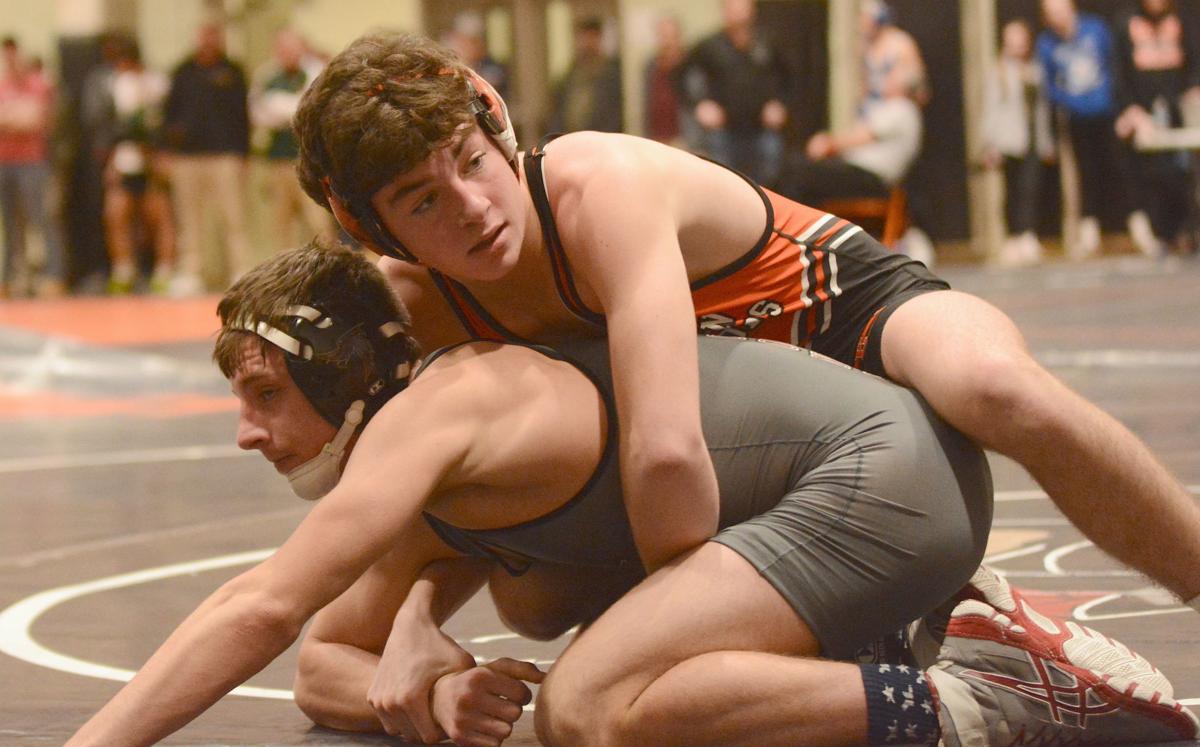 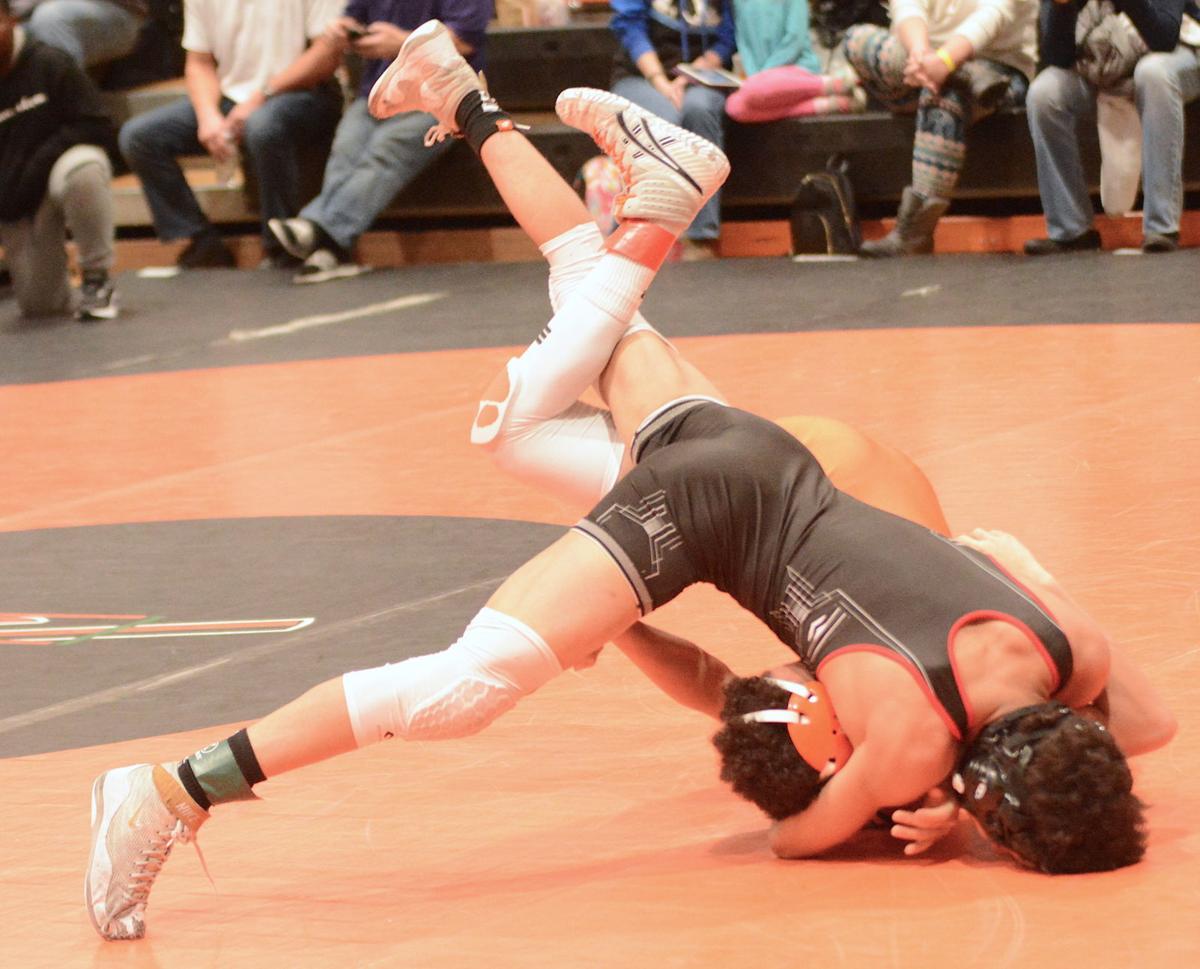 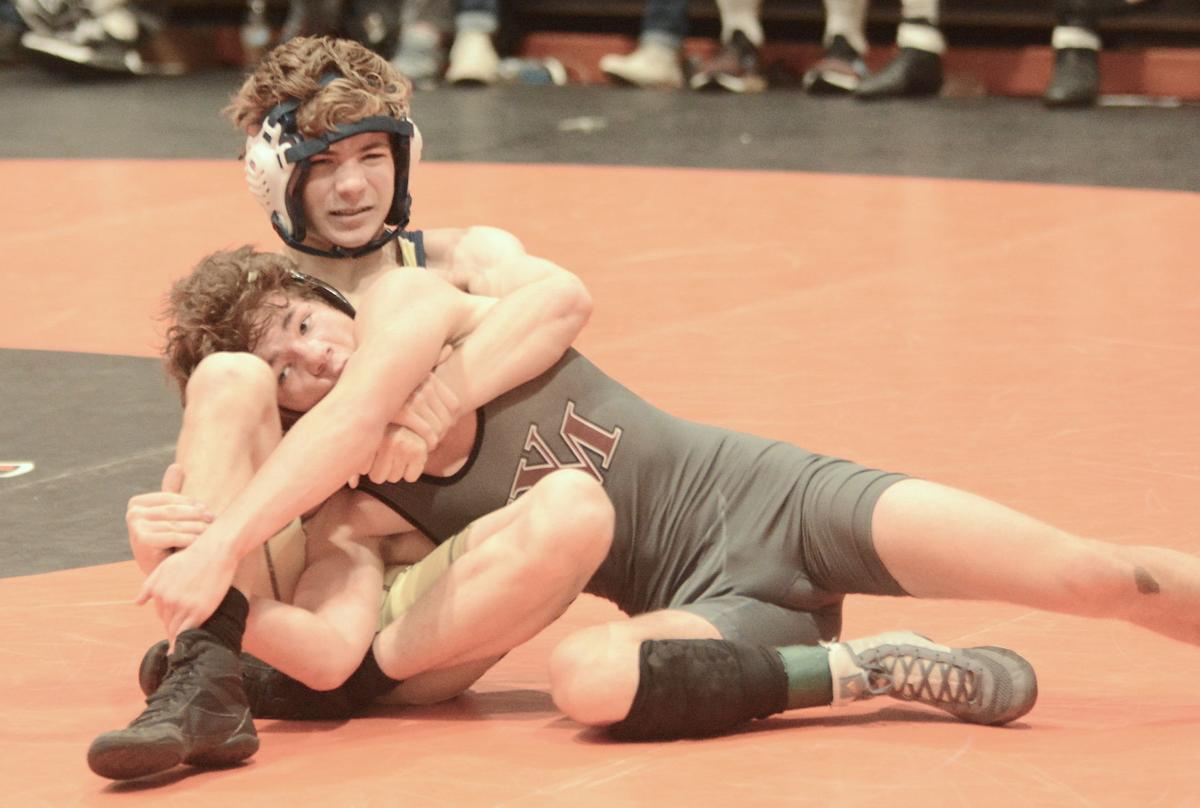 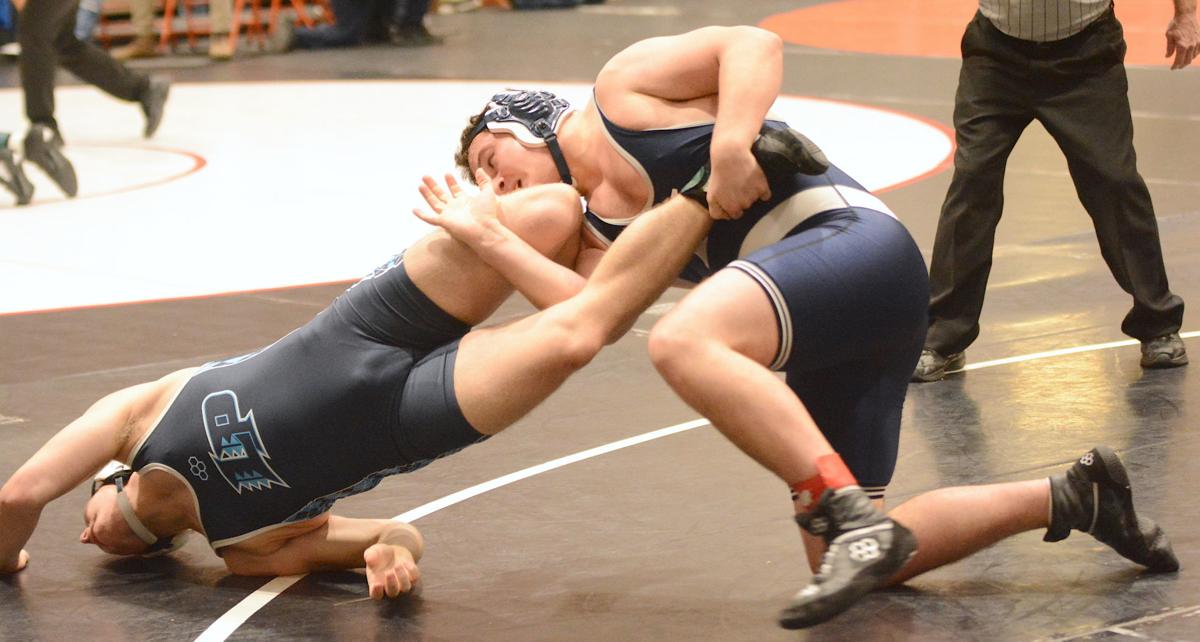 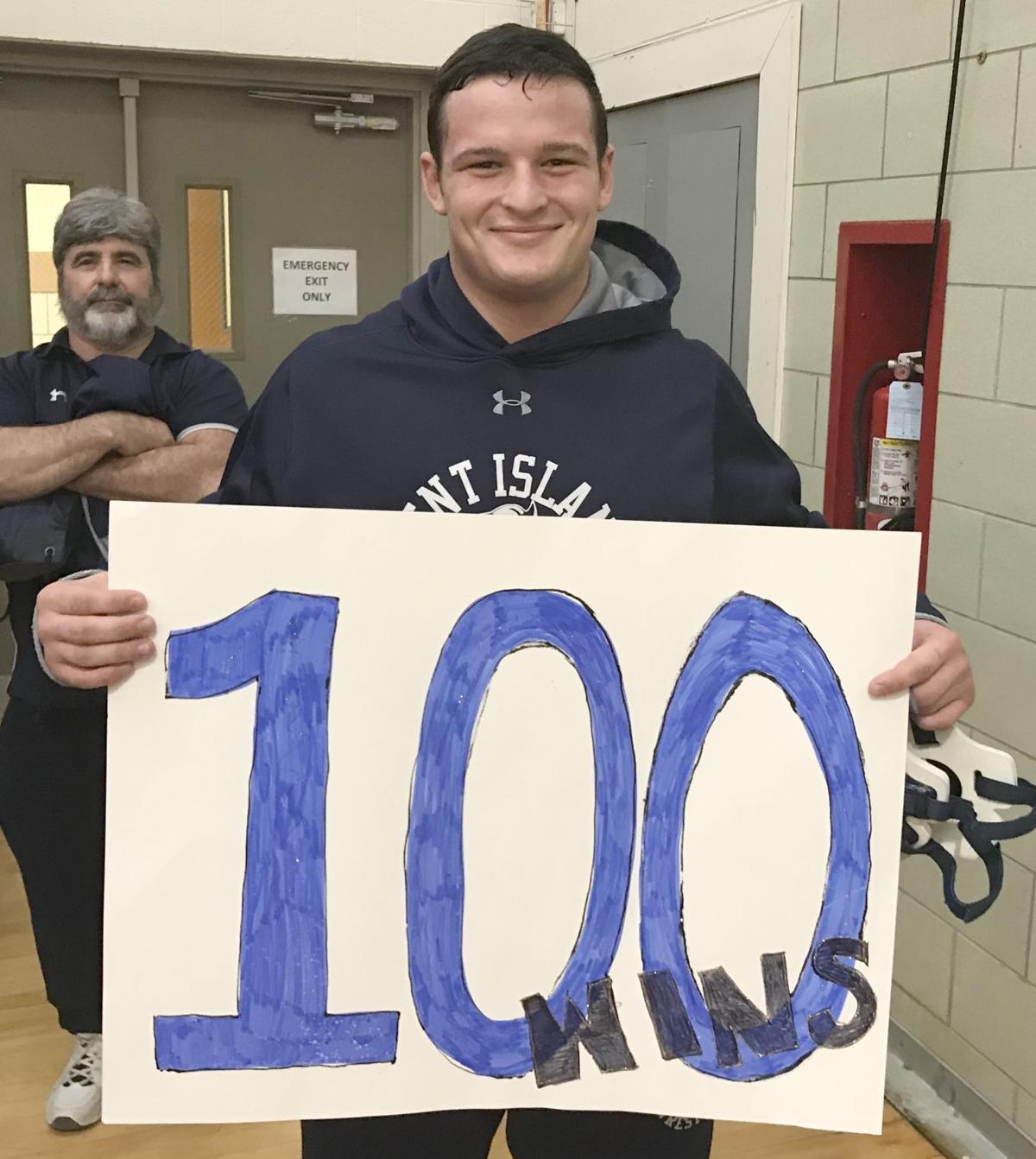 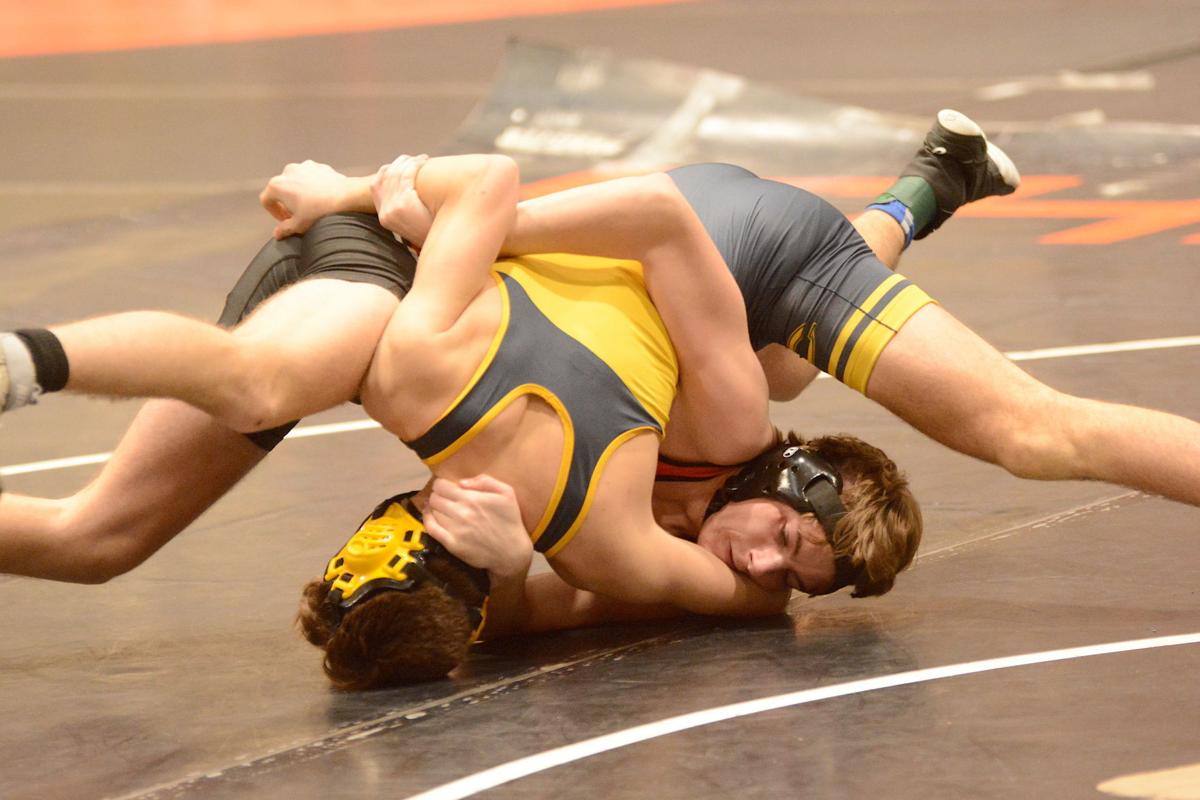 Easton’s E.J. Milhollan, right, and Catonsville’s Eric Grap get tangled during their 147-pound bout during Saturday’s New Year’s Brawl tournament. Grap finished third in the tournament, while Milhollan was fifth. 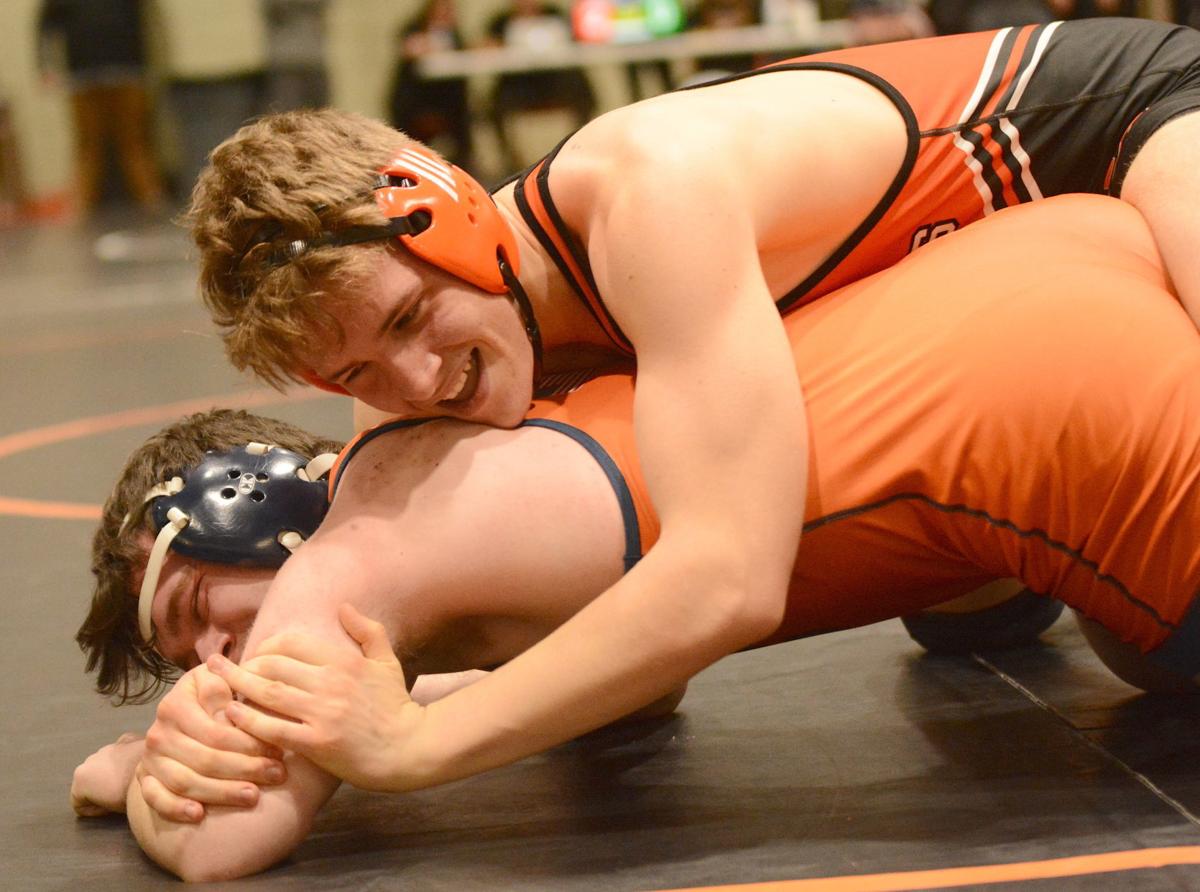 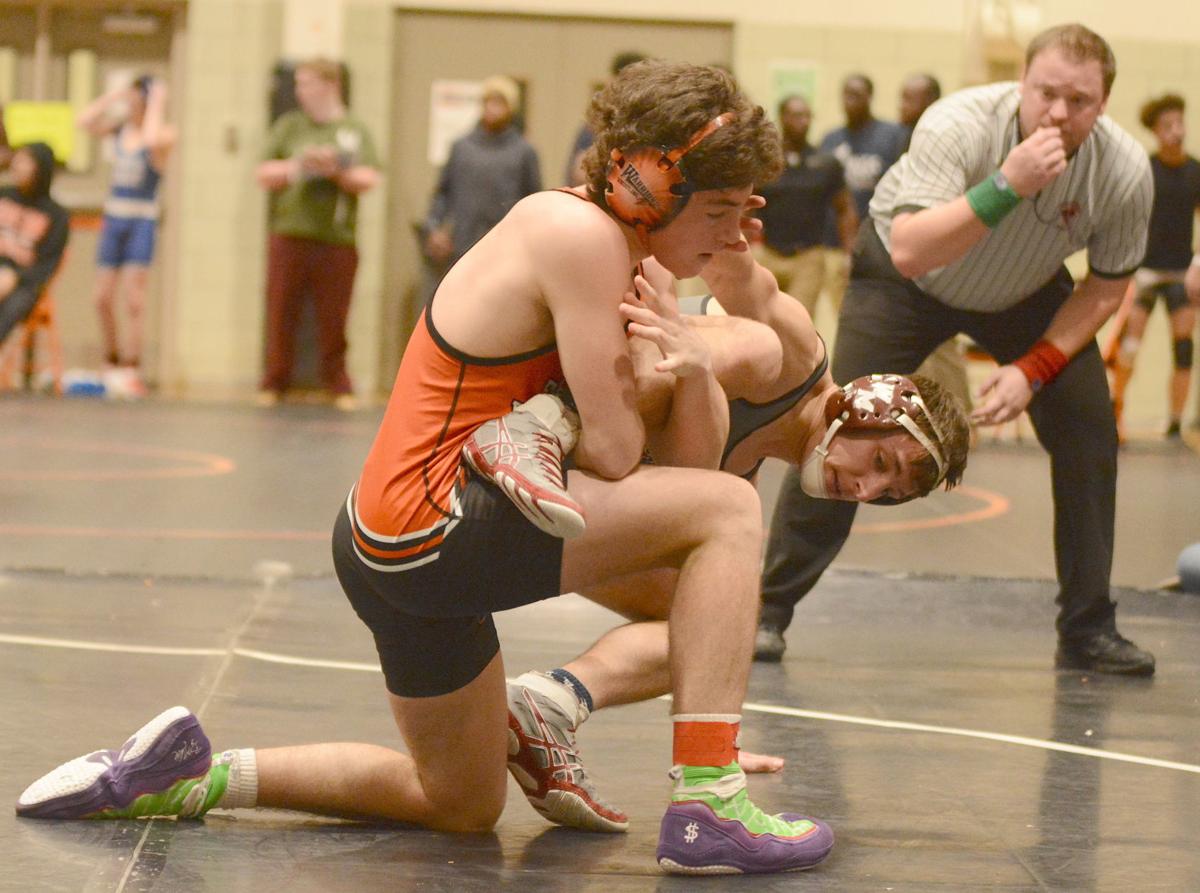 Easton’s Maximus Bentley, left, catches the leg of Winters Mill’s Colby Unkart during their 140-pound bout at Saturday’s New Year’s Brawl tournament. Bentley won a 10-2 decision to complete a 7-0 run through the tournament.

Easton’s E.J. Milhollan, right, and Catonsville’s Eric Grap get tangled during their 147-pound bout during Saturday’s New Year’s Brawl tournament. Grap finished third in the tournament, while Milhollan was fifth.

Easton’s Maximus Bentley, left, catches the leg of Winters Mill’s Colby Unkart during their 140-pound bout at Saturday’s New Year’s Brawl tournament. Bentley won a 10-2 decision to complete a 7-0 run through the tournament.

“There’s a wall and everyone that’s got 100 wins has their own little banner,” Blanchard said. “I remember walking in with my mom and I said, ‘Hey, I’m going to make it up on that 100 wins (wall) by my senior year.’”

“Being able to fulfill that; that was my first goal,” Blanchard said of reaching the 100-win mark. “I’m just really glad I got to complete it.”

Blanchard (19-0) then got to complete his unbeaten run through the tournament when he squared off against Kalambihis in a battle of unbeatens in the 222-pound final. Blanchard, who defeated Kalambihis at last year’s New Year’s Brawl and state tournament, but lost to him in the 2A-1A East Region final, was taken down but escaped to trail 2-1 after the first period in the latest installment of this rivalry.

Starting the second period on bottom, Blanchard hit a quick reversal in the opening 10 seconds to go ahead 3-2, watched Kalambihis score a reverse to regain the lead at 4-3, then escaped a second time to forge a 4-4 tie heading into the final period.

On top to open the third, Blanchard worked a tilt for three back-points and a 7-4 lead 15 seconds into the period. Kalambihis shaved his deficit to 7-5 with an escape, then took a shot that was foiled by Blanchard, who stuffed the attempt and quickly spun behind his opponent for a takedown and a 9-5 lead. Blanchard added three more back-points off a restart with 42 seconds remaining to deal Kalambihis (16-1) his first loss of the season.

“I knew that I needed to get him to his back somehow, ‘cause I knew that’s how I’d get my points, because he’s really strong up top,” Blanchard said. “So I tried my best just to hold him down. I found that his right knee was really weak, so I grabbed that and pulled it, and when I pulled it he broke down to his base. I tried to sit it out because I thought that was the perfect opportunity to just try to chin in back or something. So I strapped my arm around him and held him down.”

It was one of the few times this season, Blanchard has wrestled a full six-minute match.

“Hadyn, we were hoping it was going to be him and Kalambihis,” Kent Island head coach Tommy Sitar said. “Obviously you’re hoping he can win, but I told Hadyn and some others this; ultimately your goal isn’t to win the New Year’s Brawl. So no matter what happens, I’m not going to be displeased with whatever the result is. As long as you learn from it and we can turn that into something we can work on in the practice room, we’ll be all right.

“We’re going to see him again at regionals, and maybe again at states,” Sitar said of Kalambihis. “So he (Blanchard) just needs to know that he’s going to be coming for him and constantly improving himself.”

“Hooks had a great tournament,” Sitar said. “He’s really improving. It’s cool to see from week to week his improvement. And Randy, he kept improving this week as well. It was good to see him achieve what he could and earning that first place.”

After suffering injuries in this tournament the past two years, Easton senior Maximus Bentley (12-0) won his first New Year’s Brawl championship, taking the 140-pound title with four pinfalls, a forfeit, and two major decisions, in which his opponents, despite not being called for stalling, did little on bottom while the defending state champ worked on top.

“It was really frustrating,” said Bentley, who did not have a finals match. “It sucked I couldn’t wrestle in the finals; there was only seven kids in my bracket. I wish there was better competition for me. But it is what it is. I’ll go back to practice and practice hard.”

Cambridge-South Dorchester’s Dazheem Emory (115) and David Willis (122) each took runner-up honors. The 115-pound final between Emory and Winters Mill’s Dell was stopped less than 30 seconds into the match. Both wrestlers were hit with 1-point penalties, before the official ruled Dell the winner by forfeit. Willis lost 11-7 to Winters Mill’s Vagnier in the 122-pound final.