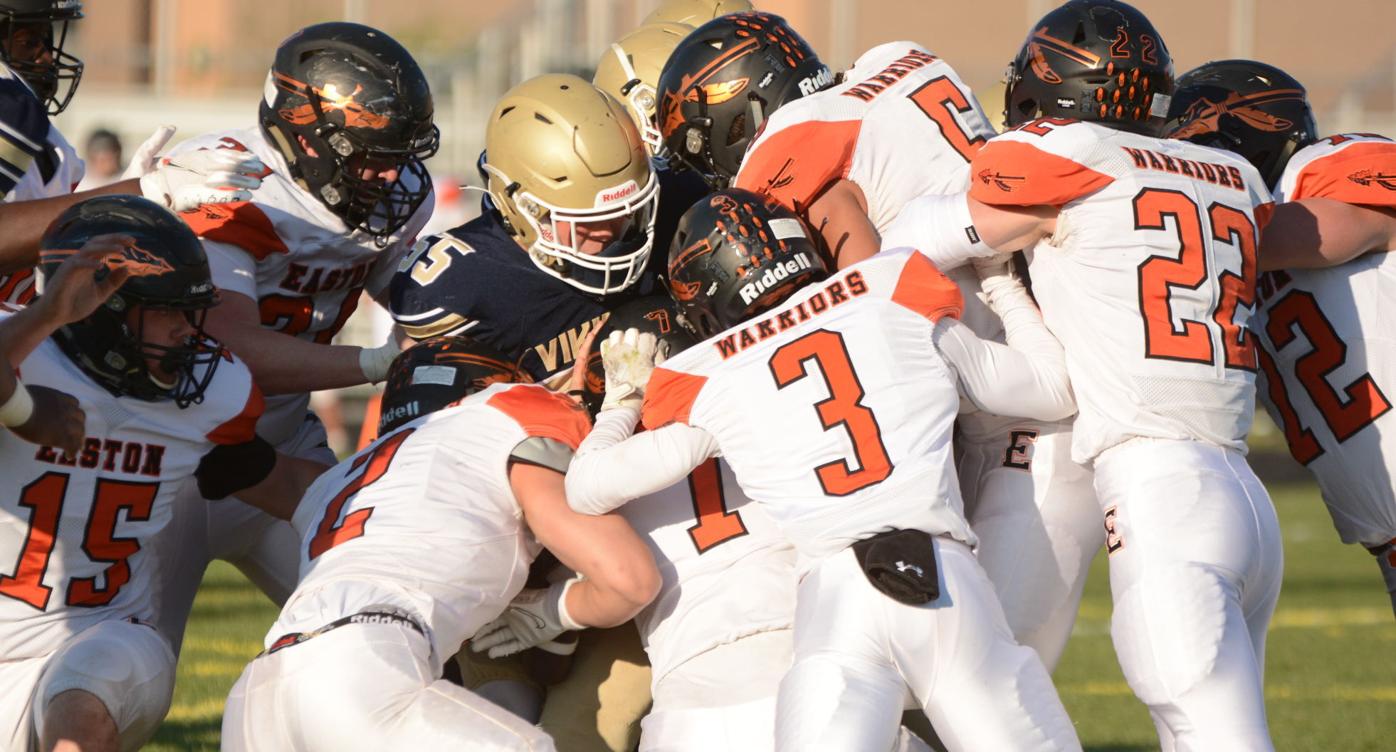 Cambridge-SD offensive lineman Logan Dukes (55) gets caught in the middle as Easton’s defense swarms over running back Tim Johnson during Friday’s first half. 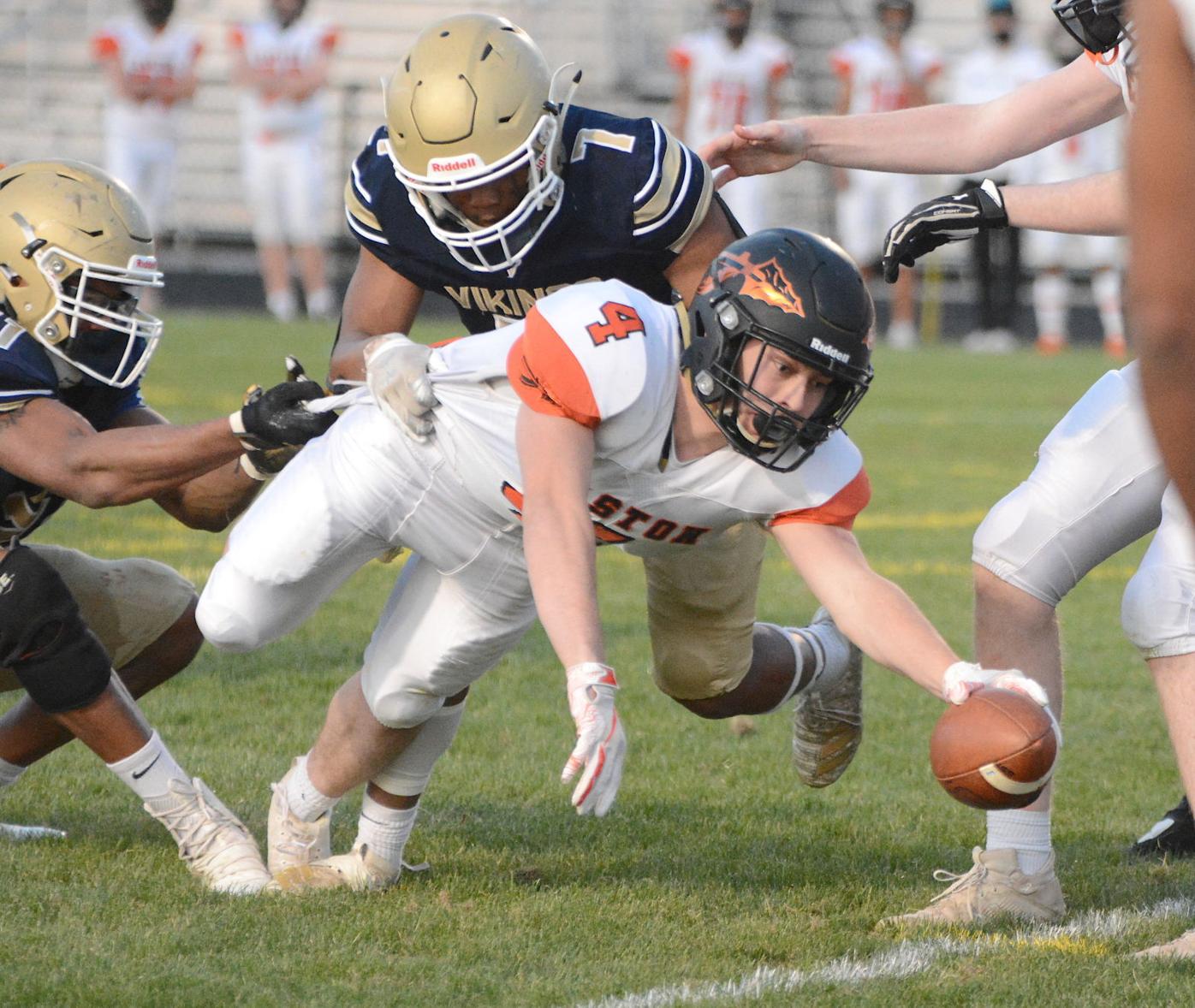 Easton running back Graham Haddaway (4) reaches the ball over the goal line for a 1-yard touchdown run during Friday’s third quarter against Cambridge-SD. 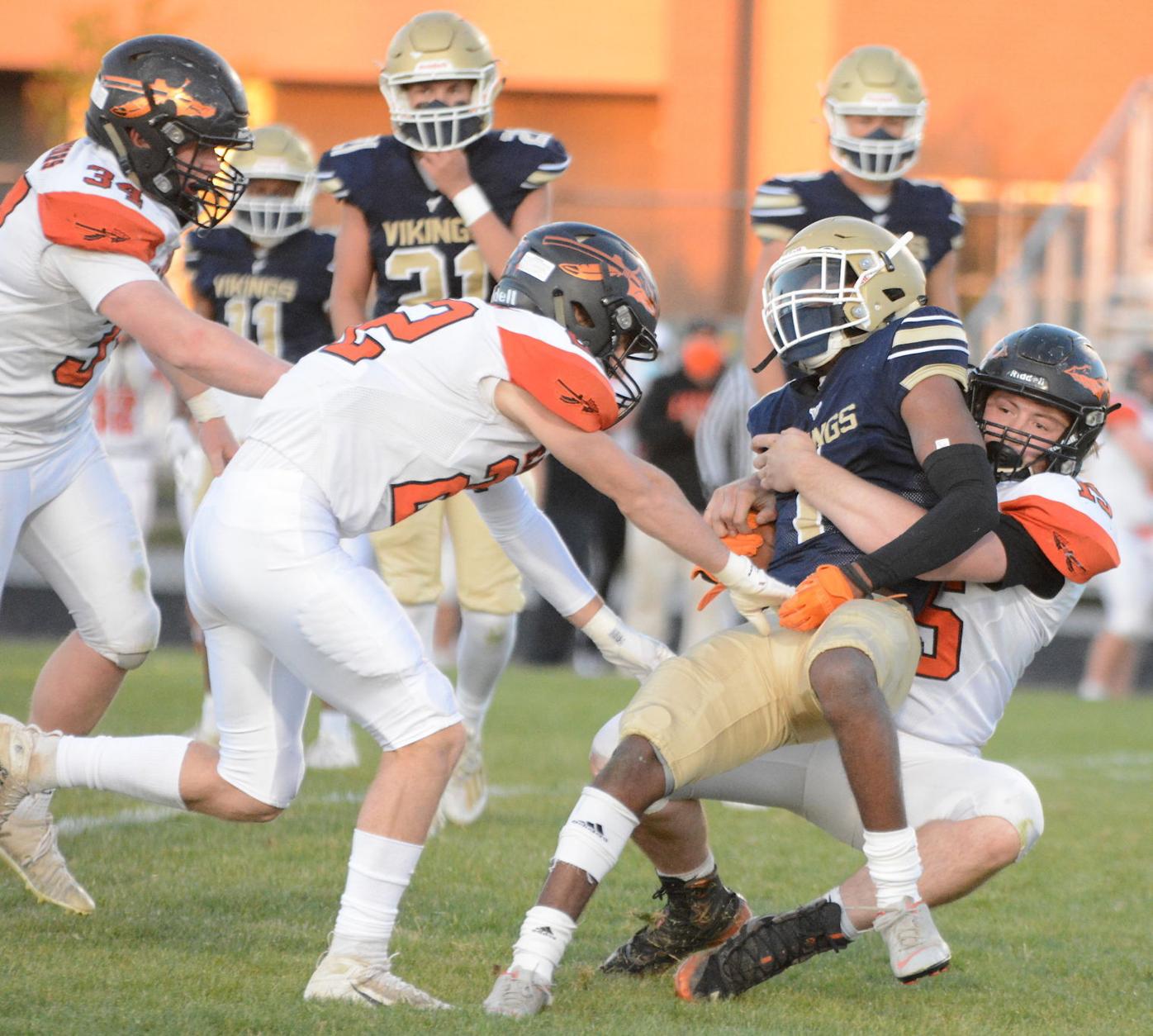 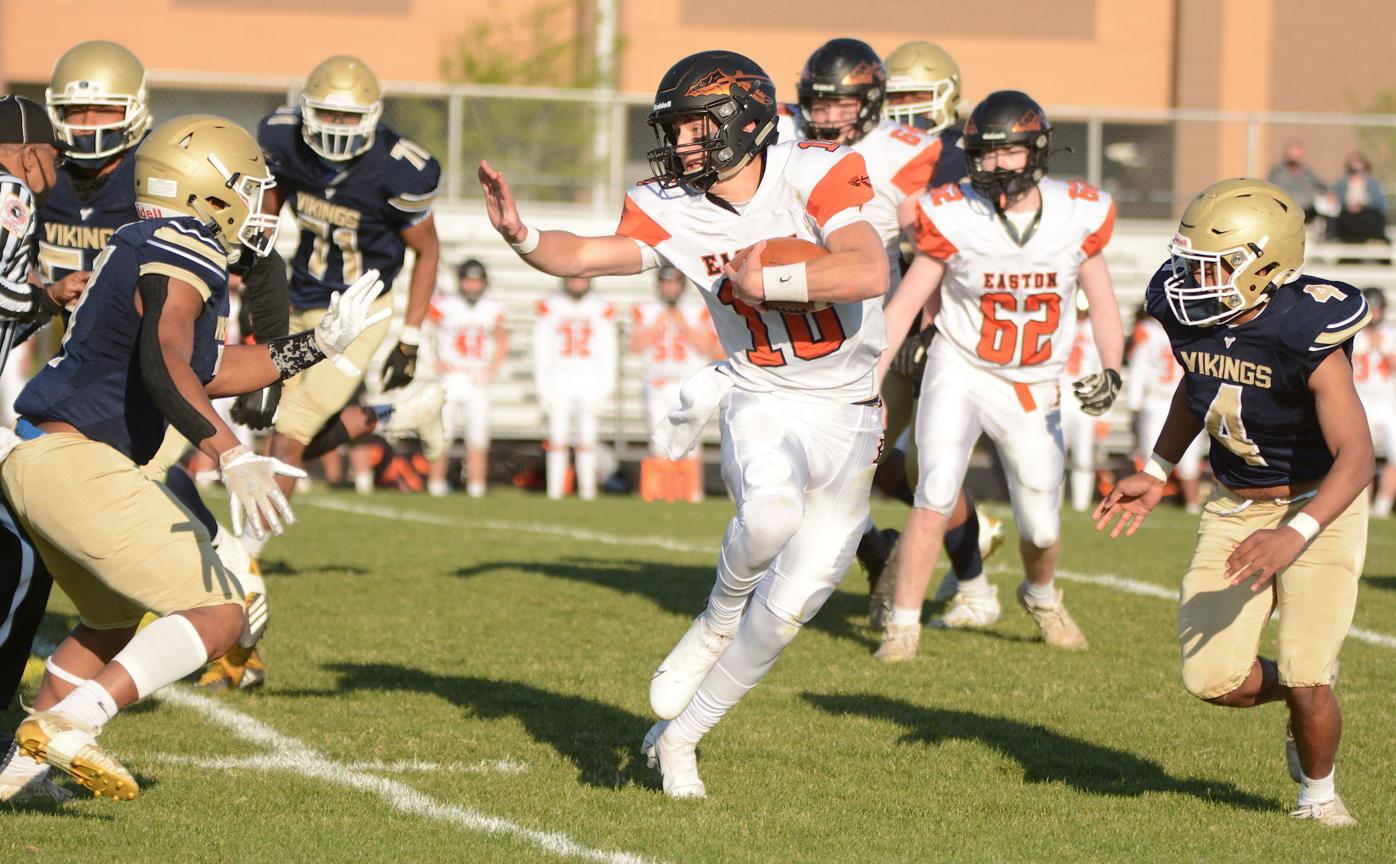 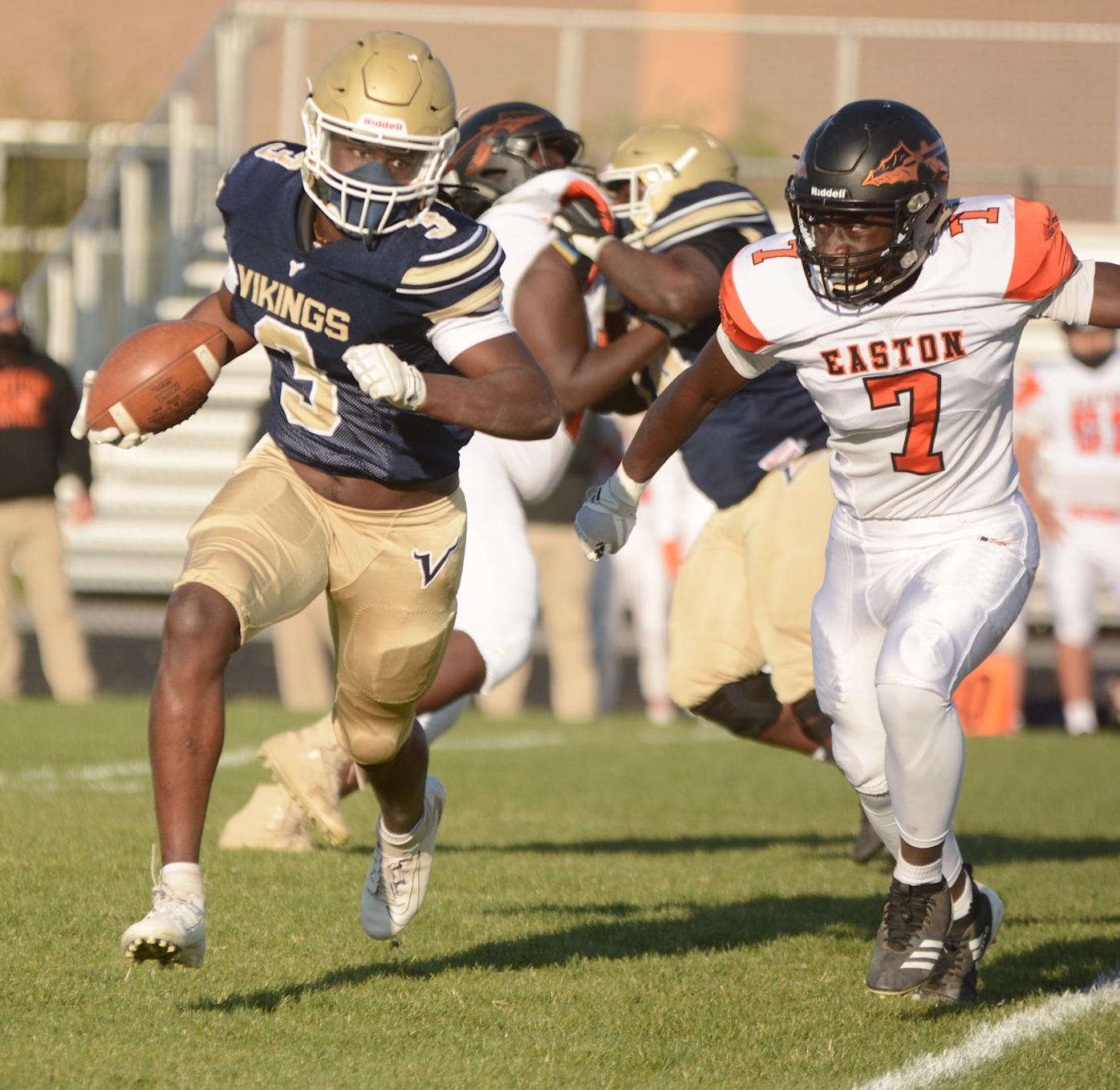 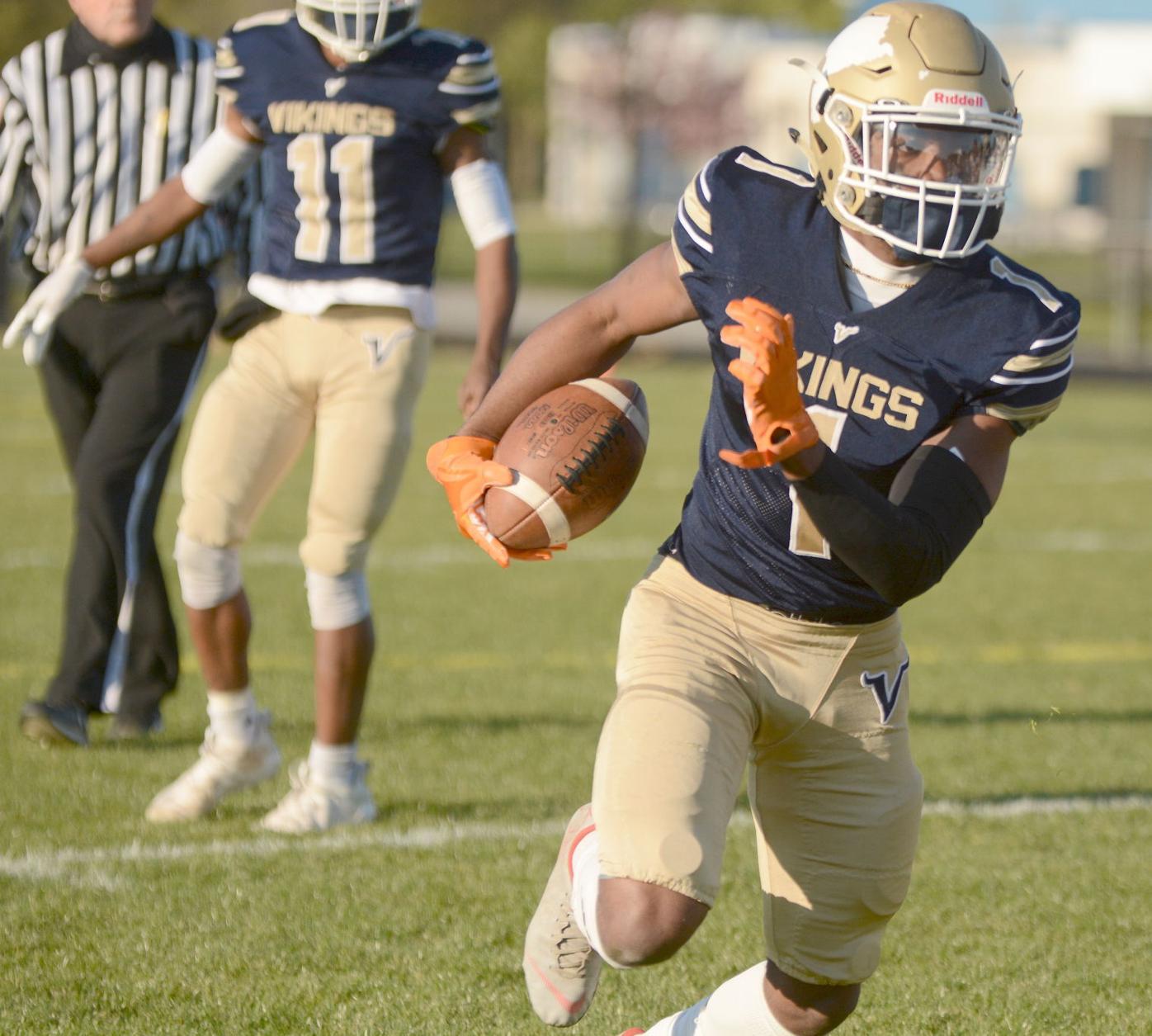 Cambridge-SD offensive lineman Logan Dukes (55) gets caught in the middle as Easton’s defense swarms over running back Tim Johnson during Friday’s first half.

Easton running back Graham Haddaway (4) reaches the ball over the goal line for a 1-yard touchdown run during Friday’s third quarter against Cambridge-SD.

CAMBRIDGE — It’s been a season where area teams — no matter what the sport — genuinely did not know what to expect from one week to the next because of the ongoing COVID-19 pandemic.

Games were canceled, rescheduled, then canceled again. At some schools, seasons were paused for two weeks because of health concerns to the point where players and coaches were prevented from having contact.

But the unexpected ending Easton High’s football team tacked on its season Friday night at Cambridge-South Dorchester’s Fleetwood Field at McWilliams Stadium was refreshingly about history, not COVID-19.

“I know me and the seniors haven’t beat them here,” Warrior linebacker Jarin Winters said of winning in Cambridge. “I’ve been playing here since Pop Warner and for the last game (I) ever play in this stadium, to go out with a shutout and a win is just unbelievable. Can’t explain how it feels.”

Not once in the previous 44 meetings between the Warriors and Vikings, had Easton ever shut out Cambridge-SD, which it opened its doors in 1976.

That was until Friday.

Led by Shareef Curry’s three interceptions and the hard-nosed Winters, the Warriors blanked the Vikings 24-0, completing an unbeaten season with their first-ever shutout of their longtime rival.

“If you would have told me we would have been undefeated with two weeks of (preseason) practice, no weight room, no 7-on-7, kids just thrown together pretty much, ‘cause there’s kids on this team I’ve never played with before, I would have told you you’re crazy. That’s not happening,” Winters said. “Not because I didn’t believe in them, but because going undefeated with two weeks of practice, beating five teams straight, that’s hard. Damn near impossible. But we came together as a family and we showed what Easton football’s about.”

A key part of what Easton’s been about this abbreviated fall season is leadership said senior quarterback Ryan O’Connor, who battled stiff crosswinds and an outstanding Viking secondary to complete 15 of 38 for 205 yards, a touchdown and two interceptions.

“This year by far we’ve had the best leadership I’ve ever seen on a team that I’ve been on,” O’Connor said. “Jarin, Grant (Copper), Billy (Haufe), Henry (Booth), we all lead in different ways. There was never a thought that we would lose a game ever. Not one time. And if there was playoffs this year, this would be a state championship-caliber team. We never think we’re going to lose a game.”

Easton (5-0) may not have been in jeopardy of losing against Cambridge-SD (5-2) — a team that had scored over 50 points in each of its previous three games — but the Vikings looked ready to take an early lead.

After Tayon Fletcher intercepted O’Connor to end Easton’s first possession, Cambridge-SD started from its 37-yard line and moved to Easton’s 16, where Nisim Hawkins was sprung for an 11-yard gain on the 11th play of the drive. Fletcher carried to the 1 on first-and-goal, but then was stuffed for no gain. After an offsides penalty against Cambridge, quarterback John Henry was stopped for no gain, then was intercepted in the end zone by Curry on fourth down.

Cambridge-SD was 2 for 3 on third-down conversions on its opening drive, but went 2 for 10 the remainder of the game, and was 0 for 5 on fourth down.

“I thought our defense outshined our offense,” McGlinchey said. “They played four quarters, backs against the wall in some cases. But once they kind of got out of that first hole, where they were kind of doing a goal-line stand, I just felt like we shut them down.”

Cambridge-SD drove into Warrior territory four times on its other 10 possessions, but was stopped three times on fourth-down runs. The fourth ended with an incomplete pass from quarterback John Henry (2 of 10, 16 yards).

“I think when you play a pretty good defense like Easton has, you’ve got a pretty good inside linebacking crew and your defensive line is just stout, we got to connect,” Cambridge-SD head coach Gaven Parker said. “And we missed a few plays early. And when you play a good team you can’t do that. If you’re going to win games, when you get the chance to stick one in, or bust a big play, you’ve got to make it and we didn’t. We had four turnovers. Self-imposed. I don’t think anything crazy happened. Easton made us make plays and we didn’t make the plays.”

Easton did make the Vikings pay, turning three of those turnovers into 17 points.

Winters recovered a Tim Johnson fumble at the 50 with under 8 minutes remaining in the first half. O’Connor hit Copper for a 17-yard gain, then found John Carrieri for 23 yards before Graham Haddaway powered through the middle for a 5-yard touchdown run. Tristan Cassell’s extra point gave Easton a 7-0 lead with 6:32 remaining before half.

Curry’s second interception set up a 30-yard field by Cassell, who lined it through the uprights for a 10-0 cushion with 6:52 left in the third quarter. Easton’s junior cornerback snagged his third interception on the Vikings’ next possession. After O’Connor and Copper (5 receptions, 59 yards) connected for a 15-yard gain, Haddaway ran around right end, was hit by two Vikings, but reached the ball across the goal line for a 1-yard touchdown and a 17-0 lead with just under 5 minutes remaining in the third quarter.

Easton continued to muzzle Cambridge-SD’s big-play potential, as it limited the Vikings to only four gains of 10 or more yards the whole game.

“We put our fast guys on the edge,” Winters said. “If you keep them inside they’re not going to beat you; they’re not going to break a big one on you. So we kept our fast guys outside to keep them contained. And our D-line, they played outstanding tonight, getting in the backfield, disrupting, hitting the fullback. It was big. Linebackers, they took on the lead blocks and the backside linebacker filled and made tackles. That’s just what you have to do against a good team.”

O’Connor threw his 64th career touchdown pass with 1:27 left when he found Copper in the corner of the end zone for a 13-yard scoring strike. Cassell again booted the point-after kick.

“We got our running back some love this week and that’s fine with me,” O’Connor said. “I’ve had my glory as far as touchdowns go. I’m happy that Graham got some attention. I don’t care. We won the game. We won the game and maybe that’s some part of growing. We just care about winning the game.”

McGlinchey praised Cambridge-SD’s defense, which held O’Connor to his lowest yardage total of the season.

“In being able to bring pressure with four and five, and being able to leave seven, eight in coverage, depending on the time, it makes a difference,” Parker said in reference to defending Easton’s senior quarterback. “I think the secondary did a phenomenal job in space.

“But I think our defensive line and a few timely blitzes off the edge is what really kind of kept him from getting into a rhythm,” Parker continued. “And I think that’s the biggest thing. When you’re talking about a kid of that caliber, he’s going to make plays, but it’s all about keeping him out of a rhythm. Because if he gets into a rhythm the chances of beating him go drastically go down.”