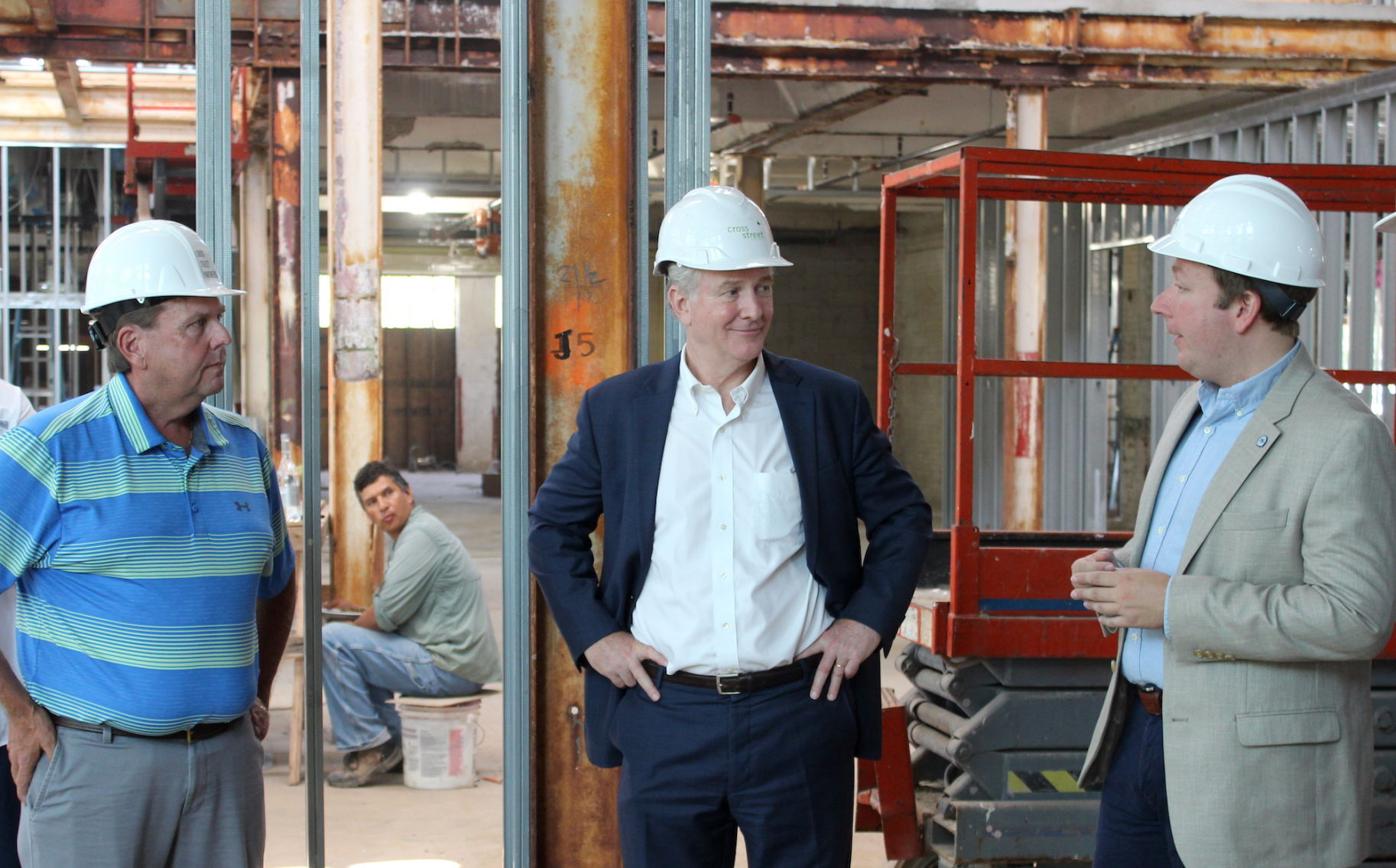 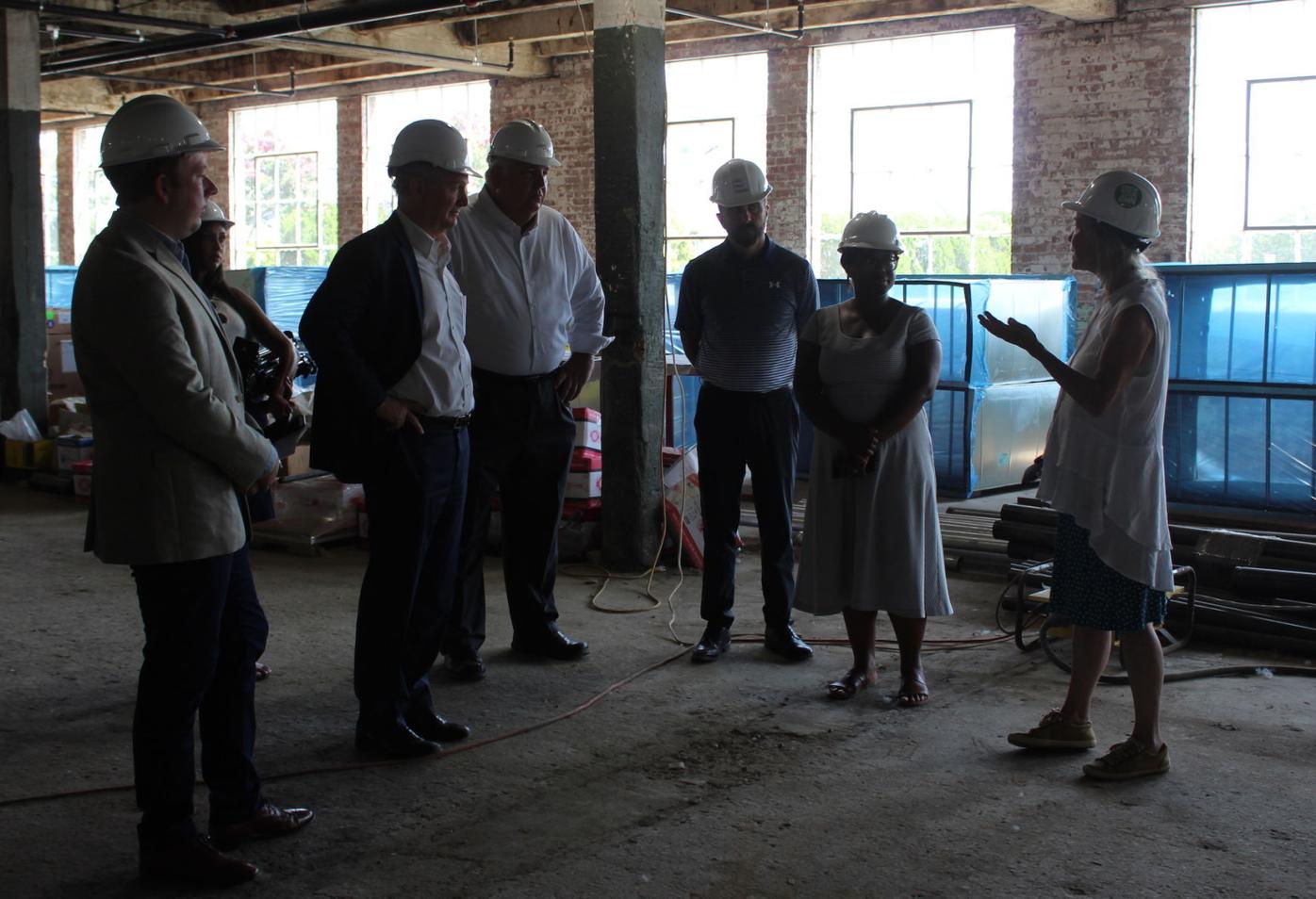 Senator Chris Van Hollen and others tour the Packing House in Cambridge. 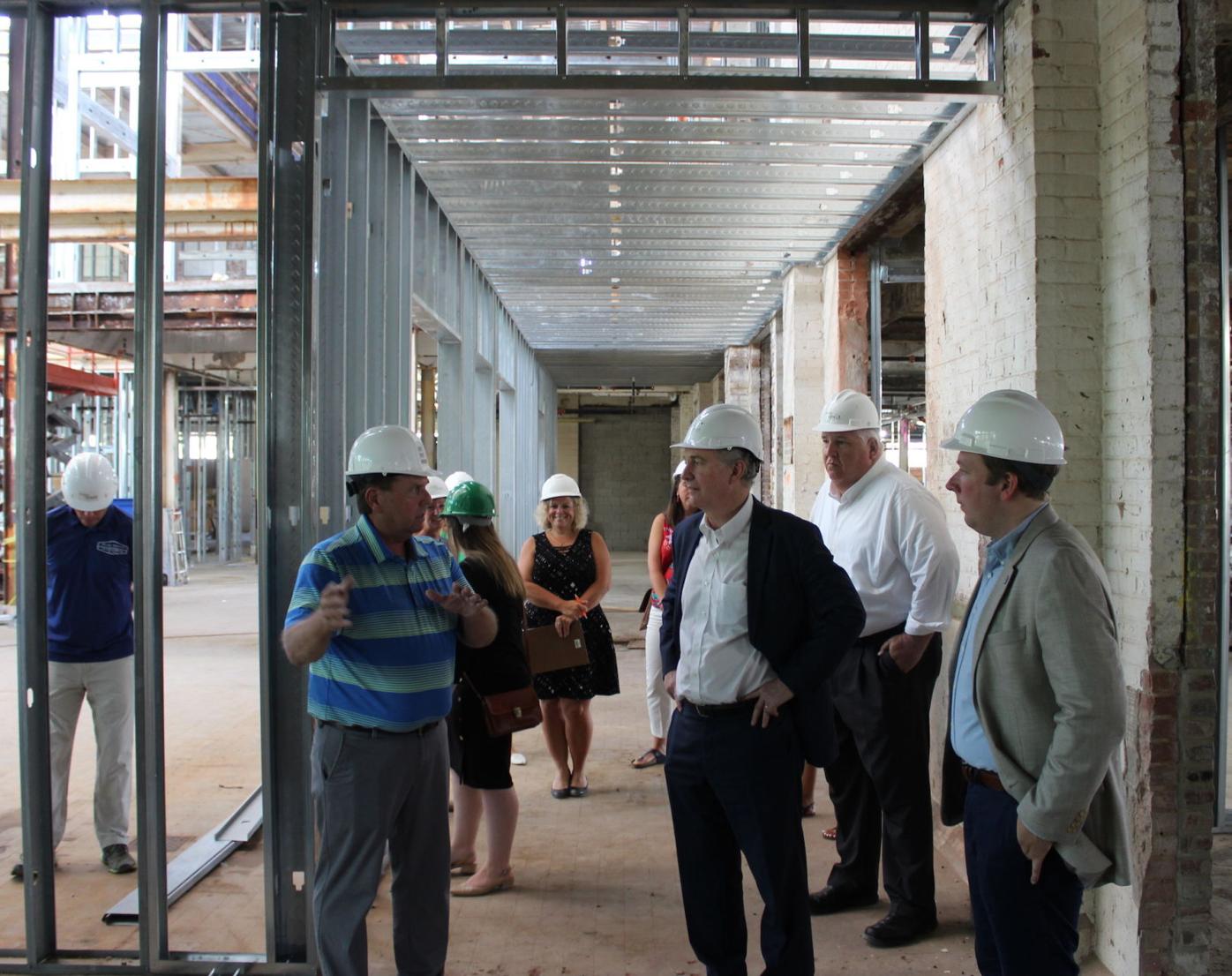 Johnny Shockley describes the future layout of his oyster operation in the Packing House to Senator Chris Van Hollen. 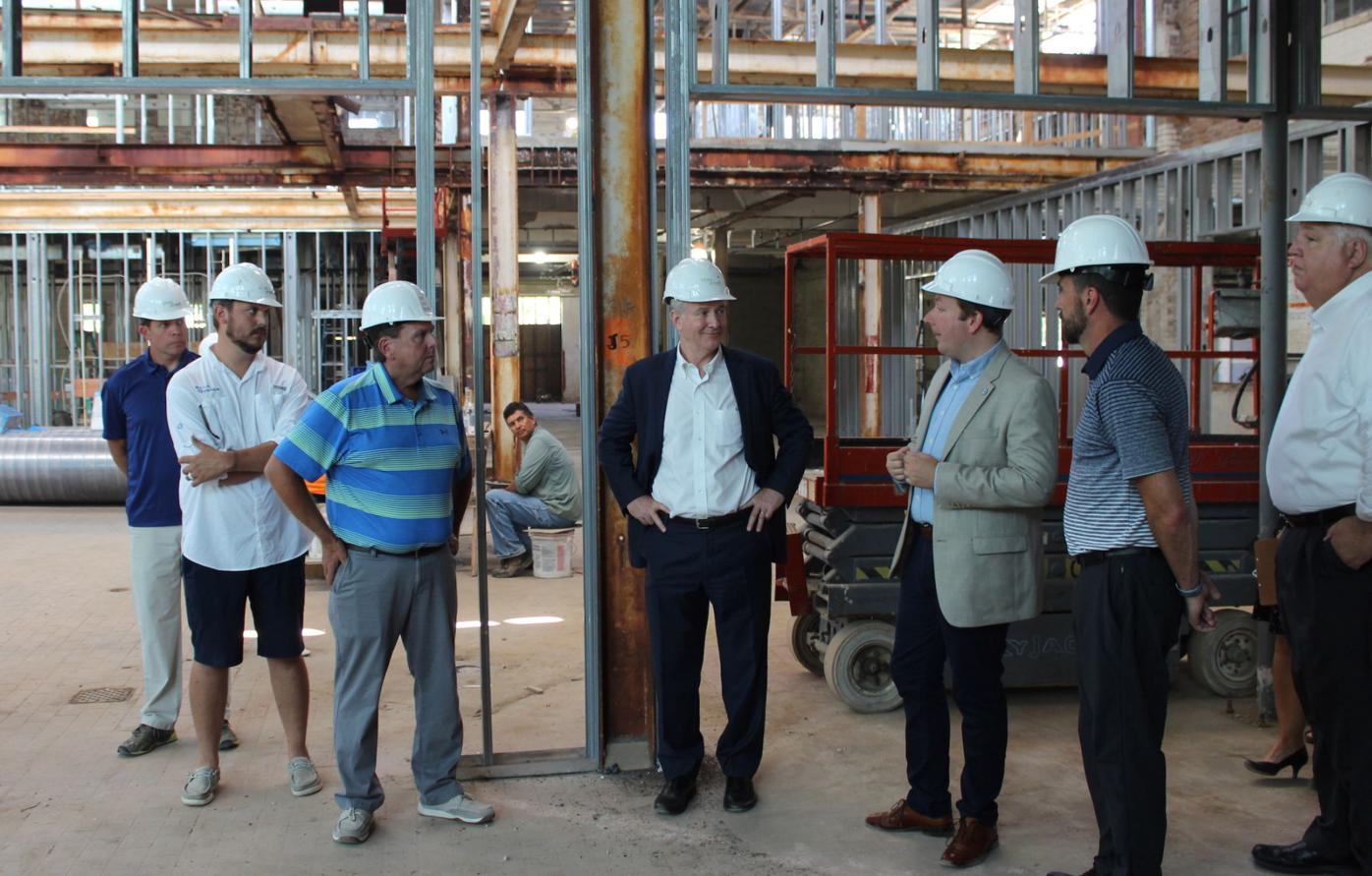 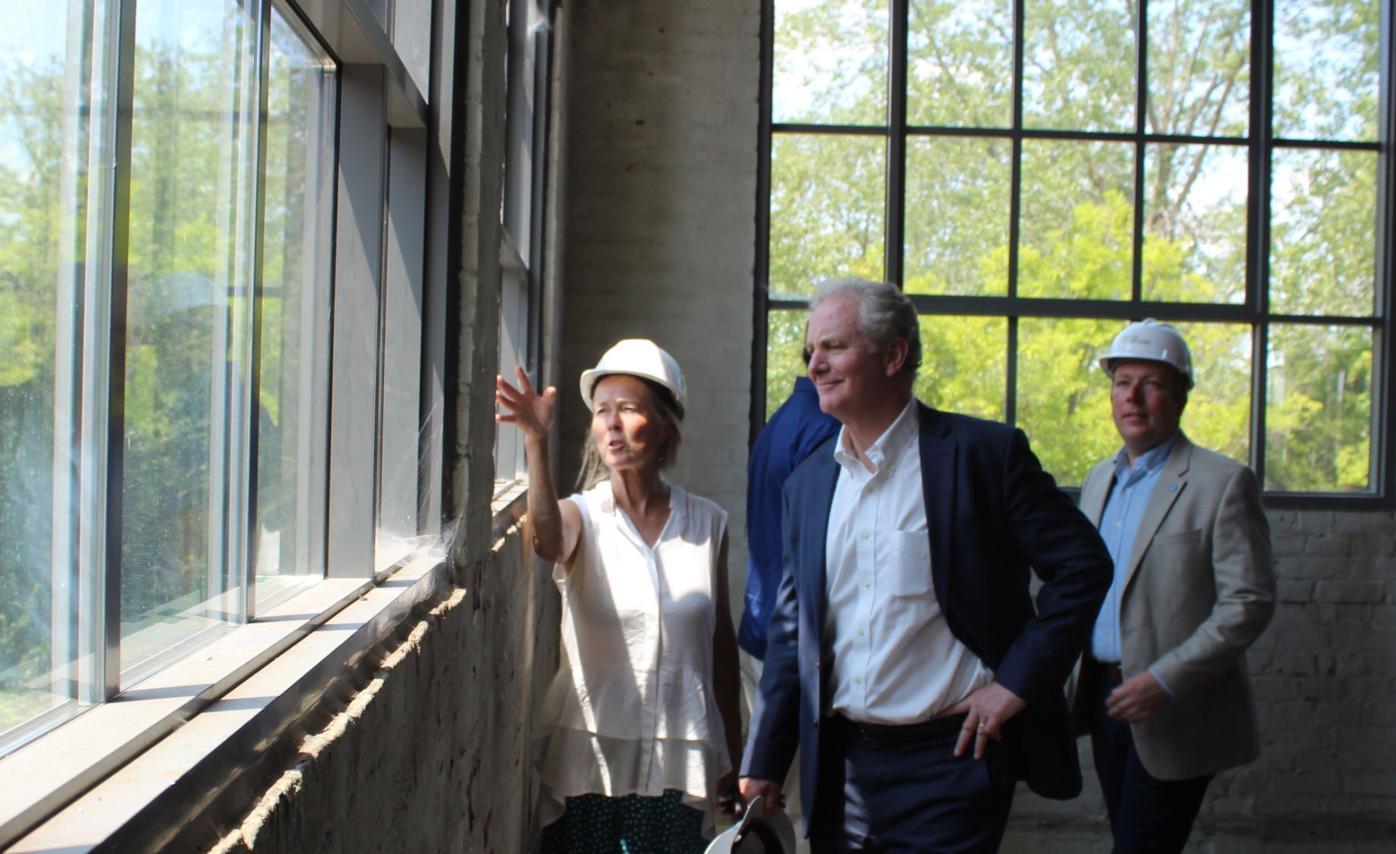 Senator Chris Van Hollen and others tour the Packing House in Cambridge.

Johnny Shockley describes the future layout of his oyster operation in the Packing House to Senator Chris Van Hollen.

Cross Street Partners, in partnership with Eastern Shore Land Conservancy, is in the midst of a major renovation of the former Factory F of the Phillips Packing Company, with an eventual goal of restoring and re-purposing the 60,000 square foot facility as a center for local food and beverage production, food business incubation, and other non-profit and entrepreneurial uses.

Mayor Andrew Bradshaw and County Councilman Lenny Pfeffer along with other officials and stakeholders joined Van Hollen and staff from Cross Street and the Eastern Shore Land Conservancy. The tour took participants through the future location of a shared-use kitchen, and oyster processing facility, and upstairs through space intended for Maryland Department of Housing and Community Development offices, media production facilities and other uses.

“It’s going to be an exciting venue that brings together all sorts of different kinds of people,” Van Hollen said.

In addition to bringing people in the community together, “it will be a magnet for people from the whole region...that’s why we’re asking for some federal funds to try to support it,” he said.

“What can be better than eating some oysters, some good drink, music and other things?” he asked.

Van Hollen said he is seeking $1.4 million for the Packing House from a variety of sources. He said funding was not guaranteed, but he promised to “work hard” to get it.

Cross Street’s Margaret Norfleet-Neff said the developers’ intention is to begin to put the site to use this winter even though the project won’t be completed.

“We really want to be active in the winter,” she said, “Everybody knows what to do in the summer.

“It was really amazing to be able to walk through the space with the senator explaining the operation we seek to have,” Kidd said after the tour.

“We’re creating a commercial kitchen space that will empower, elevate and establish a thriving food economy within the county and the surrounding areas,” Kidd said of the project she is heading up. “We’re closing gaps between the larger corporations and small food businesses and creating opportunities.”

Kidd believes she is qualified to understand what new “foodtrepreneurs” face as they enter the market. “Being an business owner in the food industry, I’ve seen and I’ve heard the challenges that food entrepreneurs have” She said she wanted to be a “catalyst” for those in the Four Eleven Kitchen program that will use the space.

After the tour, Shockley pointed out the connection of the senator’s family heritage in Maryland’s oyster industry (Van Hollen’s family was one of the first major oyster processors in Baltimore) with his current advocacy.

“He (Van Hollen) is very passionate about the oyster industry, very knowledgable and appreciative of the industry and the grassroots economy that it develops,” Shockley said.

Shockley said Van Hollen recognizes the importance of both integrating the oyster industry into clean water initiatives, as well as the capitalizing on advances in oyster technology, what Shockley called “a revolutionary answer to an age old problem — the oyster industry and a clean Chesapeake Bay.”