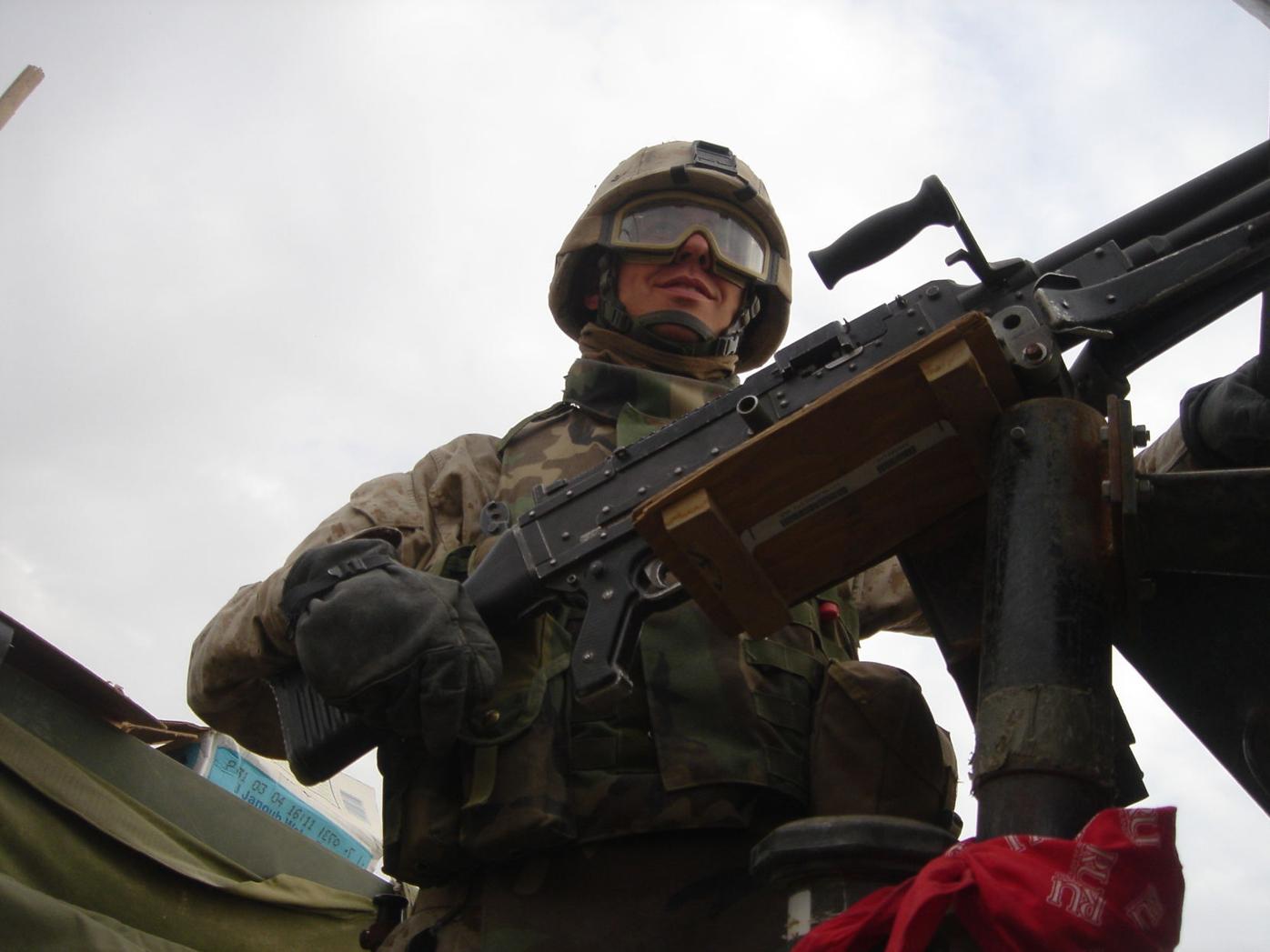 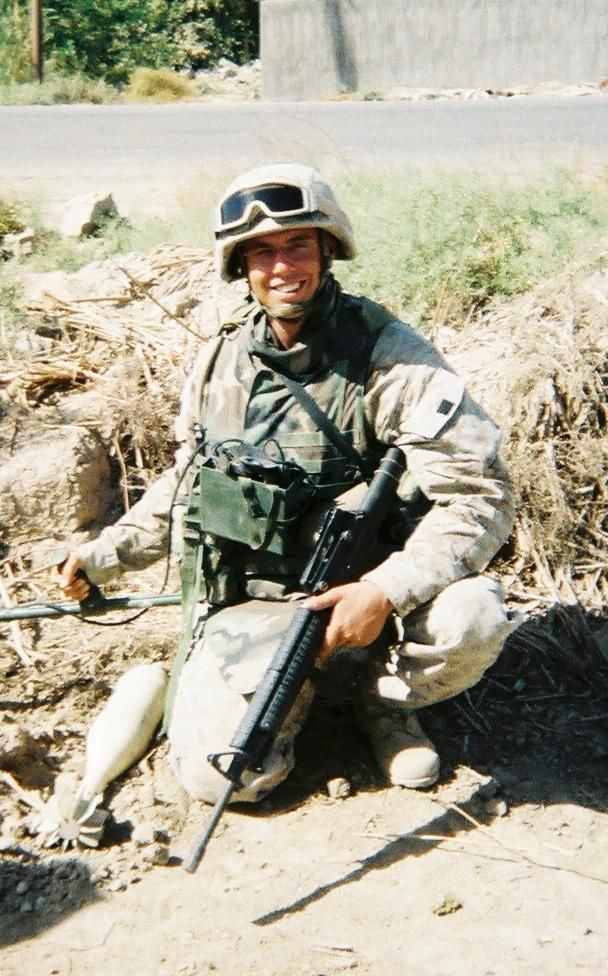 Mike Detmer kneels next to a 120mm mortar, part of a weapons cache that he discovered while on patrol with his platoon in Iraq. 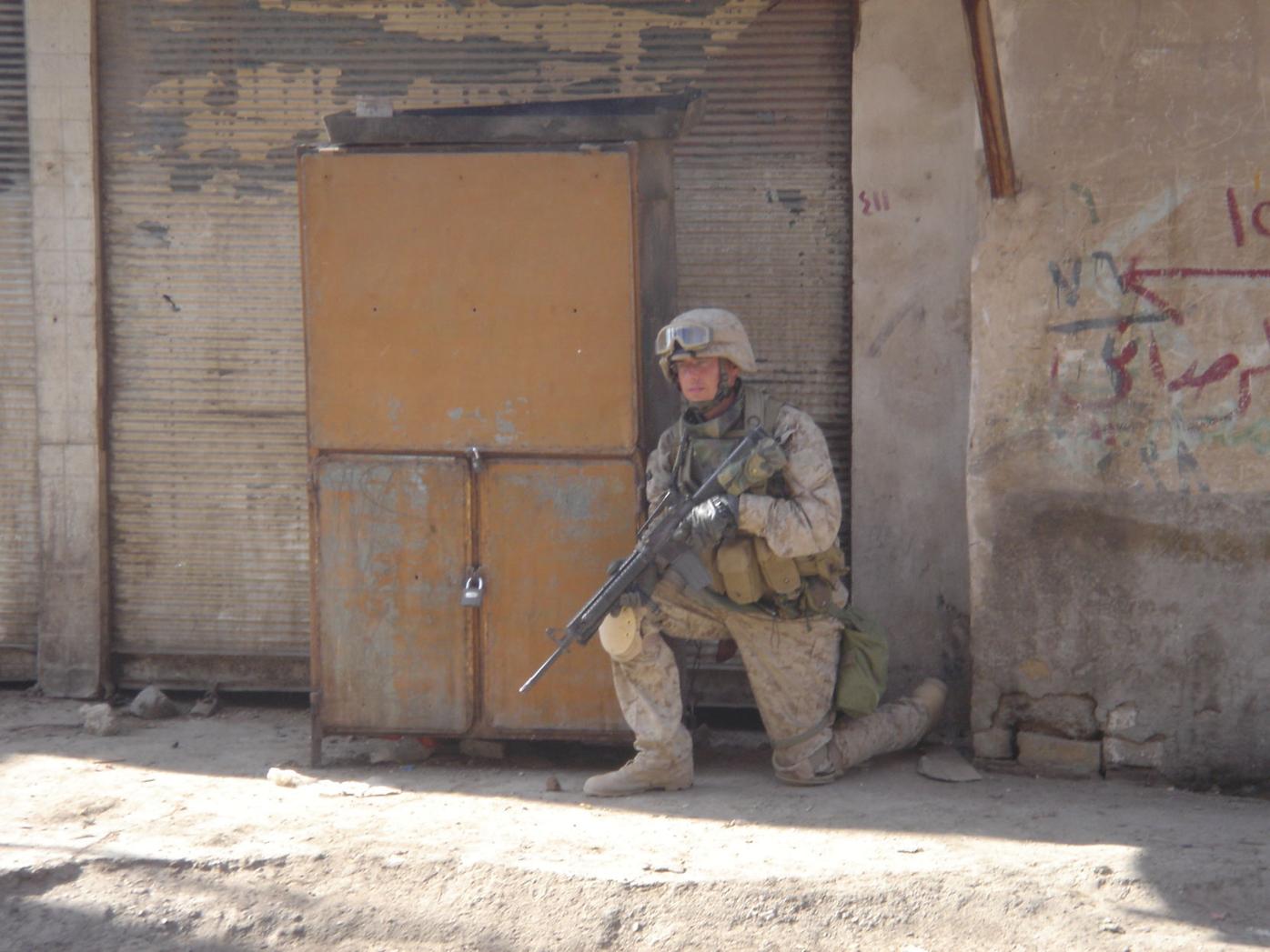 Mike Detmer kneels while on patrol with his squad in Fallujah. 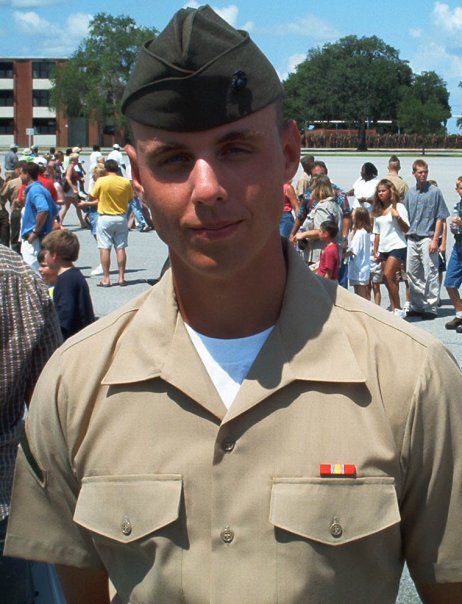 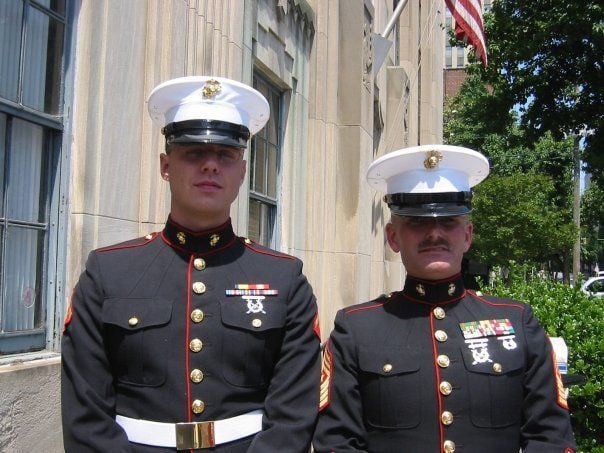 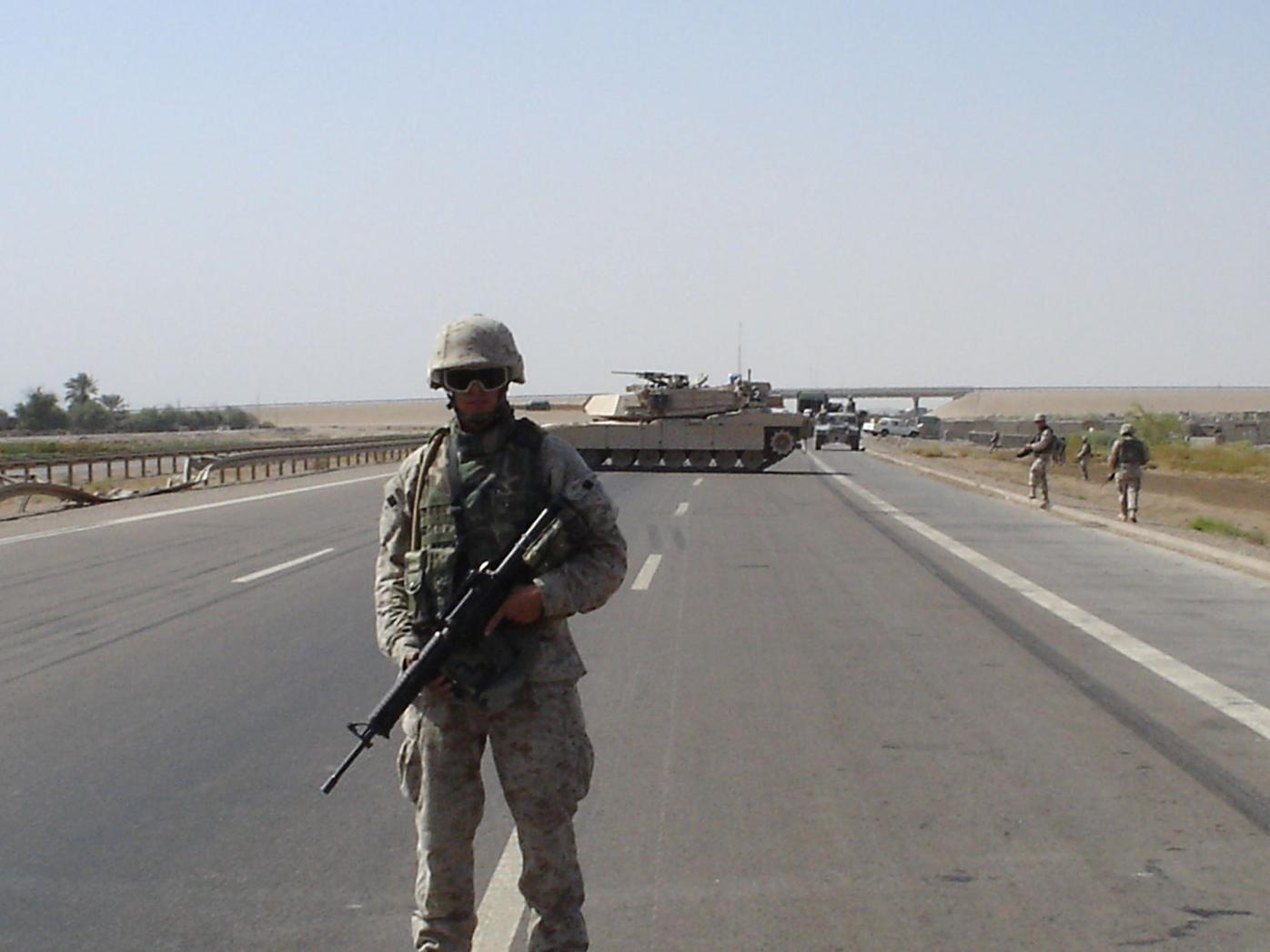 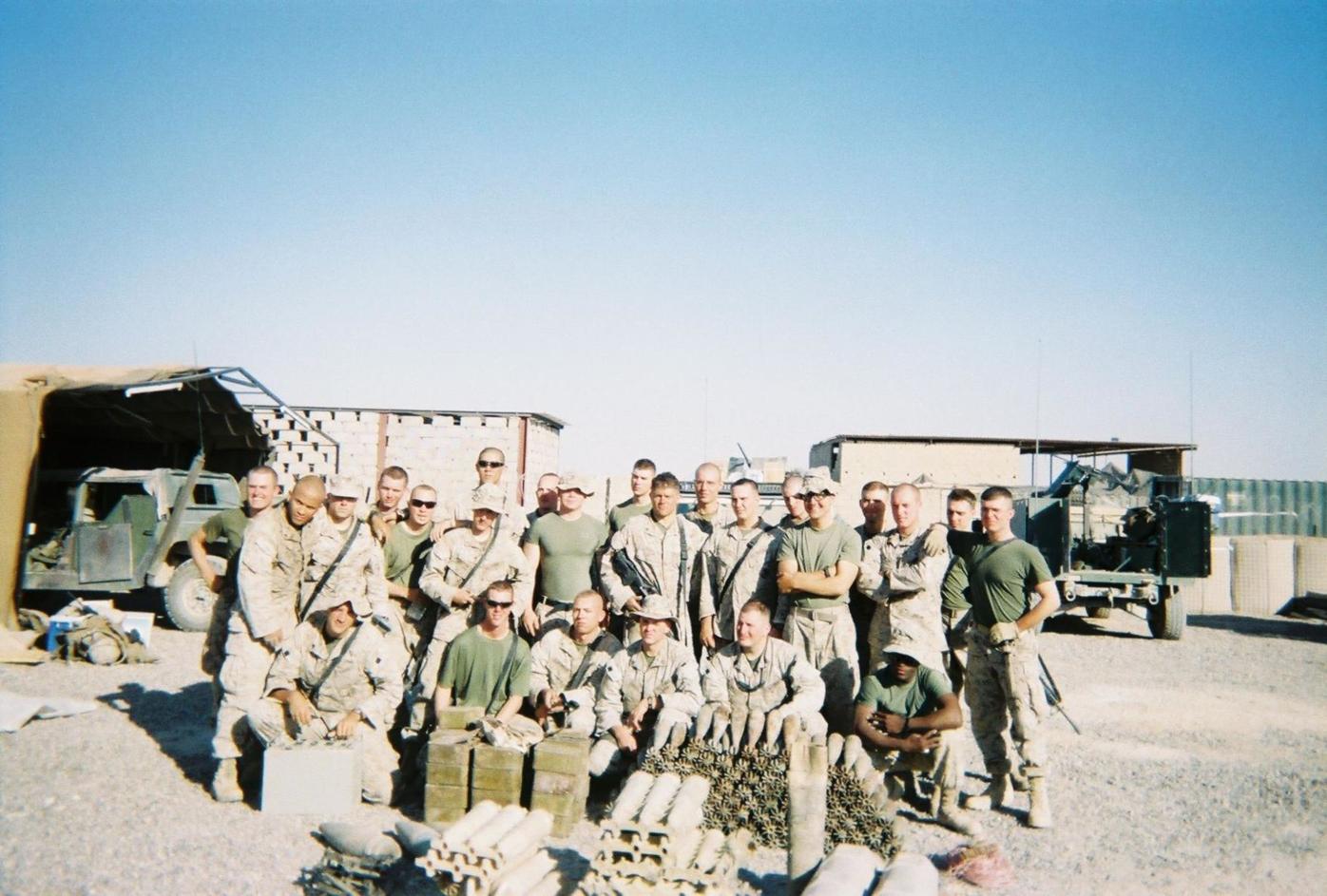 Mike Detmer kneels next to a 120mm mortar, part of a weapons cache that he discovered while on patrol with his platoon in Iraq.

Mike Detmer kneels while on patrol with his squad in Fallujah.

CAMBRIDGE — After graduating with a degree in communications from Liberty University in 2001, Mike Detmer began to think about his next steps. Though he had considered the military, he started leaning towards law enforcement. After the terrorist attacks of 9/11, his plans began to change.

“Everybody was in a very patriotic mode, and I had just graduated from school,” Detmer said. “So I thought about it — I made a pros and cons list — and walked to the recruiting offices. I didn’t make it past the Marine recruiter.”

The Dorchester Star reporter recently recalled his tour in Iraq as a combat engineer. A 1997 graduate of Cambridge-South Dorchester High School, Detmer served his country in the wake of the terrorist attacks of 9/11, and came back home where he is raising his three children. His Eastern Shore values, grit and talent — along with his training and career as a U.S. Marine — have served him well.

Detmer decided to enlist in the U.S. Marine Corps Forces Reserve. He became a Marine on Sept. 5, 2002 and returned to Lynchburg, Virginia. The war in Iraq began in March 2003, but his reserve unit — Company C, 4th Combat Engineer Battalion — wasn’t going. After several months, he felt the urge to get into the action in some way.

“One of my upstairs neighbors was a reporter for the paper,” he said. “I thought, ‘Man, I’m going to miss this Iraq thing, a big issue for our generation, and I’m going to miss it.’ I actually thought about seeking leave and asking the paper if they wanted me to go over and cover it.”

While he tried to work out a plan, he received a call from a friend in the unit in the spring of 2004.

“He said, ‘Hey man, I heard our unit is going to mountain warfare training in California and then we’re going to Afghanistan.’ So I called my squad leader and said, ‘Hey, I just heard this rumor,’” Detmer said.

The next day, his squad leader called back and said the rumor was half true, the unit was being activated and sent to California for training, but they were headed for Iraq instead of Afghanistan.

“And right after July 4, we flew out of Richmond and into southern California and we trained,” he said.

The Marines received refresher training, as well as training on newer techniques and newer equipment, which Detmer said was invaluable.

Company C began their deployment in September 2004, arriving at a small camp west of Baghdad and east of Fallujah.

“It was the Al Anbar province; all of that had been Baathist turf, and it was still just a hotbed of insurgency,” he said.

Detmer, a combat engineer, was assigned to an infantry company from 3rd Battalion, 1st Marines. One of his main roles was operating the mine detector. He would search for improvised explosive devices (IEDs) and weapons caches. He still remembers his first find.

“On my first patrol, we’re in this yard and I looked in the back corner of the yard where there was a palm tree,” he said. “In front of that palm tree was a little rectangular depression — maybe like 3x3 — you could just barely see it was sunk down. So I went over and swept it with the minesweeper and got a hit. Sure enough, it was bayonets, some ammo and some grenades.”

He also trained in demolition, using plastic explosives to detonate any weapons caches they uncovered. He laughed remembering one demolition in a canal near a field.

“I was working with this infantryman who was also trained in demo. We walked by this cow — he’s just standing there chewing his cud,” Detmer said. “I took the stuff (the weapons cache they’d found) back to the canal bank. We tried to shoo the cow away, but he wasn’t having it.”

After they detonated the cache, they returned to make sure everything had been properly destroyed.

“We came back and he’s still looking at us, totally unfazed,” he said of the cow. “He’d probably seen some stuff in his life. He was a salty old vet, for sure.”

Through the rest of September and into October 2004, Detmer spent a lot of time operating the mine detector on patrols.

“I found a lot of stuff — that was rewarding,” he said. “One time I was sweeping on a canal bank across the street from a mosque, and I found a relatively large cache. I started finding more and more — hundreds and hundreds of mortar rounds, grenades and whatnot.”

He recalled when he and the Marines on his team started to realize that a big mission might be on the horizon.

“We started seeing shipping containers that had paper labels on them; they said, ‘For Fallujah Only.’ We knew we were headed there,” he said.

The insurgency in Anbar Province had been picking up steam. The Marines had seen an uptick in suicide vehicle-borne improvised explosive devices (SVBIEDs).

“One day we were sitting there in a concrete building that had a plywood door, and the door blows open,” Detmer said. “It sounded like a huge explosion outside.”

The explosion hadn’t been near the building, it was an SVBIED that was detonated near a faraway guard post. Detmer and his fellow Marines were part of the quick reactionary force (QRF) that responded to the attack that was followed up within seconds by another, much larger, SVBIED.

The second SVBIED was a dump truck full of explosives. Detmer said the intended target had been the vehicle entry point for the Marine base, but it didn’t reach its destination and luckily had detonated in the middle of the street.

Toward the end of October, they were given orders to execute a combat patrol towards the city.

“It just felt different,” he said. “We had been on combat patrols and (had) even gone to the aftermath of those vehicle bombs. Little did we know that we were literally patrolling up to where they would start shooting at us.”

Detmer was patrolling with his mine detector when he saw a very thin wire going across the road — the type used to detonate IEDs. As they traced the path of the wire, the Marines began taking fire. They returned fire as they ran for cover. As they took cover, they began to take mortar fire.

“I looked over, and I remember a couple of my buddies — it’s almost like a cartoon — they jumped out of the way, and I watched the mortar blow up right where they had been,” he said.

“I was like, ‘I just want to wriggle down into this dirt, they’ve got us preregistered,’” he said of the insurgents. “I found out later that the Light Armored Vehicle team with their telescopic sight had seen them firing. They hit them with a 30 mm gun, and that was the end of that mortar team.

“You know, Winston Churchill said, ‘Nothing in life is so exhilarating as to be shot at without result,’” Detmer said. “And it was exhilarating.”

On Nov. 6, 2004, Detmer and members of his unit began getting geared up again.

“It was very clear we were about to move,” he said. “On Nov. 8, we were ready to go in. We had moved to the desert north of the city. For a full day and two nights, we just watched artillery and airstrikes, it was artillery all night long.”

Detmer said the fighting in Fallujah was intense. There were many days of fighting, and many Marines — friends — were lost.

“One of the guys from my platoon was killed,” he said. “It’s tough. There’s a lot of toughness and a lot of bravery and a lot of hardship.”

Following the assault in Fallujah, Detmer returned to searching for IEDs, weapons caches and other dangers while on combat patrols with the infantry.

“We did a lot of patrolling and we found a lot of stuff. But compared to where we had been, it was really low-key,” he said. “On the last patrol, we were stopping for a long period of time. I don’t know why we stopped at that point, but it was really calm and peaceful and the temperature was just right.”

He continued, “To have that be the last patrol and just have it be so boring and nothing happening, (was) nothing like what we had experienced earlier in the deployment.”

In spring 2005, his tour in Iraq was coming to an end. He returned to Lynchburg with his unit in March. They were welcomed by a police escort and the streets were lined with people holding flags and cheering their return.

“We flew back to Richmond (and) started towards Lynchburg on these charter buses. We started seeing these cops just blow by us,” he said. “We got police escorts the whole way back, making sure we didn’t have to stop at any intersections. As we got closer to Lynchburg, there were hundreds and hundreds of people waving. It was really remarkable.”

Detmer was honorably discharged from the Marine Corps in the summer of 2006 and still keeps in contact with several of the Marines from his unit.

“I miss it still,” he said. “I miss being tied in with the training, the camaraderie, the mission accomplishment.”

In one instance, he had to train younger Marines on how to find buried weapons and was complimented by a senior Marine for his in-depth knowledge. He still misses that opportunity to try and make a difference for junior troops.

“Everybody has their own path, and I wouldn’t be where I am or who I am,” Detmer said of his experience in Fallujah. “To have that part of history — to be able to count myself among people like that — I got to witness it and experience it.”

“It was the validation,” he said. “You know, Reagan said, ‘Some people spend an entire lifetime wondering if they made a difference in the world, but the Marines don’t have that problem.’”