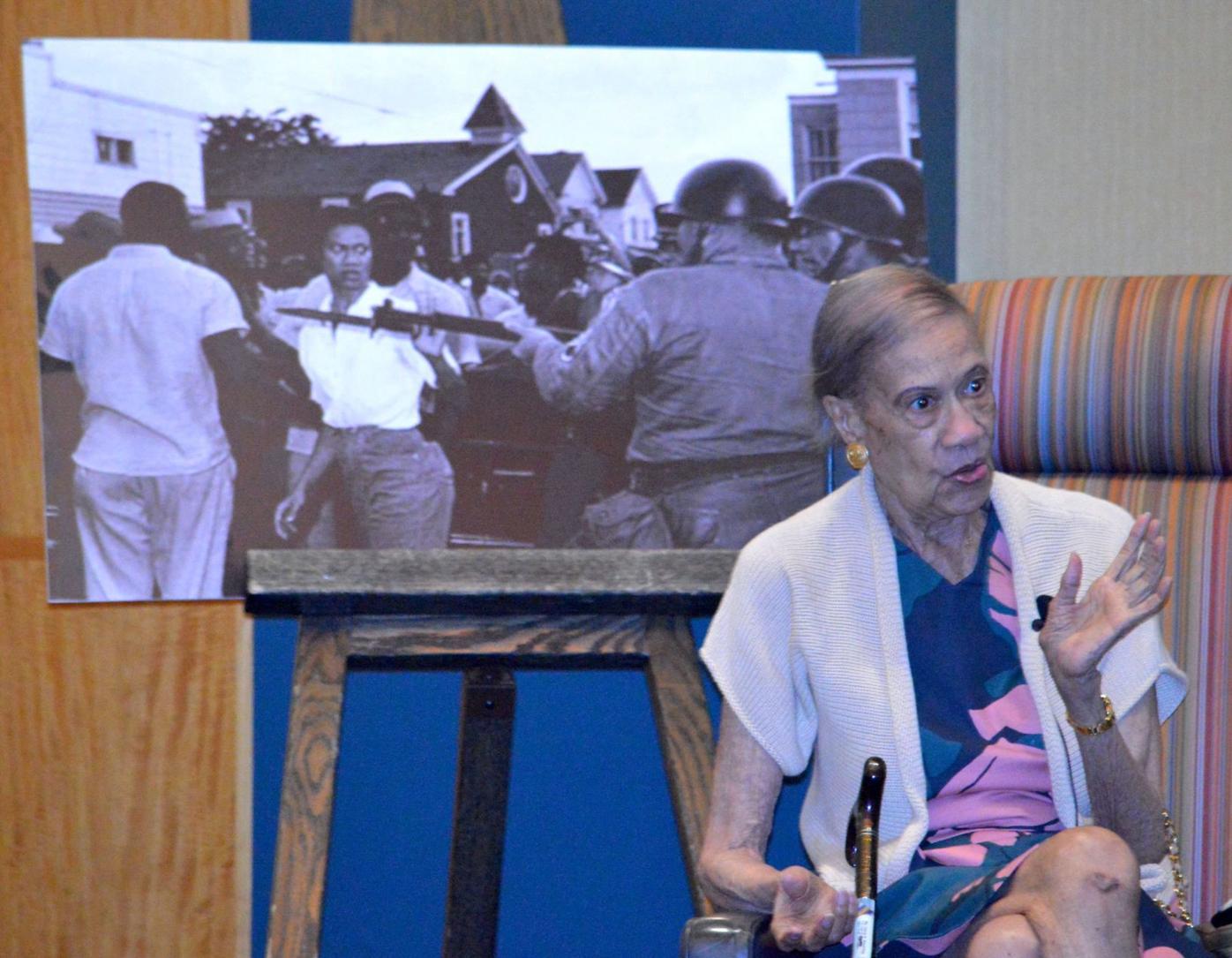 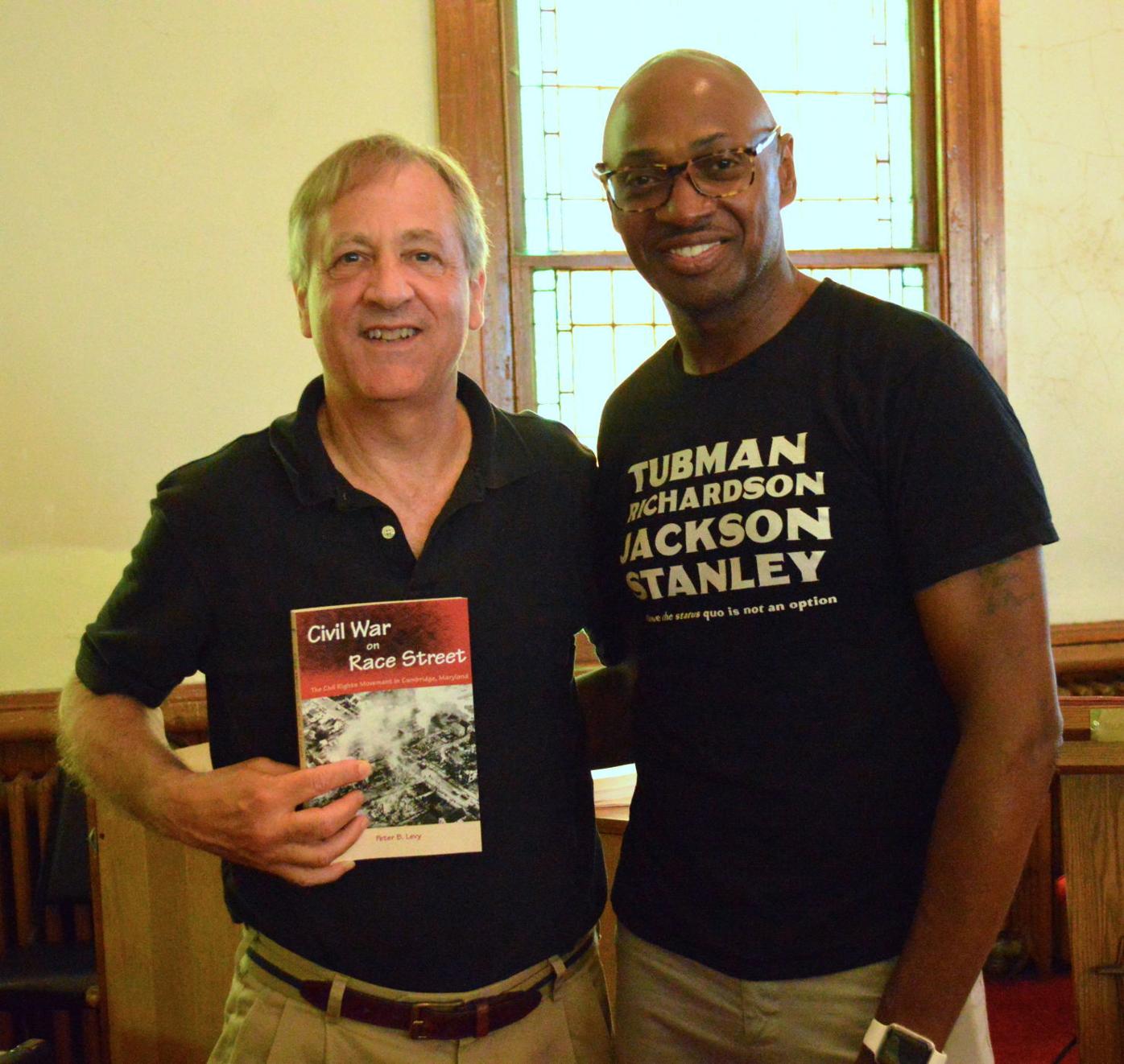 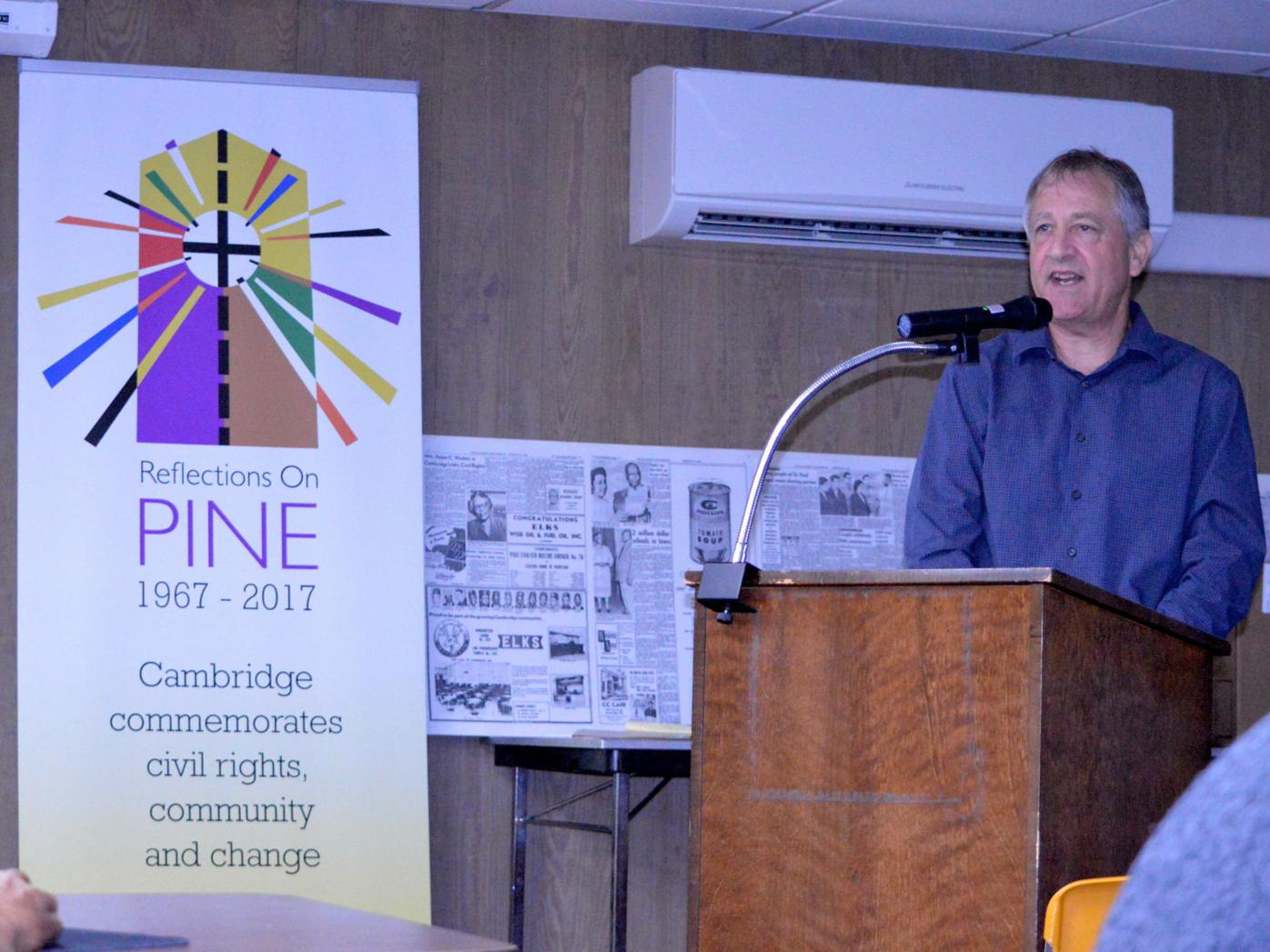 CAMBRIDGE — Eastern Shore Network for Change co-founders Dion Banks and Kisha Petticolas wanted the community, the Eastern Shore and the country to hear the truth about the history of Pine Street in Cambridge.

To tell the story, they organized “Reflections on Pine: Cambridge commemorates civil rights, community and change” from Thursday, July 20, through Sunday, July 23, which coincides with the 50th anniversary of the July 1967 fire on Pine Street that devastated the city’s African-American community.

Banks said the narrative of the fire has been told wrong, and he wanted Cambridge to tell the real story with the country focusing this year on “The Long, Hot Summer of 1967,” which saw race riots occurring in cities around the country.

Levy spent 10 years researching his book and concluded no riot took place in Cambridge in July 1967. Levy spoke about his findings Friday, July 21, at the Dorchester County Public Library in Cambridge.

He blames Police Chief Brice Kinnamon and the all-white fire company for allowing a small fire at Pine Street Elementary to burn for several hours before the fire turned into an uncontrollable inferno, leading to the destruction of 17 buildings in a two-block area of Pine Street, the center of African-American commerce, culture and community.

Levy believes the falsehood of the alleged riot continued for the past 50 years because the documents of the Kerner Commission, which investigated the fire, were not released to the public.

“I had heard a riot took place in Cambridge,” he said. “In learning the background, many of you know Cambridge was the site of one of the most vibrant civil rights movements in the entire country.

“Why hasn’t Cambridge gotten the attention? There are a variety of reasons why it just doesn’t fit with the national narrative. I realized this was an incredible place whose story had not been told.”

Levy said when he began his research, the late Frederick Malkus tried to convince Levy not to open Cambridge’s civil rights wound.

“Aren’t the riots better forgotten,” Malkus told Levy. “What good could come from reminding people that Cambridge had riots?”

Levy said the good that came from his research was learning Cambridge did not, in fact, have a riot, and he wanted to show everyone the common narrative many believe of H. Rap Brown making a fiery speech to incite rioting, directly leading to the devastating fire is false.

“The truth is the police chief essentially said, ‘Let the whole place burn down,’” Levy said. “The fire consumed the Second Ward because the fire company refused to do its job, not because of an incendiary speech or rioting.”

He said the Kerner Commission looked at not just what people said, but what was written down in official logs.

“State police, the National Guard were all here, and they have written logs of what had taken place pretty much every 10 minutes,” he said. “Their logs show what Kinnamon had said, that a riot had taken place immediately after Brown’s speech, was not true. They found a different rendition of events.”

Levy said, according to the Kerner Commission, Brown completed his speech at about 10 p.m. July 24, then walked a woman home and was shot by a deputy sheriff without provocation. He said Brown then was patched up and secretly taken out of Cambridge at about 10:05 p.m.

He said while Brown was being patched up, the white night riders drove through Ward 2, firing guns, and then there was a small fire, but the fire was put out. He said by midnight July 25, the National Guard and the state police were sent home because Pine Street and Ward 2 were calm.

“About a half hour later, another small fire broke out, probably at the Pine Street Elementary School,” Levy said. “In between, Kinnamon heard the speech and was fuming, and had wanted to go clear the place out. But the crucial thing is what took place between roughly 12:30 a.m. and 2:30 a.m.

“What took place was the fire began to spread. The rescue and fire company, which Kinnamon had been a chief of and closely associated to, stood on Race Street and refused to intervene.

“Kinnamon claimed that he didn’t let the fire companies go in because he was worried about the safety of the firemen. There were utility men in the Second Ward at the time, cutting wires with no problem. There were journalists in the area who were not harmed at all.

“In fact, when the fireman finally came in, they were helped out by the community. When the fire company finally comes in not even led by the fire chief. The state’s attorney has to command one of the trucks, but by then the fire had spread out of control.”

After the fire, William Greene, the brother of Green Savoy owner Hansel Greene, said “one lousy truck” could have prevented the destruction of Pine Street.

“I called (the RFC) three times,” he said after the fire. “My brother called twice. Councilman Charles Cornish called. Still the firemen wouldn’t come. The school was burning a long time before the fire began spreading ... But they just wouldn’t come down here.”

Levy said in the wake of the fire and his losses, Hansel Greene committed suicide a week after the fire, and Pine Street has yet to recover.

Though Dandridge was not living in Cambridge at the time of the fire on Pine Street, she believes the Race Street boycott on white businesses and involvement of the black businessmen is what caused the fire company to let the Pine Street businesses burn.

“I think they let that place burn down because they knew the black businessmen in Cambridge were also supporting the boycott,” she said during an oral history presentation at the Hyatt Regency Chesapeake Bay in Cambridge Thursday, July 20. “They were glad to see the stores and restaurants and motels and such, that the black people had built up, were burnt down.

“I think also why they let that place (Pine Street) burn down, is that the black businessmen hired and paid for buses, the gasoline, and the drivers to take people out to Salisbury and Easton to shop.”

Levy said the African-American writer George Collins and Cambridge native writer John Barth got the story of July 1967 in Cambridge correct, but their versions largely went unnoticed regionally and nationally.

“This is our story,” Banks said. “What happened with the national story was that someone else took control of our narrative. All of the efforts that we are doing this weekend is to take control of our own narrative.”

Revisionist history at its finest. Gloria Richardson was, most likely, responsible for H. Rap Brown coming to speak and further inciting crowds of already angry people by telling them they should have burned down the school long ago. Who started the fires, how many were started and why is still up for speculation and to state one way or the other, as fact, does a grave disservice to history. To say it wasn't a riot is like saying the battle of the Alamo was a minor skirmish. Yes, Brice Kinnamon did refuse to let the fire department go in but it was because a sniper on one of the rooftops had shot at the firemen previously and the National Guard had disarmed the City Police. Shortly after that Kinnamon rearmed them with Submachine guns with the order to "never let a National Guardsmen take your gun away again".

Were race relations in Cambridge bad, no, they were horrible and Gloria Richardson didn't help although I'm not sure if anything would have. The one thing I am sure of is that we should never re-write history in an attempt to make it more favorable, in hindsight, to one group or another.

This is truly a sad statement that is possibly base on the belief that everything was fine as long as people stayed in what was considered to be their place, everyone has their own opinion but how can anyone deny fact! It's a fact that the information presented not only came from documentation of the State police, the National Guardsmen, and CPD themselves but the added bonus is the report that was created by the Kerner Commission, it's all in black and white!
Truth is truth and in no report found has there ever been mention of a sniper shooting at RFD during or after the fire, Brown wasn't there when the fire was started although he gave his speech hours before it actually occurred. But as it is the duty of CPD and RFD to protect every community in Cambridge they did a disservice to Cambridge and the black community! But I guess it's fine as long as you're speaking from the point of privilege, people like Gloria Richardson, H. Rap Brown, MLK, Medgar Evers, Malcolm X, and many other leaders made it a point to let the Black Community know that inequality is just what it is, we are not talking about separate but equal and even as a child growing up during that time it was not hard to see. Your statement is almost like saying ok, enough already!!! Did you ever stop to think why people were so angry? You said it yourself race relations were horrible, not only here but many other places as well but as soon as black leaders unite for their community as a whole, then they are considered trouble makers!, riot inciters, not to mention the N-word and many other names!
The last thing that I would like to say is, history has been wrong on many occasions either by deliberately misinforming the public or inaccurately reporting the events as seen or told, the Reflections on Pine is not a move to re-write history in an attempt to make it more favorable for one group or race to blame another the truth was always there during that time, but it was overlooked in favor of bigotry, racism, and commerce!
The city has made great strides in the right direction but the black community has yet to fully recover for example, Pine St. is on the National Registry for historic Streets and the City of Cambridge gets some grant funding due to that designation, and although it is considered part of the Maple Leaf District not a lot of funding goes into the building up of Pine St. the majority goes to Race St. and other areas within the district but again, I guess it's fine as long as our downtown looks great!!