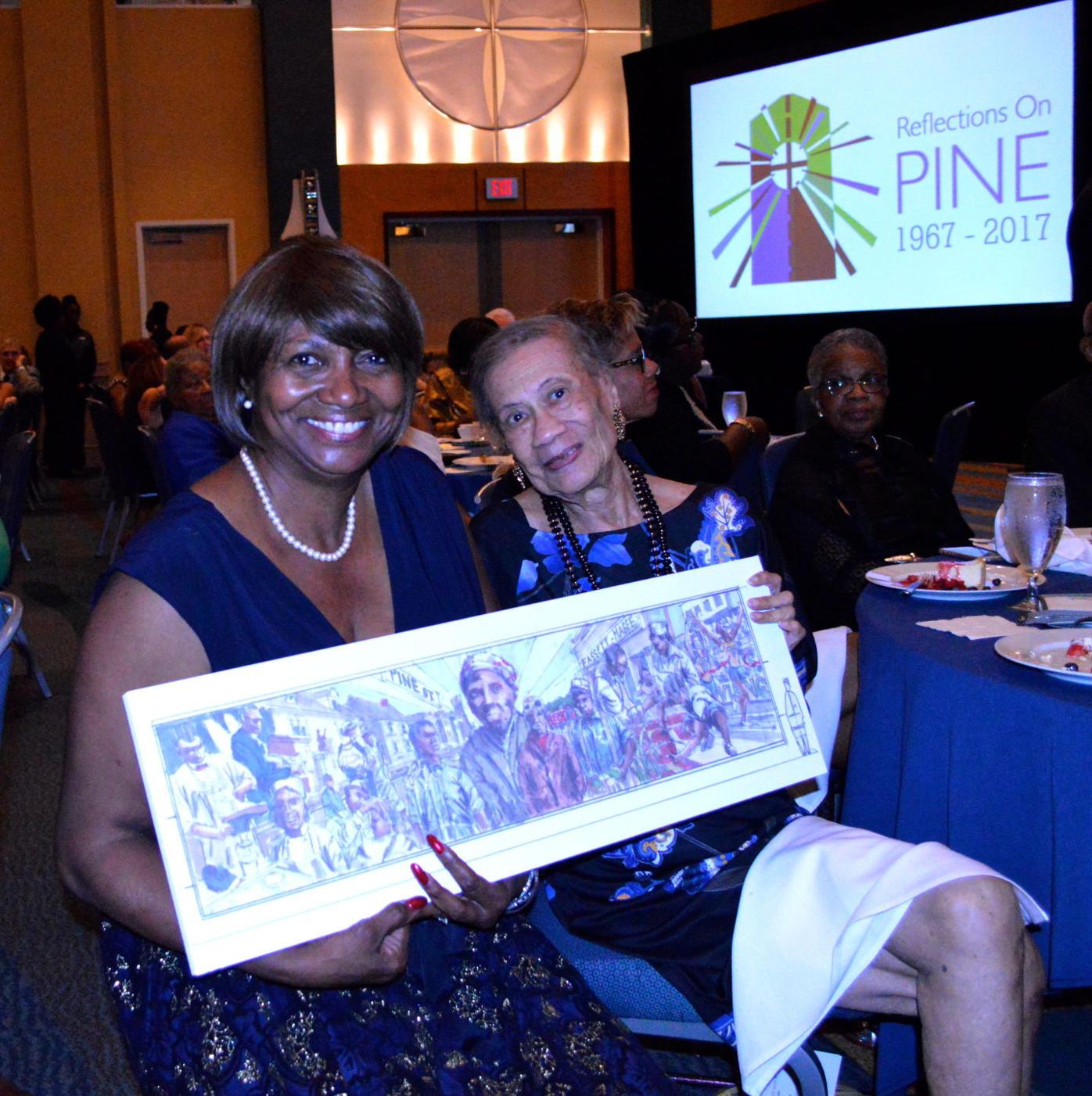 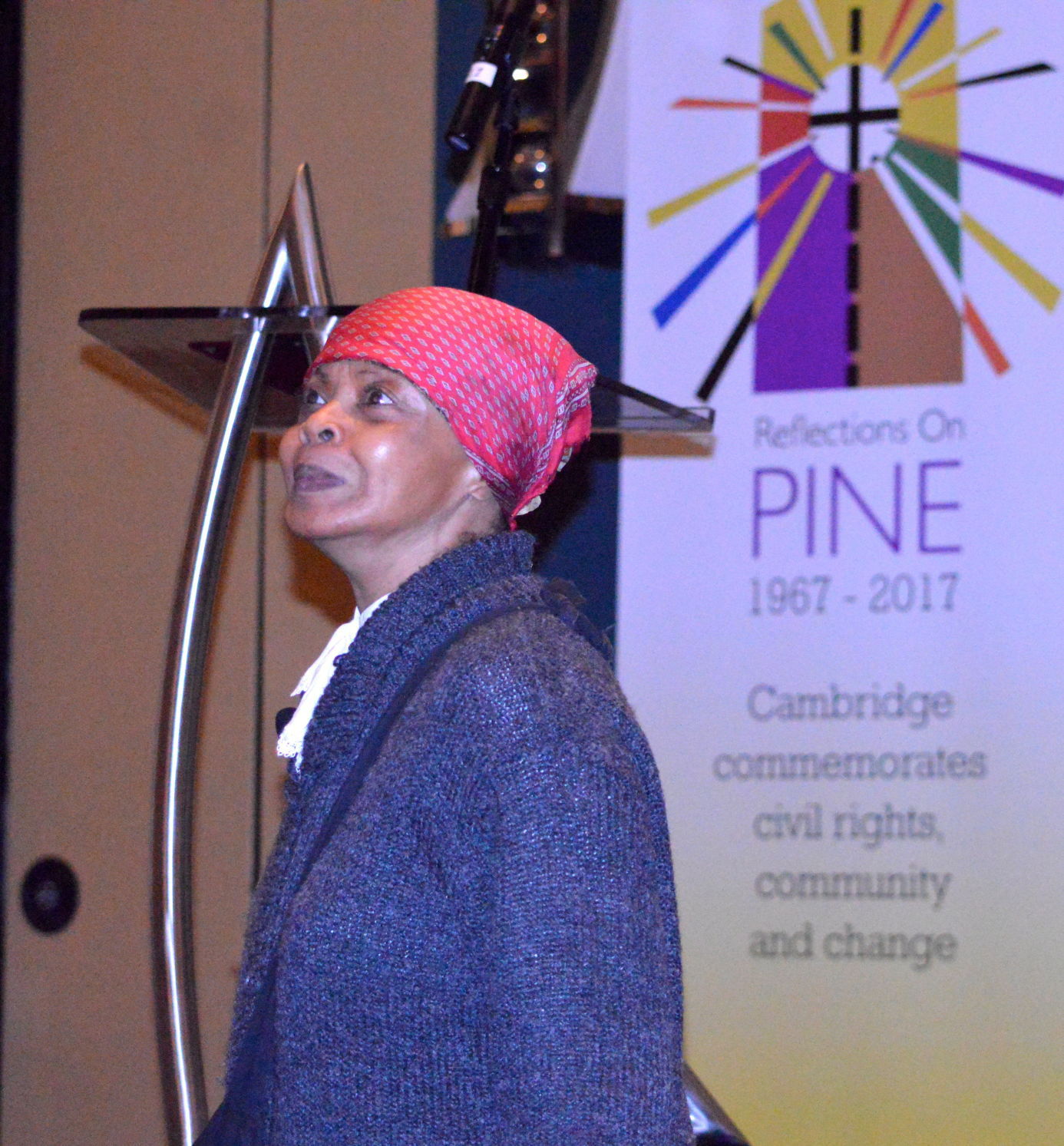 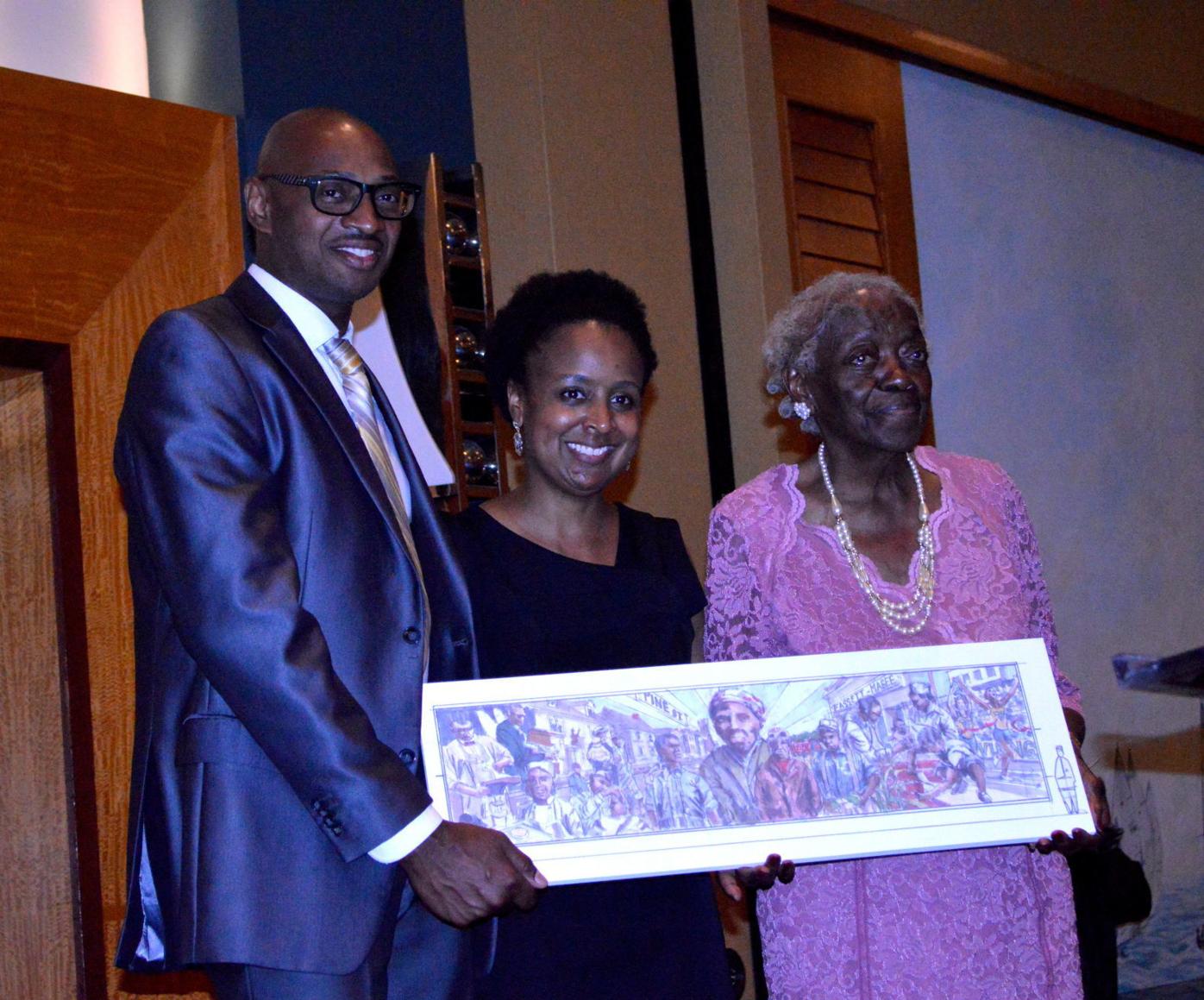 Betty Jackson, right, the wife of the civil rights leader Fred Jackson, receives a print of the Cambridge mural celebrating the city’s African-American history during the Reflections on Pine Gala Friday, July 21, in Cambridge. Eastern Shore Network for Change co-founders Dion Banks and Kisha Petticolas presents Jackson with the print. 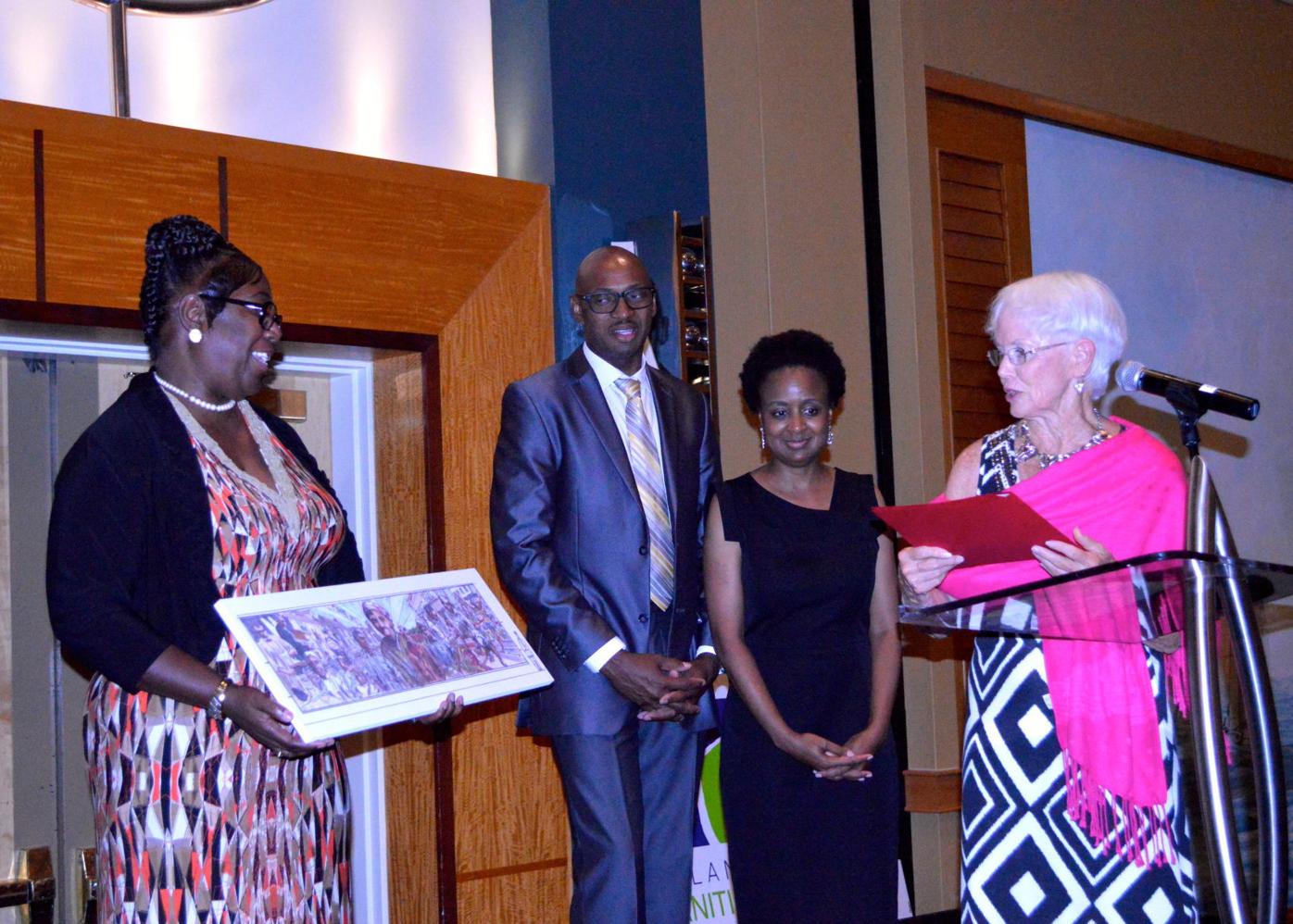 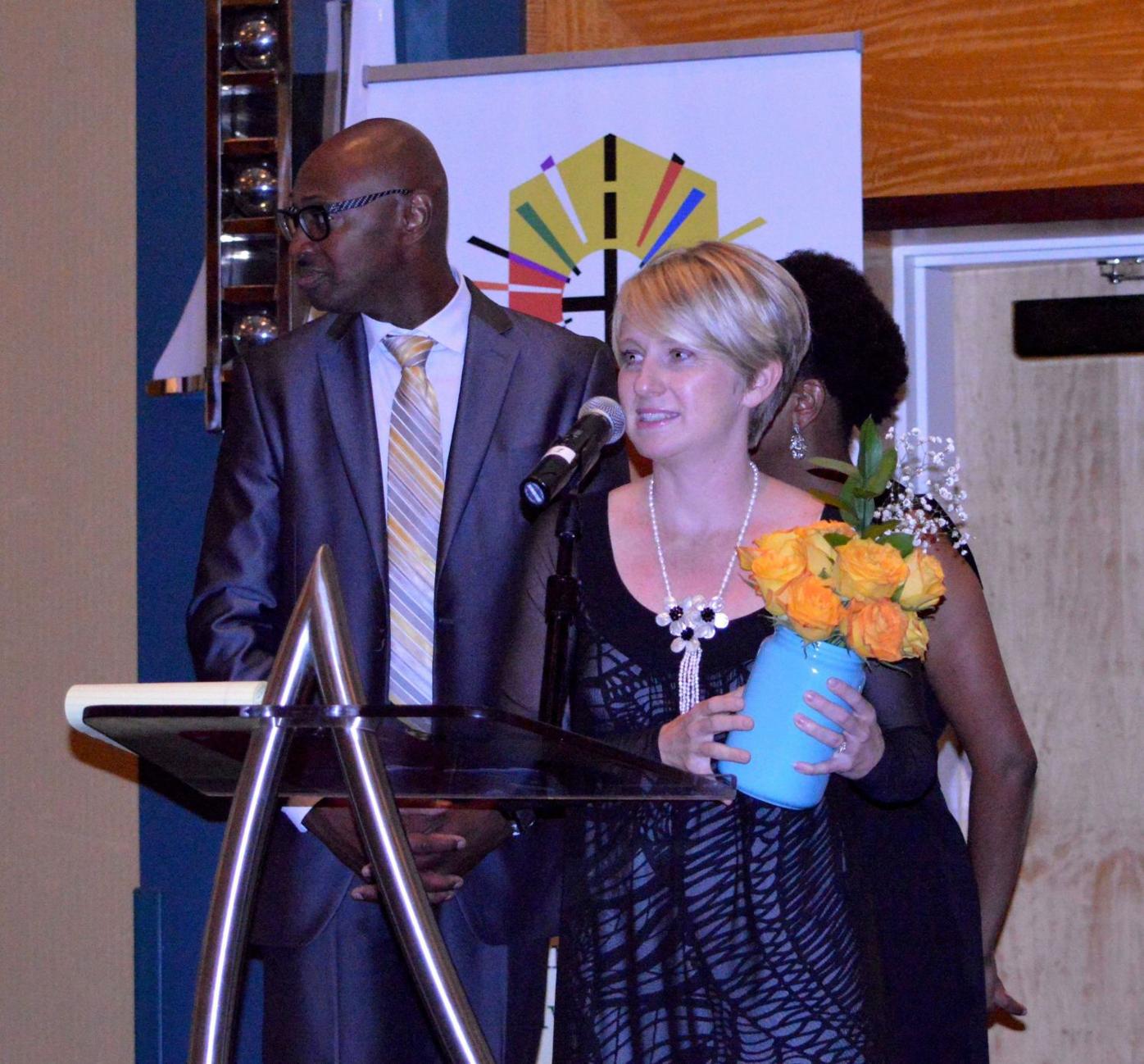 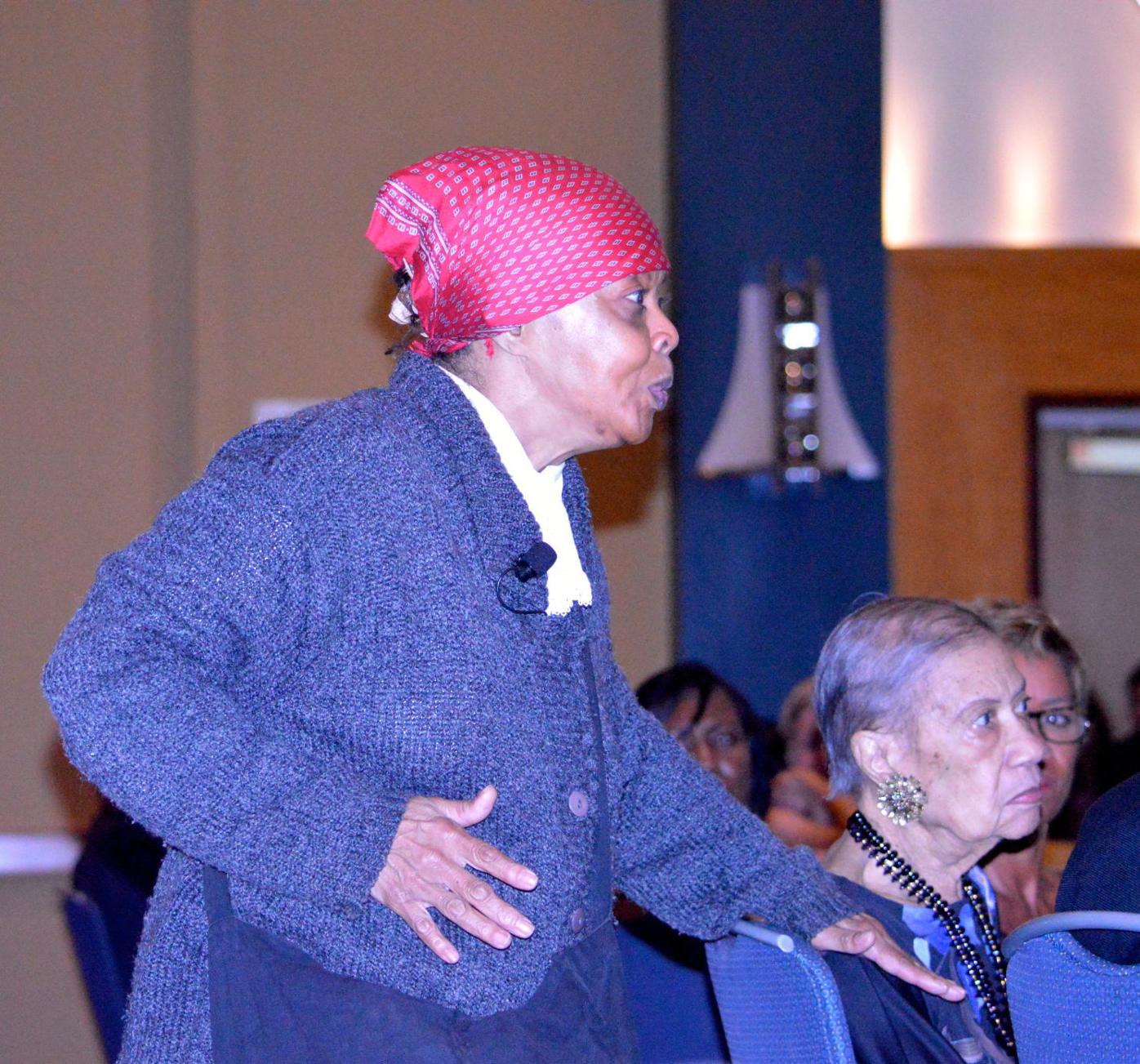 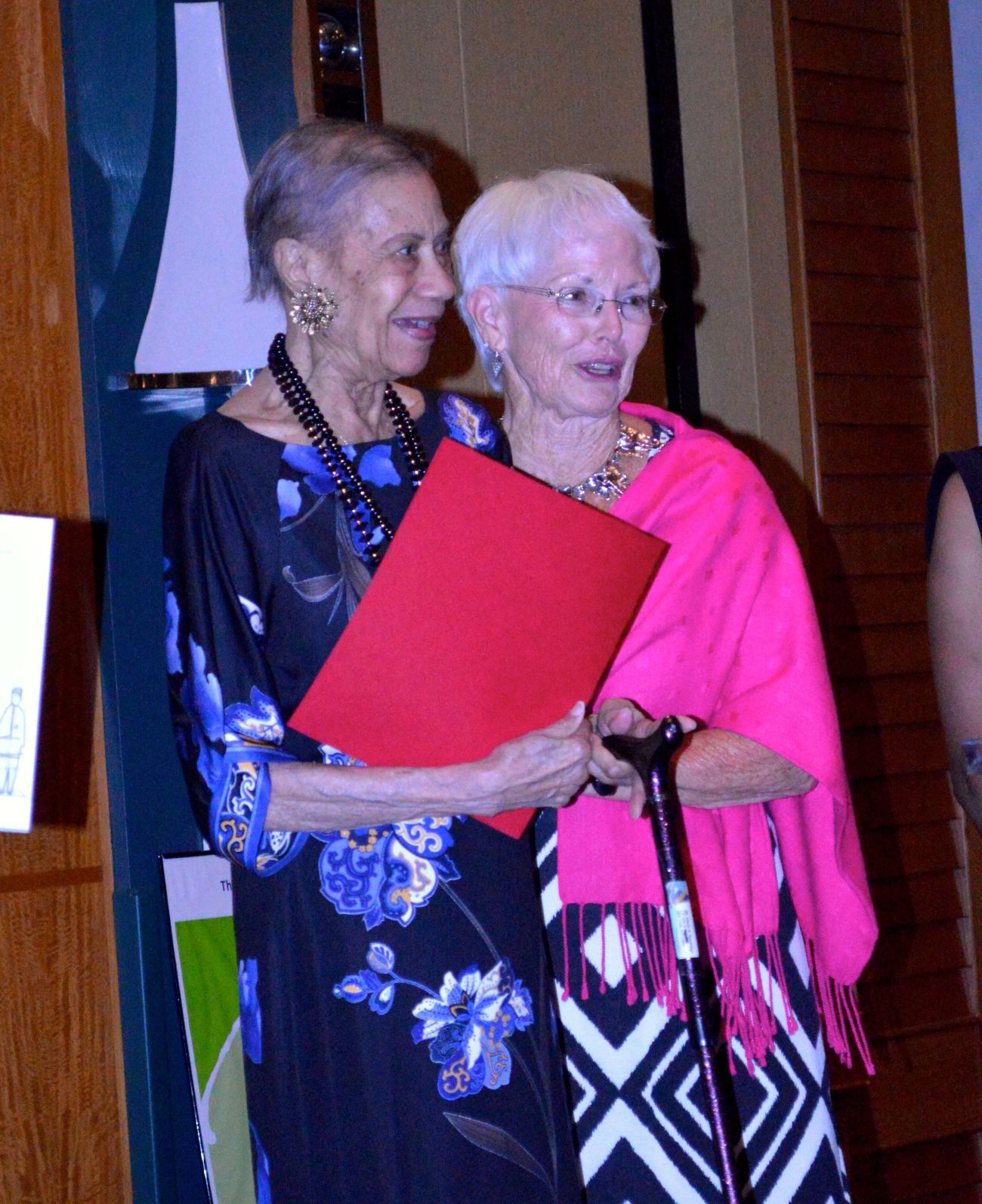 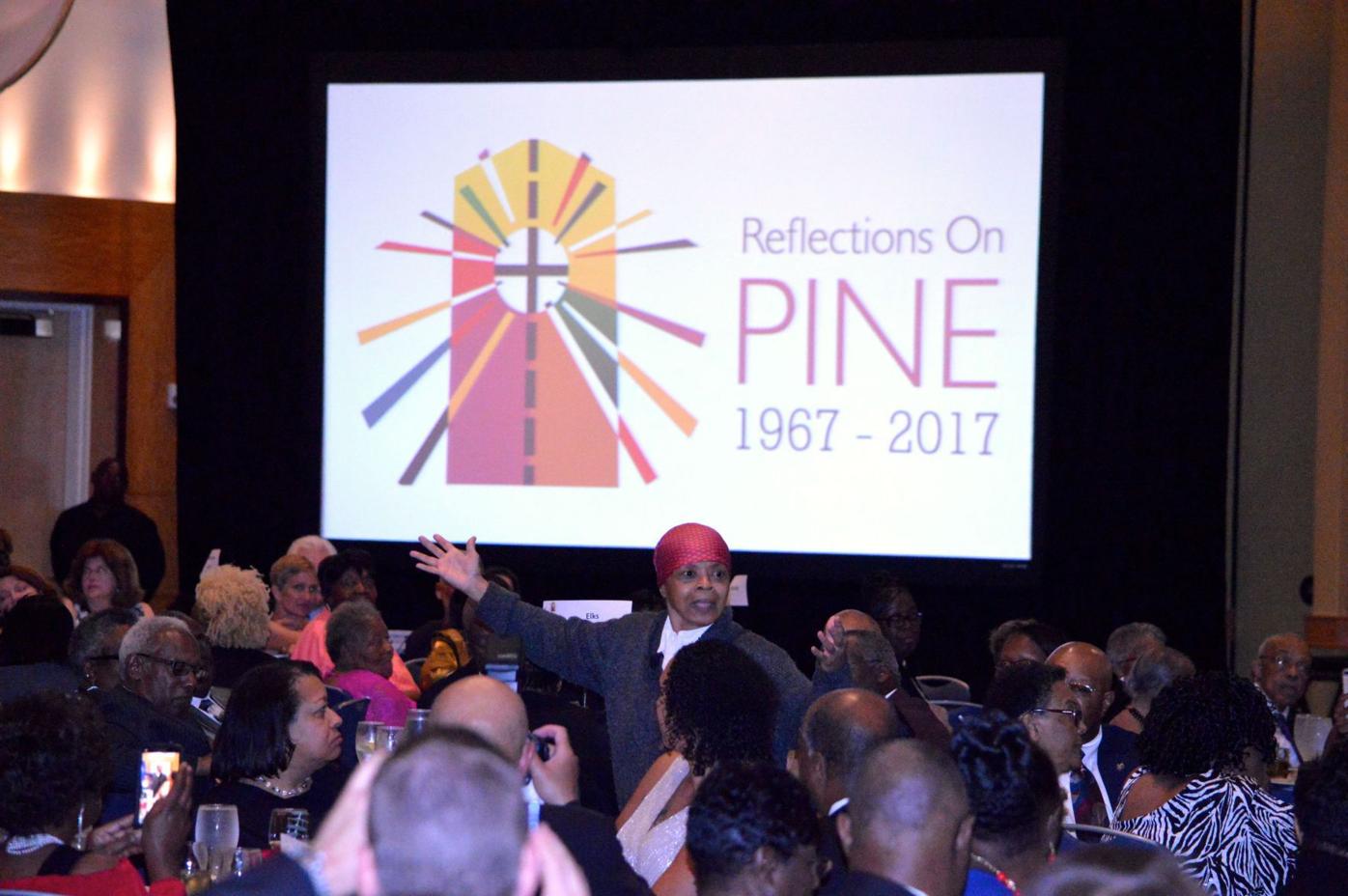 Betty Jackson, right, the wife of the civil rights leader Fred Jackson, receives a print of the Cambridge mural celebrating the city’s African-American history during the Reflections on Pine Gala Friday, July 21, in Cambridge. Eastern Shore Network for Change co-founders Dion Banks and Kisha Petticolas presents Jackson with the print.

CAMBRIDGE — As part of the four day Reflection on Pine event, organized by the Eastern Shore Network for Change, a gala dinner was held on Friday, July 21 to honor four individuals who challenged the status quo in Cambridge, today and in generations past.

“Everybody in the room, really, has played a part in this, because this is an incredible opportunity that we have to rewrite history,” state Sen. Addie Eckardt, R-37-Mid-Shore said of the occasion. “I’m so pleased that we have such fine leaders among us who are willing to stick out their necks. We may get a lot of criticism, but that’s okay. Respect all those words, because if it doesn’t come out, it can’t heal. That’s what it’s all about. We need to learn to move up and out of the ashes.”

The ballroom of the Hyatt Regency Chesapeake Bay was full as each of the honorees, or a representative, was presented with an artist’s concept of the mural that was installed on the corner of U.S. Route 50 and Maryland Avenue, and citations from the Maryland Senate and House of Delegates.

Patricia Hawkins, a descendent of Tubman and representative for the Ross family, accepted the honor on behalf of her family.

Tubman’s legacy was commemorated earlier in the year with the opening of the Harriet Tubman Underground Railroad Visitor Center and accompanying state and national parks. The visitor center is located in Church Creek, just outside of Cambridge, adjacent to the Blackwater National Wildlife Refuge.

Richardson Dandridge was in attendance to accept her honor in person.

“She is brave, strong, and a warrior. At 95 years old, she is still all of those things,” said Kisha Petticolas, ESNC co-founder. “We are humbled and filled with gratitude that she would come here to receive this honor.”

Jackson’s honor was accepted by his wife, Betty Jackson, who briefly expressed her gratitude.

Mr. Jackson became very involved in the civil rights movement of Cambridge, under the leadership of his friend Gloria Richardson. He was known as the lieutenant of the Cambridge movement. He attended many CNAC meetings, marches, and was always up front with Richardson.

Mr. Jackson was fired from several jobs because he was such a prominent part of the movement, but he continued to support his family through any odd job he could find. In 1968, he became a truant officer for Dorchester County Public Schools, and he was well known for his efforts to ensure that the county’s students attended school regularly. He passed away on December 5, 1984.

Mayor Jackson-Stanley, daughter of honoree Fred Jackson and wife Betty, and first female Mayor of Cambridge was there to accept her recognition.

“I want to thank Dion and Kisha for their vision and fortitude,” said Jackson-Stanley. “I’m so glad that our young professionals have stepped up to the plate and said, ‘We are going to carry the torch.’”

It was during Jackson-Stanley’s second mayoral campaign that ESNC co-founders Dion Banks and Kisha Petticolas met, and their vision for the future of the Cambridge community began to develop.

“I’m standing on the shoulders of Harriet, Gloria, Fred, my momma Betty Jackson, my cousin Marion, and so many other people,” said Jackson-Stanley. “In 2008, I was told it was mine to lose, and my ‘shero’ Gloria (Richardson), I was told, said ‘Is she crazy?’ But in 2009, the first black, female mayor gave her ‘shero’ the key to the city for the first time. I was so proud and humble and grateful.”

Also recognized was Dorchester County Tourism Director Amanda Fenstermaker. She was given much of the credit for ensuring the mural along Route 50 was made a reality.

“I don’t feel like I deserve this, but it truly is an honor to have received this, and to be here with you all,” said Fenstermaker. “The mural is beautiful. It’s exceptional, more than I imagined it would be, in its beauty and what it offers for the love of our community. I hope that we can continue to make progress and have forward momentum.”

The weekend of events continued with a Community Conversation on Race, a scenic bike ride, a 5k “Race Against Racism,” and a community church service in an effort to desegregate the most segregated hour in America.

“We realized we didn’t have any control over our own narrative, but we have it now,” said Banks. “This is our story. This is our narrative. This is where our kids, their kids, are going to grow up. The only way that we’re going to be a self-sustaining community is by having healthy conversations where we meet people where they are and validate how they feel. We create that platform and grow from there.”