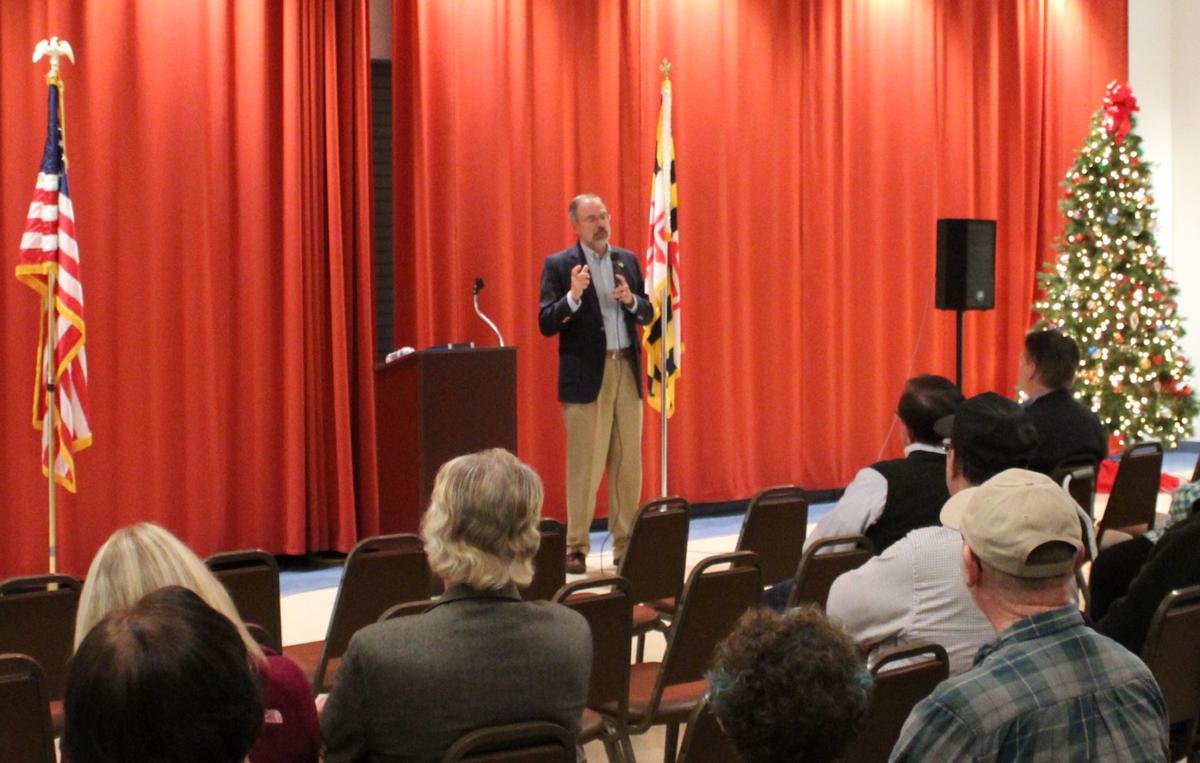 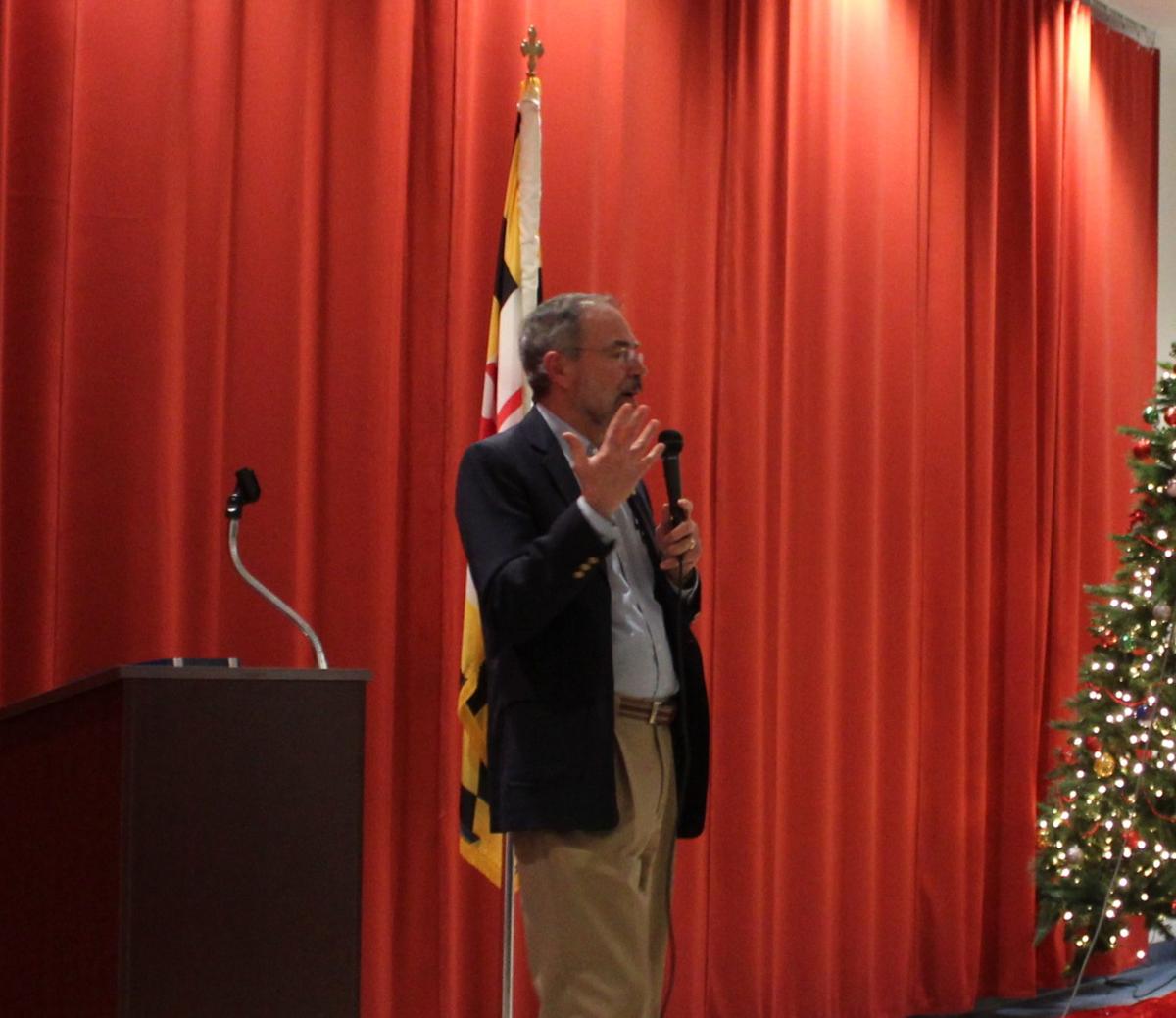 “Enforcement of current gun laws should be the focus rather than enacting “feel good laws” that lawmakers could boast about passing but that had little positive practical effect.”

CAMBRIDGE – Congressman Andy Harris (R-1st District) answered questions and listened to his constituents’ comments at a Town Hall on Monday evening, Dec. 30 at the American Legion in Cambridge. Among those top concerns, second amendment rights, school discipline, and sanctuary county laws. The town hall format allowed for comments and questions from concerned citizens.

Harris spoke critically of the impeachment recently passed by the House of Representatives. He questioned the delay caused by the House’s Democrat leadership to delay sending the articles of impeachment to the Senate due to not yet selecting managers as part of the process. Harris speculated that the delay was due in part to the fact that Democrats in the House did not want to address the controversy before the holiday break.

Multiple town hall participants asked questions about and made statements opposing red flag laws for firearms. Red flag laws allows for authorities to temporarily take firearms from someone who is deemed to be a threat to themselves or others.

Harris said that he fully supports the conclusion of the Heller decision handed down by the United States that the right to possess firearms is an individual right rather than a collective right held by a government sanctioned militia, and he said that the current red flag law prototypes would take away the constitutional rights by ex parte legal proceedings, proceedings in which the subject of a judge’s temporary ruling is not permitted to take part, and in Harris’s estimation, is therefore denied their constitutional right to due process.

Harris said that mass shooting deaths are tragic, the numbers of people killed are far exceeded by the number of death from gun crimes that already violate existing laws intended to prevent such crimes. He continued with the assertion that enforcement of current gun laws should be the focus rather than enacting what he called “feel good laws” that lawmakers could boast about passing but that had little positive practical effect.

He said that outside of any federal consideration that Maryland’s state red flag laws should be reviewed in terms of how many complaints turn into temporary confiscations, and how many Marylanders that have guns taken from them by a judge, receive mental health treatment.

Harris answered a question on whether Congress could pass a law that would expand reciprocity for out of state firearms carry permit holders by saying that he thought that an agreement on reciprocity from the legislature was unlikely, but he pointed to an upcoming legal challenge that could make reciprocity agreements more uniformly applicable.

One town hall participant questioned Harris on whether he supported sanctuary counties.

“To me that’s not the solution,” said Harris, who continued saying, sanctuary laws of any kind “put law enforcement in a bad situation” where they are asked to selectively enforce laws.

Another questioner asked about the possibility of the Maryland General Assembly extending background check requirements currently on handguns to long guns. Harris pointed to the percentage of crimes in Baltimore committed with long guns versus concealable weapons that current federal and state background checks and other firearms restrictions currently prohibit.

One attendee asked Harris what his solution to the extreme partisanship in Congress, asking “What is it going to take for you [Congress] to get rid of this partisan pettiness?” Harris said the first part of the solution was independent redistricting committees. He said his district, the 1st Congressional District of Maryland, extends from Pocomoke on the lower Eastern Shore to the Frederick County line, a layout he said is intended to include isolate as large a portion as possible of Republican voters at the expense of the district’s compactness and geographical continuity.

Harris said that a more equitable districting would make districts more competitive, and more moderate. He said that because the First District is drawn so heavily Republican, the primary is likely to advance a more staunchly conservative candidate rather than a moderate, who then in turn doesn’t face a real challenge in the general election. Harris said the flaw in the partisan districting process shows that despite re-electing a Republican governor, Maryland voters only elected one Republican Congressman out of eight seats statewide. As a result, “Congress doesn’t look like American, it looks like primaries,” said Harris, who added that even though the system favors him in his district, “I don’t think it’s fair.”

The second part of reducing partisanship is for voters to stop responding to what he called political attack ads. Harris said that aggressive political advertisements frequently mischaracterize candidates’ good faith efforts to discuss difficult and controversial topics, but their ideas are attacked and the dialogue often then becomes personal.

He cited the issue of H2B visas as an example of a locally important policy question derailed by the larger controversy over immigration. Harris said the temporary worker visas are an excellent solution in the current low unemployment labor market for seasonal labor needs for seafood and agriculture. He said the contribution in payroll taxes and the fulfilling of the need for workers makes the H2B visas a good thing, but partisanship prevents an easy solution.

Harris answered questions about the conditions in schools that teachers and others say is dangerous and harmful for students, referring to a recent study that a majority of students and teachers in Maryland public schools felt unsafe. Harris reflected on his time on the education committee in the Maryland State Senate, recalling a discussion with school officials that favored instituting a uniform policy as part of an overall plan to improve the environment in the school but who were reluctant to institute the policy due to a fear of being sued. “You have to implement discipline,” said Harris, who advocates for disruptive and dangerous students being removed from classrooms as part of a policy to “promote the common good” for students. He said the removal of disruptive students and the difficult question of where they should then be placed requires bold boards of education who are determined to solve the problem.

Harris discussed the recent appropriations bill that passed with the specific inclusion of snakeheads as an invasive specific. He said that while the resources included in the bill were far from sufficient to remediate the invasive species from local waterways in Dorchester and elsewhere, that it was significant that the species was one of two specifically named.

Another attendee asked Harris about concerns about transportation being provided for veterans to their appointments and treatment at the Veterans Administration. Harris reflected back to his residency at a VA facility, and said that staff members put the ease of their own scheduling over veterans’ needs. He said that both contractors and VA personnel must put the needs of veterans first and promote the mindset of “the customer is always right.”

Harris also addressed questions on entitlements such as social security and food stamps, stating that Congress must make sure that obligations to Americans are being met while maintain solvency in the future.