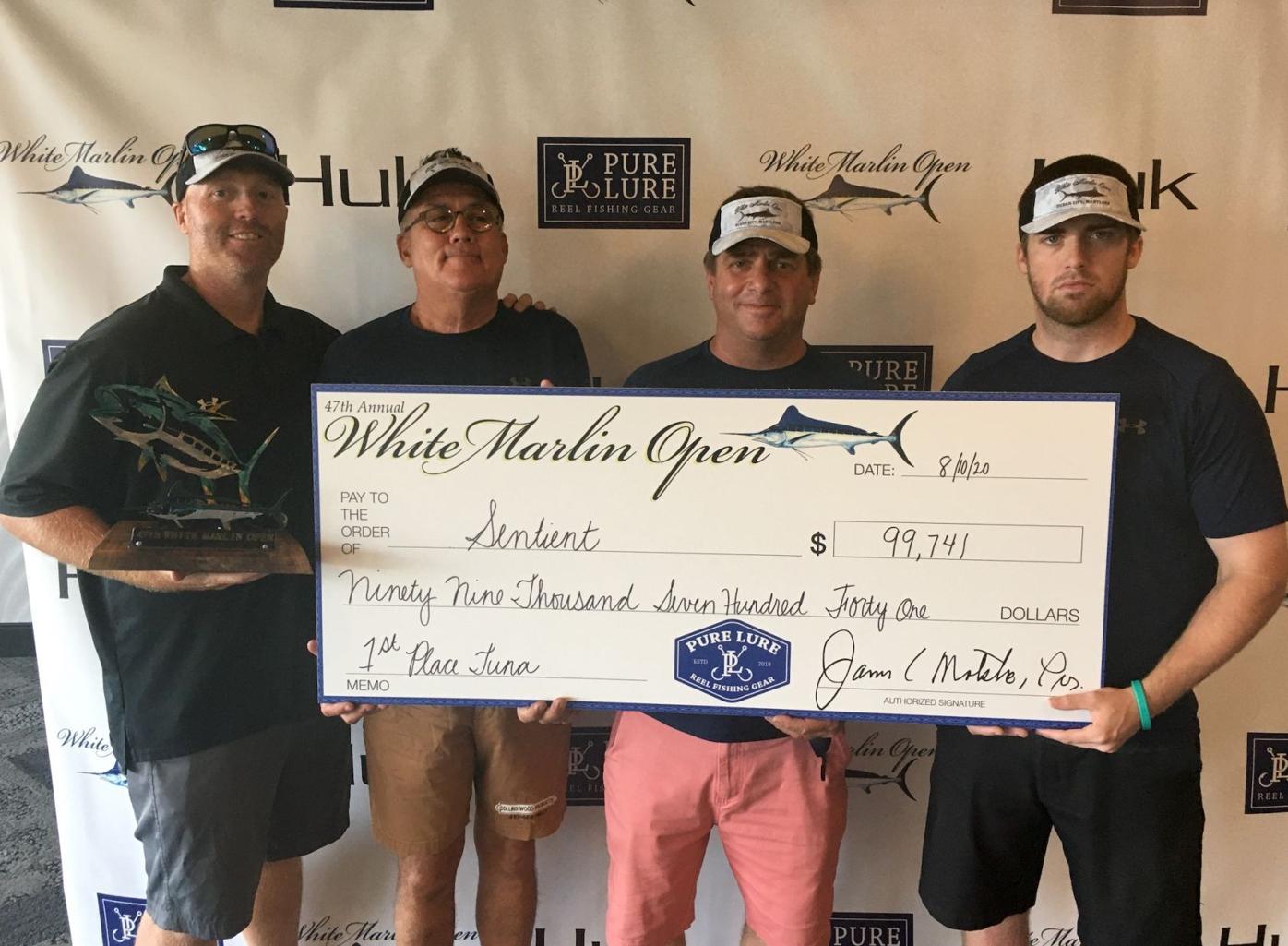 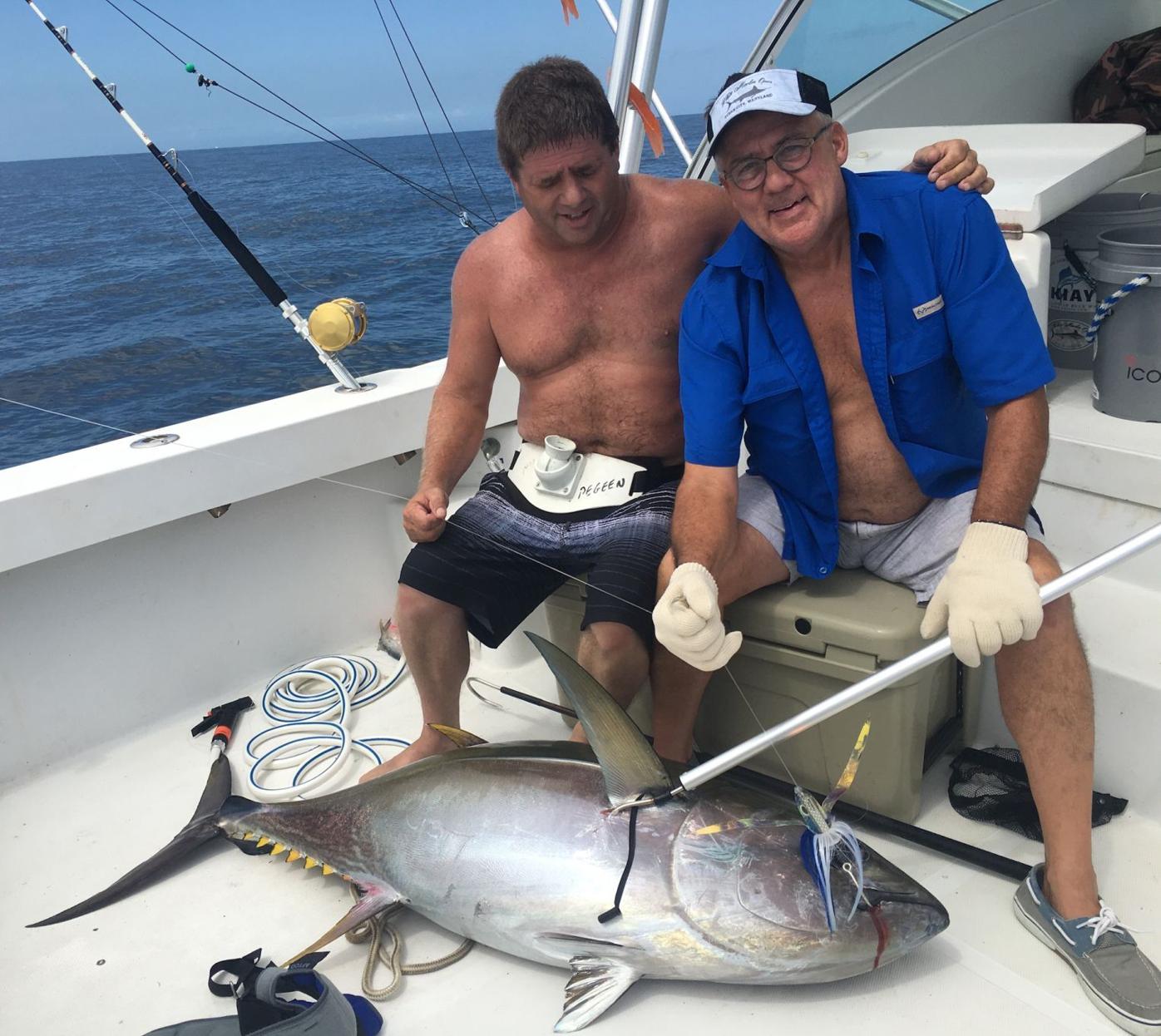 Captain Frank Whirley, left, and crew member J.C. Collins pause for a breather after Whirley reeled in the 121 lb. monster during action in the Atlantic in the White Marlin Open. 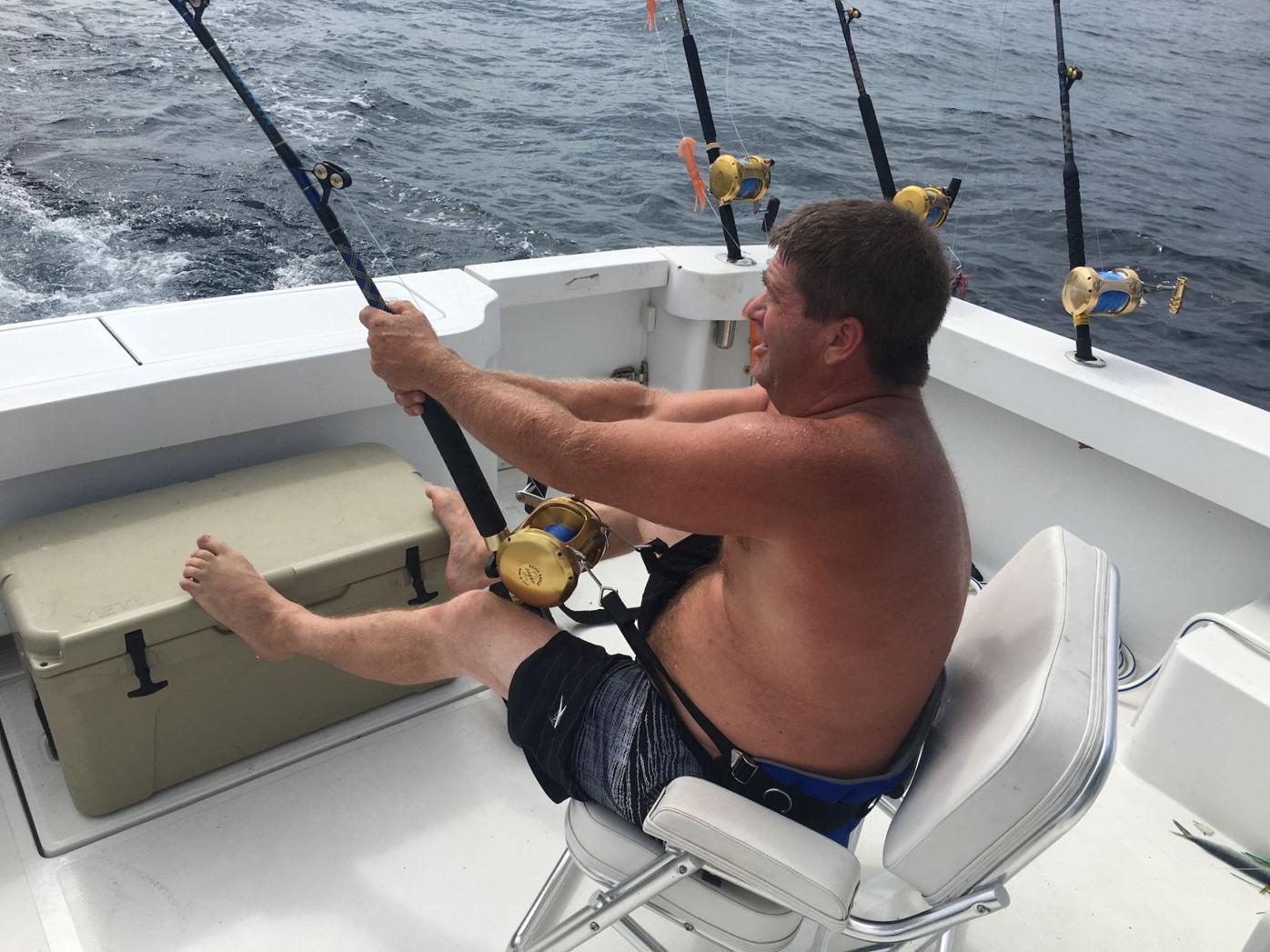 Frank Whirley reels in a 121 pound tuna during the White Marlin Open. 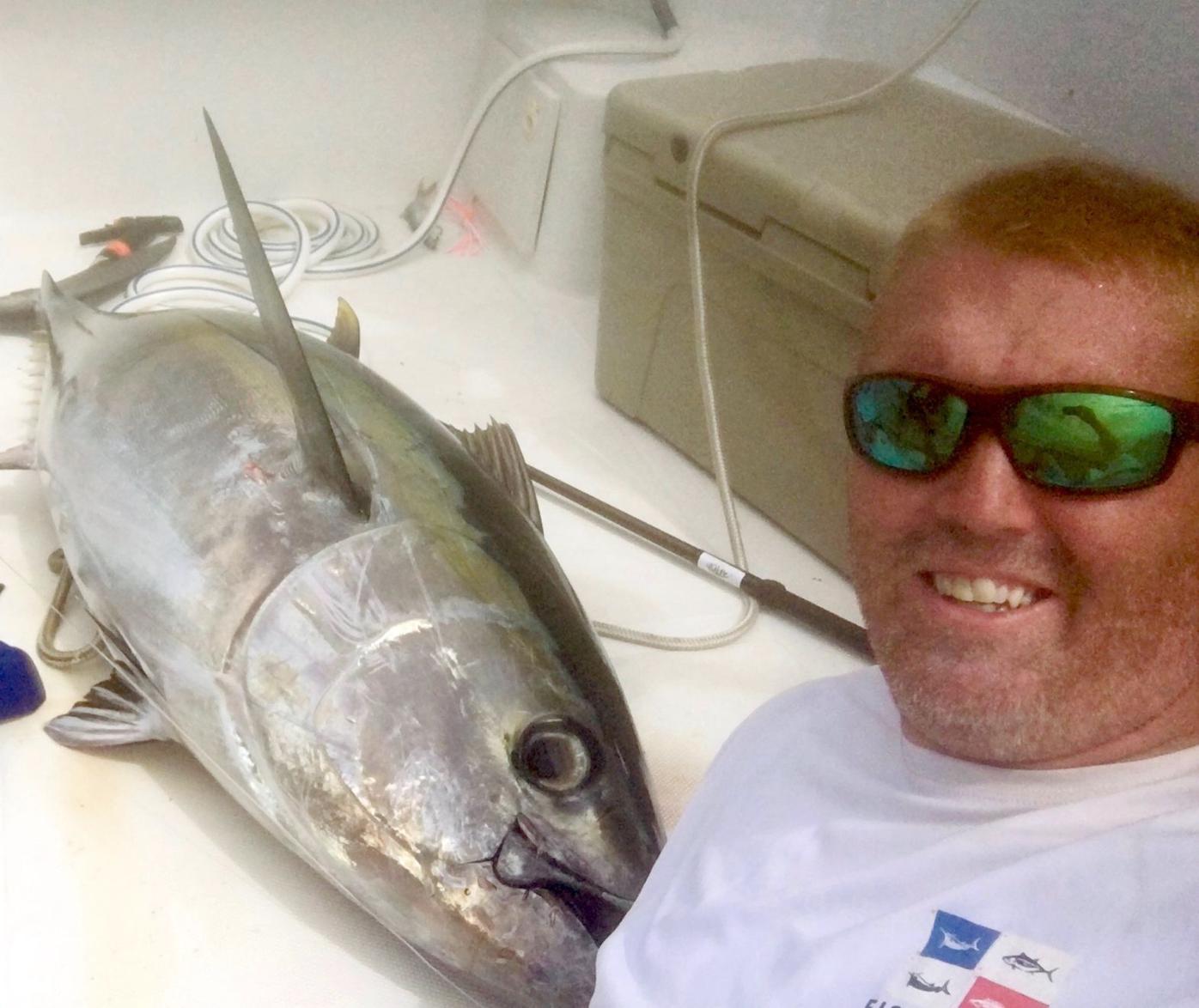 Sentient crew member Jake Coleman poses with the tuna that went on to top the category in the White Marlin Open tournament. 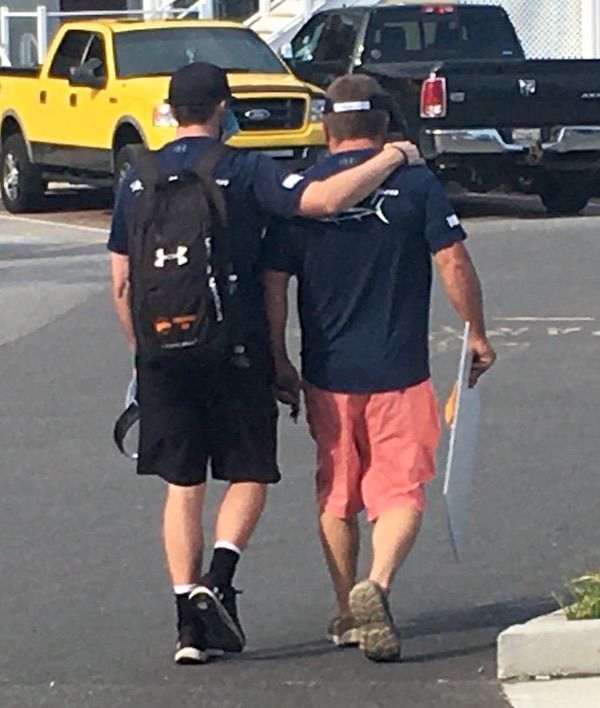 CAMBRIDGE — Sometimes the underdog gets the big fish. Frank Whirley, a construction supervisor who resides in Cambridge, captained his boat and crew to a big win in the tuna category at the White Marlin Open Tournament in Ocean City last weekend. The close of the tournament on Sunday, Aug. 9, brought the prize of $99,741 for biggest tuna for the 121 lb. fish that Whirley himself reeled in off the Virginia coast on the morning of Wednesday, Aug. 5.

Before hooking the big tuna, Whirley and the 32-foot Sentient had a long and sometimes unlucky journey to the ocean above the Norfolk Canyon on the Wednesday morning at the beginning of the tournament.

Whirley had been looking for years for the type of boat that he found at a repo sale. His love for fishing, particularly offshore fishing originated when he caught a tuna with his dad off of Pompano Beach at 9 years old (“I was hooked ever since,” Whirley said), and in the five years since buying the Sentient, he fished out of Chincoteague every weekend of the summer.

Whirley had prior experience with the 47-year-old fishing tournament. His dad was on Buster Day’s tournament winning boat in the 1977 tournament (Day boated the winning fish 10 minutes before the tournament ended). Whirley fished the Open with other people, including four years ago with a friend whose boat missed first place in the white marlin category by a quarter of an inch.

A self-described working man who handles all of his own upkeep and rigging duties in addition to captaining the Sentient, Whirley finally had his boat ready for White Marlin action when it blew a motor shortly before the tournament. He scrambled to get the boat back together this season, and had done well fishing the spot at Norfolk Canyon for three weeks prior to the tournament, including temporarily boating a white marlin. Whirley was headed out at full throttle when the anchor winch broke and released the anchor and rope that subsequently got fouled in his propellers, which required a diver to go underneath the Sentient to make repairs.

When he bought Sentient, Whirley never considered a name change, as he believed the old timers when they told him that renaming a boat is bad luck. Despite sticking with the name, as the mishaps piled up, people began to speculate that maybe the vessel had some kind of bad karma. Whirley disagreed. “A boat’s a boat,” he said. He felt like it was his year — he just turned 50, and his wife, Bonnie (who Whirley said is, “a great enough woman to understand fishing is what I love to do”) agreed and encouraged him to fish in this year’s Open.

Whirley did not buy into the idea that there might be some kind of curse, but he decided not to take any chances, and when a storm was brewing, he decided to spend the night aboard in the cabin. That precaution paid off in the wee hours of Tuesday morning, when the 65 and 70 mile per hour winds broke the moorings on the adjacent boat. “It would have sunk both boats,” said Whirley, who struggled with the harbormaster and others in the dark, wind and rain to secure the other boat. The effort came with a price, as during the stormy struggle, a cleat struck Whirley on his right sight, cracking a rib.

The Sentient‘s captain was unsure about his ability to participate, but a test drive convinced Whirley he could do it. Whirley still felt like this was his year, and although his son Frankie could not fish with him the first day due to work obligations (“work comes first — fishing is just play for us,” said the elder Whirley), he was joined by J.C. Collins, who lives in Hurlock and docks his boat next to the Sentient at Slaughter Creek during the off season, and Jake Coleman, a high school teacher and football coach at Stephen Decatur High School who grew up in Cambridge, and taught and coached for years at Cambridge-South Dorchester High School. “Jake, I’m going to give it a go,” he told Coleman on the phone.

“You know I’m lucky — we’re going to win this,” Coleman told Whirley as he came aboard the Sentient on the morning the tournament kicked off. Whirley said he laughed and told Coleman, “I tied everything myself, it’s your luck and my skill.” He pointed to the longest rod on the boat, “If this one hits, we’re going to the scale.” About an hour and a half into fishing, two rods hit at the same time. It soon became clear which rod, that longest rod, had the bigger fish on the line.

Once an angler gets a fish on the line, the White Marlin Open rules strictly forbid anyone else touching the rod or reel. The measure levels the playing field to allow smaller boats like the Sentient with a crew of three or four to compete with a boat twice the size and ten anglers who could take turns and reel in a big fish more aggressively and effectively. Whirley, with ribs that had been injured saving his boat in the storm, had grabbed the long rod with the big fish, and if he was going to land the fish, no one else could help.

During the fight, the fish surfaced next to the boat. The crew and tuna were eye to eye. “There’s no doubt that when he [the tuna] saw the boat, he said ‘not today,’” said Coleman. The fish dove deep and directly away from the boat. J.C. Collins, who has a boat similar to the Sentient, drove the boat expertly during Whirley’s ongoing battle, keeping the line in just the right spot off of the stern and the fish changed position. Collins had the added challenge of another boat fishing close enough to almost cut the line at one point.

The Sentient‘s streak of misfortune was not quite over, and the difficulty Whirley’s injury imposed on him fighting the fish was exacerbated when the fighting chair broke. Whirley put the base of the rod, bent into a “u” shape by the tension on the line, onto his hip. He stood up and yelled for Coleman to grab the rod holder belt, and when Coleman put it on him, he gathered his waning strength to muscle the butt of the rod into the holder. He missed. The injury and the fight of the over 100 lb. tuna caused him to miss the rod holder belt and the butt of the rod jammed into his other hip, bruising it.

Coleman, ever the coach and competitor, said he shouted encouragement to Whirley as he was bent over, almost defeated. He was out of options and almost out of energy, but the Sentient‘s captain broke the streak of bad luck with sheer willpower, manhandling the base of the rod in the holder, giving himself the accommodation that he needed to finish reeling the big fish to the boat.

After an hour and ten minutes of fighting, it was time to land the tuna. Whirley reeled it to the boat, and Coleman gaffed it. “It was the best gaff shot you could ever ask for,” Whirley said. After the crew boated the big tuna, the crew celebrated. Coleman said that Whirley was laughing and crying at the same time, and raising his fists in the air, “like Rocky.”

“It wouldn’t have happened without that team effort,” said Whirley. “It was a great day for me, I’ll never forget it.” Whirley told Coleman that it was like his Super Bowl.

On the three and a half hour ride to the scales at the tournament headquarters in Ocean City, the crew guessed the weight. Coleman was closest with the highest guess, off only 3 lbs. Whirley knew that the tuna was going to be a contender. The scales read 121, good enough for a solid lead. The next four days were stressful as the Sentient’s crew hoped their lead would stand, and as Frankie Whirley joined them, they had good fishing, including a white marlin, but nothing that would place.

For Coleman, the monetary prize, while important, was not his top concern. “It wasn’t about the money, it was watching this man’s dream come true,” he said. The fish was big enough to beat all of the other tuna caught in the tournament, including the second place fish caught by the boat sponsored by Huk (Coleman pointed out the tuna also beat basketball legend Michael Jordan’s efforts in the tournament).

The streak of bad luck may have been snapped, but Whirley said the maxim that “boat” stands for “Break Out Another Thousand” was proven on Sunday during the tournament when the Sentient lost a motor, a repair he has allocated some of the prize money to repair.

As for the tuna, Whirley said his family has been eating it since the Friday of the tournament. “It was the best hundred thousand dollar fish I’ve ever eaten,” he said with a laugh.

“It was a good team — we put our nose to the grindstone and made it happen,” said Whirley, who plans to compete again. “I love the Open, I’ll fish it every year.”

“The underdog has to win every once in a while.”